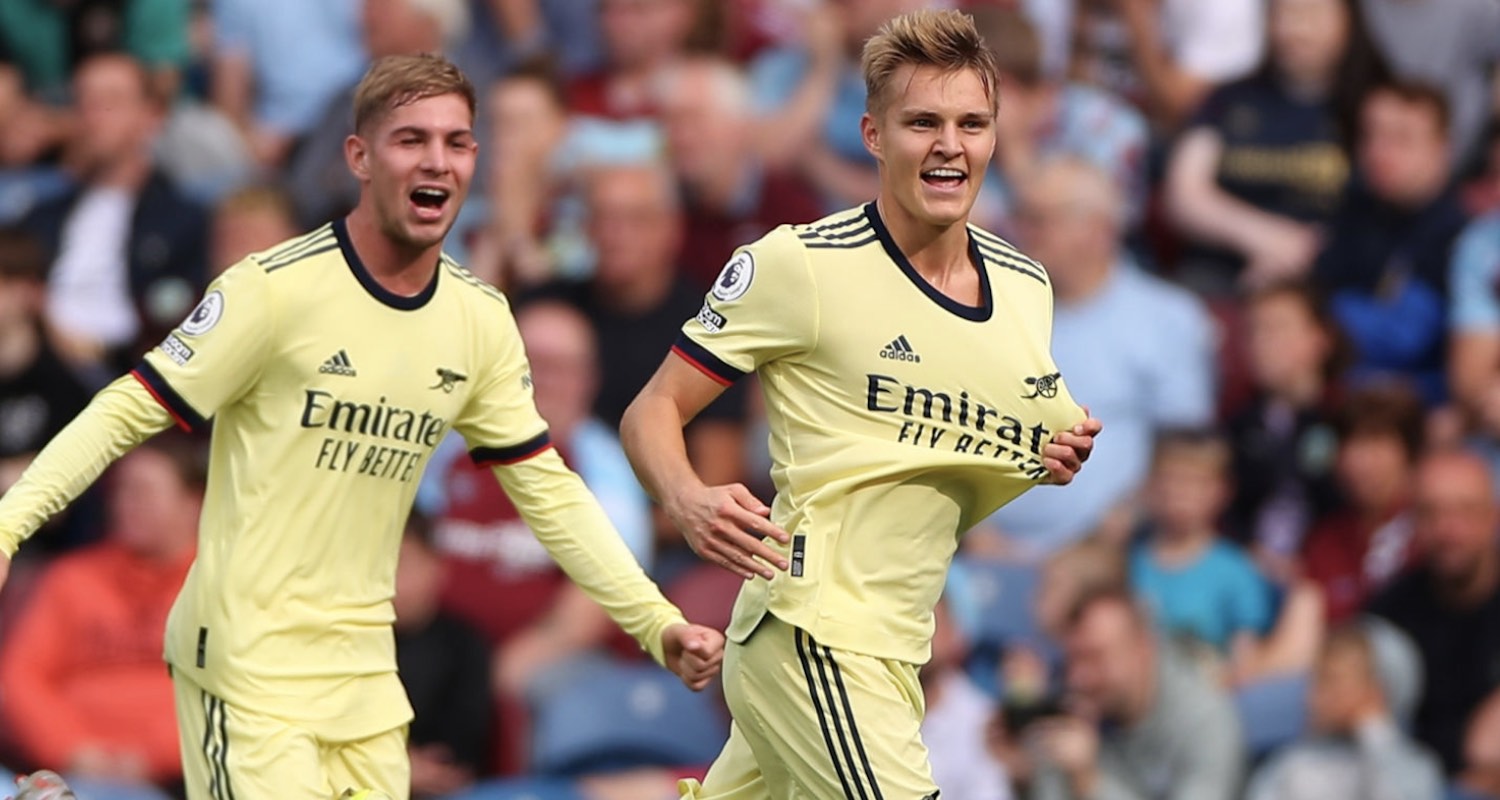 I said in yesterday’s blog I wasn’t sure that Mikel Arteta would go for it the way he did in terms of team selection, selecting Thomas Partey to anchor the midfield with Emile Smith Rowe, Martin Odegaard, Nicolas Pepe, Bukayo Saka and Pierre-Emerick Aubameyang, but he did, and fair play. I don’t think it quite worked the way we might have liked, but it was a lovely show of intent.

There were moments where it could have clicked, more on that anon, but this was a win built on a delicious Odegaard goal, and huge defensive commitment. The stand-out players were at the back, and when you go to Burnley that’s pretty much what you need. You know that they are going to get balls in to their big lumpy strikers with their big lumpy heads, and if you don’t deal with that, you’re going to be in trouble.

Yesterday, we dealt with that very well. In total, the Arsenal back four made a total of 25 clearances as the ball came into the box from all angles, and when it wasn’t cleared, Aaron Ramsdale completely dominated his area and made some excellent takes to alleviate the pressure. His willingness to come and catch rather than punch, was a key part to yesterday’s clean sheet, and with two clean sheets in his first two Premier League appearances he’s had a good start to his Arsenal career.

Ahead of him I was really impressed with Gabriel whose physical presence was vital against the big lumpy lads, and new boy Takehiro Tomiyasu was impressive in his defensive work, winning 100% of his aerial duels. Perhaps he wasn’t quite as tidy on the ball as you might like, but as I said, in a game like this your defensive commitment can’t lapse for a second and he was well and truly up for the fight. Considering this fixture is probably the most physical you’ll encounter, he didn’t look like a man who had just arrived to English football.

Even Ben White, who had some difficult moments, won more aerial duels than the much more impressive Gabriel, so he has some credit for that. Where he fell down was on the ball, and given that the concerns about him were about his competitiveness against this kind of opposition, it might go down as just an off day in that regard. We know his strength is in his his distribution, that was not evident yesterday and it almost cost us, but he played his part in that back four from a defensive perspective.

The back pass which left Ramsdale short was the obvious blooper, thankfully VAR came to the rescue after Anthony Taylor initially gave the penalty, because the keeper saved our bacon by getting a touch on the ball. It was exactly the kind of moment you need to avoid in a game like this, and it was careless, even if he did suggest a very dry pitch played a part. A performance for the former Brighton man to go away and study to make sure it doesn’t happen again.

Further forward, it just didn’t really click in the final third. It wasn’t that we didn’t have opportunities, and I think our lack of bite in this area was more down to not finding the right final pass, poor decision making, and poor execution on a technical level. There were moments where we played that last pass and it was under-hit. We can talk about a dry pitch or long grass, but it was still something we should have done better.

Smith Rowe had a chance to cap off an excellent move but shot tamely at the keeper, he also fired wide when set up by Pepe, and there were two occasions I can recall where a normal first touch from Saka would have seen him with close range shooting chances with just the keeper to beat. He looked off the pace a bit yesterday, perhaps a Euros hangover, or perhaps he just needs that moment to spark his season into life (a North London derby goal, perhaps?!).

To be fair, it was his driving run which saw him cynically chopped down by Ashley Westwood, and Odegaard punished that foul to the fullest extent with the free kick that flew over the wall and into the back of the net. I was a little surprised not to see Pepe over it, as he has some previous from that distance, but one of the things we’ve talked about is the Norwegian giving us more end product, and it was good to see him get off the mark for the new season. More to come, hopefully.

The closing stages were a bit sweaty, as you would expect with a 1-0 lead away from home against a team which is going to aim their big lumpy balls at their big lumpy strikers, but there was nothing clear cut for Burnley and that’s pleasing. I think we should have scored more based on some of the moves/breaks we had that broke down, but a win’s a win at Turf Moor, and I think if you’d offered people a 1-0 beforehand, they’d have taken your hand off.

Afterwards, Mikel Arteta was pleased with how his team defended:

I think the back four in general was really solid. We didn’t concede much, even though they put us under pressure. I thought they were really good. The commitment and the attitude that they showed throughout the game to find a way to win was the most pleasing thing for me, after the game.

I think if you’d said beforehand that we’d win, finish the game with all six summer signings on the pitch, and with a midfield duo of Ainsley Maitland-Niles and Albert Sambi Lokonga, people would have been pleased and perhaps a bit surprised. It’s also worth noting that we finished without either Thomas Partey or Kieran Tierney (cramp), two players who would be considered fundamental to our chances of taking all three points.

Like last week, it wasn’t perfect, but also like last week there were green shoots, things that provide some encouragement. The manager’s team selection was great to see, especially as he has often been so cautious in the past, and the pre-game belief that Arsenal were going to go and get bullied by Burnley didn’t materialise at all during those 90 minutes. They tested us, for sure, but we had the answers, and that was pleasing. I even watched Match of the Day last night!

So, two wins a row, six points, two clean sheets, and we now have a midweek League Cup fixture to contend with before next Sunday’s North London derby. Considering where we were a few short weeks ago, it feels better, so fingers crossed we can continue to build some momentum.

Right, let’s leave it there for now. Have a good Sunday, back tomorrow with more on the blog and a brand new Arsecast Extra.