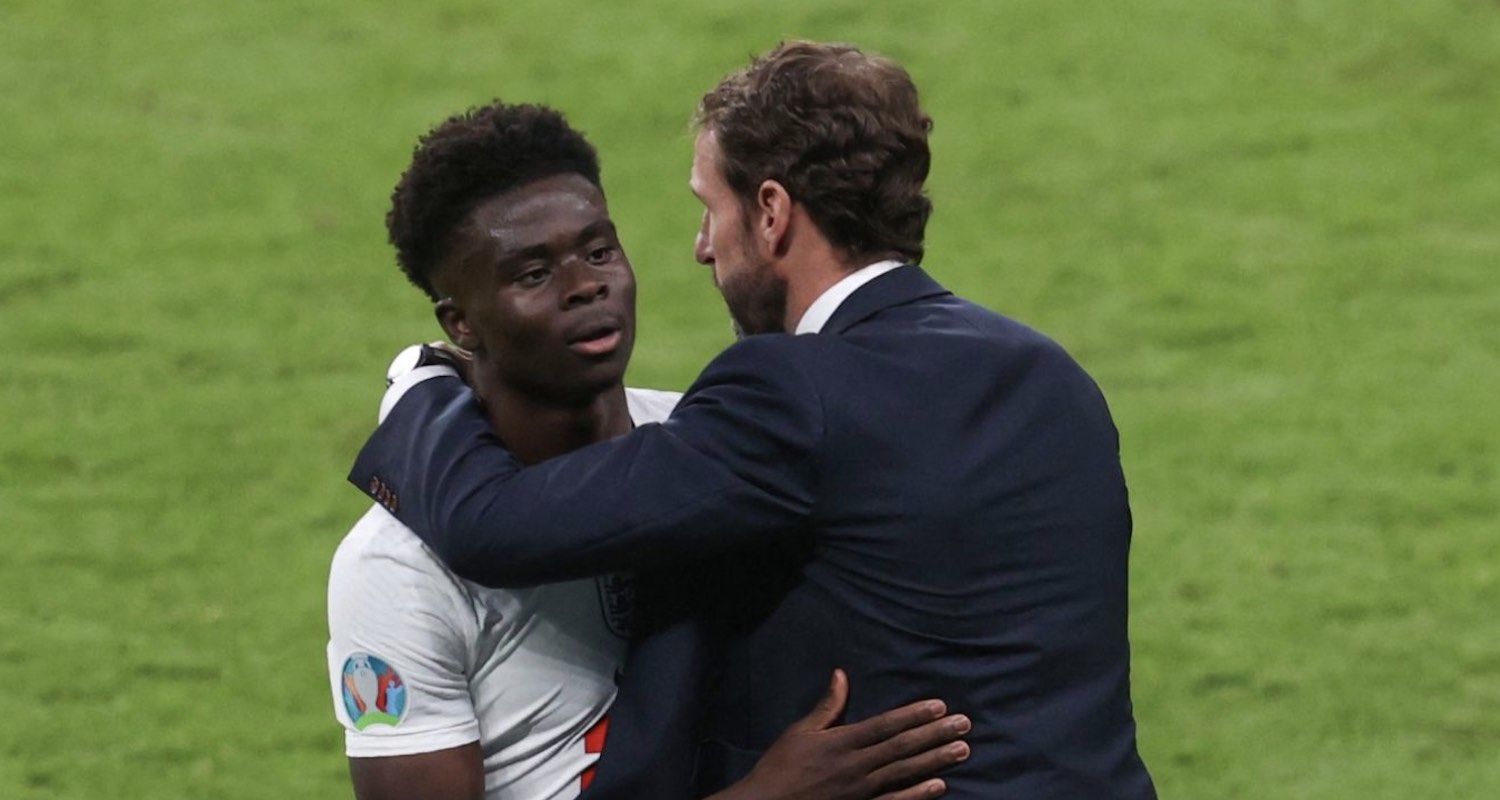 Bukayo Saka started last night as England made it through to the final of Euro 2020 (except in 2021).

The Arsenal man had some good moments, but iffy moments, but as always there was much to like about what he wanted to do. In as much as Declan Rice – the ex-Irish England Elneny – wants to go backwards as much as possible, Saka wants to go forward. It didn’t always come off for him, but I like his intent.

He was involved in an important moment not long before half-time when someone (no idea who and nor do I care to be reminded), played a pass which sent him in behind the Danish defence. From there he played it across goal and it looked as if it was a Raheem Sterling equaliser, but the ball was turned into his own net by Simon Kjaer. Unfortunate for the Denmark captain, but he shouldn’t feel bad, the England man would have tapped it in anyway.

It came after Denmark had taken the lead with a superb free kick from Mikkel Damsgaard. Maybe Jordan Pickford could have done better as it wasn’t in the very top corner, but such was the dip on the ball – and the fact that the England keeper suffers a bit from TRAS (T-Rex Arm Syndrome) – it flew in just under the bar. I think Damsgaard deserves far more credit than Pickford does criticism, and when you see the replay from behind where he gets up and over a jumping wall, then down underneath the crossbar, the execution was superb.

As the second half went on it felt like the physical demands on the tournament had caught up to Denmark. They made 5 changes in the 90 minutes, and finished the game with 10 men having lost another man to injury during extra-time. It really felt like they needed to hang on for penalties; instead England were awarded one during the first half of extra-time.

I thought it was generous, to be honest. Sterling took full advantage of Denmark’s tired legs by driving into the box and running at the defenders, but I think he was already on the way down before the tiniest amount of contact was made. England fans won’t care, of course, but after over the top criticism of Italian gamesmanship in sections of the English media of late, it demonstrated that everyone’s at it. It’s just about how it’s reported and from which perspective. There’s no doubt that England were the better team and looked most likely to score – particularly in the 30 additional minutes – but that doesn’t justify a penalty like that.

VAR backed the referee’s decision though (ignoring the fact there were two balls on the pitch in the build-up too!), and although Kaspar Schmeichel saved the spot-kick, it squirmed out very favourably and the rebound was tucked in to make it 2-1. That always felt like it was going to be enough, Denmark looked absolutely shattered, and when you consider everything they have been through from their opening game through to this one, it’s understandable. I think they can be proud of their team though, who showed character, of course, but also genuine quality.

It sets us up very nicely now for a hell of a final on Sunday. England playing at home throughout the tournament has been an advantage, but to make it through to this stage having conceded just one goal is a testament to how well organised Gareth Southgate’s team are. In some ways I’m glad both semi-finals went to extra-time, to make it kinda even in terms of the physical impact going into Sunday. England didn’t have the stress and adrenaline of a penalty shoot-out, but they will have the Wembley crowd behind them, so I’m really looking forward to it.

In general, this has been a really enjoyable tournament. I wasn’t sure how it was going to play out, after such a gruelling schedule for the players, with uncertainty about the multi-city set-up, and varying degrees of fan involvement. However, the football we’ve been served up has been – for the most part anyway – a lot of fun, hugely entertaining, and in some cases of exceptional quality.

Credit for that should go to the players, the managers and staff, and the fans who have helped make Euro 2020 something a bit special. This shouldn’t be any kind of validation of UEFA though, who have, more than once, shown their true colours – various shades of black, as black as their money-grabbing hearts (if they even have hearts).

I suspect this one which will have a formative impact on many younger fans too, one they remember forever as something which really copper-fastened their investment in the game. I feel old saying this, but I still recall how much the World Cup in Mexico 1986 meant to me. Maybe it was the times of the games, watching late into the evening because of time-differences etc, but in my mind there’s still something magical about the football I watched back then.

After everything that has happened since March last year, the restrictions, the impact on all of our lives in varying degrees of seriousness, it feels like Euro 2020 (except in 2021), is something we all needed (as long as you’re into football). Roll on Sunday, and may the best team win.

Right, that’s it for this morning. Players came back to pre-season training yesterday, so let’s hope some stuff starts happening in the next few days. We can talk about that as and when it does. I’ll be back tomorrow with more on the blog and a brand new Arsecast.