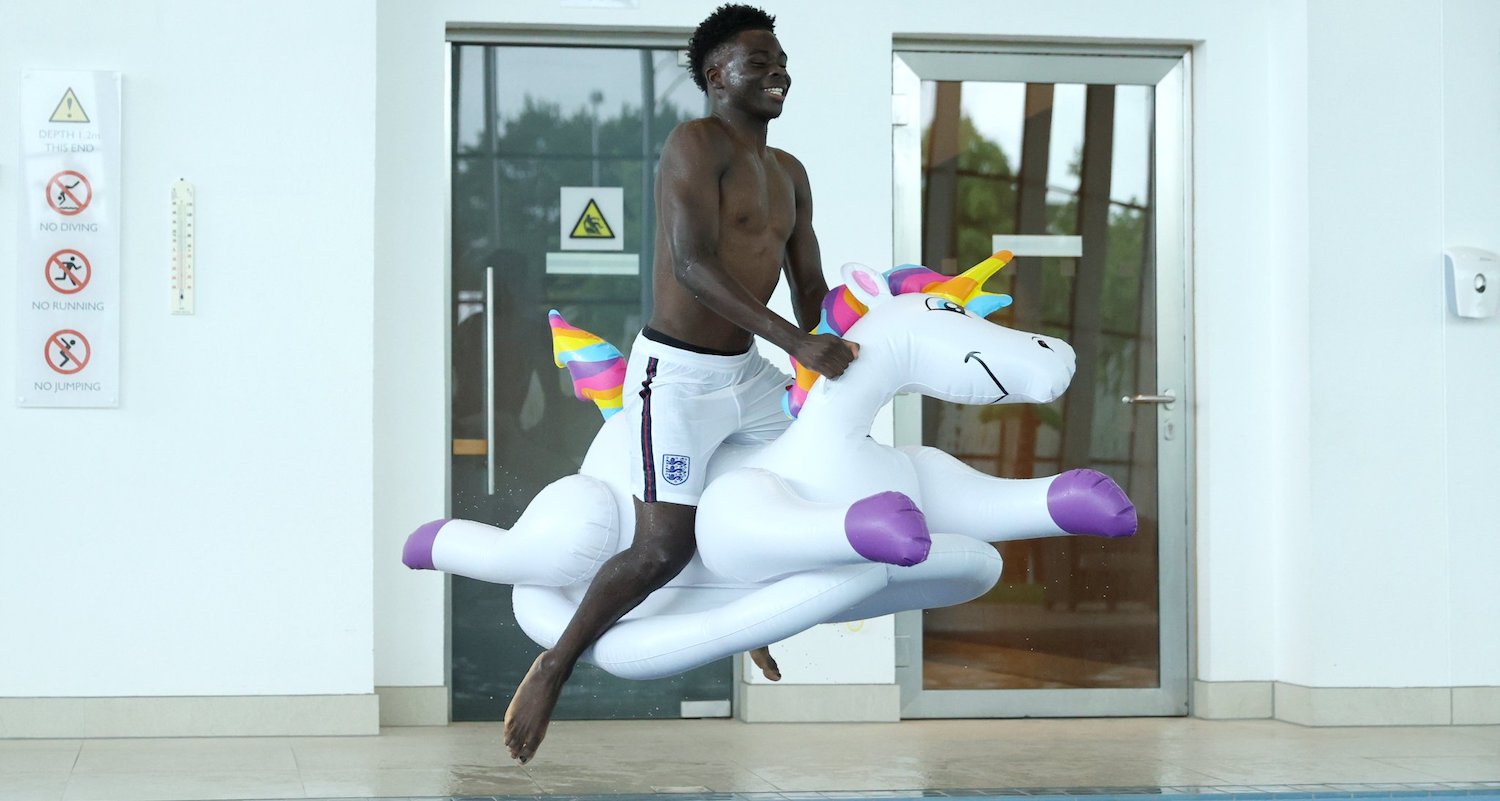 Where else can I start this morning, other than Bukayo Saka on an inflatable unicorn? It’s wholesome af, as they say (but probably without the sweary bit to be properly wholesome).

I’ve seen a few things doing the rounds on social media about how much the players in the England squad have mentioned Saka as the colleague they’ve got on with best. Luke Shaw said he wanted to be his dad or for Bukayo to be his son (which is a bit weird, but I know what he means); Declan Rice was talking about what a great young man he is; and I think at a time when it feels like every single thing associated with Arsenal is being looked at and discussed through a negative lens, we need to remember there are some good things about us.

Bukayo Saka is definitely one of them.

I’m curious as to what exactly he is going to be and where he’s going to play. He’s still 19, and it can take some time for a player to properly nail down their position. The England players have been impressed by how good he is wherever it is he’s played, but Arsenal fans won’t be. We’ve seen him play almost everywhere since he’s broken into the team. Either side of the front three, as a 10, in midfield, at left-back and left wing-back, and even temporarily as a right-back in the latter stages of games.

That’s a testament to his quality, but at some point he’ll become a fixture somewhere, and I’m really interested to see where that is. If I had to guess, I think it’ll be more central than we’ve seen him of late, even if I think he’s someone can score and assist from wide positions. Just a sneaky feeling, but let’s see.

I also think his breakthrough into the wider public consciousness is interesting too. We know how good he is, he’s often been the best thing about the team during our difficult times of late, but I suspect lots of fans of other clubs saw him as just the best thing about a poor team, rather than really good in his own right. The reality is when you finish 8th and the football you play isn’t particularly exciting or interesting, people don’t pay as much attention as they might do.

One of the other aspects of garnering that kind of attention is that players start to become coveted, and there are clubs out there with deep, deep pockets that will be well aware of Saka already, but whose interest will be piqued by the impact he’s had at the Euros. Players go back to their own clubs and talk about the talent, and what is abundantly clear is that Bukayo Saka is not going to spend his career playing for a team which scrabbles around in mid-table.

Obviously, Arsenal’s ambitions to create a more competitive team are the bare minimum for a club like this. Standards have fallen, we need to be better and we need to start challenging again for our own sake. But when you have special players like Bukayo Saka, it can bring some focus to things too. You can’t keep him if you finish 8th all the time. You can’t keep him without European football, and ideally Champions League. As much as he might love the club having grown up here, careers are short, and if he wants to achieve things in the game, he’s got to see a pathway.

It’s why Aston Villa continue to sniff around Emile Smith Rowe. We’re more vulnerable than we should be to opportunism because of where we’ve finished. Quite why we haven’t given them a NO that makes them go away is beyond me, but maybe we have and Villa are just really annoying and persistent (I think this could be true). To be clear, Arsenal cannot sell Emile Smith Rowe to Aston Villa and continue to be taken seriously. If a Man City come in with the kind of bid you just can’t turn down, that’s one thing – a pretty unpleasant thing, no question, but you could get your head around it if you stepped back and looked at it objectively. You might not like it, but you could understand it.

Not Villa though, regardless of how much they offered. That’s waving the white flag, basically, which is why I don’t get too stressed about these stories. It definitely increases the importance of getting Smith Rowe tied down to the new contract he absolutely deserves, but even this club – as mad as it is – can’t possibly sanction that kind of deal knowing what it would say to the fans and the outside world.

Anyway, back to Saka, and ahead of the new campaign, let’s remember only Bernd Leno and Granit Xhaka played more minutes than him last season. He’s still only 19, and rather than a summer of rest he’s been away training and playing with England. I think there are obvious benefits to that for him and his development, but we can’t ignore the need to manage him properly either. It sounds a bit mad to think about games against Man City and Chelsea without him, but it may need to be something we have to consider.

The players return for pre-season training on Wednesday, if England go all the way to the final that takes them through to next Sunday. He needs holidays, he needs a rest, and then he needs a pre-season of his own to get up to speed. Making it completely impersonal, we might have to make tough decisions to protect an important asset, and being able to cope without him for a little while is something Mikel Arteta may have to reckon with as he makes his plans for the start of the season.

For now though, it’s great to see him enjoying himself during the Euros, and hopefully the experience he gains will be beneficial to us when he is back and starting week in, week out.

Right, James and I will be recording an Arsecast Extra for you early this morning. Keep an eye out for the call for questions on Twitter @gunnerblog and @arseblog on Twitter with the hashtag #arsecastextra – or if you’re on Arseblog Member on Patreon, leave your question in the #arsecast-extra-questions channel on our Discord server.