What a difference fans make. For a game which really didn’t matter hugely for either side, the presence of supporters in Selhurst Park really added something to last night’s game.

A season is not a season without one, or more, of our players being blatantly fouled and the ‘Same old Arsenal, always cheating’ chant ringing out around a stadium. Whatever else has been lacking this season, we’ve got that.

There was a pre-game guard of honour for Roy Hodgson, taking charge of Palace for the last time at home. A nice touch for a nice man, but boy did his players do their best to spoil the night for him. Early on Jeff Schlupp was lucky not to see red for an over the top challenge on Calum Chambers. It was one of those where the timing was just marginally off but the resulting foul was nasty, reminiscent of when Pierre-Emerick Aubameyang was sent off here last season. 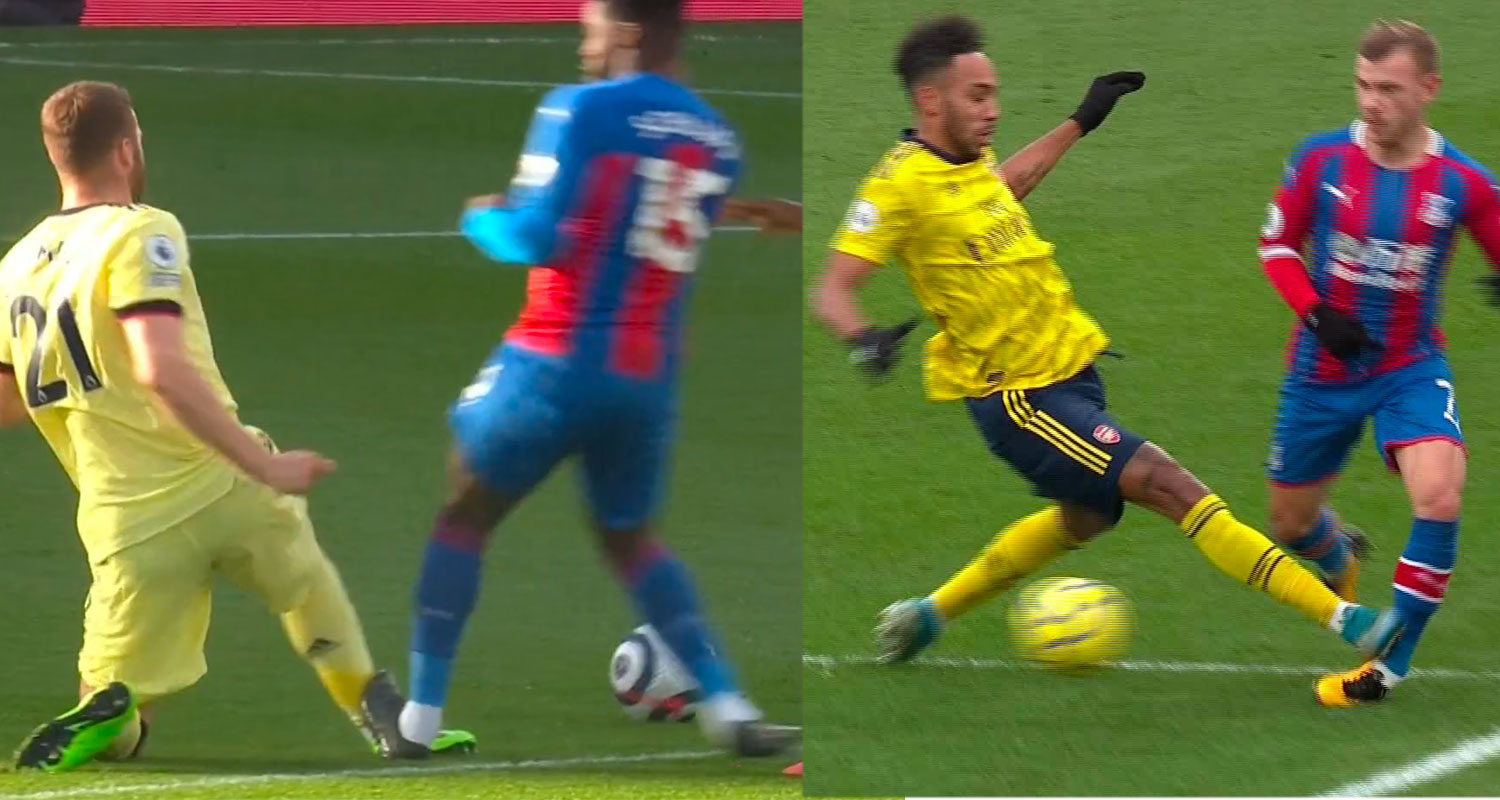 The ref booked him, VAR had a check and decided against a red, and in the BT Studio Peter Walton – a man who would defend a referee if he shot up a school then devoured some of the bodies – said it was an ‘orange card’ which, of course is really stupid, because there is no such thing. Thankfully Chambers was ok.

A few minutes later Joel Ward had a kick out off the ball at Kieran Tierney which the left-back 100% made the most of, but what was Ward doing in the first place? When you look at what was to come, you can see why players exaggerate. Apparently it was ‘common sense’ not to at least book the Palace defender. I just don’t get it. We could literally make a website called ‘IfthatwasXhaka.com’ and each time you refreshed you’d be served up some kind of punishment which wouldn’t sound far-fetched at all, such as:

If that was Xhaka … he’d have been banned from all football for 10 years.

If that was Xhaka … Peter Walton would calling for his extradition and prosecution at The Hague.

The only upside was Tierney becoming the pantomime villain, every touch booed by the home fans, which was lovely. Then we scored a very nice goal, thanks to great combination play between Bukayo Saka and the evil Tierney. The cross from the Scotsman found Nicolas Pepe in the middle and he guided the ball home really well with his right foot. I thought we actually played quite well in the the first half, even if Palace did have a couple of decent chances themselves.

Right at the end of the half, Christian Benteke was too strong for Saka, leaving the youngster in a bit of a heap. No issue with that, but Mohamed Elneny took exception, there was a coming together and Benteke caught him with an elbow under the chin. Perhaps accidental as he was trying to push him away but it happened. Somehow Elneny got booked and the Belgian escaped a red card despite a VAR check because there was ‘negligible force’.

I’ve been watching football a long time, and I’ve never heard that phrase used before in relation to an incident of potential violent conduct. I saw Pepe sent off earlier this season for the very definition of ‘negligible force’, so it’s almost like they’re making stuff up as they go along. Look, football is physical, I enjoy that part of the game, but if Elneny had gone down like that Leeds player did, Benteke would have been in much more trouble. I’m not even advocating that kind of behaviour, but it illustrates just how ridiculous the rules around violent conduct are and now they need a complete overhaul.

It was then fairly typical that Benteke would be the one to equalise during a second half in which we were, let’s face it, crap. We didn’t create anything of note, one sort of back-post chance for Aubameyang, but that was in the 83rd minute. Their goal came after Thomas Partey, for whom second halves appear to be a struggle, gave away a sloppy free kick to go with some of his sloppy passes. Our ‘marking’ was appalling, Elneny and Gabriel’s defending was pathetic, and Benteke powered home a header from close range. It looked a bit bad for Leno because it went under him, but it was point blank basically. The keeper pulled off some good saves last night and commanded his area well, so for me he was one of our better players.

Then, as we went into injury time Martin Odegaard found fellow substitute Gabriel Martinelli whose movement was sharp, and even if he did get a little bit of luck with how the ball looped up over the keeper, he was rewarded for his endeavour and poked the ball home from close range. The scoring wasn’t over, Nicolas Pepe grabbing his second with a delicious run into the box and a clinical finish into the bottom corner to make it 3-1.

A nice win, no question, but a scoreline which didn’t really tell you the story of the game. We remain a team which struggles to create chances, and thus score goals. It’s been an issue throughout this campaign, and it was evident again during that second half in particular. Still, we kept going, and credit to the lads for that, but you can’t rely on injury time individuality every week. Nevertheless, it was good to see Pepe get his goals, and draw some praise from Mikel Arteta, while Martinelli’s impact as a sub is a reminder that he is someone who needs to playing much more regularly next season.

The win leaves the Premier League table looking like this going into the final day: 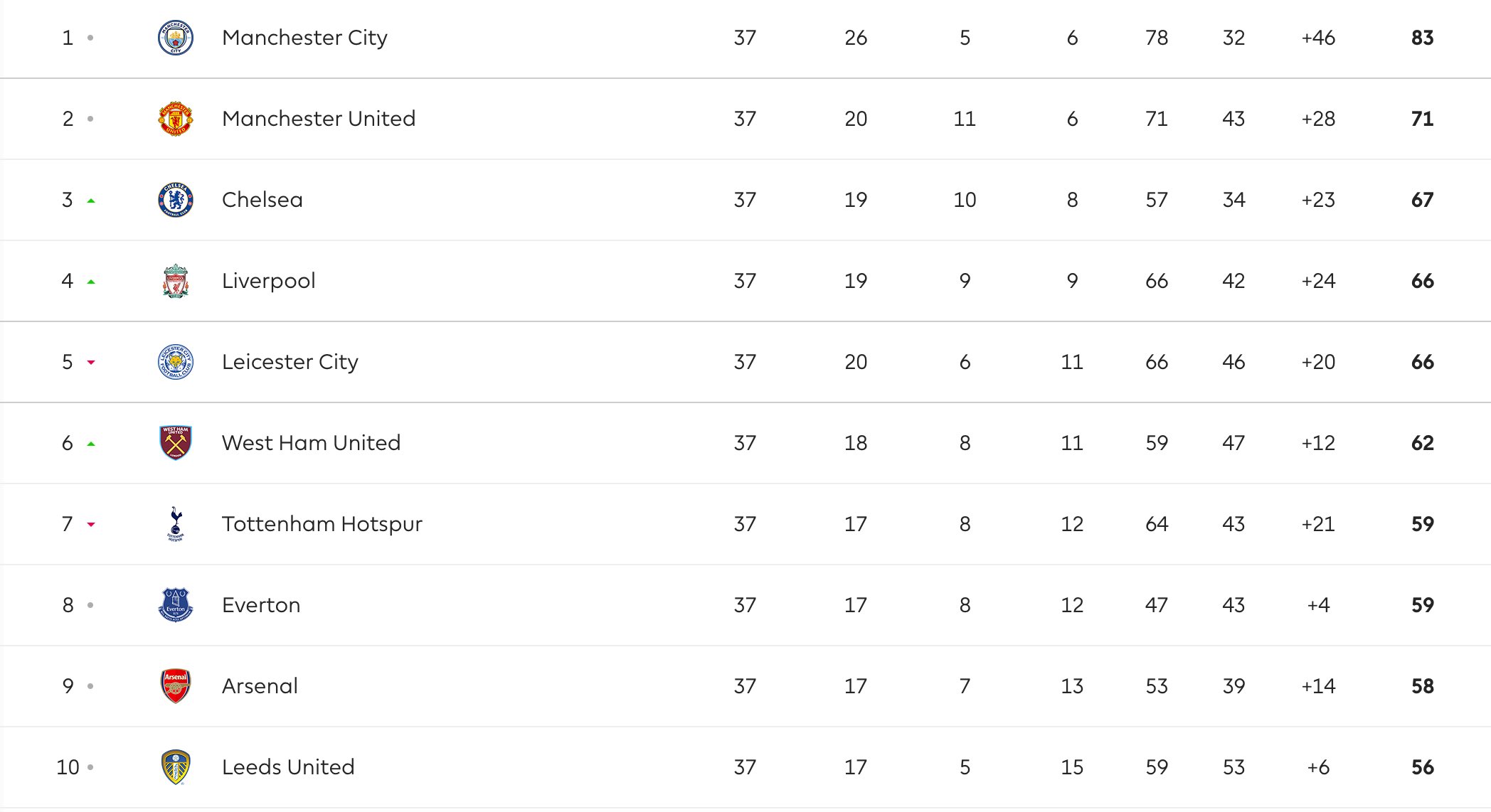 West Ham’s win over West Brom last night means we can’t finish 6th, but it’s still possible to finish 7th, and with that Europa Conference League next season. It’s also possible that we finish above Sp*rs, if that’s something you can really get invested in after this season.

The relevant final day fixtures are:

Here’s my ideal scenario. We win, Sp*rs draw so our margin of finishing above them is just a single point, while Everton beat a Man City side packed full of youngsters because they’re not risking anyone ahead of the Champions League final next Saturday. They finish 7th and get that final European place. I know beggars can’t be choosers and all that, but I just don’t want us to face the distraction of that nonsense tournament. For me, no Europe would be better than the Europa Conference Zenith Data Systems Admiral International One Pound Fish Autoglass Carabao Aldi Lidl Fruit of the Loom Steve’s-Auto-Shop Invitational.

It is almost certainly an inevitability of this reprehensible season that that’s where we’ll end up though, and it will serve us right. We’ll look back at countless games where we dropped stupid points and think ‘If only’ because even one or two fewer mistakes would have seen us qualify for the Europa League without any real hassle. It will be annoying because the financial benefits are minimal and the football benefits are practically non-existent – beyond it being a tournament exclusively for youth development. Even that is offset by the distraction of the manager/staff having to prepare for meaningless midweek games when the focus should be exclusively on the Premier League next season. I can’t ever want Arsenal to lose, but I can certainly keep fingers crossed that Everton win without any kind of compromise.

Anyway, that’s all to come this weekend. More on that and all the rest over the next couple of days on the blog. Back tomorrow with more, as well as an Arsecast, so until then, take it easy.