Arsenal won yesterday and relegated Sam Allardyce (and secondly West Brom), so that’s not a bad day’s work all things considered. The importance of the win was open to question, but every point is precious, every position you finish up the Premier League valuable in terms of money, and for all the dismissal of this game, I suspect there would have been plenty to say if we’d lost. And, of course, why wouldn’t there be?

Mikel Arteta started with Gabriel Martinelli up front, Emile Smith Rowe floating behind him, and Bukayo Saka at left-back. If you’ve been reading/listening to the podcast of late, you’ll know this is something I have been advocating since Kieran Tierney picked up that knee injury at the beginning of April. Saka was so good there yesterday that I thoroughly enjoyed his performance and was, at the same time, infuriated by the fact we didn’t do this sooner.

Is there a word for that? Enjuriated? Infoyed? Maybe German has a word for it. They’re brilliant at that kind of thing. I know it was ‘just’ West Brom, and I know he’s been important in the final third this season, but as he found space time and time and time again to get in low crosses, overlapping like a real full back, it was impossible not to wonder how we might have fared with him there against Fulham, against Everton and, most importantly, against Villarreal.

Instead, Arteta chose to play Granit Xhaka there. I want to make it clear that I don’t have any issue with Xhaka himself who did his best, but his deployment there changed so much about the team. Whatever you think of him, he’s a better option in midfield than either Ceballos or Elneny, and using him in the back four meant we then had to re-wire midfield to cope with a full-back whose physicality and mobility meant he barely crossed the halfway line.

There would have had to be a trade off up the pitch, of course, but to me that decision is one of Arteta’s biggest mistakes since he took the job. There have been plenty, and that is true of all managers – none of them are flawless – but rather than using the most obvious, almost like for like switch at left-back, we over-complicated things and I think the results during that period illustrate that. And if anyone’s accusing me of being our favourite superhero, Captain Hindsight, well … 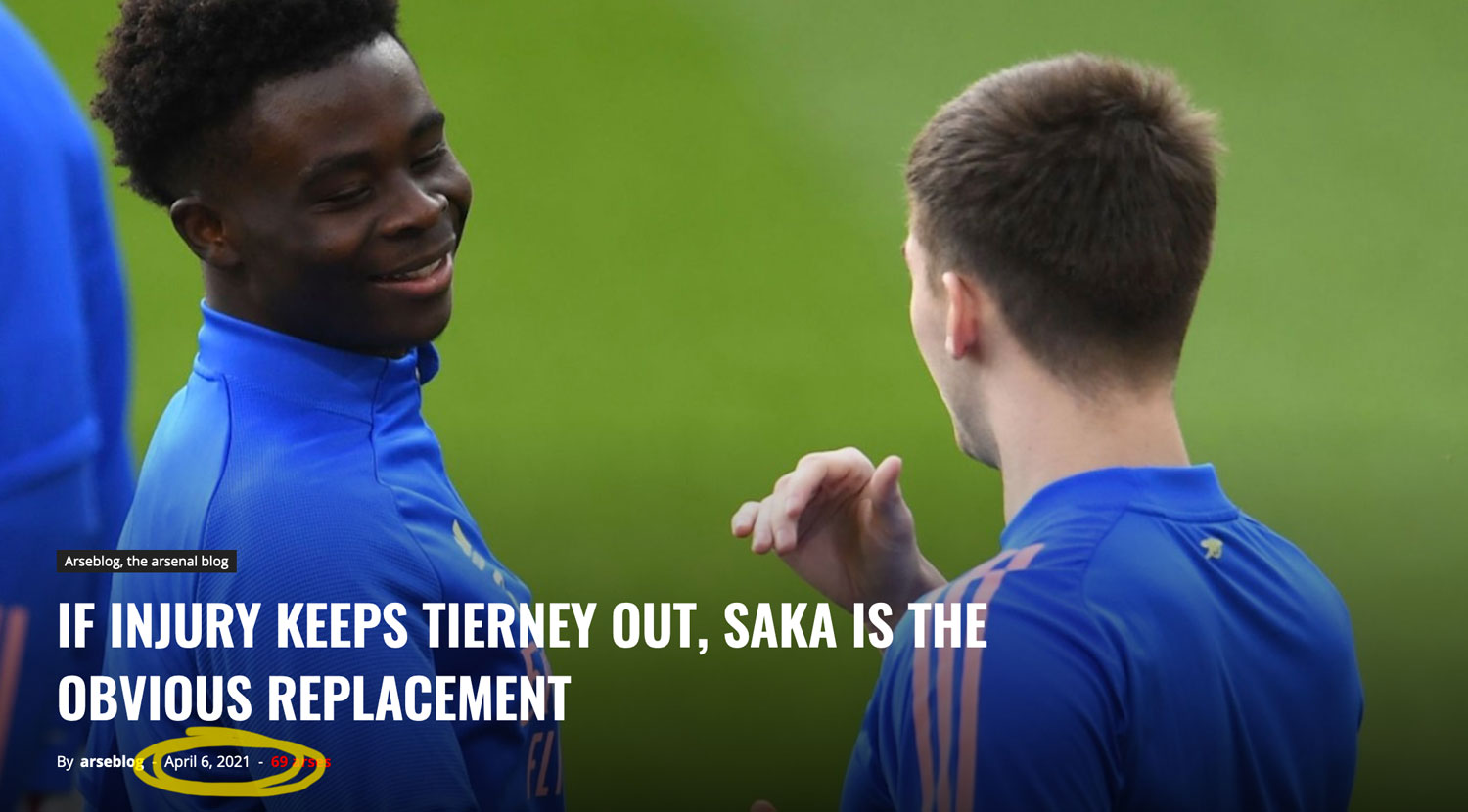 Anyway, it’s water under the bridge now and there’s no way to change it, but I really wish he’d done it. That Saka created the opening goal felt like just reward for his performance, and so too Emile Smith Rowe’s first Premier League goal for the club. I love the way he plays, the bravery he shows and the desire to go forward and make things happen, and his movement in the box to get on the end of a move he was involved in was as sharp as it gets. Tidy finish with his left foot too.

The second goal came just a couple of minutes later, Nicolas Pepe cutting in from the right hand side to bury a shot into the top corner. It was a brilliant finish on a night when not much else went right for him. His opposite number seemed to have him worked out well and made a number of very good defensive interventions, but Pepe is capable of moments of outstanding quality and that was one of them.

Lacazette and Tierney replaced Martinelli and Smith Rowe fairly early in the second half (by usual sub standards), and West Brom pulled one back with a goal that did my head in. There’s a scene in an episode of the Simpsons where a turtle steals Grandpa Simpson’s teeth, and watching Dani Ceballos chasing Matheus Pereira as he took off through our midfield reminded me of exactly that. None of our defenders did anything concrete to try and stop the Brazilian, and his shot went in off the post to give the Baggies some hope. We brought on Thomas Partey to add some security to midfield.

The game was made safe late on when we won a free kick outside the box and Willian stepped up to score his first ever Arsenal goal. There’s something quite apt about it coming in a game of such little significance, and that it’s taken him until May to get on the scoresheet tells you a lot about his first – and hopefully last – season at Arsenal. Good finish, to be fair, but there was some pretty epic NFL style blocking/holding from Lacazette and Elneny to make space for him to find the top corner.

“B (Bukayo Saka) got the ball down the wing and when he crossed it I just tried to stay as calm as I could and it was a good finish, I’m happy with it.  I feel like we know each other inside out and we’re going to keep carrying on and keep playing games together.”

When you think about Arsenal’s future, these two guys are right at the top of the key component list. Their quality is obvious. Smith Rowe had to go off after feeling something in his hamstring, something the manager mentioned as an ongoing issue in his post-match comments, but hopefully with the benefit of some summer rest, and a good/normal pre-season, he’ll be more durable in the next campaign.

There are players we need to lean into, and players we absolutely have to move away from, but this morning let’s enjoy the kind of talent produced by our own Academy that would cost tens of millions in the open market – even in this weird, pandemic-impacted world we’re living in.

It’s an odd week, we play Chelsea on Wednesday, so that’ll be a huge test, but for now, a win, three points, and some encouragement from players who demonstrated they have the right character for what this club needs to be in the future.

Arsecast Extra with Andrew Allen coming a bit later (James is out of action today!). Until then.