Home Arseblog, the arsenal blog Villarreal 2-1 Arsenal: Gunners get lucky as Arteta gets it all wrong 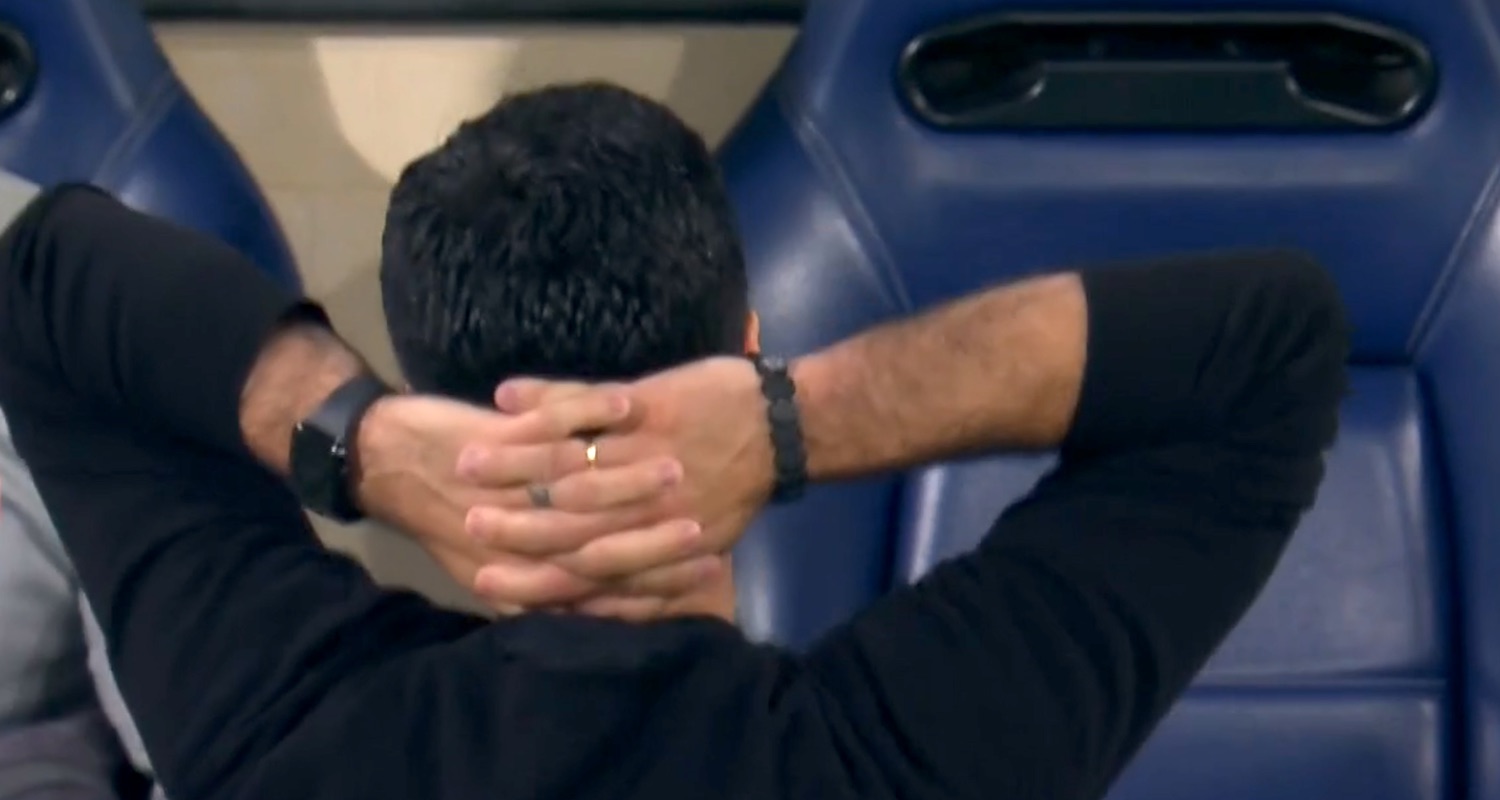 There are times when a football result has little to do with a manager. He picks a good team, there are things he can’t legislate for, random events that are out of his control that impact the final score. There are other times when what the manager does directly impacts a game and last night was one of those for Mikel Arteta.

Let’s not beat around the bush here: Arsenal are very lucky to be still in this tie, having gone 2-0 down inside half an hour, and then been reduced to ten men with the kind of red card a blind man could have seen coming. In some ways we have to thank Unai Emery for being Unai Emery. Another coach would have smelled blood, but the man who lost his job with us could only smell his own fear and his decisions played a part in this game not getting away from us completely.

Arteta’s decision to play Emile Smith Rowe as a False 9 felt far too clever. It did look from the UEFA team graphic as if Nicolas Pepe was going to be used as a striker and, while unconventional, I wouldn’t have minded seeing that. Yet instead the Ivorian started on the right with the Hale End graduate ‘up front’. Much like the deployment of Willian there against Man City earlier in the season, it smacked of a decision designed to thwart the opposition coach’s expectations of our set-up rather than one to make his own team better.

I bet Emery didn’t really consider this was how we might play, because … well, why the hell would we? I know Pierre-Emerick Aubameyang wasn’t 100%, Alexandre Lacazette didn’t make the bench, and Eddie Nketiah is a bit lightweight, but he had Gabriel Martinelli to play up front. He could do the pressing he asked Smith Rowe to do, and he has the ability in that forward position to cause the opposition problems. The disjointed nature of our plan was highlighted by the sight of Calum Chambers crossing repeatedly to our no centre-forward, and to attempt this kind of a system in a game of this importance was, to me at least, far more arrogant than it was foolish (although both ingredients made up that unpleasant cocktail).

Going 1-0 down inside 5 minutes wasn’t great either. Dani Ceballos couldn’t live with the forward burst of Juan Foyth – a man who runs like a constipated dinosaur desperately seeking some bushes – the defending wasn’t great, and when the ball broke to Trigueros he gladly helped himself to a smart finish beyond Bernd Leno.

Ceballos has been something of a disaster in the Europa League this season, and a terrible touch from a Thomas Partey pass gifted Villarreal possession from which they won the corner to score the second goal. There was a lot more wrong with what happened, but he almost has a reverse Midas touch in that everything he touches turns to shit. The corner came in, Pablo Mari was too static and didn’t attack the ball, Partey stopped tracking his man, and Albiol spanked it home at the far post. Arsenal had yet to have a shot on target.

Just before the break, Ceballos got roasted by Foyth again, tripped him up and got a deserved yellow card. Thankfully the free kick came to nothing (I was expecting it to hit the top corner and somehow count double), but it was as much evidence as Arteta needed that a half-time change was in order. Ceballos needed to come off and we needed to get Xhaka into midfield. We needed to do something to change what had been a dismal 45 minutes.

Arteta changed nothing at the break. Ceballos made a foul within 60 seconds that ought to have set off alarm bells, klaxons, warning signs, whatever kind of signal that maximum danger was imminent. Arteta did nothing. To be fair, I thought the second yellow was pretty harsh, but if we could all see it coming, there’s no excuse for Arteta and his coaching staff. That one was entirely on the manager, and it was really, really stupid. His in-game management is not improving and his justification for leaving him on doesn’t stack up. He said:

We talked at half-time to say that we had to be very careful, there was a tackle very early and I was going to take him off but by the time that Gabi was ready to come on, that action happened and he was out.

All well and good, but he had 15 minutes at the break to make a change. A half-time substitution isn’t something to be ashamed of. If you can recognise your game-plan isn’t working, that’s good management. If you can acknowledge that a player is in danger of making your task much more difficult, that’s just common sense. There’s an intransigence to Arteta that is an ongoing issue, almost as if he’s unwilling to make decisions which say ‘I got it wrong’. But being unwilling to do that is a double-edged sword because he’s simply compounding the problem.

Two things though. 1 – We were better when Ceballos went off, which tells you something about the way some of the players responded, and also how little the on-loan Real Madrid man has brought to the table this season. 2 – Emery’s decision not to turn the screw at half-time, and instead make a defensive substitution, was one we benefitted from. The introduction of Francis Coquelin for Paco Alcacer was, I guess, designed to provide some midfield security, but born out of Emery’s inherent caution – something we saw on display many times during his time in North London.

Instead of going at a team which was defensively iffy, not least with Mari struggling and Xhaka being targetted at left-back (to be fair to him, he did pretty well and led the team with 5 tackles), Emery sat back. Even so, they could have made it 3-0 when Leno made a superb save to deny Gerard Moreno (again Mari was poor here), denying a goal which would have ended the tie and provided a Coquelin assist, of all things.

Bukayo Saka then won a penalty, and I use that term deliberately because it was very much that rather than an egregious foul. However, I view it as payback for Jose Mari’s dive in 2006, so let’s not dwell on it. Nicolas Pepe, with Arsenal down to 10 men, had the job under maximum pressure and slotted the ball home. Then we saw a touch of Spursiness added to proceedings when Capoue picked up a second yellow and had the red card issued to him as he was stretchered off the pitch having injured himself in the collision with Saka.

I would have liked a second goal, and it almost came right at the death when Partey’s brilliant pass put substitute Aubameyang through, but the keeper saved. To be honest though, I was just glad we didn’t concede another. There were a few too many moments at the back when we put ourselves under pressure to feel comfortable in the final stages, but 2-1 – while still a bad result – is nowhere near as bad as it might have been.

If we got out of jail last night, we have to admit we locked ourselves in there in the first place because of Arteta’s poor management of the game, while Emery was the dimwitted prison guard who left the keys of the cell in reach. The pressure of a semi-final can do funny things to players and managers, but this was as low quality as you could have imagined, and I enjoyed Andrew’s Tweet which pretty much captured why:

You can tell both teams have Arsenal managers in charge.

I suppose the fact we have to score goals to win next Thursday should see the manager use a system the players are comfortable with. Auba looked sharp in his five minutes or so, and if we have Kieran Tierney back, the experience of David Luiz (I can’t believe I’m clinging onto that, but here we are), Lacazette on the bench, and no Ceballos to nail our feet to the floor, a one goal deficit is certainly not beyond us.

But, Arteta needs to stop overthinking. He may have what he thinks are good ideas, and I’m not saying I know more about the game than him, but sometimes the most obvious thing is the best thing. What he did last night almost cost us our last chance at salvaging something from this season, and perhaps it was a decision made by someone who feels comfortable enough his job to make it in the first place. Too comfortable, perhaps?

I hope he takes the lesson, but if we play anything like that again, if we dick around with the formation and risk a new set-up in a hugely important game, we’ll end up with exactly what we deserve. Nothing.

And where we go from there is anybody’s guess.

James and I will be recording an Arsecast Extra for you this morning. If you have questions or topics for discussion, send to @gunnerblog and @arseblog on Twitter with the hashtag #arsecastextra – or if you’re on Arseblog Member on Patreon, leave your question in the #arsecast-extra-questions channel on our Discord server.

Podcast will be out around lunchtime, until then, take it easy.