Earlier this season Arsenal couldn’t create chances. Now we can’t take chances. At some point you have to acknowledge that’s not necessarily an improvement, it’s just a different kind of problem.

If your glass is in any way half-full this morning, you’ll point to the fact that Bukayo Saka should have put us ahead in the first half; that Alexandre Lacazette’s abysmal miss in the second half ought to have calmed the nerves; and that Pierre-Emerick Aubameyang probably should have done better with an opportunity when he was belatedly introduced. Not to mention we did actually get ourselves ahead – although I think enjoyment of finally scoring wiped out the memory of a glorious Slavia chance just a few minutes before, but thankfully the player shanked his shot wide after we were in all kinds of trouble.

I’m not sure too many glasses will be half-full though, after what was a really poor night for the team and Mikel Arteta. Starting Lacazette rather than Aubameyang felt more like punishment than picking the right player for the game. Nobody can say he’s been in good form, but Lacazette was just as bad against Liverpool, and at least the captain had the ‘excuse’ of not playing in his best position. Against a team which plays such a high line, something we tried to expose as much as possible too, it didn’t make much sense.

I suppose the absence of Martin Odegaard might have fed into the decision to start Willian, but I no longer have anything new to say about him or his continued inclusion in the team. Neither he or Lacazette can play football at the pace it needs to be played these days if you want to be good. If you want a leaden footed veteran he ticks all the boxes, but beyond that it’s hard to see what he contributes. Or, indeed, what Arteta thinks he can contribute.

Gabriel Martinelli may not yet be the fully rounded player he’ll become, but at least he can run. His legs are working. Similarly, Nicolas Pepe demonstrated the usefulness of being able to move at pace with his goal. It was a nice pass from Aubameyang, but the warp-speed run and brilliant finish were too much for Slavia to cope with. Game state may have played a part but bringing on players with functioning legs made us more effective. Before that, beyond that mistake which allowed Lacazette to amble through on goal, they’d had little to worry about.

That miss though. Oh boy. Not only was it like watching the human equivalent of paint drying as he made his way towards their box, almost getting caught by a lumbering defender, I just never felt like he was going to score. I’d have put money on Theo Walcott finishing that; I wouldn’t have put someone else’s on Lacazette. It was an appalling miss, poor technique, and it happened in the 62nd minute. He was then given a further 15 minutes to do nothing, apart from miss another good chance at the back post because he couldn’t sort his feet out.

Whatever about selecting those players in the first place, leaving them on for so long only compounded the problem. Martinelli came on for his elderly compatriot, and eventually a triple sub saw Arteta introduce Aubameyang, Pepe and Elneny (replacing Thomas Partey who was just as bad as Willian and Lacazette). This was the 78th minute, in the home-leg of a European tie we needed to win. Arteta has his flaws, no doubt about it, but the most obvious one is substitutions and in-game management. It’s not something that appears to be improving. I mean, you could argue that two of those subs combined to put us ahead on the night, but what if they’d been on earlier? That one goal might have been two and given us control of the game.

As for their equaliser, that whole passage of play made me sick. I advocated for Saka to play at left-back, and the cost of playing a right footed player there was obvious when Cedric, with all the space in the world to drive on and play the ball up the line, chickened out and played a pass back to Gabriel. The Brazilian’s touch wasn’t good, but he shouldn’t have been given the ball in the first place. From there they got a throw, forced Leno into a good save, and from the resulting corner Cedric’s defending is pathetic and there’s nothing the keeper can do about a point blank header.

IN THE 4TH MINUTE OF INJURY TIME AT HOME.

Look, whether Cedric is right footed or not, the position you’re in on the pitch, the position we were in in the game, and the position of left-back itself demands you go forward. Ease the pressure by getting the ball away from your final third. 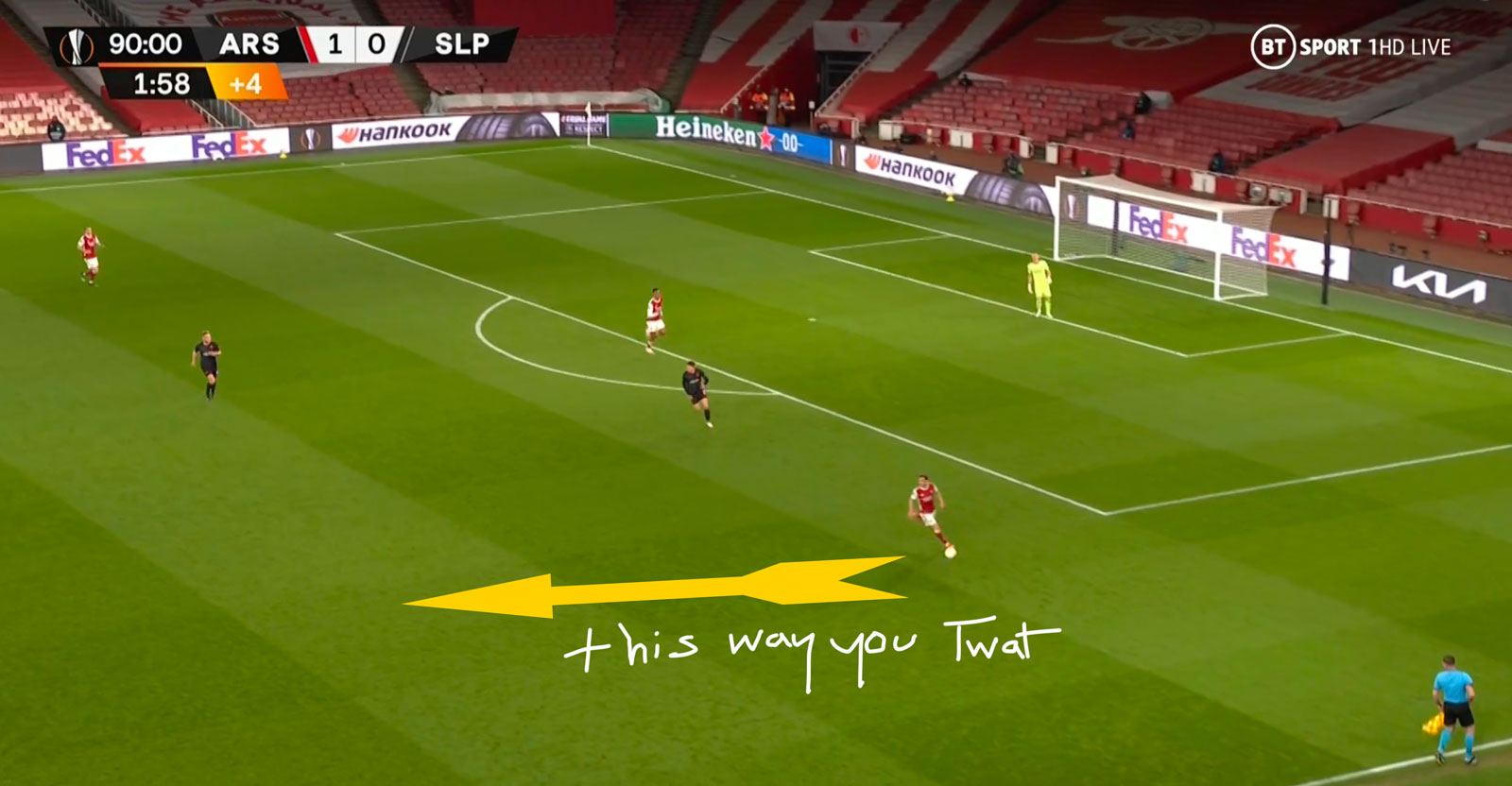 Our ability to hit the self-destruct button is now so masterful we have added layers to it. Subtleties that others simply can’t see. It’s so refined we push it and a few passages of play later it goes off. In seriousness though, 1-0 would have been ok. Not great but a lead to take into the second leg. 1-1 is terrible, because they now have an away goal.

It’s not a down and out situation. Win in Prague and we go through, but the way we continue to make life as difficult for ourselves as possible is hard to stomach. It can’t keep happening, and when a significant part of it is down the manager because of his team selection and his refusal to change things when it was absolutely necessary, you have to worry about where we’re going.

I think as a team we’ve been worse in other games this season than we were last night, but I don’t think a result and performance has ever felt more Arteta than this one. I’ve been trying to see the positives – and I don’t dismiss that there have been some – but last night really dented my view on the work he’s doing. Whenever he speaks, I hear an intelligent man who says the right things most of the time, and I think he genuinely cares, but I can no longer understand many of his decisions.

If we can all see Willian is a busted flush, what is it – beyond some kind of hubris and a desire to be proven right about signing him – that sees him picked? Why, if you have technical players behind a striker against a team playing a high line with makeshift central defenders, do you play the most immobile, sluggish striker we’ve had in years (and I include Olivier Giroud in that)? Does making changes earlier force Arteta to acknowledge he got it wrong with his team selection in the first place, and that’s a point of pride? Why, when you see an opposition goalkeeper who looks he’s struggling to come to terms with the concept of kicking a football, didn’t we put him under more pressure when he had it at his feet? Like I said, I don’t understand.

We now face Sheffield United on Sunday; we’re likely to be without Odegaard for a couple of games because we played him against Liverpool when we knew he had an ankle injury (another lesson we keep not learning); and have it all to do in the second leg next week. What’s left of our season depends on that game, and that game alone, and Arteta needs to get it as right next Thursday as he got this one wrong.

Arsecast coming later on today, because of the late kick-off and all the post-game stuff, there was no time to record last night, but we’ll have something for you around lunchtime (not an Arsecast Extra btw).