Home Arseblog, the arsenal blog Benfica 1-1 Arsenal: Missed chances, but we made chances 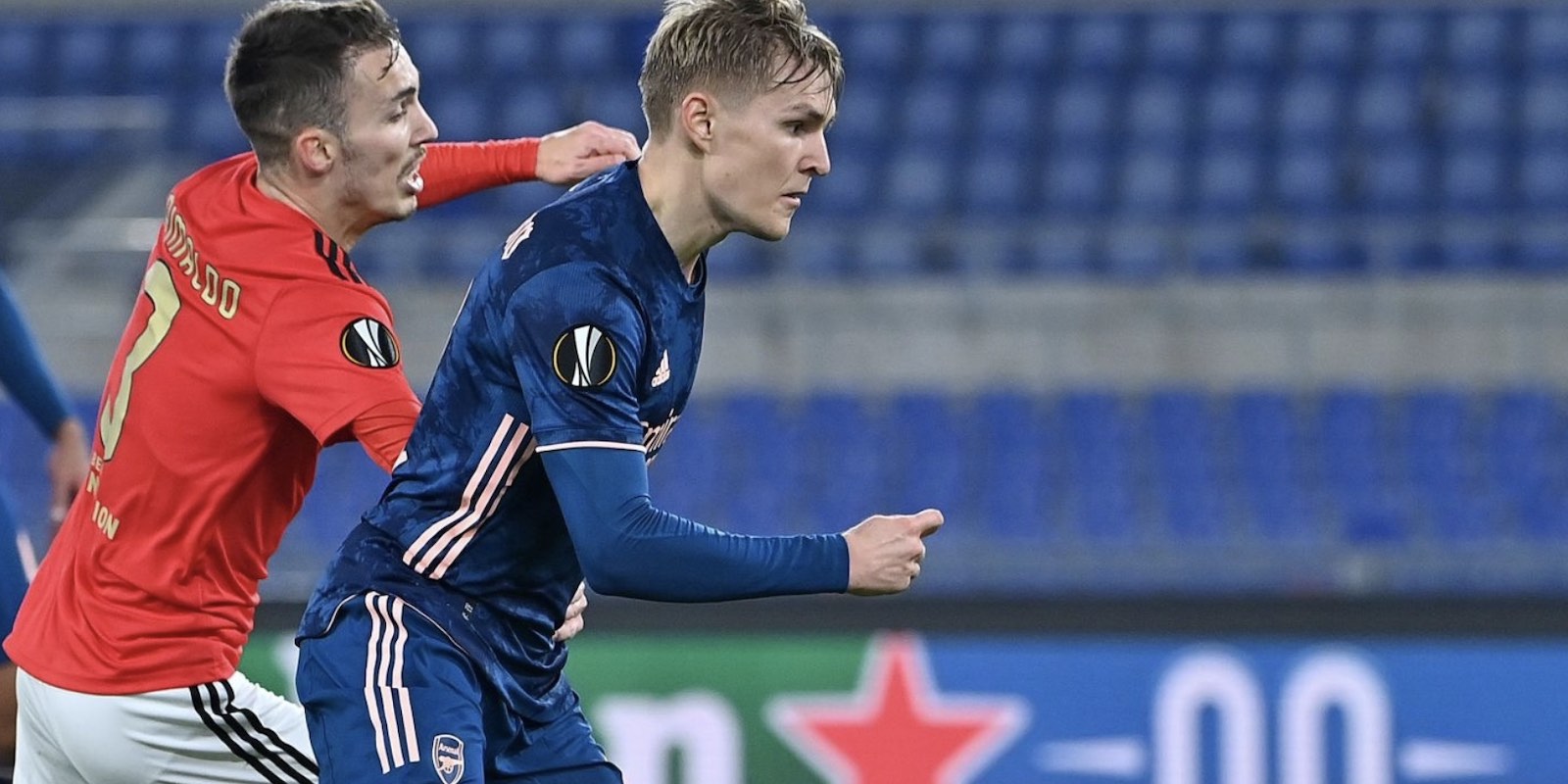 A 1-1 draw ‘away’ in the first leg of a European knock out tie isn’t a bad result on paper, but Arsenal will feel last night should have brought much more than that.

“We weren’t ruthless enough in the opponents’ box and the disappointing thing obviously was the way we conceded the goal,” said Mikel Arteta afterwards, hoping that this won’t come back to bite him and his team in the arse when we face Benfica in Athens next week.

Surprisingly – to me anyway – we started the exact same team that beat Leeds. For those who were keen to see us prioritise this game over Sunday’s visit of Man City, it must have been pleasing. And to be fair, that team played very well in the last game, and started brightly last night too.

There were a lot of offsides as we tried to get in behind their defence, which at least showed we understood the best way to make chances against them. We even tried to vary it, with long balls from the back too, but what that defence lacked in pace, it made up for in experience and they held their line well.

It’s easy to wonder how the game might have gone if we’d taken that chance midway through the half. Dani Ceballos brilliantly found the run of Hector Bellerin, the right back laid it on a plate for Pierre-Emerick Aubameyang who put it wide when it looked easier to score. Not quite Gervinho v Bradford, but for a player of his quality and finishing ability, it wasn’t far off.

I don’t think anyone would have argued against us deserving to be ahead at that point, but it felt like the miss took the wind out of our sails a bit. The game took on a very familiar European knock-out feel, more cagey, there was less drive about us. This isn’t to make any excuses, because I felt as it went on we slowed down further and further, but that pitch looked very heavy, the ball trundling its way from one player to another. That might have just been us though.

Their penalty came not long after we had another good chance early in the second half, this time Bukayo Saka after patient build-up then an injection of zip to get into the final third with Bellerin, Odegaard and Ceballos all involved, but he pulled his shot wide. A minute later they had a penalty. I think it’s a touch harsh on Emile Smith Rowe, the ball hits his chest and then his arm, but his arm was up and if that happened at the other end I’d want it for us (I also think the 20 year old’s reaction said a lot – he didn’t really protest). Pizzi had the honour from the spot, and made it 1-0.

If we’re looking for positives from last night it’s that we didn’t let our heads go down and we responded quickly. The lead lasted just two minutes and it was a really nice goal too. It began with a Granit Xhaka sliding tackle in our box which, I won’t lie, had my heart fluttering as he skidded towards the ball, but he won it cleanly. Fourteen passes later and it had gone from our penalty area to theirs, Odegaard’s pass to find Cedric’s run was excellent and Saka was there to put it home from close range.

Five minutes later and Aubameyang had another chance which he fizzed wide, again Odegaard was involved, and for me he was one of the real bright spots of last night. There was a superb pass inside the Benfica defence for Saka in the first half which reminded me so much of Cesc Fabregas, and there were moments when I felt some of his teammates lacked awareness when the Norwegian was in excellent positions in that central area. I hope those are part of the video analysis this week, because if we can get the ball to him in those positions, he can create danger, no doubt about it.

After a hat-trick against Leeds, the captain’s hat-trick of misses was completed in the 75th minute when, instead of shooting with his left foot he tried to cut back and was tackled. It was a great pass from Gabriel to put him through, and while I’m as down on the misses as anyone, I don’t think we should overlook the fact that in the last two games he’s found himself in some brilliant positions to score. I know it’s small comfort, but for a team which has struggled to create clear-cut chances often enough this season, that we’re making those opportunities for him is a good thing.

I think Arteta will be frustrated by not taking those chances, but pleased we made them. He said afterwards of the skipper:

These things happen. He was on the end of the biggest chances we had tonight. He was a real threat and we played against this opponent with a high line they propose all the time, and he was unlucky of course not to score two or three tonight, because in normal circumstances that would be the case.

To me, it felt like the difference in this game would come from the bench, and when I thought about who we might bring on, Kieran Tierney, Nicolas Pepe and Gabriel Martinelli were the names I thought of. The former replaced Cedric in the 64th minute, but it wasn’t until the 77th that the other too came on. I’m not necessarily convinced they were the wrong subs, but perhaps the timing was off. I would have liked to see them get more time.

Our goal threat disappeared, but it’s hard to know how much of that had to do with the changes and how much with game state. 1-1 with 15 minutes to go, and there’s a natural caution. Arsenal, stung before more than once, not going for it and leaving ourselves exposed on the break; while Benfica shut up shop and were obviously trying not to concede another away goal. There was too much caution on our part, I think, there is a balance and we went a bit too far the other way. Some of the laboured passing around at the back in the final stages was very frustrating, but not as much as letting in a daft goal, I suppose.

Overall, and I realise I might be in a minority here, I’m not too down on our performance. The result could and should have been better, and I fully understand the looming spectre of a second leg where we come to regret not scoring more in the first. We’ve all been there, done that, and worn that particular t-shirt more than once. However, Benfica didn’t cause us too many problems, and we did make good chances, so based on that if we can improve a bit next week in Greece, we’re more than capable of going through.

Now though, we turn our attention to Man City on Sunday, and wonder how many of what was our best available team last night can play again just a few days later – with travel etc involved too. More on that over the next few days here on the blog.

James and I will be recording an Arsecast Extra for you this morning. As ever if you have questions or topics for discussion, send to @gunnerblog and @arseblog on Twitter with the hashtag #arsecastextra – or if you’re on Arseblog Member on Patreon, leave your question in the #arsecast-extra-questions channel on our Discord server.