Home Arseblog, the arsenal blog Back at the Emirates. Time for back-to-back wins 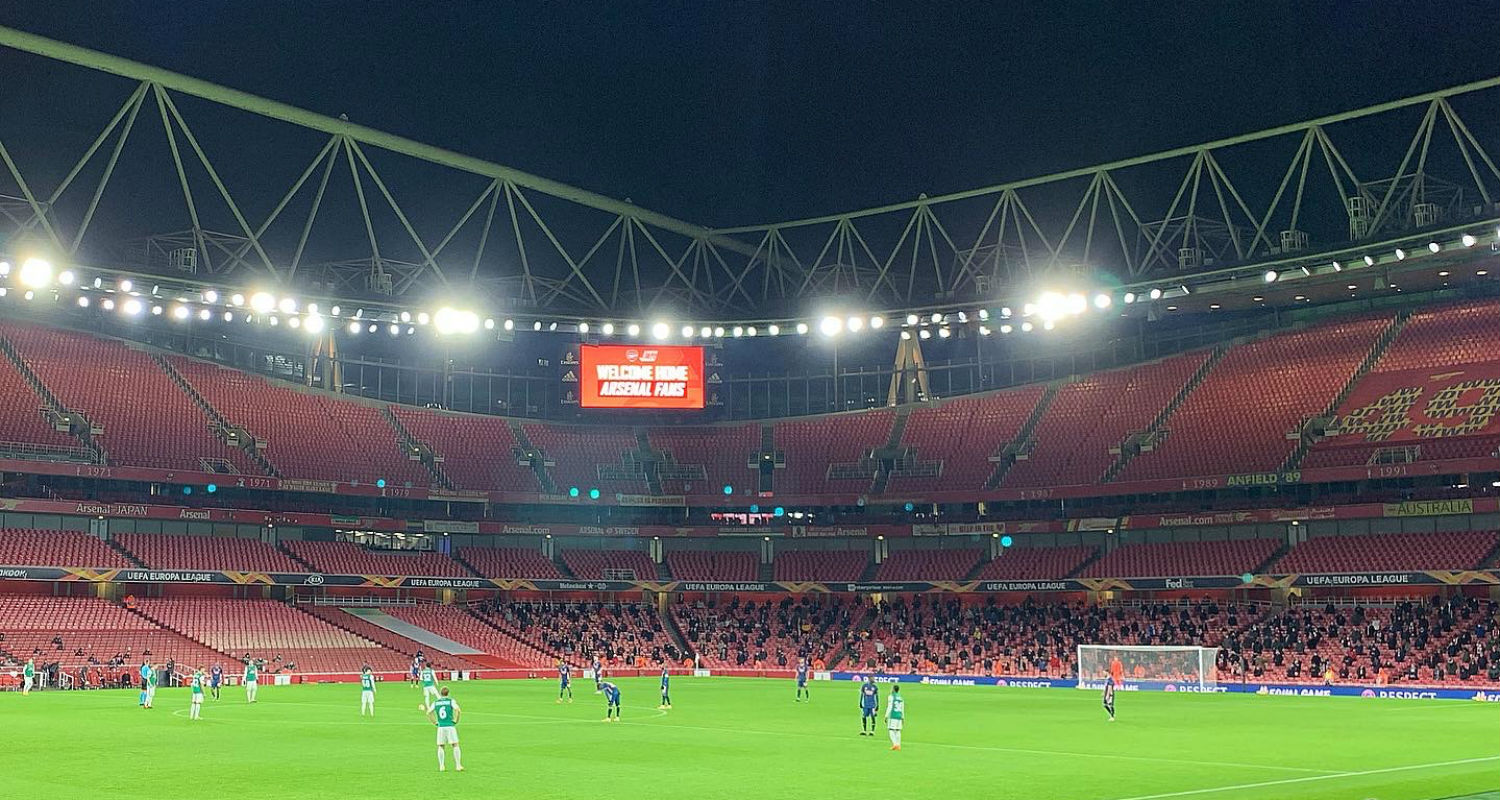 On Thursday evening, the stewards in Block 19 marked the end of my 271-day exile from the Emirates by cheering me through the turnstiles. It was a touching and totally unexpected show of enthusiasm; a surreal moment on an evening that edges us closer to normality but wasn’t at all normal itself.

For a start, there were a few more hoops to jump through to get into the ground. Identity check. Tick. Temperature gun pointed at my head in a gazebo with festival entrance / internment camp vibes. Tick. A metal detector wanding by a man in full PPE trying to do a thorough job on my inner leg without wanting to get too close. Tick. Cavity search. Erm, I think you had to be in Club Level for that. You can insert your own ‘Up the Arse’ jokes here.

I can’t speak for the other 1,999 lucky punters, but by the time I was in my seat, I felt pretty safe in my surroundings. I was possibly 50 metres too close to BT Sport’s walking dad joke, Jake Humphrey, but you can’t have everything. Anyway, kudos to the club for nailing the logistics and thanks to my fluorescent cheerleaders.

I know Blogs touched on this in yesterday’s blog, but it did feel like the players responded to the presence of a crowd. Sure, it was a Europa League dead rubber against a side who caused our kit man more headaches than our defence – blue at home? Not for me, Clive – but the spontaneous chants denigrating our neighbours added a frisson to proceedings.

“What do we think of Tottnum?” It turns out, we feel exactly as we did nine months ago.

At least some things haven’t changed.

Given we head up the Seven Sisters Road tomorrow, I can only hope the players take some confidence from having rattled in a few goals against Rapid. It was definitely our slickest attacking performance in a while (even the data says so) and a timely balm after some god-awful showings in November.

That win against Manchester United feels like an age ago, doesn’t it? Heading into the North London derby we’re winless in three Premier League games, 17th in the scoring charts and tied 15th for fewest shots per game (@Orbinho).

All very depressing and, unsurprisingly, that downturn in form has heaped pressure on Mikel Arteta. I thought the Spaniard spoke very well earlier in the week when he tried to put recent results into the context of his grander plans. He’s not stupid, he knows he can’t afford for this run to continue, but he’s also very aware of the limitations of his current squad and the time it’s going to take to fix things.

On Wednesday, he said:

“I’m ready to fight all the way through because I believe that we can do it. We are going through difficult periods, we will see who responds, who doesn’t and how we react as a club through different periods, and how we stick together when things aren’t going well.”

According to ESPN, those comments came 24 hours after a heated team meeting that was called to clear the air.

It was led by Arteta and his coaching staff and then the players held “an impromptu second by themselves which has been described by multiple sources as ‘stormy’ and ‘intense’.”

Ironically, one of the leading points on the agenda was a warning from Arteta that he’s still investigating who leaked the training ground bust-up that happened between Dani Ceballos and David Luiz a couple of weeks ago. It definitely feels like someone is sticking two fingers up at him by immediately going to the media again.

Should he be worried? You certainly don’t want players talking behind your back. That said, perhaps the guilty parties know their days at the club are already numbered.

For his part, Hector Bellerin thinks the criticism that has been directed towards Arteta is pretty ridiculous and maintains that the blame for recent defeats sits squarely with the players.

Asked to comment on grumblings about the manager, he told beIN SPORTS:

“So unjust. So unjust. We have to, as players, take responsibility for this because I think we all know that Mikel and his coaching team give us all the tools that we need to win all the games.

“When you lose a game it’s always very easy to blame the coach. But also when the coach gives us the tools we have to be the ones to step up.

“The way that Mikel plans these games, all the knowledge that they give us before we step on to the pitch is second to none.”

Speaking to the BBC, he added:

“I truly believe we are on the right path; we are all fully on board.”

24 hours before a north London derby, I desperately want to believe that the camp is united and determined to fix things. All the same, it’s not a game I feel optimistic about. Harry Kane and his giant wagging tongue taking Mustafi to the cleaners in July are still too fresh in the memory.

Laughably, Jose Mourinho wants us to believe that Kane is a doubt for Sunday. I can exclusively reveal that he’s talking absolute bollocks. Even if we tied him between two boats, covered him in milk and honey and invited flies and rats to have their way with his quivering body, he’d still be good for a brace off the bench.

Arteta wouldn’t be drawn into the mind games. Having worked with Mourinho at Barcelona, he knows the Portuguese all too well. At this point, his attitude is to kill him with kindness.

“He has a unique character and personality,” he told Arsenal.com. “He’s someone that I think in football we have to appreciate and admire.”

Personally, I think Mourinho’s a f*cking sociopath and I hope we make his Sunday night miserable.

I’d better leave it on that note. I can feel my pulse starting to rise already and that’s not healthy given what’s to come this weekend.

Blogs will be back tomorrow morning with a full preview of the match. With lockdown restrictions ending in Ireland, he decided to treat himself, Archer and Lana, to an early walk in the mountains. Sounds delightful.

I’ll be doing that if we lose.