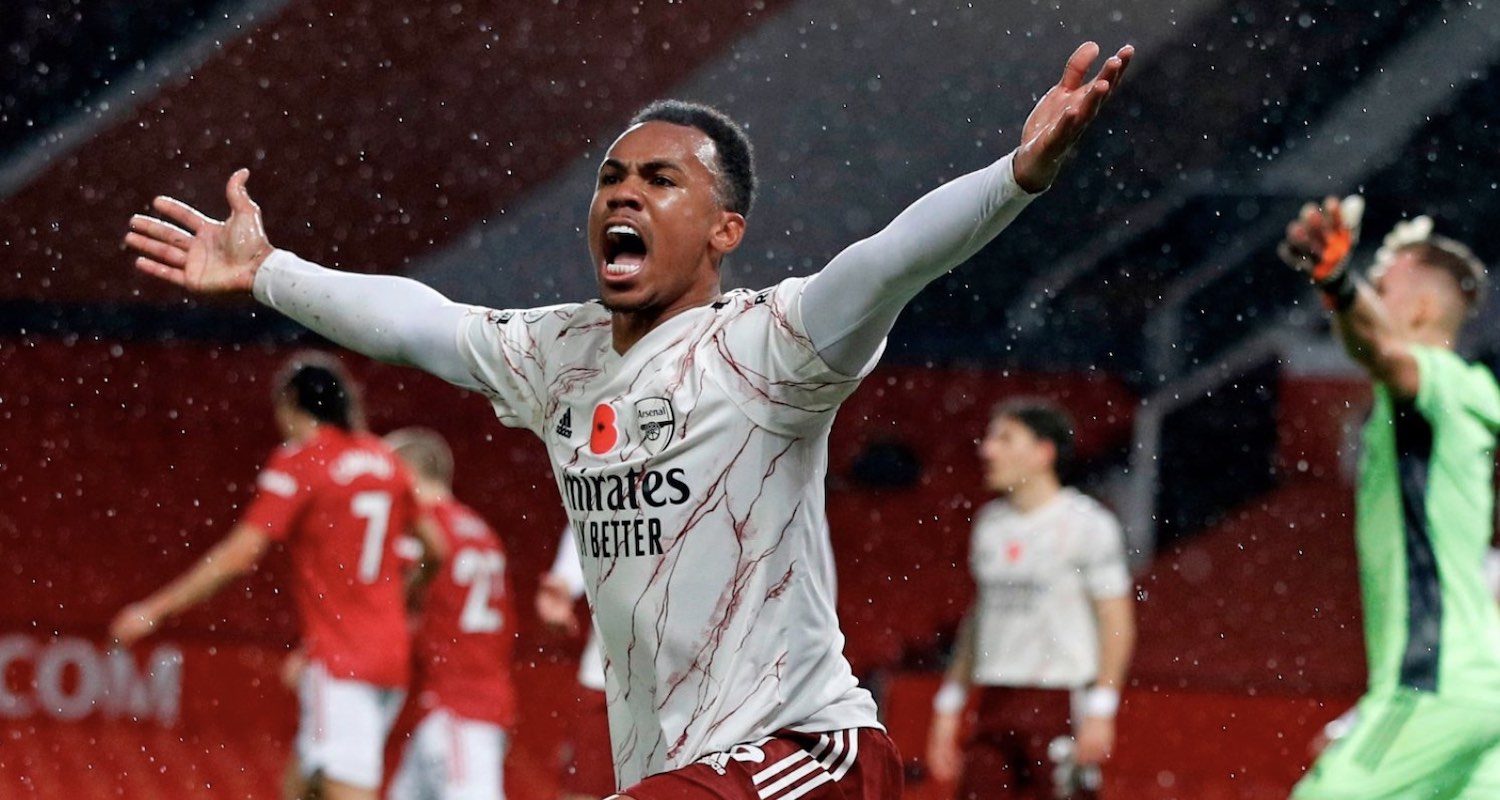 Every game comes with its own pressure, and going to Manchester yesterday, there was plenty on Arsenal and Mikel Arteta. After two consecutive defeats, we had to get something from this game. On top of that, you can’t go into one of these fixtures without being reminded that we hadn’t won away against one of the so-called ‘Big Six’ since 2015; not to mention the fact it was 2006 since we’d tasted victory at Old Trafford in the Premier League.

Rob Holding was a surprise return from injury, slotting into the back three; Mohamed Elneny kept both Granit Xhaka and Dani Ceballos out of midfield; and Willian came back into the front three with Pierre-Emerick Aubameyang and Alexandre Lacazette. From the start it was clear that Arsenal were on it, pressing high, making life really difficult for United who set up with the diamond that had worked so well in midweek.

Although Bernd Leno had one save to make, blocking a Mason Greenwood shot with his feet at the near post, we had the best chances of the first half. Hector Bellerin has more assists than anyone else so far this season, and it was his deliveries from the right which produced the most dangerous moments. Aubameyang stretched for one at the back post and couldn’t get there in time; another cross fell for the captain who played it back to Lacazette – the fresh air shot looked bad in real time but replays showed Lindelof got a touch to nick it away from the Frenchman; and late in the half the right-back created a superb chance for Bukayo Saka who headed over.

Aubameyang popped up on the inside right channel to combine with Willian, whose left footed effort skimmed the bar, and Arsenal should have been ahead at the break on the basis of the performance and the opportunities we made. Familiar territory, of course, because you could rewind to last Sunday and say the same about the Leicester game. Would we get punished again?

United changed it up a bit at half-time, a tweak in formation saw them start the second period with more possession, but not much more threat. Arteta’s team were organised, disciplined positionally, and putting in the hard yards to nullify United. Nobody encapsulated that more than Elneny who will have won himself new fans with the performance he put in yesterday. He has always been a pretty solid player, committed and hard working, but alongside the superb Thomas Partey he found a new dimension to his game. It’s too early to say this is the answer to our midfield issues, but there’s no question that it worked in a big game, which is really encouraging.

The Ghanaian international deserves a mention too. From a physical perspective he adds speed and mobility to that area of the pitch, but he can tackle, he passes it well, and in some ways having a player who is looking to move the ball forward transmits itself to those around him. 31 of his 55 passes were forward, he made 11 ball recoveries, 4 tackles, and 4 take-ons – showing he is willing to carry the ball too, something we really need in this team. On a big day, he turned up with a big performance which, I suppose, is what you expect from a 27 year old with all his quality and experience.

Bellerin’s sharp movement in the United box led to the penalty when a laboured Paul Pogba committed the foul. Aubameyang, without a league goal since the opening day – and well aware of our record at Old Trafford and in the big away games – might have felt some internal pressure, but from the outside he was as cool as you like, slotting the ball home convincingly to make it 1-0. A goal I think we deserved.

As often happens when you score at that point in a game, we began to sit deeper and deeper, looking to defend, and that’s always a bit nerve-wracking. I saw some suggestion Gabriel was lucky to get away with a second yellow, but I didn’t see that tackle worthy of a sending off, and overall the Brazilian was superb again. Again, I know it’s early days, but I love watching him defend. The timing of his interventions, whether it’s a tackle or an aerial duel, is superb, and even after he’d been booked in the first half he continued to compete properly rather than back off, scared by the yellow card. There was one superb last-ditch tackle on Matic, and a late clatter off the post when a cross hit Elneny, deflected onto Leno’s face and then the woodwork, but beyond that United had nothing to offer.

Their biggest danger was lumping it towards Harry Maguire, and defending against a lad with a head as big as a planet isn’t always easy, but for the most part we dealt with him pretty comfortably. We saw out four minutes of injury time, and that was that. A well deserved Arsenal win, and three very important points after the disappointment of the last couple of weeks.

First of all, the belief that we created before the game. We wanted to come here and be who we are and be that from the first minute. I think obviously if you look at the performance, every player needed to be at their best and they were. They asked a lot of questions with the way we played, so I’m really, really happy with the performance.

Clearly there was a game-plan, and while the starting XI wouldn’t have been many people’s first choice, it worked. I thought Lacazette was improved from last week, and even with Willian sub-par for me in the first half in particular, the way they executed the manager’s plan was impressive. United were smothered in the opening 45 minutes, prompting their own tactical shift in the second, but again Arsenal soaked it up, read the room if you like, and got on top again.

When you look at how the penalty came about, it demonstrates the kind of control and assurance we had. United gave the ball away at 65’22 – after that we kept possession, making 35 passes (with one touch for an opponent when a Tierney pass was blocked but came back to us), before Willian fed Bellerin on 67’10, which is when Pogba made the foul. If you want to put that down to a lack of aggression on United’s part, fine, but at 0-0, having been sucker-punched last week by Leicester, I liked that there was obviously belief in what they had been asked to do, and ultimately we got our reward.

It’s still a bit early to look at the table and draw too many conclusions. We sit in 9th but just two points off 2nd, and four off the top. We’ve got the best defensive record in the league having already played away at Liverpool, Man City and United, so that’s promising. The goals scored column is not what it should be though, that’s clearly still an issue and something the manager is aware of, but it’s not something to dwell on this morning. It was always going to be a tight game yesterday, and very pleasingly we came out on the right side of it.

Make no mistake, this was a win we needed: as fans we had to see a response to the last two games, and we got it, but this was important for Arteta and the players too. Victories like this raise confidence, and after being under some scrutiny for some recent results and decisions he’s made, the manager will be delighted his team produced that kind of performance at a ground where we have struggled for so long.

As ever, James and I will be recording an Arsecast Extra for you later.. As ever if you have questions or topics for discussion, send to @gunnerblog and @arseblog on Twitter with the hashtag #arsecastextra – or if you’re on Arseblog Member on Patreon, leave your question in the #arsecast-extra-questions channel on our Discord server.

Podcast should be up for you before lunchtime. Until then, as winter draws in and the days get shorter, bask in the warm glow of a big win away from home. It’s nice, we should do it more often.