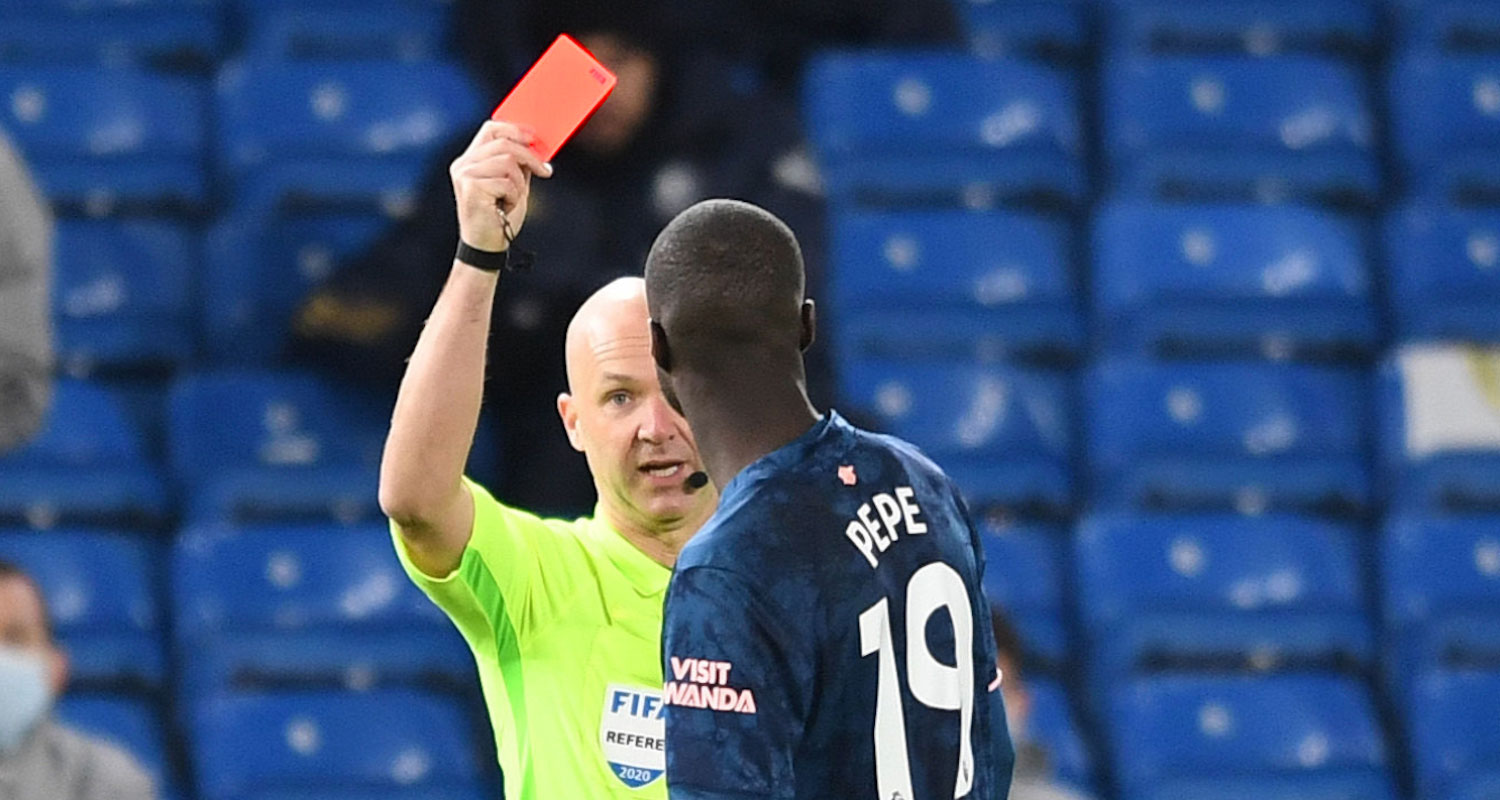 In the circumstances, Arsenal can have no complaints about taking a point back from Elland Road. In truth, we were lucky to get that, playing most of the second half with ten men and seeing Leeds hit the woodwork three times. Bernd Leno had to make a number of good saves as numerical superiority meant the home side dominated, and even if we had some moments where we might have done a bit better at the attacking end of the pitch, when you play that deep for so long, you need a bit of good fortune to get anything from the game.

Mikel Arteta started with Pierre-Emerick Aubameyang up front, flanked by Nicolas Pepe and Willian, with Joe Willock drafted into midfield. Some measure of change from the last game, but it didn’t really translate in terms of performance. Leeds out-shot us in the first 45 minutes, 13 to 5; they had more possession, 245 passes to our 150 – with 54 attacking third passes to our 25. Their commitment to winning the ball back was evident too, making 18 tackles to our 7. We weren’t really at the races and they had chances to be ahead at the break.

We made a half-time change with Reiss Nelson replacing Willian. At the time I assumed it was tactical because the Brazilian put in another overwhelmingly indifferent performance, but it turns out it was enforced, Arteta revealing afterwards that the former Chelsea man ‘was feeling something muscular’. It’s almost as if an unnecessary 7 hour flight to Dubai was a bad idea. Willian was one of the players who had no international commitments and should have been fresh, instead we had to use a sub at half-time. Just to be clear, I don’t have any problem with him not being on the pitch, but when you jet off for no good reason the way he did, you owe your manager and team a performance, and once more he failed to deliver. Don’t worry though, we just have another two and a half years of this to endure, I’m sure it’ll fly by.

Then, just a couple of minutes into the second half, Nicolas Pepe saw red for a head to head incident with Ezgjan Alioski. The two had been niggling at each other beforehand, there was a bit of pushing and then – off the ball – the Ivorian leaned his head into his opponent’s. It was not a headbutt, but it was more than enough for the player to throw himself to the ground as if it had been. Yes, the Leeds player completely made the most of it, but there’s no excusing what Pepe did, it was stupid.

You can’t complain publicly about your lack of game time, then do something as daft as that when you are given a chance. I really wanted him to do well yesterday, and there were some moments in the first half where he showed some genuine intent, but this was an opportunity to decisive at a time when the team really needs it. Freddie Ljungberg said on Sky that he thought he might be a match-winner, but he’s made a very significant rod for his own back now. It’s been clear that he’s player Arteta has doubts about, and this will have done nothing but cement those even further.

Speaking about it afterwards, Arteta deemed it ‘unacceptable‘ and I’m quite surprised this morning that so many feel he has failed to back his player in public. I think if this was a 50-50 and Pepe was a bit late, it’s different scenario. This was just so unnecessary and so stupid I don’t know what else any manager could say. He didn’t throw Pepe under the bus; Pepe saw the bus coming, knew it was a bad idea, and still chucked himself under it. He now misses the games against Wolves, Sp*rs and Burnley, and has a lot of hard work ahead of him to regain his place in the team.

Bukayo Saka replaced Joe Willock, and beyond the defenders who did their best as Leeds had another 12 attempts on goal in the second half, he was the small silver lining to Arsenal’s increasingly grey cloud. Some combinations with Kieran Tierney on the left were promising, and a superb ball delivered to him by Hector Bellerin provided our best chance of the game. It was one he probably should have scored, but I think it’s worth acknowledging how well the keeper did too. The sight of him down injured towards the end of the game was worrying though, but hopefully it was just a painful kick and nothing more serious. That this 19 year old Academy graduate, in his brief cameo, did far more than his much more expensive counterparts Willian and Pepe, shows how much talent he has, but also highlights how much of our resources have been sunk into those two for so little return.

Leno’s heroics, and the width of the post/crossbar, kept us in it, and helped secure our first draw of the season. In the context of the game, it’s a welcome point. It’s difficult enough against Leeds, but with ten men for most of the second half it’s even more so. Afterwards, Arteta said:

We have to take a point considering the circumstances. I’m never happy with a point but we know what a challenge we faced in the second half for 45 minutes with 10 men. The way we reacted to it, the resilience that we showed, the effort that all the players put in to try and overcome their advantage, it was phenomenal. At the end we have to take a point because, credit to Leeds, they had chances to score.

We can’t know how that second period might have played out with a full complement, and given Leeds hit the woodwork three times there’s no point talking about a potential handball that would have been a penalty for Man Utd, but this was another disappointing day. There wasn’t enough in that first half to take any real comfort from, and ultimately when you’re down to 10, it’s more a matter of survival than anything else. I think there was defensive commitment to be happy about, but I also saw some tameness in a few challenges in that second half that worried me a bit, a lack of commitment in some 50-50s that nags at me this morning.

It really feels like we’re stuck in a bit of a rut right now. We need something to help us get out of it, whether that’s a goal that goes in off someone’s arse or, ideally, one that comes from decent Arsenal play. The red card and the battle to hang on in some ways obscure the ongoing issues we have. The team is struggling, Arteta is struggling to get things running smoothly again, and it’s hard to see the light at the end of the tunnel when you’ve gone so many hours without scoring from open play.

All I would say is we’ve seen us be better than this in the not too distant past. It wasn’t perfect, it still needed to improved upon, but we’re capable of more. All the same, this remains a challenging period on Arteta’s career, and he’s going to have to think long and hard about how to get things working again. There’s midweek Europa League action, then a home game against Wolves next Sunday evening in the same time-slot as the Leicester and Villa defeats.

We need to avoid that unfortunate hat-trick in a big, big way.