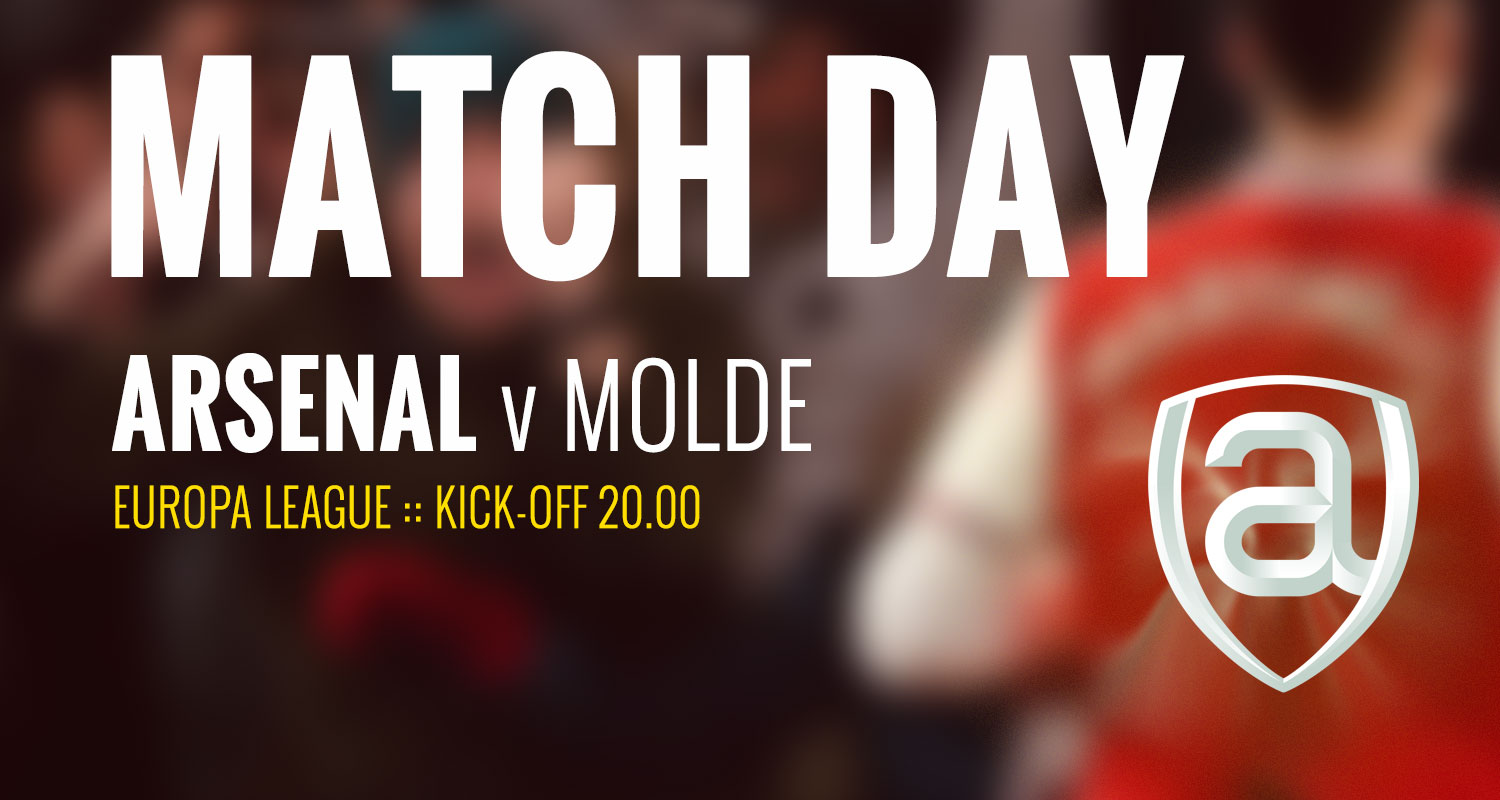 Europa League action this evening as the two top teams in the group meet at the Emirates.

Like us, Molde have won their opening two games, so it’s a true top of the table encounter, even if it’s a fairly uninspiring table – like a Formica one you keep things on in the shed rather than a majestic dining table stretching the length of an impressive room. And rather than stretch that flimsy metaphor any further, let’s look at team news.

David Luiz is fit again, and I suspect he might come back into the team tonight. As I wrote yesterday, there are encouraging signs when Rob Holding and Gabriel are partnered, so let’s keep them well rested for Sunday’s visit of Aston Villa. Shkodran Mustafi is fit again so that means there’s no need to take any risks back there.

As in the last game, I think we’ll see changes all over the pitch, and hopefully more playing time for the youngsters who impressed last week. Eddie Nketiah scored, as did Joe Willock, while Reiss Nelson had an impressive outing. I’d like to see all three start again, even if the selection of Willock in midfield might mean a more senior player like Dani Ceballos or Granit Xhaka has to sit it out.

I watched Willock in a press conference yesterday, and while it was fairly unremarkable stuff in general, he comes across as a really nice young man, determined to make it at the club he supports and has grown up at. He hasn’t played in the Premier League yet this season, but he’s not complaining about it. Instead he says he’ll keep working and giving his manager something to think about:

In every game I play, I need to ask the question, knock on the door with my performances. I don’t really like to speak, I like to show it on the pitch. I’m 21 years old and I want to compete with these players. I told Mikel that and it was very encouraging for him to support me and say if I play well, I’ll get the chance. That’s what I want to do right now.

Can’t argue with that. Interestingly, Arteta acknowledged the qualities that Willock has which are in relatively short supply among our current crop of midfielders:

he’s a player I really like. He has some special qualities that only he has in this squad, and that we have to use. I think you could see the last game he showed what he can do, to play in those pockets and to make runs into certain areas. He’s got the ability to make the box, his physicality and he’s grown in his understanding of the game and areas where he needs to be involved to affect the game. It’s growing all the time.

Encouraging for Joe, so let’s hope he can follow up on last week’s performance. I think we’ll also see Nicolas Pepe, because if he’s not starting in the Premier League, he has to start these games. It’d also be nice to see some involvement for Emile Smith Rowe who was considered a bit short fitness-wise for last week, but off the back of an injury could be in line for his first appearance of the season – even if it is from the bench.

As ever, we’ll cover the game for you on the live blog, which you can follow on your phone, tablet, or smart-fridge, as well as all the post-match stuff on Arseblog News.

Meanwhile, Arteta was asked a couple of times about Roy Keane’s remarks on Sky after the 1-0 win over Man Utd. Already in a foul mood because he’d seen his former club beaten, and because deep down in his cold, black heart he knows that Solskjaer is an absolute bust, he took umbrage at Pierre-Emerick Aubameyang refer to his manager by his first name in his post-match interview.

“He is the manager, the boss, the gaffer. That’s respect. Not Mikel,” he said. It does come across a bit ‘OLD MAN YELLS AT CLOUD’, but he’s obviously a product of the football environment he grew up in, so I know why that would bother him. But Arteta is 38, football has changed, the dynamics and relationships between players and coaches have to be different now, and it’s not something Arteta himself is concerned about. He said:

I only mention this because the next time we have a game on Sky with Roy Keane in the pundit box, I’d love to see the player giving the post-match interview use some names for the manager to drive him up the wall (obviously after we’ve won a game). Some suggestions:

That should see Roy’s head explode live on TV like the dude in that David Cronenberg movie. Bits of beard and foam everywhere as poor old Dave Jones frantically cuts to an ad-break, wiping sizzling hot brains – like lava rocks – from the front of his shirt. Hey, you’ve got to have things to look forward to.

Right, that’s your lot for now. Catch you later on for the game, and a podcast tomorrow.