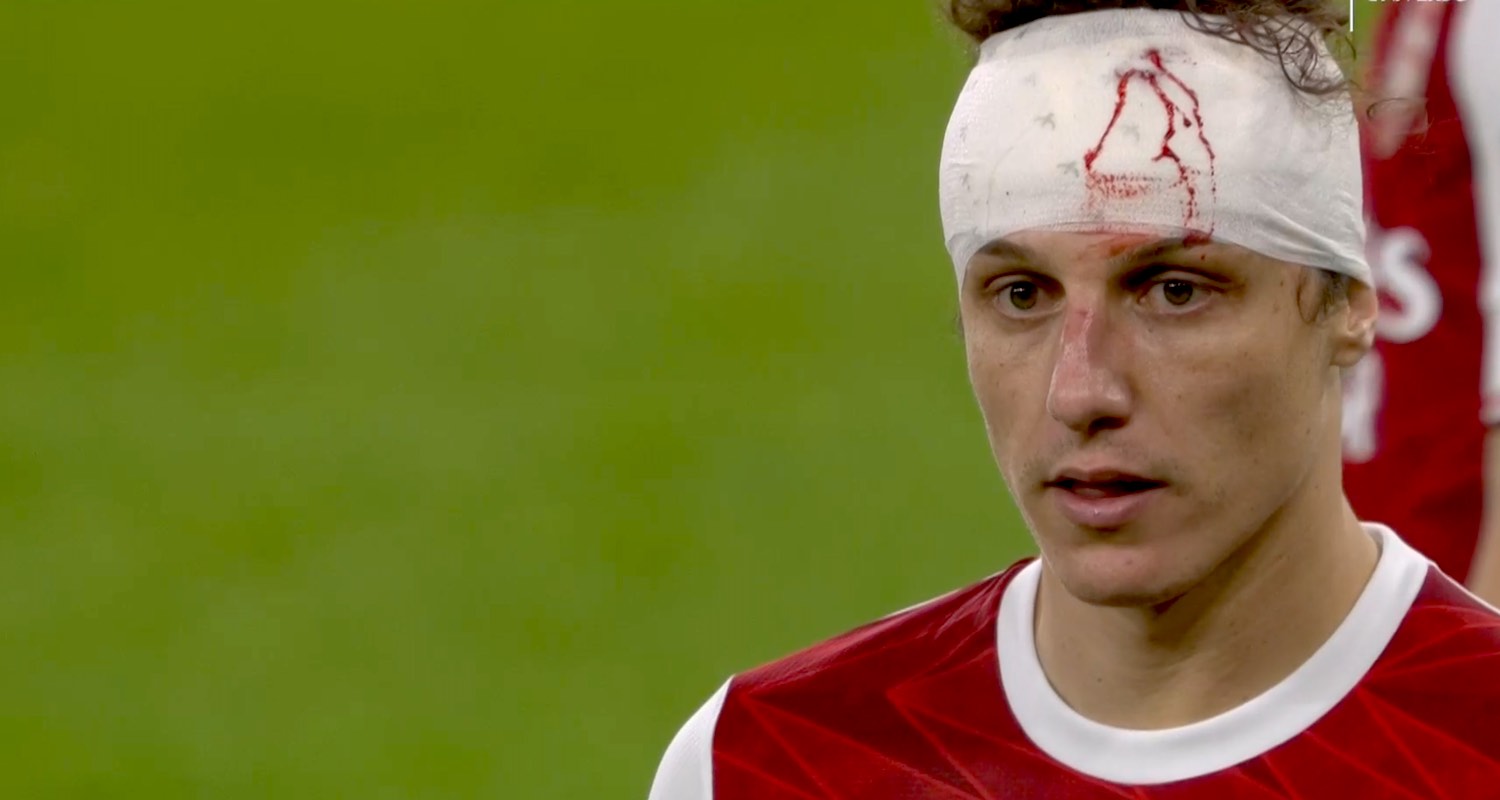 There were about four seconds after I woke up this morning when I existed in a peaceful place. Then I remembered Arsenal.

That’s not how it should be. Not in my mind, and not on the pitch. These are worrying times, another home defeat, another insipid performance, far more questions than answers, and a team and manager which is really, really struggling now.

The early part of the game was dominated by the collision between David Luiz and Raul Jimenez which left the Wolves man unconscious. I was watching without the fake crowd noise, and the sound of the two heads coming together – reverberating around an empty stadium – was sickening. Thankfully, after a lot of on and off-pitch treatment, Jimenez is reportedly conscious and responsive in hospital, and fingers crossed he makes a full recovery.

It’s an incident that should speed up the discussions about concussion subs. Head injuries are a very specific and dangerous thing, so much so that referees are instructed to stop the game whenever a player suffers one, regardless of how serious it might be. Mikel Arteta insisted afterwards that David Luiz was ok, that all the protocols were followed, but he played the next 45 minutes in something of a daze, blood seeping through the bandage around his head. He even thought he could get a free kick on target.

I don’t mean to be flippant, but Luiz should have come off at the same time. It should not have cost either side a substitute to make those changes, and the idea that somehow a rule which allows a ‘free’ change for a head injury would be exploited is essentially nonsense. It’s also impossible to say to what level Luiz’s first half performance was compromised by the collision, the discomfort of the injury, and perhaps even a measure of shock given the seriousness of what happened to Jimenez and his role in that, but you can’t even begin to convince me a player can play to his best level after something like that.

I also wish I could just talk about this rather than the football, and the fact that I’d rather discuss potentially catastrophic head injuries instead tells you plenty about what we’re doing right now. Wolves took the lead when Traore roasted Kieran Tierney, crossed it for Dendoncker whose header hit the bar, and as a static Arsenal defence stood watching (look how sluggish Luiz is), Neto slammed home the rebound.

Our response was decent. We made a good move down the left, Tierney’s cross for Aubameyang eventually ended up with a corner, and from there a Willian cross was headed home convincingly by Gabriel. Wolves lead had lasted just three minutes, and I’m sure Arteta will have been pleased by that.

But before the break they were ahead again. Traore was allowed do well in midfield as he fended off Xhaka too easily, the defenders backed off and backed off, and once more when a shot rebounded off Leno, our players were static, ball-watching, as Podence got there first, clipped it over Gabriel and under the keeper. To say we were caught on our heels is an understatement, but it was true all night, while Wolves played on their toes and that proved decisive in key moments.

Arteta spoke afterwards saying, ‘they had two shots on target and scored twice’, which distorts the reality of the five shots they had on target in that period. We had two on target. In the second half, chasing at least one goal to get something from the game, we had none. There were a couple of chances. Saka should have done better from a Bellerin cross, and Pierre-Emerick Aubameyang’s less than fully committed attempt at a header saw him put the ball wide when he should have hit the target at least.

Even when Wolves sat deeper and deeper, they weren’t unduly troubled. We made 98 attacking third passes, and 25 crosses in that second half without anywhere near enough threat. We played the kind of football someone like Olivier Giroud would have thrived on, without a player of a similar profile.

It seems like Arteta’s initial focus post-game was on what we do in the opposition final third, talking about “… the efficiency when we get into these positions and the quality of the delivery when we get there and the final product, it has to be much more consistent and better and this is the task that we have ahead of us.”

Yet there’s so much more to work on too. I know he is somewhat limited in terms of personnel, and the fact Thomas Partey is likely to be out for quite a bit longer than first expected is a real blow, but midfield was a massive issue yesterday. When you look how quickly Wolves moved the ball at times, then watched both Granit Xhaka and Dani Ceballos slow things down time after time after time it was maddening. There was a moment in the second half which summed things up for me – Gabriel was about take the ball and go forward, but Xhaka took it off him and leathered an almost uncontrollable pass to Rob Holding 20 yards back down the pitch in our defensive area. If only he’d hit some of his forward passes with such conviction.

I know Joe Willock has a long way to go in his career, but at least he tries to provide some forward momentum with his movement on the ball and his passing. It was his clever work that helped lead to the corner for our goal, and I like what he tries to do. However, it tells you a lot about this team and how it’s struggling that a 20 year old was the best player for us in a key area of the pitch.

So what is this team trying to do? For me, that’s the biggest concern. I really don’t know. We’re not a pressing team. We’re not a team that dominates possession. We’re not really a counter-attacking team unless we’re playing so-called ‘big’ opposition (a moniker that pretty much fits every Premier League team compared to us right now). We don’t shoot enough. We don’t create enough chances. We bang in lots of crosses to a striker whose game doesn’t suit that style of play.

What are we doing? What do we want to be? What is the vision? Is there a vision?!

Arteta talks about wanting his team to score more, to make more chances, but I can’t honestly sit here this morning and tell you how I think he’s trying to make that happen because I don’t know. I don’t have the solution. I can’t see what discernible tactical aspects of our play are designed to help us do that. We badly needed a goal in that second half we brought a second striker on in the 81st minute. The decisions he’s making leave him open to robust questioning right now.

I want him to succeed. I want the club to do well. I want us to play the kind of football that makes the opposition think, but as with so many of our games this season, Wolves had a comfortable night against us. It must be like a boxer facing an opponent whose punches feel like a velvet hand caressing your face rather than sparking you out and shattering your jaw. There isn’t a team in the Premier League, or indeed a decent one in Europe, who will look at Arsenal and be worried about facing us. And we’ve got a North London derby next.

What’s also concerning is that you can see some of this in the players too. Was Aubameyang’s expression when he emerged from tunnel steeled with determination, or the face of a man who knows it’s going to be a struggle again? It’s hard not to think it’s much more the latter than the former – and that’s not to make excuses for him either. He should have done better with that headed chance, but this is a team bereft of confidence, one that looks as unsure of what they’re supposed to do as we are watching on. At least we have benefit of stiff drink beside us.

The league table isn’t pretty. The stats aren’t pretty. The football is ugly. This is the worst start to a Premier League season after 10 games since 1981-82 (via @Orbinho). That’s the reality that Arteta and the club are facing right now, and there’s a very obvious need for marked improvement, and quickly.

Roy Keane said on Sky that the derby next Sunday could well be the best game for us right now, to provide the kind of focus and resolve that might get us back on track. I know what he means in general, and I hope he’s right, but I’m not at all optimistic this morning. Plenty for Arteta and his staff to chew on this week, because the alarm bells are ringing in a big way now.