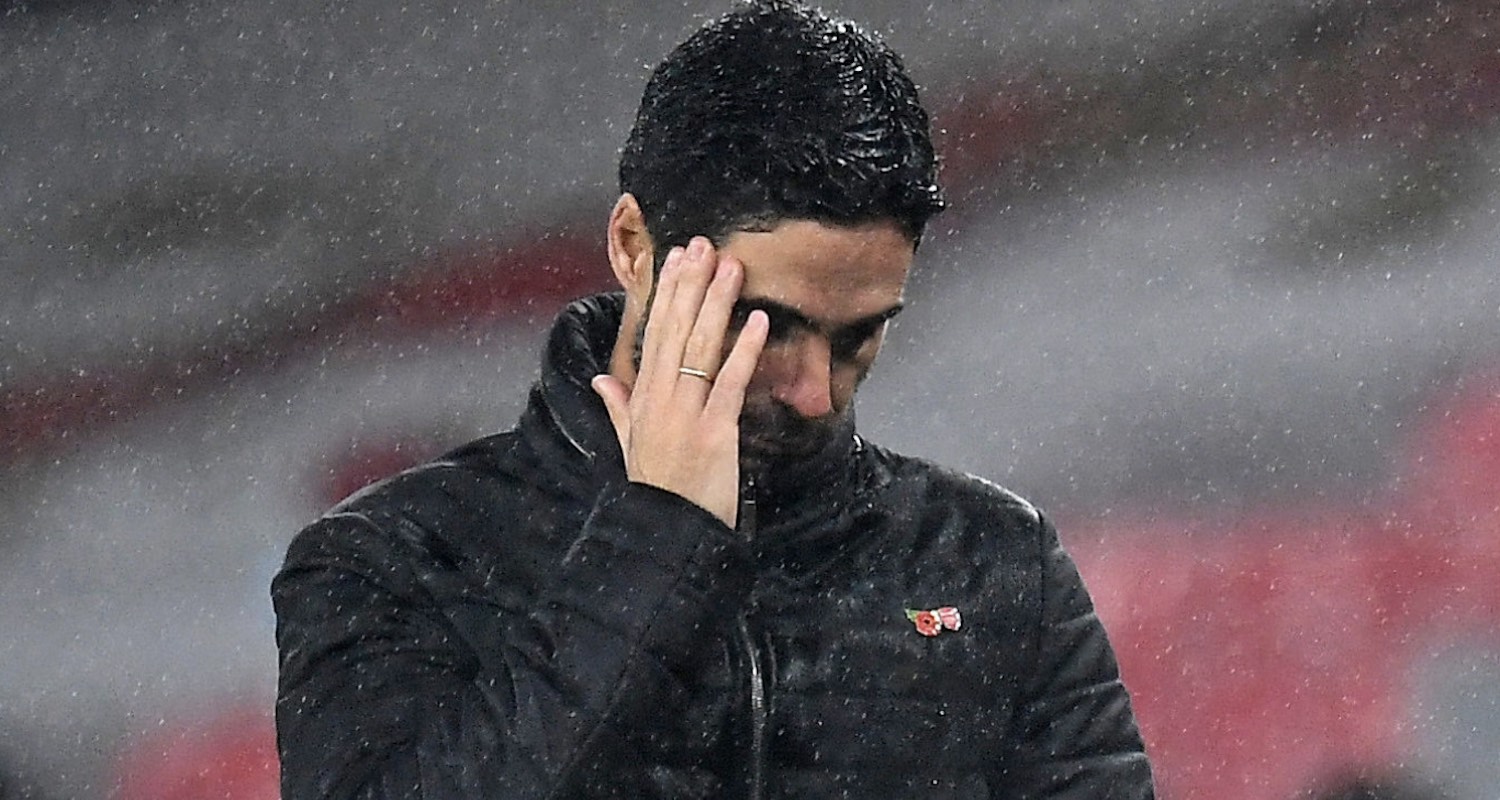 It’s very difficult to start today’s blog with a positive after a dismal 3-0 defeat to Aston Villa, but let’s give it a go. If Mikel Arteta’s rationale for not changing the team after the win over Man Utd was predicated on the players having earned their places, then after what we saw last night there will have to be changes because there were some bad individual performances in a miserable collective one.

Home defeats to Leicester and Villa so far this season shine the spotlight on what is emerging as a significant problem for the new manager. His record in big games against so-called big opposition is good, but when we play these teams we really struggle. Make no mistake, Villa were the better side on the night, and thoroughly deserving of their win and three three points, but as good as they were, we matched them with awfulness.

I don’t suppose it helped that we lost Thomas Partey at half-time, and the fact he picked up a thigh injury early in the first half meant he was probably hindered throughout that opening period. However, our troubles go much deeper than one man in midfield, and even so he was probably our best player in the first half. His replacement, Dani Ceballos, produced the best individual moment of the match from an Arsenal perspective – but the fact it was a stellar clearance off the line tells you everything you need to know about how we played.

I think VAR did us an early favour when McGinn’s goal was ruled out, but having seen one disallowed in similar circumstances a couple of weeks ago, I suppose there was a measure of consistency to the decision making. That we were cut apart so easily so early on was very much a warning sign though, and when Villa did score on 25 minutes, we’d already wasted a great opportunity to go ahead. Pierre-Emerick Aubameyang drove down the left and played a lovely ball back into the centre only for Willian to carelessly slash it about three miles over the bar – a moment which would go some way to encapsulate what was to come from the Brazilian.

It was his sloppy pass which gave possession to Villa, his defending was passive, he showed little desire to win the ball back after that mistake, and while he wasn’t alone back there as the visitors found the space for the cross which Saka ultimately put into his own yet, he was found wanting in a big way. For someone who is supposedly in the team to provide technical security, it was the very antithesis of that.

Nevertheless, we should have been level before the break when Kieran Tierney’s brilliant cross created a slam dunk opportunity for Lacazette. He could see it all the way, he knew where the ball was going to be, but somehow headed over the bar. It’s the latest in a series of dreadful misses from a player who is simply not producing enough in front of goal. He had just 15 touches before he came off, and while some of that is in part because of the role he’s asked to play and our inability to create as a team, it increases the pressure to make the most of the chances he does get.

That Villa’s centre-forward, Ollie Watkins, ended up with two second half goals shows that you can combine the hard-working attributes with end-product. He was a handful all night, his pace and mobility were obvious, he competed well in the air and gave our centre-halves problems, whereas Villa’s defenders could have set up a picnic table and sat around munching little triangular sandwiches with the crusts cut off for all the difficulty Lacazette posed them.

We brought Pepe and Nketiah on for the dismal duo of Willian and Lacazette, and initially there were some promising signs, but it was the visitors who scored again. We just did not compete or try hard enough to win the ball – or at least get in its way – for their second. Barkley’s touch across goal for Watkins’ close range header was excellent, but it was all too easy. As for their third, Jack Grealish running with the ball, showing strength and determination to drive forward, was like a man who exists on thin, watery gruel seeing a sumptuous banquet he’s not allowed to touch. What we wouldn’t give for some of that, a player who has the freedom to express themselves and the ability to do it. Again, we didn’t compete well enough, Watkins finish was good, and that was basically that.

We performed below our standards and I have to say that since I’m the Arsenal manager it’s the first time I’ve seen us play and we weren’t a team.

I take full responsibility. We didn’t start well enough, we got away with VAR for an offside situation but we lost all the races, the duels and we were sloppy on the ball. When we created chances to score we didn’t even hit the target. It’s a really bad combination.

As ever, solid words, but this defeat and this performance is one which demands some very serious introspection and examination from the manager. Whatever it is he’s trying to do with this group of players to make them more effective from an attacking perspective is not working, and it’s time for something different.

Does he need to let the shackles off a little bit, and allow his players to express themselves? Perhaps, but first and foremost it comes down to the way the team is set-up and the personnel he’s using. He obviously has a very specific role in mind for his centre-forward, but for me that’s the obvious place to start. We have rarely, if ever, fully clicked with Lacazette in that position, and his latest miss was simply not good enough. Physically, he cannot do the job week in, week out. He’s out of gas on the hour mark, if not before, and recognising his limitations is, for me at least, the first step.

Arsenal have a bona fide world class centre-forward, one that most teams in Europe would give their right arm for (even at 31), and we continue to waste him on the left. I don’t want him crossing for other players to smash their chances over the bar, I want him on the end of those deliveries. Start playing Aubameyang there, and work backwards. In Bukayo Saka and Nicolas Pepe we have two players who can combine with him to decent effect. Yes, they are imperfect options in their own ways, but it’s what I would do for now. With Reiss Nelson and Gabriel Martinelli potential additions to that front three when they’re fit again, we have options to at least try something else, because this just isn’t working.

As for Willian, the miss in the first half was followed up by another dreadful slash at the ball in the second, and frankly he is bringing nothing to this team. He looks like a player going through the motions, and the comfort zone he’s in with a three year deal which allows him to live in London seems obvious to me. I know one of the men responsible for that has departed, but when I wrote previously about how Edu still has work to do to convince us he’s the right man for his job, this is one of the reasons why. It was a great deal for the player, but increasingly it looks like an awful one for the club.

Arteta is a smart guy, he won’t be blind to our problems, or how painful our football is at the moment. Do you just keep doing the same thing over and over and hoping it clicks? Well, we’ve been doing that and it hasn’t, so what else is there but to find a new approach? The Interlull might be badly timed in some respects, but in others it gives him a bit of breathing room, a chance to take stock, to see what he’s getting from these players, and come up with a plan to improve things.

There were always going to be bumps in the road with a new manager as he learned on the job, but this feels like bit of a crossroads moment. There’s an inherent cautiousness to the decision making, which I understand to an extent, but it feels like Arteta needs to be a little less risk-averse, to be braver in the way he sets his team up and how he asks them to play. Right now, the biggest risk is sticking with what isn’t working, so fingers crossed we see something new when domestic football returns in a couple of weeks time.

Right, I’ll leave it there for this morning. James and I will be recording an Arsecast Extra for you later. As ever if you have questions or topics for discussion, send to @gunnerblog and @arseblog on Twitter with the hashtag #arsecastextra – or if you’re on Arseblog Member on Patreon, leave your question in the #arsecast-extra-questions channel on our Discord server.

Podcast should be up for you around lunchtime. Until then.