Home Arseblog, the arsenal blog Sp*rs 2-1 Arsenal: No case for the defence 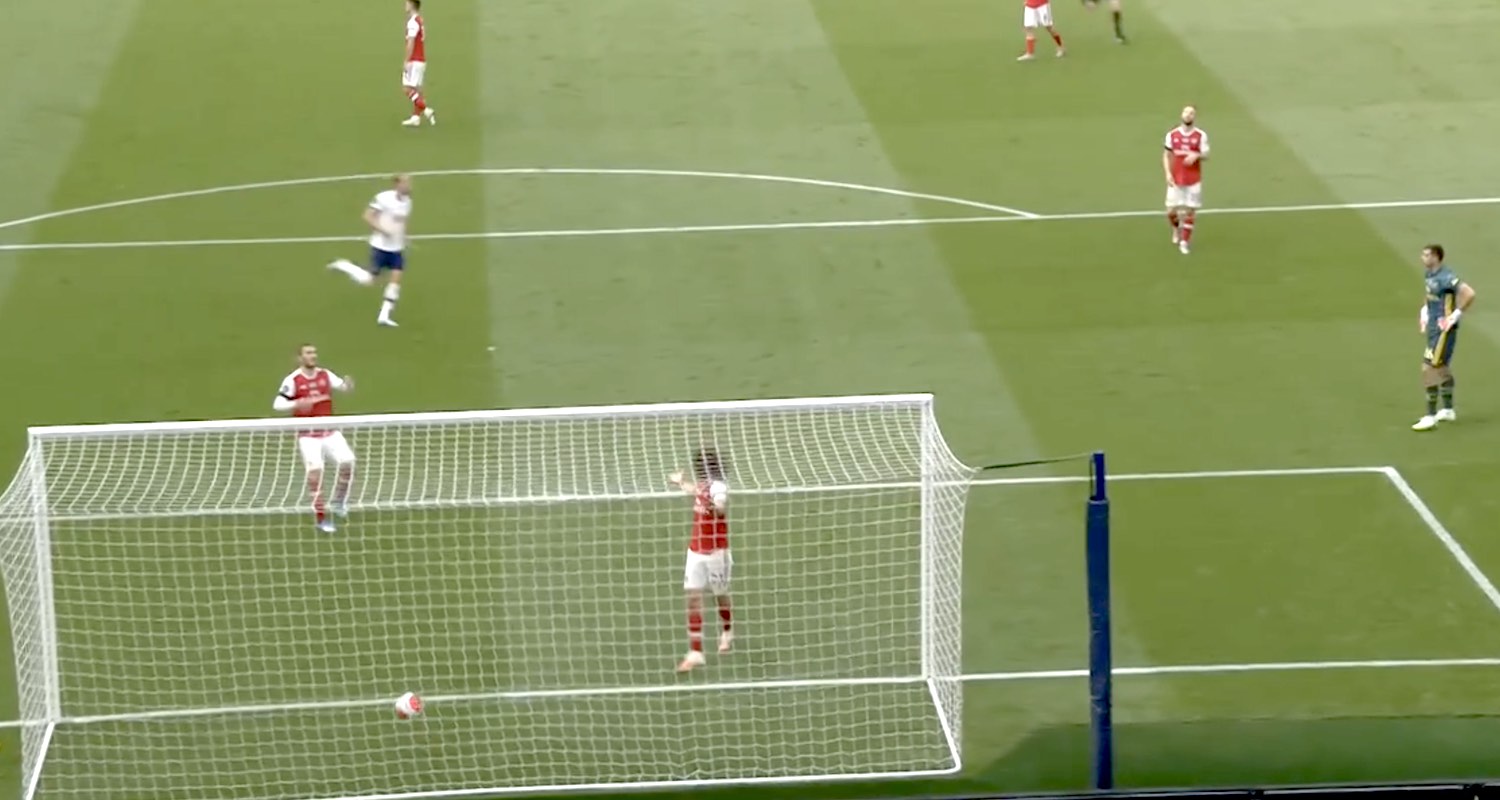 David Luiz’s first involvement yesterday was to lose the ball to Harry Kane just outside his own area, leading to a shot after just 16 seconds which Emi Martinez saved well from Lucas Moura.

Sead Kolasinac’s first involvement yesterday was to pass the ball straight to Harry Winks in midfield.

Shkodran Mustafi’s first involvement yesterday was to mishit a pass from just outside his own box straight to Giovani Lo Celso in the Sp*rs midfield.

If there was ever a portentous start to a North London derby, this was it. The final result was a reminder that unless Arsenal take squad building seriously and address the fact that we have a collection of highly flawed central defenders, days like this will always happen. We’ve given credit where it’s due for recent performances and results, but when you lose a North London derby it tends to hammer home the issues you have, and yesterday was an illustration of how personnel of this ilk will never be dependable and will cost you points.

Having gone ahead in the 17th minute through Alexandre Lacazette’s fantastic, thunderous drive into the top corner, all we had to do was not do anything stupid for a few minutes. Yesterday, as Kolasinac had the ball at his feet with myriad options available to him, he decided to play it safe and go backwards to Luiz.

He’s an unadventurous passer of the ball at the best of times, as part of a back three he’s almost afraid to play. Maybe he’s being told to be cautious, but he’s been a weak link in possession throughout the run of good results, and it came back to bite us right in the arse. His pass to Luiz was bad, so much so it was like a through ball to Son. The only positive from all of it is that the Brazilian didn’t pick up a red card as he has done in other similar incidents this season, but the Sp*rs man beat him easily and dinked the ball over an onrushing Emi Martinez to equalise.

We had been in front for 110 seconds.

Afterwards, Arteta suggested the reason he picked Kolasinac over someone who can actually pass a football like Rob Holding is because he didn’t want to change a formula which had worked. He wanted to try and keep that momentum going, which I understand, but it’s a dangerous game playing a defender who can’t really defend or use the ball the way a player in that position should. The manager paid the price for that yesterday. It’s been coming, unfortunately, and Kolasinac picked exactly the wrong day to do it.

The first half was pretty even in terms of possession and shots (6 each). Sp*rs rattled the bar and Martinez deserves credit for strong fingertips helping it on its way, as well as an earlier save from Kane after he ran off the back of a completely unaware Luiz; Pepe shot not far wide at the other end; Aubameyang fired a free kick wide (having previously missed a glorious chance from a Bellerin cross in his favourite central area); and towards the end of the half the microphones picked up Arteta demanding more of his team: “Come on guys, don’t be passive!”, he shouted, and Lacazette remembered to press.

The second half though, it felt like the sucker punch was coming right from the start. It was clear Sp*rs instructions were to let us have it, to sit deep, and to counter or use a set-piece. We completed 319 passes to their 80 in the second 45 minutes. Lacazette set up Aubameyang for a shot which he smashed off the bar when he really should have hit the target and changed the game. That was a big moment, fine margins and all that, because our general play up to that had been quite good.

When you don’t take your chances though, you get punished in this league. We know this. You could sense the tension creeping into our game. On 70 minutes, something happened to Mustafi. Early in the first half, Sp*rs had played a ball quickly down the inside-left channel, and the German defended really well. He stayed on his feet, watched the ball, and blocked a cross out for a corner. You notice things like that because historically it’s not what he’s always done.

Then, with 20 minutes to go, this new improved Mustafi reverted back to the old one. It was like someone had lifted a spell or something. He let Kane get the wrong side of him, leading to danger which Martinez did well to deal with. He started going to ground again, sliding around like Slidey McSlideyface. It was, frankly, remarkable. Watch the moment on 82’35 when Kane is running into our box and he just leaps to make a sliding tackle but gets nowhere near his opponent. It’s as if he was tackling a phantom player none of us could see. Look at how Luiz and Kolasinac leave a free man for a potential rebound too. It’s abysmal.

Their winner came from a corner, won after Kane had again run the channel between Luiz and Mustafi. The Brazilian doesn’t even bother trying to defend, his lack of awareness and physical ability this late in a game made it easy for the Sp*rs striker. Again, Martinez stood up well and they won a corner. A few weeks ago I raised concerns about our defensive organisation from set-pieces after that Brighton goal, and I’d question why Kieran Tierney (5’10) was marking Toby Alderweireld (6’2). The Belgian nodded home from a good delivery, and there was the sucker punch, there was the kick in the bollocks.

Arteta’s late changes and a formation shift didn’t trouble Sp*rs unduly, and just like the first North London derby he played in, it ended in a 2-1 defeat for Arsenal. An inauspicious afternoon for Arteta, and like any manager he gets the props when the team win, and questions are asked when we lose – particularly this fixture. That’s the nature of the beast. He knows that fine well. And while yesterday was clearly not his best day in the job and losing a derby always hurts, you have to hope that these are things he will learn from in the nascent stages of his managerial career.

I think there are concerns about how we attack, no doubt about it. Aubameyang had his moments but always felt kind of peripheral in this game; our main striker is playing with his back to goal too often, doing more work in midfield than in the final third; and while Pepe had some flashes, it was another day when it didn’t quite work out for him. A lack of midfield creativity is another glaringly obvious shortcoming too, but I just can’t get beyond how bad our options at centre-half are.

No club with serious ambitions could realistically hope to achieve them with the players we have. It’s to Arteta’s credit that he fashioned some kind of working unit out of them, but those on high, those who have built this squad, need to sort this out when the transfer market opens because if we persist with players who simply cannot produce consistency then we’ll continue to suffer days like yesterday. When Arteta recently spoke about the need to improve the squad, I sincerely hope he was talking in no small part about our defenders.

It was Three Stooges stuff at times yesterday. I know we’re not replete with options, but please let the Kolasinac experiment end and he can go back to being a back-up left back, a defender who is more effective the further he is from the defence, before we sell him at the end of the season. Let’s give Rob Holding a run, this idea that we need a left footed player in that position is absolute nonsense, and at least there’s still some potential in him as opposed to someone we know just isn’t the right fit.

And I don’t even know what to say about Luiz anymore, other than to say our dependence on a 33 year old with almost no motivation left in his career or for this club seems emblematic of the way this squad has been put together. He and his agent were reportedly pushing for a two year contract, hence the stand-off during lockdown, but someone had the good sense to veto that. However, it’s bit like only shooting yourself in one foot and thinking you’ve achieved a victory because the other one isn’t a bloody mess with stumps where your toes used to be.

I dunno. I just don’t see how you make genuine progress with these players, so all I can do is hope that there’s someone involved in recruitment at this club now with an eye for a defender or two. It’s the single most important part of what we need to do when the market opens, and if we don’t get it right, asking any manager to improve things seems ludicrous.

For more in-depth discussion of the derby and the performance, James and I will be recording an  Arsecast Extra for you this morning. As ever if you have questions or topics for discussion, send to @gunnerblog and @arseblog on Twitter with the hashtag #arsecastextra – or if you’re on Arseblog Member on Patreon, leave your question in the #arsecast-extra-questions channel on our Discord server.