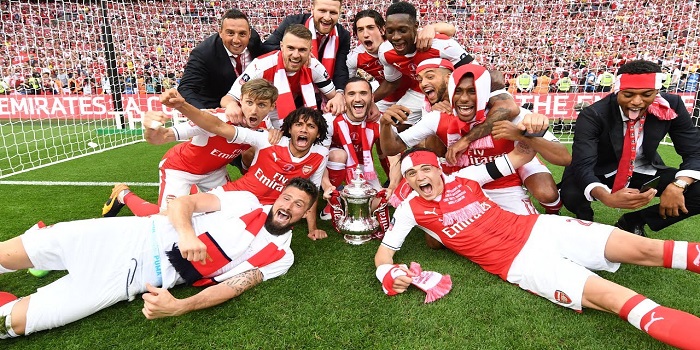 To differing degrees and for separate reasons, Arsenal and Chelsea have placed greater stock in their academy players this season. Recently, for the crunch games, both Mikel Arteta and Frank Lampard increasingly opted for experience as the season wore on. The average age of Chelsea’s starting line-up in their FA Cup semi-final victory over Manchester United was 27.

Meanwhile, Arsenal’s sole academy presence in the semi-final against Manchester City was 22-year old Ainsley Maitland-Niles. The average age of the Gunners starting line-up at Wembley was 25.7. I would expect both teams to have a similarly experienced tinge on Saturday. For Arsenal, they have fared better in recent weeks playing on the break and this game could suit them in that respect.

Chelsea have opted for a back three against some of the bigger teams this season but they tried that at the Emirates in December and were forced to abandon it and revert to a back four after half an hour- a system they maintained in the reverse fixture. I expect them to opt for a 4-3-3; Caballero; Azpilicueta, Rudiger, Zouma, Alonso; Jorginho, Kovacic, Mount; Willian, Pulisic, Giroud. Here are the head-to-head match-ups that I believe will define this final.

Alexandre Lacazette v Jorginho
Arteta has opted for an inverted v in the front line in recent weeks, with Lacazette dropping into midfield to combine with Xhaka and Ceballos and look to whip passes out to the flanks, where Arsenal create most of their chances. The Frenchman will also provide a valuable defensive role on Saturday.

Jorginho was briefly out of favour at Chelsea at the beginning of lockdown, but injuries to Gilmour and Kante have seen him reinstated. If Chelsea opt for their usual 433 they could outnumber Xhaka and Ceballos in the Gunners engine room. Lacazette ‘marking’ Jorginho will be crucial in ensuring this doesn’t happen.

Likewise, one of Arsenal’s wing-backs will probably look to shuffle in-field and make the numbers up in possession. Broadly speaking, Xhaka will be charged with marshalling Mason Mount with Lacazette standing on Jorginho’s toes. There is a further risk that Matteo Kovacic could end up being a ‘spare man’ in possession.

Ceballos can’t afford to get too sucked into a confrontation with Kovacic otherwise it risks leaving the wide areas open for Pulisic to isolate Arsenal’s right-back. For Saturday to go well, Lacazette is going to have to play two roles simultaneously- as a creator on the counter for Pepe and Aubameyang and as a disruptor to stop Jorginho from controlling the midfield as he did when the sides met in December at Emirates Stadium.

Nicolas Pepe v Marcos Alonso
In recent weeks, Arteta has freed the right wing-back up to provide an overlap to Pepe on the right, allowing the Ivorian to play less like a winger and more like an inside-forward. Alonso and Pulisic provide attacking threat on the Chelsea left but neither is as strong working in the other direction. The Blues conceded 54 goals in the Premier League this season with good reason.

Pepe’s success at Lille was largely as a catalyst for counter-attacks, he looked much more comfortable in that role against Manchester City in the semi-final too. Alonso earned condemnation for his half-arsed jog back towards goal as West Ham countered for a stoppage time winner against Chelsea a couple of weeks ago. Pepe will look to extract similar change from Alonso on Saturday evening.

David Luiz v Olivier Giroud
By now, we all know that when David Luiz is good he is great and when he is bad he is terrible. The Brazilian was imperious in the semi-final against City. Playing in a deep block suits him more in his advancing years and against City, he was able to bully Gabriel Jesus and defend the penalty area with a series of aggressive interceptions in tight spaces.

Bullying Gabriel Jesus and bullying Olivier Giroud are very different feats, however. It’s not just Giroud’s physical strength that is a worry- but his ‘soft feet’ in the area. Pulisic likes to drive inside and use Giroud as a sounding board in the area and that has to be a worry against a centre-half who has conceded five penalties this season. I don’t see any way that Arsenal can win this final without seeing the good side of David Luiz.

Whoever plays at right wing-back v Christian Pulisic
The wing-back positions provide Arteta with his most significant dilemma. The midfield and forward positions are virtually decided and we’ve an excellent idea of who at least two of the centre-halves will be. On the right of their attack, Chelsea play Willian who likes to go outside against his full-back and get deliveries in for Giroud, while on the left, Pulisic likes to dribble inside and combine with the former Arsenal striker.

The American is also good at finding his full-back partner and creating overloads. Arteta will almost certainly pick two of Bellerin, Saka and Maitland-Niles for the wing-back roles, with AMN an option on both sides. Equally, Arteta could bring Kolasinac in as a left-sided centre-back and play Tierney at left-wing back.

Whether the right wing-back is Bellerin or Maitland-Niles, both will have to be mindful of Pulisic’s quality on the dribble but also on his ability to create overloads with Marcos Alonso. Arsenal’s right-back will have to find the balance between minding both threats. They will also need to ensure the team has options on the ball in possession and that means they have to operate as a midfielder too.

It is going to be an exceptionally trying task, physically and mentally. Maitland-Niles was, in truth, taken apart by Hazard in Baku last May but he might be stronger for that experience and as good as Pulisic is, many have been taken apart by Hazard. If Bellerin’s calf is still tight they cannot afford to take a risk in a key area of the field.