Home Arseblog, the arsenal blog Arsenal 4-0 Norwich: Goal glut on a good day for the Gunners 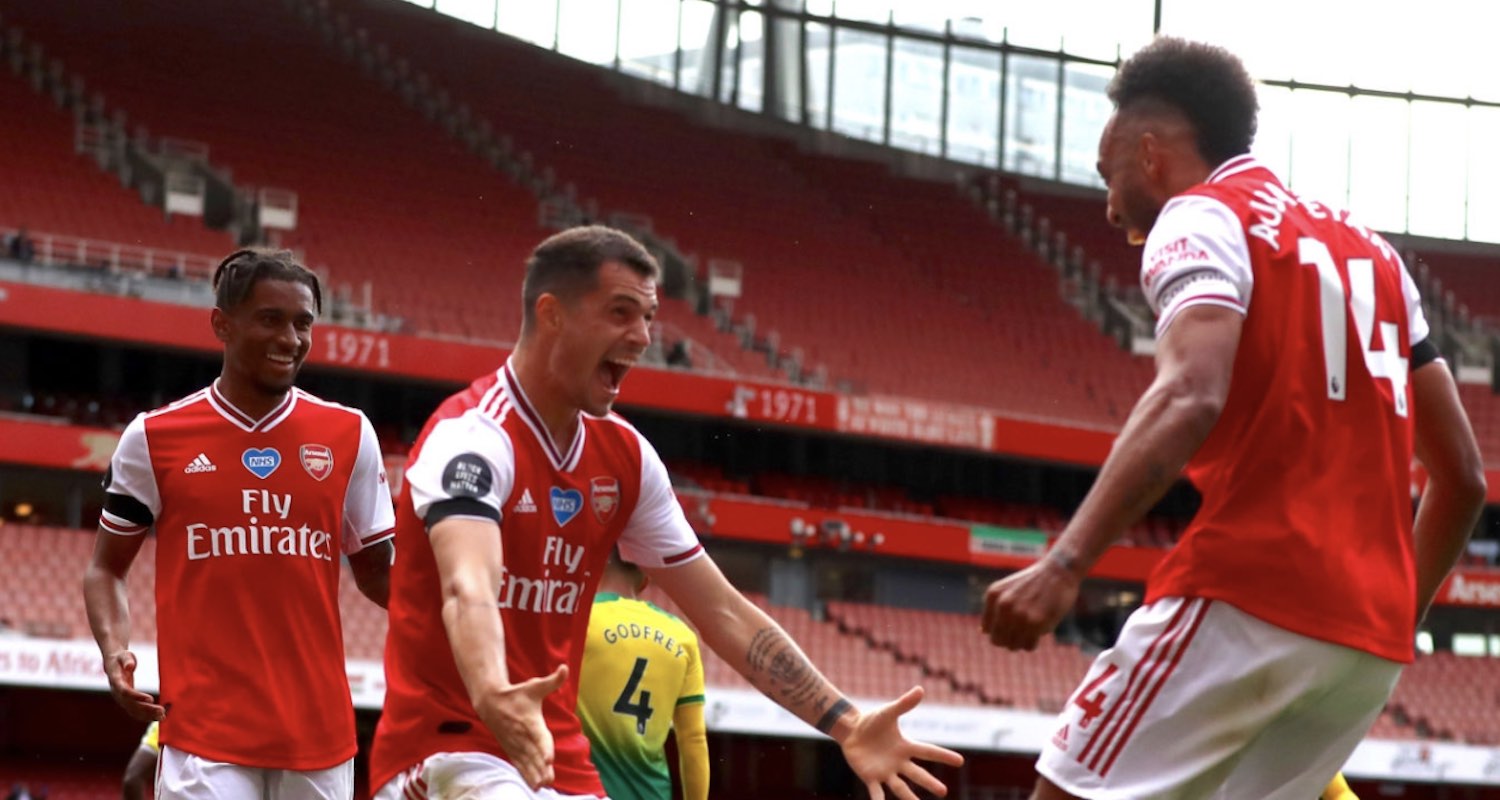 When you beat the team bottom of the league 4-0 at this stage of the season, there isn’t usually a lot of analysis required. In this case, circumstances are different, so there are some things to touch on this morning. I’m going to do them point by point, player by player, rather than the usual match recap.

That he scored two goals is not really a big surprise. The nature of them is worth exploring though. The first came when he chased down Tim Krul who, hilariously, thought he could bamboozle the striker with a cut back. Reader, he could not, and I actually laughed out loud and pointed at the telly like the Haha lad from the Simpsons because I remember his history with us. Easy finish.

The second came when he capitalised on another mistake, picking up a loose pass and making it 3-0. The finishes themselves aren’t the thing. It’s his awareness. His ability to sniff out a chance, like some kind of apex predator. The fact he is always on his toes, so rarely caught on his heels. Those are instincts you can’t really teach, you have to have them.

He also got an assist to top off his night, and his new record of getting to 50 Premier League goals in fewer games than anyone else in our history is made even more remarkable when you consider the fluctuating fortunes of the club since he joined.

I know there’s a decision to be made, but more and more I’m leaning into the idea that even if he doesn’t sign a new deal, just keep him for the last 12 months. What he brings to this project is almost beyond words. Those goals are so valuable to us, and if there are funds to be raised, there are other candidates to be sold.

I’m a bit long in the tooth to get over-excited, but Mikel Arteta’s positive comments after the game about how Auba is ‘willing to stay with us’ and ‘know what we’re trying to do’ are encouraging. It sounds like the manager is putting up to the board to make it happen because he knows just how vital he is to what he is trying to build at the club right now. When you consider some the things we put resources into, it makes this even more of a no-brainer.

He had his best game since Burnley back in August, and what made it so interesting to me is that throughout Mikel Arteta was constantly talking to him. You could hear the shouts of ‘Dani! Dani’, followed by some instructions – mostly to do with his position on the pitch. It led to him making four interceptions, but his decision making and use of the ball was much better too.

On the one hand you can question whether that level of in-game coaching is sustainable, and whether it would even be possible under normal circumstances when the crowd drowns out the manager on the sideline. On the other though, maybe it’s the kind of game you really learn from. I’ve been underwhelmed generally by Ceballos, but last night he showed there’s some talent there. Consistency? We’ll wait and see, and Arteta spoke afterwards about communication between us and Real Madrid, whether that’s about another loan or something more permanent we’ll find out in due course.

Make no mistake, the Arsenal keeper was an important part of the win last night. His great save late in the first half from a free kick was surpassed by an even better one early in the second, getting down low to hang onto a stinging drive which needed him to have sticky hands at full stretch. I’ve been impressed with him since he came into the side for Bernd Leno, and this was another good performance.

Full backs and back three

It was great to see Hector Bellerin get forward more than he has in recent games, overlapping down the right hand side. The delivery, the final pass wasn’t always there, but the intent was the most pleasing thing. On the other side Kieran Tierney is a fantastic outlet, and looks like he and Aubameyang are finding the right wavelengths to get on. That substitute Cedric got forward to score on his debut was a lovely way to end the scoring, but in terms of the system, seeing Bellerin and Tierney in tandem that way was nice.

David Luiz looks like a completely different player in a back three too. He’s the clown from IT in a trio, he’s much more Krusty in a back four. I know Arteta is having to manage his squad carefully, Mustafi started his 5th successive game and had to come off at half-time, but I’d like to see Rob Holding given more of a chance on the left hand side of that three. I just feel like we lose something with Kolasinac when it comes to our ability to make progressive passes from that area of the pitch. His stats were tidy (91.5% pass completion), but 62% of them were backwards. When you’ve got someone like Tierney outside you, you’ve got to find him more often and more quickly, and Kolasinac is not the quick-footed kind of player to do that.

One of the things we’ve spoken about a lot is Arteta’s in-game management, not just substitutions, but reacting to what’s happening in the match. At half-time Norwich changed their system, and we struggled to cope. The introduction of Joe Willock, to give us an extra man in midfield helped address that. I thought Nelson was a touch unlucky to make way, I’d have had a closer look at Lacazette to be honest, but it worked out.

Yes, we were helped by Norwich making a mistake from which Aubameyang scored his second – a goal which really knocked the wind out of them – but it was pleasing to see he addressed the overload in midfield with a change designed to counter their dominance in that area of the pitch.

If you were to ask anyone which current Arsenal midfielder do you think would be bursting into the box to get on the end of a sweeping move, I think the last name on your list would be Granit Xhaka. Kudos to him though, his finish was excellent, as was his desire to get forward, and just days after Arteta demanded more in terms of goals and assists from his central midfielders, he got it.

Once more Matteo Guendouzi was absent from the squad entirely. Asked what needs to happen for him to return, the manager said, “Things have to change and nothing has changed.”

We don’t have the details of what’s happened, sounds like pure intransigence/petulance on the part of the young Frenchman, and it’s a bit of a shame really. It looks as if he couldn’t see what an opportunity he had, at his age, and at this point of his career, to become a fundamental part of a rebuild under a new, exciting manager. He had a disciplinary issue just a few weeks into the new regime, and now there’s no question he’s fallen foul once more.

He’s either a very silly boy, or one who is being very badly advised. Perhaps both. It’s hard to say definitively if there’s a way back. A couple of injuries or suspensions might open the door again, but if there’s this kind of incompatibility in the relationship between him and the manager after just 6-7 months, it doesn’t augur well for his future. And going back to the point about selling players to raise funds, his age and contractual situation makes him a serious candidate for that.

The game, the goals, the clean sheet, all capped what was a good day for Arsenal overall. Earlier, we had the Bukayo Saka contract extension news. He signed a four year deal which secures him until 2024. I saw people complain it wasn’t longer, that we’re gonna have to have ‘the conversation’ in two years time, but so what? If you were a talent like him, you wouldn’t tie yourself down into a longer deal, and hopefully when the time comes there’s nowhere else he’d rather be anyway. It’s in our hands, and it is our responsibility to ensure Arsenal is the kind of club he can fulfil his potential and ambitions at.

It is good news though, a positive development and fans have every right to be happy about it. It’s something James and I will discuss in more detail on the Arsecast Extra, so please tune into that. Subscribe in your favourite podcast app by searching for ‘arseblog’ or ‘arsecast’, or listen on site here when we publish later on.

As ever if you have questions or topics for discussion, send to @gunnerblog and @arseblog on Twitter with the hashtag #arsecastextra – or if you’re on Arseblog Member on Patreon, leave your question in the #arsecast-extra-questions channel on our Discord server.

The podcast will be out for you before lunchtime, or thereabouts. Until then, take it easy.