So some Arsenal players turned up to London Colney for individual training sessions yesterday. Apparently they each have their own ball to work with – no doubt someone has got a permanent marker and written their initials on it – and a vast expanse of pitch to maintain social distancing.

I saw that the Evening Standard proudly ran a story about how they had pictures of the players training. What we actually got were some images of players leaving in their cars behind tinted windscreens, and a screenshot of a Sky Sports News report which featured an aerial shot of our training ground which really made me laugh. 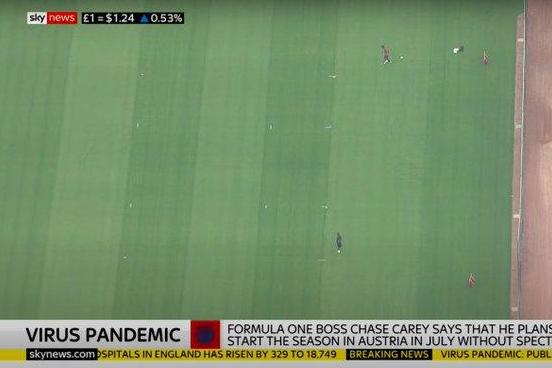 I know these are difficult times, but what did they use to take this photo? You can go to your local Aldi and in the aisle with the power tools, fishing nets, inflatable paddling pools, and dinosaur costumes, you can pick up a drone with a 4K camera on it. This looks like someone got some balloons and sellotaped a mobile phone from 1998 to them. This is how desperate we are for football – pictures taken with a potato are deemed worthy of publication.

In terms of the players who showed up, we saw Granit Xhaka, Alexandre Lacazette, David Luiz, Emi Martinez and Cedric Soares. The latter has yet to play a game for the club since signing while injured in January. Amazingly, he is not yet the player to wait the longest for his debut after signing on loan for the club. Andrew Allen did the research and number one is Czech striker Michal Papadopulos, who had to wait 124 days after his arrival to play his first game.

Grandad, how did you spend the virus lockdown of 2020?

Well, I spent half a day working out which outfield loan signing had to wait the longest before making their Arsenal debut.

He joined us from Banik Ostrava, and I found mention of him in the Arseblog archives, from April 28th 2003:

Transfer speculation around Arsenal will be intense this summer I suspect, and it’s started already. According to Planet Football, Arsenal want to sign Banik Ostrava striker Michal Papadopulos. No, I’ve never heard of him either but he’s Czech and according to quote attributed to AW in the Czech press “He will be a star within a year.”

Also on the cards is a move for his Czech mate, goalkeeper, Peter ..er…Cech. Agent Pavel Zika says “Wenger and other people can’t understand the fact that Petr Cech is the best (keeper in the world) now, when he is just 20. It’s interesting. They are not sure with Petr Cech but, with Papadopulos, they want to sign a contract immediately. Michal attended a training session with Arsenal on Wednesday, and Wenger was very pleased.”

That’s quite funny, isn’t it? We weren’t sure with Cech, who went on to be one of the most successful goalkeepers in Premier League history, but we went full tilt on the young striker who ended up making just one appearance for us. That was a seven minute cameo at the end of a 5-1 win over Wolves in the Carling Cup, a game notable for the fact that Cesc Fabregas became our youngest ever scorer as he tapped one in in the 88th minute.

To put his challenge in context though, as well as not being quite at the level required, Papadopulos had some serious obstacles to overcome to get into the team – in the shape of Thierry Henry, Dennis Bergkamp, Sylvain Wiltord, Kanu, and Jeremie Aliadiere. Later that season we broke our transfer record to bring in Jose Antonio Reyes from Sevilla, while a young Robin van Persie signed in April.

Amazingly, he is/was still playing, beginning the 2019-20 season with Polish side Korona Kielce, arriving there via Bayer Leverkusen, Energie Cottbus, Mlada Boleslav, Heerenveen, Zhemchuzhina, FC Rostov, Zagłebie Lubin, and Piast Gliwice. Arsene was always a sucker for a young striker though, hoping to unearth a hidden gem, and to be fair, I think we did try and sign Cech but work permit issues got in the way. It’d be fair to say though that if you were to point to a flaw in his recruitment down the years, goalkeeper would probably be it.

As for Cedric, that he’s now taken longer to play for us than Kim Kallstrom is quite something, considering the Swede arrived with a broken back. Sure, he didn’t have to contend with a worldwide pandemic, but still. In a weird way though, I suspect this increases his chances of signing for us permanently. We have no idea yet what the transfer market is going to be like when football begins again, but I suspect that player values will plummet due to the financial pressures clubs find themselves under.

If you have a player who is right there, whose agent is a big mate of your Head of Football and your Technical Director – and who watches games from the Director’s Box – then it’s an easy deal to make without having to worry about the hassle of the market itself. It’s something that will also have an impact on potential sales too.

Under ordinary circumstances, a player like Pierre-Emerick Aubameyang would command a big fee and wages commensurate with that fee if Arsenal decided to cash in rather than let him leave for free in 12 months time. Now though, beyond one or two super rich clubs who won’t be impacted because of their ownership, who can afford those kind of fees? If the fee is lower, the offer of salary might also be lower, and it might make sense for a player to decide to stay.

It still leaves Arsenal with an issue though, because how can you give a player who is pushing 31 (but until then remains 30 because that’s how it works), a new deal when you have no idea when football will begin again? It’s different for someone like Bukayo Saka, because at 18 he represents the long-term future, but it’s more complicated for a player of Aubameyang’s age.

As I said on yesterday’s Arsecast Extra, I don’t think we’ll really know what the impact on transfers is going to be until stuff starts happening and we can see patterns emerge. And we’ve got plenty of time to wait for that to go down. Speaking of the podcast, I’ll leave you with it below, have a great day, happy listening, more from me tomorrow.

Previous articleArsecast Extra Episode 346 – 27.04.2020
Next articleFrance cancels football: what next for the Premier League?