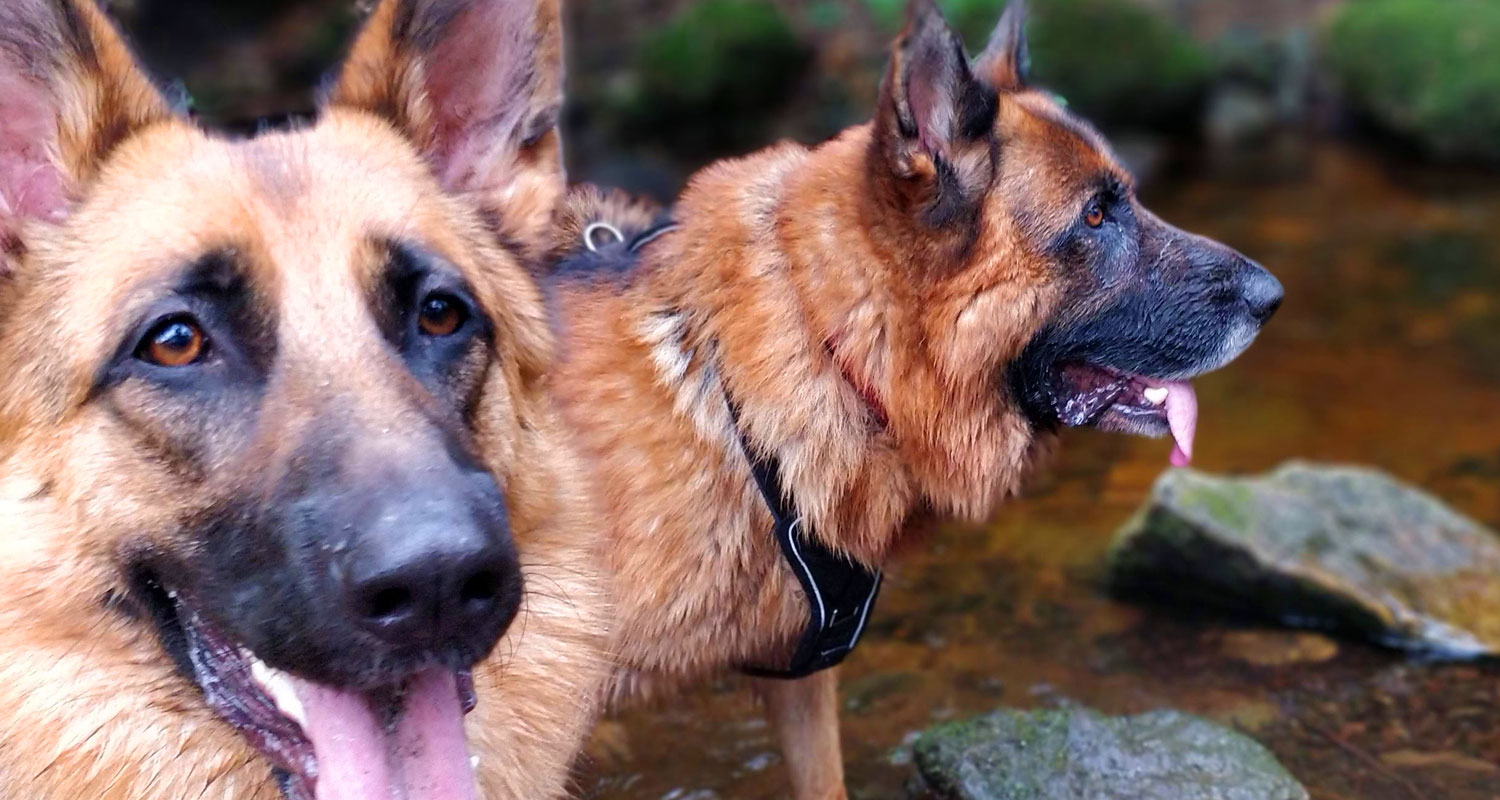 You know who isn’t worried or preoccupied or stressed or fretting about a virulent pandemic? Dogs.

Dogs don’t know, therefore life for them is perfectly normal right now. Except there are probably more walks than ever because it’s the only reason why some people can leave the house. Dogs are all ‘Hey everyone’s home!’, and don’t know who to lick next.

I was thinking about the dogs of my life. I mentioned Winston the other week, a big lab/retriever who lived at the hotel where I grew up. I guess he just kind of came with the package, because knowing my father and his perfectionist working ways, he wouldn’t have considered an often smelly, sometimes very wet dog as ideal for the front of a hotel.

When we moved back to Ireland, my uncle’s dog had pups, so we got one. He was a West Highland White, and he was called Scamp. I remember the first night he came he was tiny and scared and shaking, but he settled in soon enough. Unfortunately, when he was very young he got really sick. The vet said he had meningitis and distemper and about three other dog diseases that no dog should get.

I remember being taken to the vet to see him, and all he could do was spin around in circles. It wasn’t nice, and it was suggested to me that the best thing to do would be to put him to sleep. Even at 10/11, or whatever I was, I knew that was the right thing, but I pleaded for just one more day to see if he would recover. It was a long shot, but it flew into the top corner like an Aaron Ramsey volley against Galatasaray.

Somehow he stopped doing the running in small circles thing and was allowed back home. He was never quite right though. For some reason, the illness made his bark something to behold. Westies aren’t the yappiest of little dogs, but afterwards Scamp sounded like one of the hounds of hell. He had a deep, gutteral bark that brought to mind a gigantic beast of a dog, not a little thing who forgot that there was a bar under the kitchen table and every time he ran into the house he’d crack his head off it.

He was also fond of escaping. If you left the side-gate open, he was gone. Sometimes for as long as three weeks, but we always found him again. This was before the era of micro-chipping and so on, which makes it all the more remarkable. Particularly when you consider he had no road sense, and once we found discovered he’d had made a new life for himself in Tallaght, a good few miles away.

The other thing he did was howl at sirens. Police car, ambulance, fire engine, he would howl like a goddam werewolf until it was out of ear-shot. He died one year around Christmas time, quickly as dogs do, but he was quite old. His dog time had come.

After that, long-time readers will remember the Arseblog basset hound. A feature of the site down the years. Opus was a funny dog. A cranky, hilarious, stubborn, obstinate and any other similar word you can think of dog. Bassets are full of character, and people think because they look a bit silly they’re obviously very friendly. This is not the case, as the young man who disturbed a restting Opus discovered on the Ramblas in Vilanova i la Geltru one summer’s day. 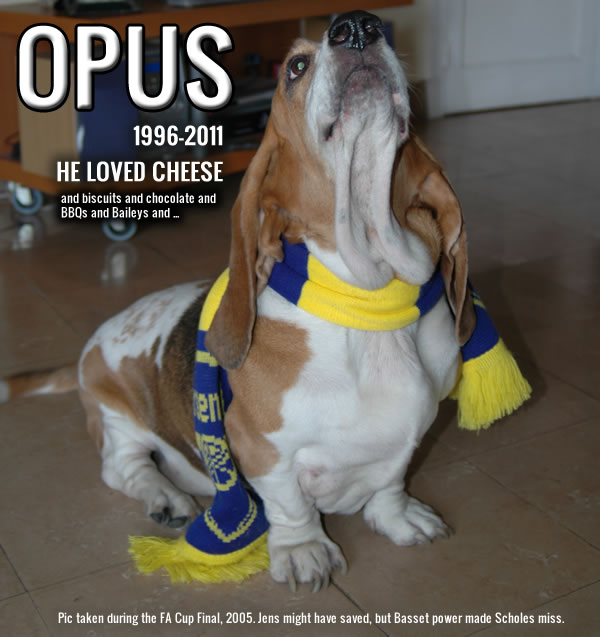 He was watching the world go by, probably day-dreaming of chasing a cat made of cheese, and the young chap put his hand down to pat his head. Bad choice Jordi. Thankfully he had slightly quicker reflexes than Opus and to this day has all of his fingers. Never judge a dog by how it looks!

Bassets are food driven. To this day, some fifteen years later, the Blogette has not forgiven him for stealing her Terry’s Chocolate Orange. I understand it to an extent. If she had left it on the table, within easy reach of him, she would have accepted her mistake. That Opus somehow managed to get up on the sofa, take the chocolate orange from behind some books in a bookcase, then unwrap it perfectly – box and plastic wrapping – before wolfing it down still rankles with her.

He nearly died once with a torsion, his stomach twisted and we thought that was gonna be that, but he still had so much left to do, so many cheeses to eat, he lasted another eight years before dying at 15 in October 2011.

In June 2012 we got Archer. I remember going to see the breeder at his place down in Wicklow. He had his kennels out the back, and Archer’s dad was a big, beautiful dog called Audi. At that point my understanding of GSDs was limited. Like many people I saw them as police dogs, guard dogs, working dogs, so when we walked in and Audi jumped up, put two paws on my shoulders, and basically stood face to face with me, I was a bit concerned.

Until he gave me a big lick on the face, and hahahaha how I laughed with laughter and relief, and everything un-clenched. Archer vomited about six times in the car on the way back home. It took him less than 48 hours to be house-trained. The pic below is him on his first day home. 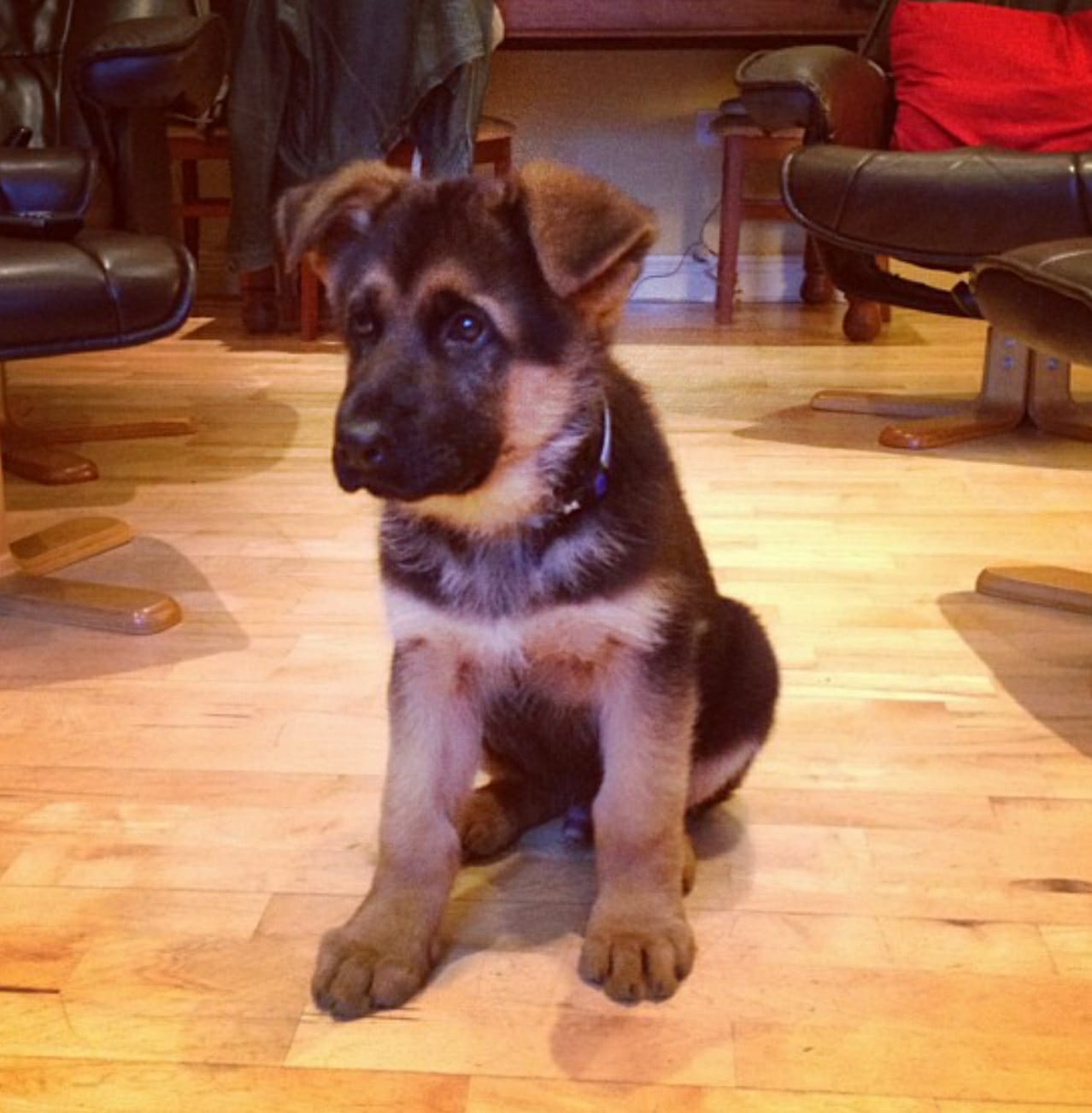 Shepherds are fantastic guard dogs, it’s natural to them. Doorbell rings, Archer goes WOOF WOOF WOOF WOOF. To this day. However, they are the sweetest, goofiest dogs you could ever meet. Serious when they need to be, but all they want to do is work and play and be with you.

A couple of years ago we got Lana (what else could you call a female when you have an Archer), and at first Archer was very much ‘WTF?! WHAT IS THIS THING?’, but now they are the best of friends, and she’s keeping him young and us fit. The pic below is her first day, note the slight difference in size! 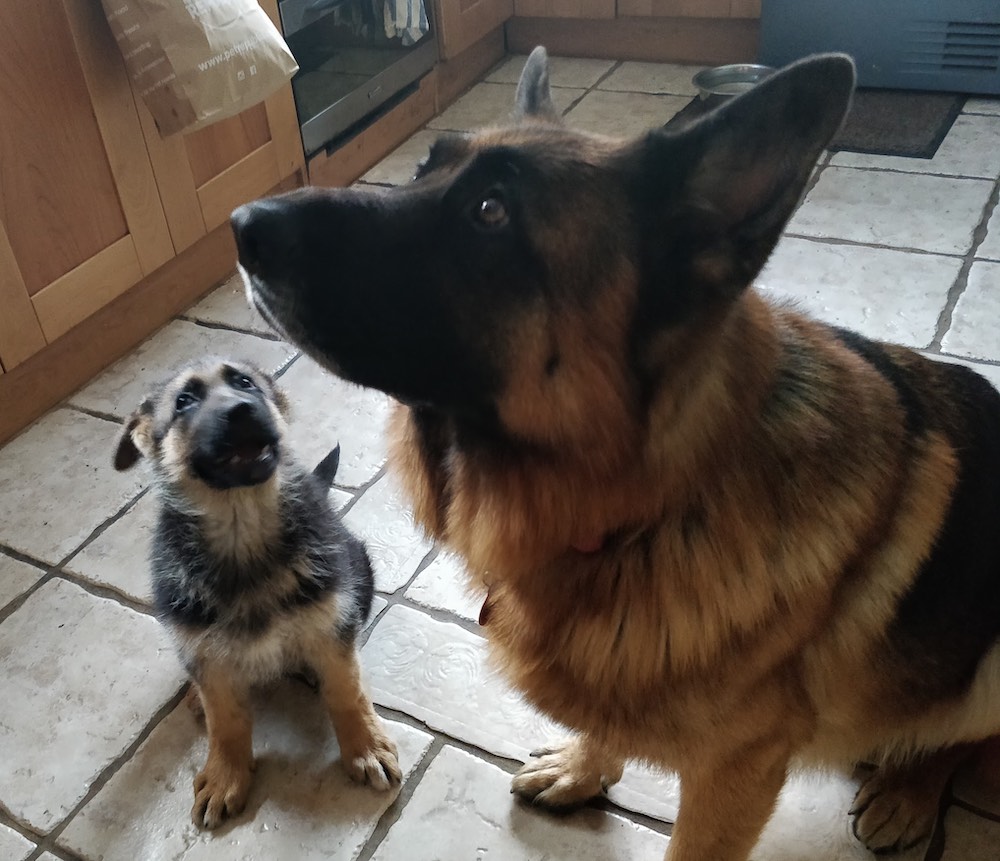 Ordinarily, they both go up the mountains every day with Mrs Blogs, but that’s all done for for the time-being. She learned a lot from Archer, but is very much her own personality. Same breed but very different. Archer is super-chilled out, some of that is down to his age, and in the house she is so affectionate and just wants to give you hugs and licks. She is a house-angel, street devil though. She hates cats. Oh god she hates them so much.

There are many in our area, most pernicious of which is the black cat up the road called Mr Pops who taunts her with his feline ways. Sometimes I think her desire to get a cat is so great that she invents them in her own mind and stands barking at an empty driveway at a random house. She’s maturing now though, and has stopped waking me at 4 and 5am just because she wants some company.

Both the dogs, you’ll be pleased to hear, hate magpies with all their hearts. There is a long-running battle in our back garden between dog and bird. The magpies chatter and fly down to steal bits off the various bones lying around, the dogs bark and wish they had wings so they could chomp them like they need to be chomped. This war will never end. It’s nature at its most absurd.

I can’t imagine a household without a dog. When you’ve had a bad day or things are getting on top of you, you can always just go for a walk, or sit down and have a hug with your mate. Or both mates because when you hug Archer, Lana is all ‘HEY, WHAT ABOUT MEEEEEE?!’.

They’re getting a lot of hugs at the moment. They love it, and I love them. Give your dog a rub for me, and I’ll be back tomorrow with more.