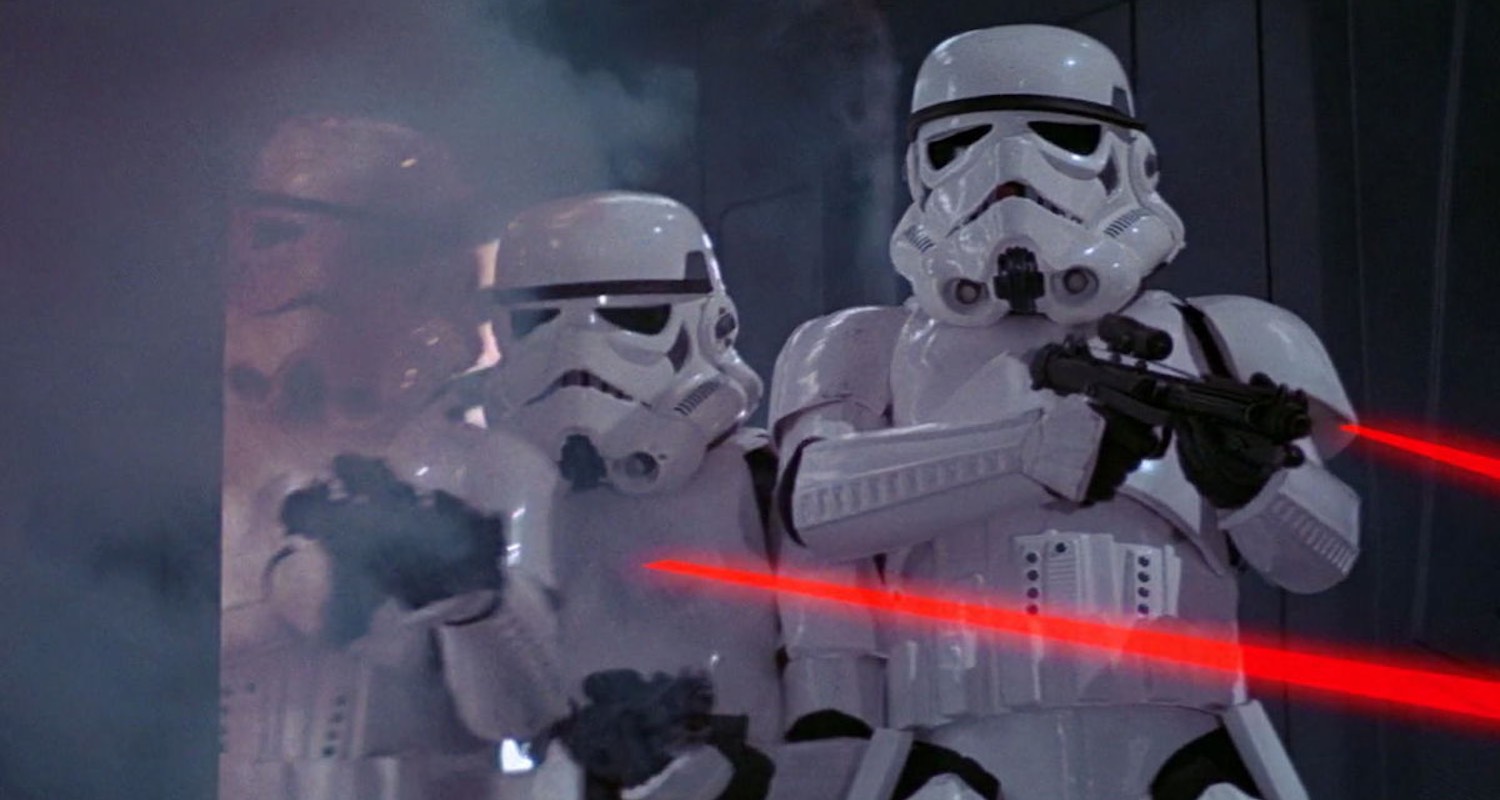 Some quick Sunday waffle for you.

And while I realise this is hardly a new observation: Stormtroopers are absolutely crap, aren’t they? I mean, this is the most evil organisation in the Galaxy, led by a hugely powerful but quite crinkly Emperor, and this is the best they can come up with?! People think their nefarious plans are foiled by heroic Jedi Knights and their various mates, but did they ever stop and think that maybe it was because a fundamental part of their organisation was consistently sub-par?

If I were Darth Arseblog or whatever I’d be called if I was in charge, I’d leave the strangulation-from-distance of my generals to one side for a while, and take a walk down to the HR department. They’re the ones that need a good throttling if you ask me. They must have almost no standards when it comes to hiring.

HR: “So, why do you want to become a Stormtrooper.”

Derek from Hoth: “Dunno, like the outfit, I guess.”

HR: “Do you like shooting lasers that make a cool sound?”

Derek from Hoth: “Spose so.”

Derek from Hoth: “Erm … that they ARE the droids?”

Look, I guess there is an inherent difficulty in recruiting the brightest minds for a job like this. Anyone with a modicum of intelligence would turn the job down and do something else, so I get it, you’re not dealing with Space Einsteins here. You have to run around in formation making it easy for people to cut you down with their weapons, and the armour is absolutely useless. I mean, you’ve got this entire suit that should protect you but one blast and you’re down. There’s literally no protection from anything at all. I suspect that someone closely related to one of the top men got his brother’s company the equipment manufacturing contract despite the fact there were better and more competitive tenders for it.

Also, who is in charge of training? That guy or gal has a lot to answer for too. As far as I can see there has been no improvement in the performance of Stormtroopers whatsoever between 1977, when the first movie was released, and 2019 which is when the last one came out. Ok, you don’t expect dude with magic mind-powers and lightsabers and gigantic Wookies at first, but once you know they’re who you’re going to come up against, you adapt. You do the drills, you prepare properly for the challenges you’re going to face on a day to day basis as you Stormtroop, and I think it’s pretty clear these people have not done that at all.

I can only guess that Stormtroopers are also manning the TIE fighters that chase the Millennium Falcon, because they’re useless too. I can tell you who the head of spaceship training is. It’s Kaba Diawara, because these eejits can’t shoot. The odds are so stacked in their favour, often 20 or 30 to 1, and occasionally they might blow an aerial off as our heroes put 50p in the meter to make the lightspeed wotsit work, or take out the one the one X-Wing piloted by the bloke who looks like an extra from The Bill, but when it comes right down to it, they’re as inept as their ground-based colleagues.

So, in conclusion, the Empire lost because:

3 – A complete lack of on the job up-skilling leaving the organisation critically compromised as they looked to destroy the rebellion and the various planets they wanted to blow up for no good reason in the first place.

If your takeaway from Star Wars is that heroism, bravery and standing up the might institutional evil will always win the day, fine. The reality is that their downfall was of their own making, and easily implemented fixes were not made. Perhaps if the Emporer had just taken a bit of time to walk around and see what was going on instead of sitting around in a dark throne room, or all hooked up to some kind of battery, he might have seen the problems first hand.

And now it’s too late for him and the Empire. There are lessons we can all learn from that.