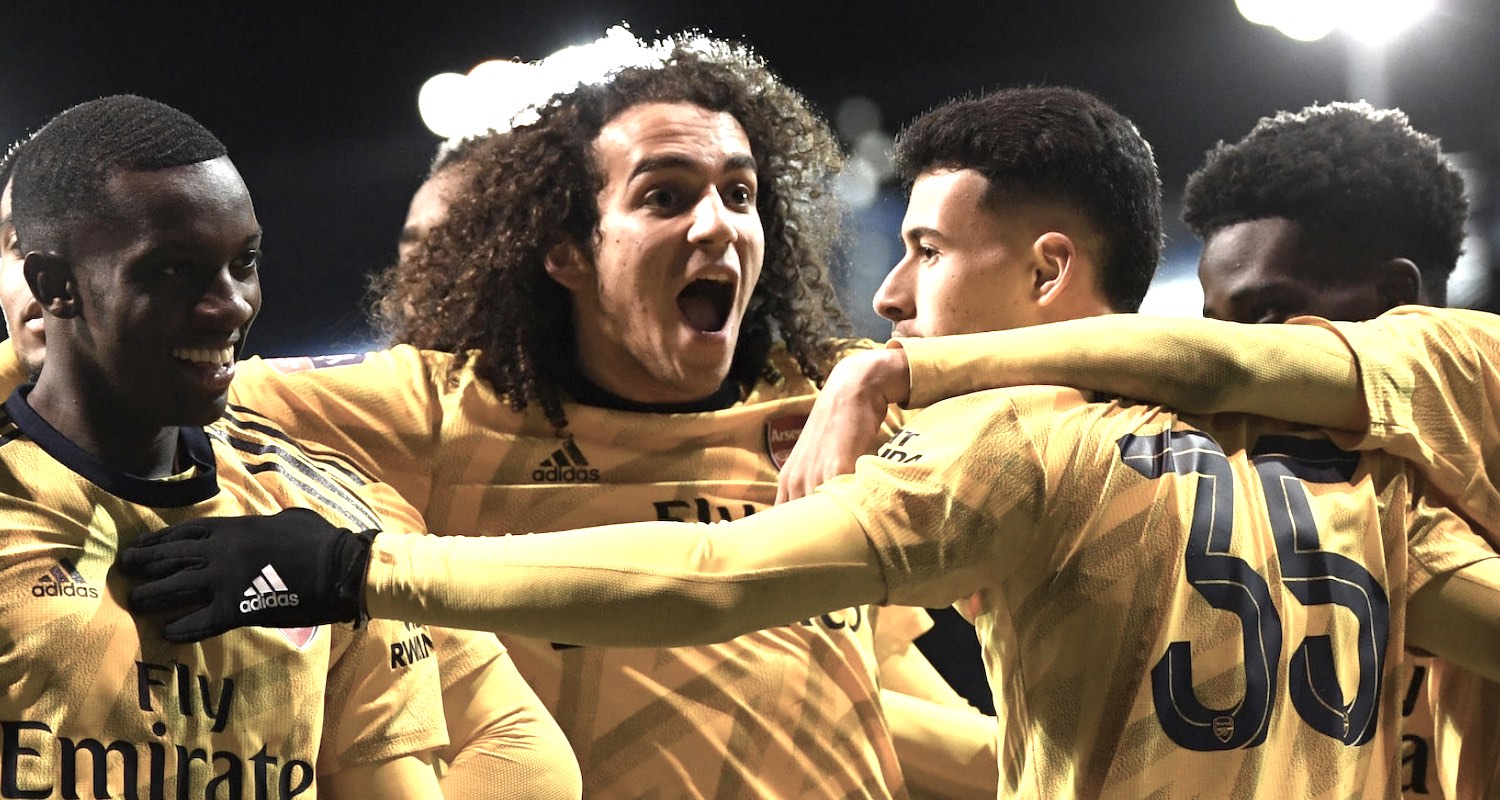 Goals either side of half-time from Sokratis and Eddie Nketiah were enough for Arsenal to go through to the quarter-finals of the FA Cup at Fratton Park last night.

As expected, Mikel Arteta made a host of changes from the team which lost against Olympiacos last week, the most significant of which was a debut for Pablo Mari who signed on loan from Flamengo in January. With Sokratis at right back, and a youthful ‘front four’ of Joe Willock, Gabriel Martinelli, Reiss Nelson and Eddie Nketiah, it didn’t quite click for the young Gunners early on.

At home and well up for the cup, Portsmouth worked hard and had some moments of danger as we got to grips with the pace of the game. We weren’t helped by the loss of Lucas Torreira after just 12 minutes. He came off badly after a heavy tackle by centre-half James Bolton and had to leave the pitch on a stretcher – and later boarded the Arsenal bus on crutches and in a protective boot.

I’ve watched this again and again this morning, and while the consequences of the tackle are obviously unfortunate for Torreira, I think a large part of it is just bad luck. It’s the kind of challenge that had one of our players made we’d be applauding the defensive commitment, and while there’s definitely a kind of scissors action, for me it’s more about the player’s momentum than any intent to cause harm. The debate over excessive force is one which could go on all day, I’d be more inclined to be critical of the fans who celebrated the injury than the defender who made the challenge. Hopefully Torreira isn’t sidelined too long, he seemed to indicate afterwards he was ‘fine’, but he’s due some scans so fingers crossed.

Frustration with the tackle might have been exacerbated by the fact Mike Dean appeared to let a Portsmouth player get away with an elbow on Nketiah with just a talking to rather than a card, as once again football’s most attention-seeking official looked to make the occasion about him. I’ve said this before and it’s worth repeating: the idea that he should be celebrated and feted as some kind of avuncular eccentric, with his ‘look at me’ flourishes, is absolute bollocks of the highest order. Forget this ‘Oh look at Mike Dean being Mike Dean!’ meme-culture nonsense. Let’s start talking properly about refereeing standards and Mike Riley’s personal fiefdom at PGMOL which remains accountable to absolutely nobody – even when they’re causing real harm to the game, as evidenced by the laughable implementation of VAR this season.

Apart from Guendouzi being booked for sarcastically placing the ball on the ground when Dean prevented us taking a quick free kick. I hope Alanis Morissette was watching because she would actually have something ironic to use in her song if a player is being penalised for on-pitch histrionics by a man who would be kicked out of his local amateur drama group for being too hammy.

The first half was a struggle but the goal just before the break was really rather nice. Portsmouth didn’t close down Reiss Nelson quickly enough after a corner had been cleared and the ball came back out to him. His low cross was met on the volley by Sokratis, a finish worthy of any striker, and it was 1-0 at half-time.

“Are you not entertained?” pic.twitter.com/ofnmszSrrZ

It was Nelson again who was instrumental in the second goal, showing the kind of pace we haven’t seen too often from him in his previous appearances, and while Nketiah got a bit of luck along the way, as a forward you have to be in the right position and he made it count for 2-0. It’s three goals in his last five appearances now, and while it’s early days it does hint at a player who can score with some frequency. Arteta’s decision to keep him rather than loan him out again looks a sound one so far.

As for Nelson, it was his first appearance since January 11th, so to make such a tangible contribution on his return is really positive. He’s a player Arteta likes, and I suspect that it won’t do us any harm to have someone else as an option for that right hand side. Both in terms of depth and the competitive nature of the squad.

The second half was much, much better from us. We basically controlled the game, I thought Guendouzi and Ceballos were excellent in midfield, while at the back the new boy had a solid debut. He wasn’t massively tested defensively but did what he needed to back there with five clearances and three blocked shots. However, it was his passing that stood out. He’s not afraid to pick a more ambitious pass if he feels it’s on, and the fact he completed 13 of 17 long passes last night is probably some hint as to why we’ve brought him in. I also liked his willingness to step forward with the ball before looking for a teammate, so while the sample size is very, very small, it’s a promising start in an Arsenal shirt for him.

Afterwards, Mikel Arteta was pleased with his side as they bounced back from disappointment last week:

We started the game with six players of 20 or under, so it was a real chance for the young players to experience the intensity of a cup tie against lower league opposition, something which is testing enough at the best of times. It took us a while to get going, but in the end you could see the gap in quality, and Arsenal were deserved winners on the night. The draw for the quarter-finals takes place later this week, something to keep an eye on, and we now start to prepare for West Ham on Saturday.

All in all, a decent night’s work.

James and I will be recording an Arsecast Extra later this morning. As ever if you have questions or topics for discussion, send to @gunnerblog and @arseblog on Twitter with the hashtag #arsecastextra – or if you’re on Arseblog Member on Patreon, leave your question in the #arsecast-extra-questions channel on our Discord server.

We’ll have that for you before lunchtime, so make sure you’re subscribed in your favourite podcasting app to get it as soon as it lands.