Music, football, escaped rabbits and the start of a radio obsession

As a kid I was obsessed with music and the radio. I grew up in a hotel. My dad was the manager of Cave Castle Hotel, in a small village called South Cave, around 10 miles from Hull. It had three bars, function rooms, a restaurant, and – like most hotels – rooms. Obviously.

Behind the reception desk there was a massive metal cabinet, something that looked like a control desk from some kind of 1960s movie, a whiff of Dr Strangelove off it. It had huge clunking knobs on it. It was an intimidating piece of equipment. It was also a radio that somehow served the radios in the hotel’s bedrooms. I could be misremembering this but I’m sure it did because I got in trouble once for listening to the official Top 40 chart rundown on BBC Radio 1 and some guests complained about Adam and the Ants or something.

The function room, known as the ballroom, was always busy with weddings and so on, usually on a Saturday. Sometimes I could go down on a Sunday morning and the DJ would have left his equipment there. His record decks, his 45s / 7-inch singles, and the microphone. I was fascinated by it. I learned that microphones are loud by having a great old time with it one morning until my dad came into the room wondering what the hell the awful noise was. I got in a bit of trouble for that too, but not much.

I don’t remember who the DJ was, but he was happy to show me how stuff worked, and he would make me tapes with the latest chart toppers which I would listen to on an Alba cassette player that looked something like the one below – except a bit less fancy, if that’s possible. 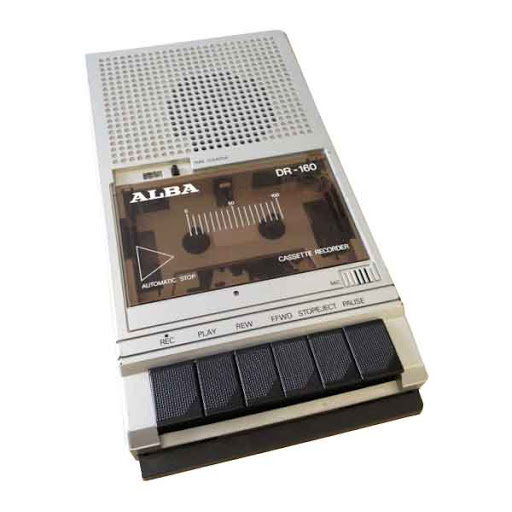 That’s what I did as a kid. I listened to music, read as much about football as I could in the papers and annuals and the Observer’s Book of Association Football (Arsenal record win 12-0 over Loughbrough!), and played football with my little brother, who you know as the Mugsmasher. We’d play on the front lawn of the hotel, a pair of little full-kit wankers – me Arsenal and him Liverpool. He’d always play towards the big tree at the bottom because he was afraid the tree would fall on him when his back was turned.

Back then, the three year age gap was substantial. If I was 7 or 8 he was only 4 or 5, so to make things fair, I’d give him a head start. We’d play up to 50, and he’d have a 49-0 lead to kick off with. I always won. We’d play cricket in the summer too. I remember him bowling at me one time and I leathered the very hard cricket ball as hard as I could and – on a rising arc, like an Aaron Ramsey goal against Galatasaray heading for the top corner – it whizzed just over his head. I mean JUST, it probably brushed the top of his head. At that exact moment, my dad had come out to see what we were up to, and I guess he got a fright at the sight of a rock hard cricket ball heading straight for his youngest son’s forehead and I got in a bit of trouble for that too.

The hotel had a dog called Winston. A big old black lab, he was there when we moved in. He’d sit in the reception and he smelled. That’s because the thing he liked to do most, apart from sitting around the reception and at the front doors, was to go swim in the lake down the bottom of the hill. If you have a dog, I’m sure you know the smell of wet dog. Winston died after he got hit by a car that was parking at the hotel.

Around the lake and the hotel were woods, as kids we found them a bit scary. Not too scary that you wouldn’t go in them and explore. One time I was convinced I found a Roman artifact. A heavy metal thing that looked like the top of a soldier’s staff. On reflection, it would have most likely been the top of an old gate post and it wouldn’t have made much sense for a centurion to lug around a thing that weighed him down so much.

We also had rabbits. Two little white fellas. I don’t remember what they were called. I just know that one day I went down to feed them and they were gone.

‘What happened to the rabbits?’, I asked my mam.

‘Yes, they escaped, and they’ve gone to live with a band of carefree rabbits in the woods behind the house’.

Genuinely, I was in my 30s when I realised what had actually happened. To be fair, I didn’t spend a great deal of time worrying about them because why would I? They were with their brotherhood of bunnies, fighting the good fight. Fighting like I saw the rabbits fight in Watership Down, the animated version of the book which came out in 1978. Those rabbits were tough. I mean, when you look back on it now it’s a terrifying orgy of cartoon violence and death, aimed at little kids. It was like Disney on PCP. We went to see it in the cinema, and I remember the Mugsmasher basically sleeping his way through it as Bigwig tore out the throats of all and sundry. I think that might have been a double-bill with Smokey and the Bandit.

I’ve strayed away from music, apologies for the ramble, but I’ll leave it there for now. Tomorrow, I’ll tell you how I got my first job on the radio at the age of 15.

Podcast lovers, don’t worry, James and I will be recording an Arsecast Extra this morning. As ever if you have questions or topics for discussion, send to @gunnerblog and @arseblog on Twitter with the hashtag #arsecastextra – or if you’re on Arseblog Member on Patreon, leave your question in the #arsecast-extra-questions channel on our Discord server.