Blogging through a pandemic

Amazing stuff has happened in our little community, this online world that brought people together and stretches now into ‘real life’. Whatever that it is at the moment. We’ve seen people come together, we’ve welcomed new tiny arrivals, and said goodbye to some dear friends.

There have also been happenings in the wider world which have had an impact, bled through from there ahead of football onto here, and that’s part and parcel of being human, I guess. Football is our escape from the day to day, the things we have to truly care about, but sometimes you get up in the morning and you sit down to write and football feels so unimportant you almost question why you spend so much time on it. Then you remember why it’s such a brilliant thing that we probably take too seriously, and off you go again.

I can tell you with some assurance though that I never imagined for one moment we’d have to contend with a global pandemic which is putting the lives of so many people at risk. Stuff like that was for movies. If I remember correctly it was all Gwyneth Paltrow’s fault. I’m sure she has some very novel ideas about to combat Coronovirus but I’m not yet ready to put a jade egg where she suggests.

Nevertheless, the show must go on, as the saying goes, but what exactly is the show now? Before it was easy. It was the game coming up, the game just gone, the player who was great, the player who you want to feed arse first into a cannon and fire over the top of a fiery mountain, the goals we scored, the ones we let in, the transfers we might make, the money, the business, the youngsters, the Arsenal Women, those boardroom scoundrels, and, of course – with the kind of reliability and frequency that we’ve come to expect down the years – there was the laughing at Sp*rs.

Is the Coronavirus an invention of Jose Mourinho’s secret underground lab? Would it surprise anyone if he turned out to be a super-villain who has inflicted a virus upon the world to take the heat off his current troubles at White Hart Lane? If prefer not to speak. If I speak, I am in big trouble.

But look, we’ll find things to talk about and to write about. Arsenal Football Club has a long and varied history, much of which has been documented, but is worth reliving. The focus on the present means that it’s often difficult to spend time on historical aspects of the club because you’re interrupted with the next game. So, we can go through seasons from the past, for good and bad. Old games, ex-players, highs and lows, there’s a lot to work with there.

There’s football in general, there’s football video games – and having already wowed the world with our incredible skills on FIFA 18, James and I will do some live streaming of Arsenal v Arsenal during which I will unquestionably have more men sent off than I score goals. That’s just how I roll. And by roll, I mean make outrageous slide tackles.

No doubt stuff will happen over the course of this shutdown that will demand attention and comment; there are non-Arsenal matters we can discuss; I might do some other kinds of writing too, I don’t quite know what yet, but as much as it’s part of your routine to wake up and read Arseblog, it’s my routine to get up and write it. It would feel very strange not to do it, so I’ll just do it.

We’re living in strange times, as the below headline from Football España clearly demonstrates: 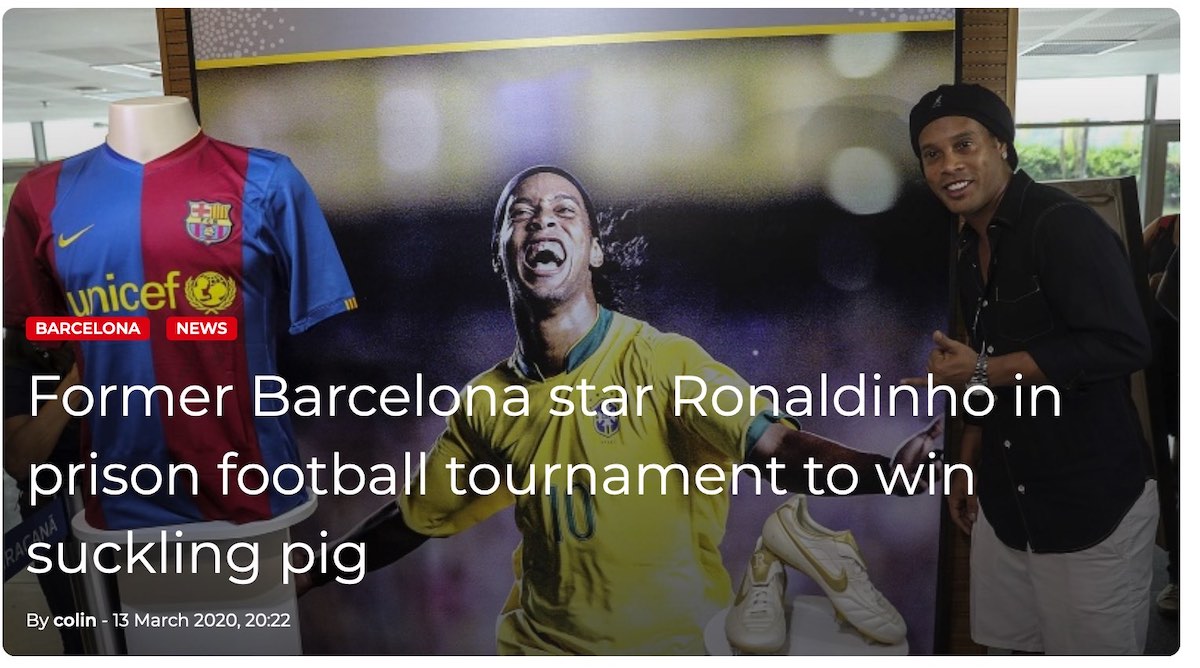 Reportedly, he scored 5 and assisted 6 in an 11-2 win and his team enjoyed the suckling pig. I don’t know what the other team got. Leftovers? I don’t suppose we’re too far away from Sky Sports and BT making prisoners play football so they have something to show on their now empty channels, but at least Ronaldinho and his mates are full of pork. It’s a small comfort at the moment, but you take what you can get.

Right, I’m out of here for this morning. I don’t expect there to be any Arsenal news of any kind but if there is we’ll cover it for you.