Home Arseblog, the arsenal blog What to do with Lacazette?

I’ve seen lots of discussion over the last few days about what we should do with Alexandre Lacazette at the moment. Whether you’re a fan of his or not, it’s fair to say that last season’s Player of the Season is really struggling right now. He hasn’t scored since mid-December, he hasn’t scored away in the Premier League for a year, he looks like a player bereft of form and confidence, and yet there are people who insist that he is absolutely fundamental and necessary for the team.

What is clear is that Mikel Arteta has, in the short period he’s been in charge, been happy to use him, starting him in every Premier League game he’s been manager for. In that time Lacazette has provided no goals, and one assist – for Aubameyang at Crystal Palace, a smart pass which his mate finished very well. And when it comes right down to it, the lack of goals is the key issue. Arsenal aren’t winning games, we aren’t scoring enough goals, and the fact that our centre-forward is misfiring has to be a contributory factor to that.

I realise there have been other issues. Twice in the last seven games we’ve been reduced to 10 men, which makes it more difficult and requires a different kind of gameplan, one which can mean a striker is the first line of defence rather than the first line of attack. In those particular fixtures, you can understand a forward drawing a blank, but it’s not as if he’s had no service or been without opportunities.

I looked at his xG for each of the Premier League games he’s played under Arteta.

In this game he had four shots, none of them on target, with an xG of 1.07 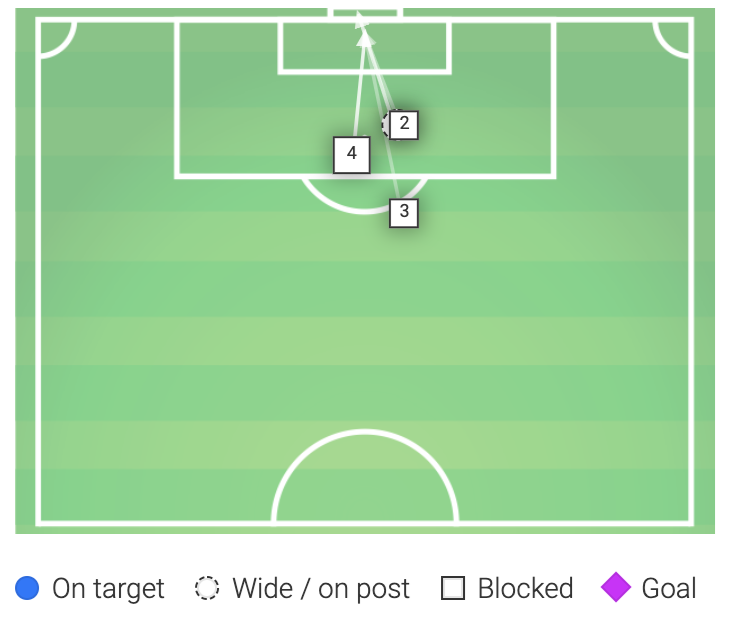 Three shots, one on target, xG .34. His shot on target was a flicked header from a Pepe corner which David de Gea saved and subsequently Sokratis hammered home from close range to make it 2-0. So you could say he had a goal involvement here.

This was the game in which he provided the assist for Aubameyang. He also had one shot, which was on target, saved by the keeper from close range after Pepe’s shot hit the post. The xG for that shot was .8

One shot, none on target, xG 0

2 shots, none on target, xG .51. He missed that relatively easy early header, and in the second half he had the kind of opportunity in the box that we’ve seen him take before when he turns, swivels and shoots, but at the moment each part of that takes much longer than it should, making it easier for Burnley to defend.

So, it’s definitely not happening for him in front of goal. There are games in which he hasn’t had service but others in which he’s spurned good chances to score. One of the more curious suggestions I’ve seen is to move Lacazette into the ‘number 10’ position, replacing Mesut Ozil and for him to become our Firmino. I have to say this has left me a bit puzzled, because I don’t really understand what anyone sees in Lacazette’s game that makes him suitable for that role.

People talk about his hold up play, but I don’t think it’s quite good enough at centre-forward so risking him taking a heavy touch deeper in our build-up doesn’t seem that smart. His passing is fine, but nothing special, and I don’t see untapped resources of creativity which Arteta can unlock and turn him into some kind of Firmino/de Bruyne hybrid. I use the latter only because he’s the most prolific creator in the Premier League this season, with 14 assists. I realise he plays in a different position too, but if you’re advocating moving Lacazette backwards to become the link man and chief creator these are the kind of comparisons that will get made.

I wonder if part of this suggestion is more about recognising that Mesut Ozil simply isn’t doing it, than Lacazette’s own suitability for the role. The German looks a spent force right now. He’s working hard but producing little, so in order to keep someone who is nominally a goal threat in the team we could replace him with Lacazette. To me it’s a fanciful notion, and it obscures the key problem that the Frenchman’s poor form creates – Pierre-Emerick Aubameyang.

When it comes right down to it, we have one of the best strikers in the Premier League playing out of position week in, week out. In order to get him closer to the box we have a heavy left-sided bias in the way we attack. Granit Xhaka provides cover for Bukayo Saka whose overlapping means Aubameyang can squeeze centrally and hopefully get chances. What seems obvious to me though is that this comes at the expense of our right hand side, and as good as the captain is from there – and he has scored a lot of goals for us from that starting position – it’s not where he’s at his absolute best, which is as a central striker. That’s where he should play.

So the question about where Lacazette should play becomes a very simple one at the moment: he doesn’t. I understand Arteta wanting to lean on experience in these opening weeks of his reign. Having players who have been around the block, who understand the game and how to play it at this level is something most managers would be thankful of. His team selections have illustrated his outlook in that regard. Like Lacazette, Ozil has started all seven league games. Like Lacazette, he hasn’t produced enough.

Seniority only goes so far. At some point form and end-product has to play a part in the manager’s team selection. Does this mean Lacazette will never play for us again? Of course not. There are a lot of games between now and May, but in this very short-term, when he’s struggling so badly, the solution isn’t to keep playing him, or to play him out of position, but to drop him, give someone else a chance to do the job he hasn’t been doing as well as we’d like him to, and let him work his way back into the team.