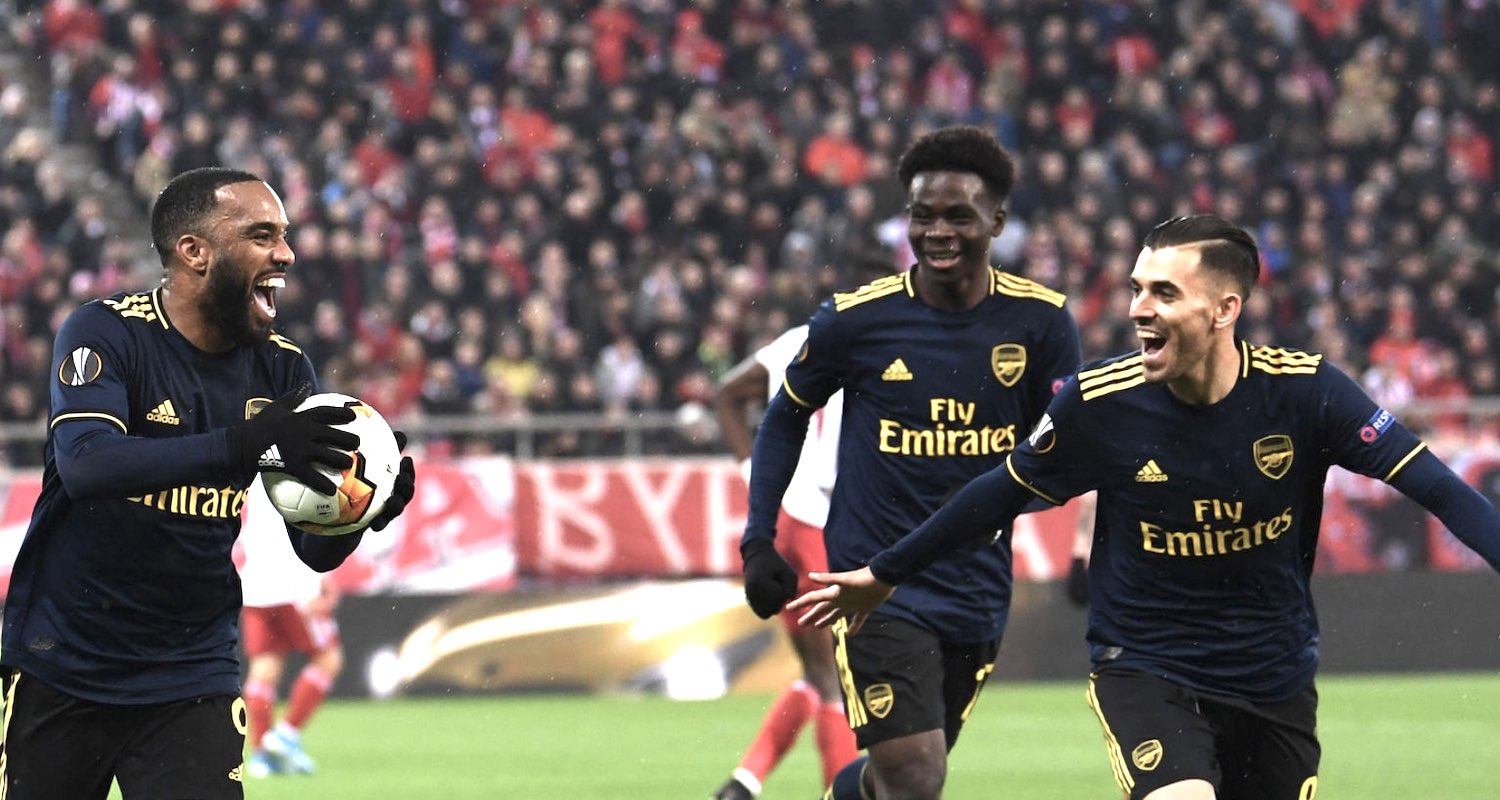 Perhaps it’s because we’ve had some Champions League history with Olympiacos, but last night felt like a ‘proper’ European game. Not that it isn’t already, but this wasn’t some kind of lower level opposition like we’ve had at this stage of the Europa League before.

It was also Mikel Arteta’s first European game, and he did make some changes from the team which beat Newcastle on Sunday. Sokratis came in for Hector Bellerin at right back, with Ainsley Maitland-Niles on the bench – and I think that’s some indication of how the new manager views him. Centre-halves at full back is a challenge, not to mention they generally hate playing there, so it’s almost certainly reflective of some caution on Arteta’s part about Maitland-Niles.

In came Matteo Guendouzi, Joe Willock, Alexandre Lacazette and Gabriel Martinelli, while Bernd Leno kept his place in goal. I think this is also telling, and a development I can definitely get behind. With all due respect to Emi Martinez, he’s our number 2 keeper for a reason, and with the Europa League hugely important for us, I think picking your first choice keeper makes a lot of sense. Leno spoke after about how he wants to play in every game, and Arteta’s decision to select him was justified early on with a very good save as we struggled to cope with their fast start.

They ought to have scored shortly after when Masouras headed over from very close range, and it’d be fair to say we got away with it a bit in the opening stages. Olympiacos were confident, they’d only lost once game at home all season prior to last night, and that was to Bayern Munich in the Champions League.

Slowly though, we grew into it, dampened down their intensity and began to assert some control. Having failed to get on the end of an Aubameyang cross, Lacazette was presented with a glorious chance to put us ahead when Martinelli returned a pass to him, but the striker’s recent woes were on display again when he fired the ball wide from close range.

Without the craft of Ozil, and with Xhaka and Guendouzi unable to provide the kind of incisiveness we saw from Dani Ceballos at the weekend, we looked a bit pedestrian going forward. Joe Willock tried to provide some momentum as a ball carrier, but Martinelli was barely in the game (just 16 touches and 8 passes all night), and the Aubameyang shaped elephant in the room was plain to see once more.

When he scores from wide positions, which he does with enough frequency for us to sweep this under the carpet, we can justify his selection out wide. When he doesn’t, it seems like a waste playing him out there – particularly on the right hand side. I know that Lacazette got us the goal that eventually won the game, but in general he had a poor game, and when that comes at the expense of playing your best centre-forward in his best position, it’s more difficult to make sense of.

I suppose in the end it worked out. Lacazette got his goal, but I can’t shake off the idea that it’s a waste using Aubameyang wide when he’s such a threat in more central positions. I guess it opens up other questions about the kind of structure you need to play with him there, or who exactly you need around him, but it remains an issue that I’m sure gives Arteta some pause for thought.

There was ebb and flow to the second period, again Leno showed why he’s the number 1 with a couple of smart saves, while Ceballos and then Pepe were introduced for Martinelli and Willock. The goal came late. In the 81st minute Mustafi launched a big diagonal to Aubameyang – now playing on the left. He took it down well, fed Saka, and his brilliant delivery between the defence and the keeper gave Lacazette a tap in. A big goal for the striker, but another reminder of what a talent we have in the 18 year old. That was his 9th assist of the season, and he’s becoming an increasingly important part of what we do as an attacking force, which is not something anyone would have predicted at the start of the season.

We could have scored more. Sokratis headed against the bar and Mustafi headed the rebound wide of an empty net. There was another chance for Lacazette which the keeper saved well, but he didn’t quite make the most of the opportunity either – maybe he could have played it outside him to Pepe, but you can understand a striker shooting from there.

Afterwards, Arteta sounded quite happy, but still aware that qualification is a long way from assured:

It is tough to come to a stadium like this, away in Europe, and get a win and there were a few lessons in the game for us, and some great things for our development as a team. It will be a different game at the Emirates. Obviously scoring away from home is very positive but the tie is completely open.

Overall, 1-0 is a decent result in the circumstances. I think we worked out fairly quickly that they’re not quite as tricky as we thought they might be, but to go away and win in Europe is always good. In fact, for Arsenal to win away at all this season is not to be sniffed at. There’s still plenty of work to do in the second leg, but we’re in a healthy position with an away goal under our belts, and now we can start to focus on Sunday’s visit of Everton.

Because of the late night game, and all the rest, there’s no Arsecast yet, but I’ll be recording a post-match review this morning with Andrew Allen, so we’ll have some audio fodder for you a bit later on. Follow @arseblog if you’re not already to get an update as soon as the podcast is ready.

More reaction and news throughout the day on Arseblog News, for now, have a good one.