It would reasonable to suggest that conceding a goal in the first minute was not part of Mikel Arteta’s plan for the Everton game. Having meticulously decided to stay in Greece to aid the preparation as we played our third game in seven days against a side who have two weeks off, the idea would have been to keep it tight early on as we warmed up our aching legs.

Instead, Dani Ceballos conceded a free kick, Everton lofted it in, and from there some dodgy defending allowed Calvert-Lewin to hook the ball home. I suppose shouts for a high foot are reasonable, but penalty box acrobatics tend to favour the attacking side. I recall a Laurent Koscielny goal against Southampton a couple of seasons ago which could have been disallowed for the same complaint, but I think we have to look at the way we defended the set-piece as the key problem, not refereeing.

One of the people responsible for that was Sead Kolasinac whose bizarre antics when the free kick was taken contributed to that goal. He found himself in more trouble after just 15 minutes. He went up for a high ball, got caught by Djibril Sidibe who was protecting himself from 16 stone of Bosnian muscle hurtling through the air, and landed awkwardly. At first it looked as if he’d just got a dig in the mouth, but using his shirt as a sling he left the field with what appears to be a bad shoulder injury. Having just come back from injury, that’s unfortunate for him.

The fact we have Bukayo Saka to replace him is fortunate for us though. Left on the bench because he’s got some aches and niggles of his own, he was brought on to great applause and anticipation, and he showed once again what a talent he is with the cross for the equaliser. Set free down the left by Xhaka, he whipped in a delicious ball which the onrushing Eddie Nketiah knocked home well for his first ever Premier League goal at home. The focus will be on Saka as he moves into double figures for assists, but I think Nketiah’s movement and anticipation deserves a mention too, he got between the two centre-halves perfectly.

Less than five minutes later we were ahead. The quality of Pierre-Emerick Aubameyang should never be in question, but I think you can ask if the service we give him is always commensurate with that. Yesterday, a simple but perfect pass from David Luiz put him in behind the Everton defence and on his way towards goal. Nketiah was outside him for a pass, but was there ever any doubt what he was going to do? The curling finish was one we’ve seen plenty of in the past, you all know who it looked like, but this was Aubameyang at his clinical best.

Everton were rocked a bit by the two quick goals, but just before half-time drew level with another goal from a set-piece. I’m not sure it was actually a corner, as the ball seemed to come off Sidibe last, but we had to deal with it better than we did. Mustafi was beaten to a header when the half-cleared ball came back in, I think Leno should have done more and Richarlison was there to poke the ball home. On a day when we showed plenty of positive characteristics, our defending from set-pieces won’t have pleased the manager at all.

Nevertheless, if conceding just before the break is seen as a terrible time to let in a goal, scoring one early in the second half certainly helps you get over that a bit, and that’s exactly what we did. Ozil fed Pepe down the right, he crossed to the middle, and Aubameyang was there to plant home a superb header to make it 3-2.

The cameras panned to the Everton bench after the goal, and if Carlo Ancelotti’s face does not become the worldwide standard for an ‘I can’t believe what I’ve just seen’ reaction, I will be hugely surprised. 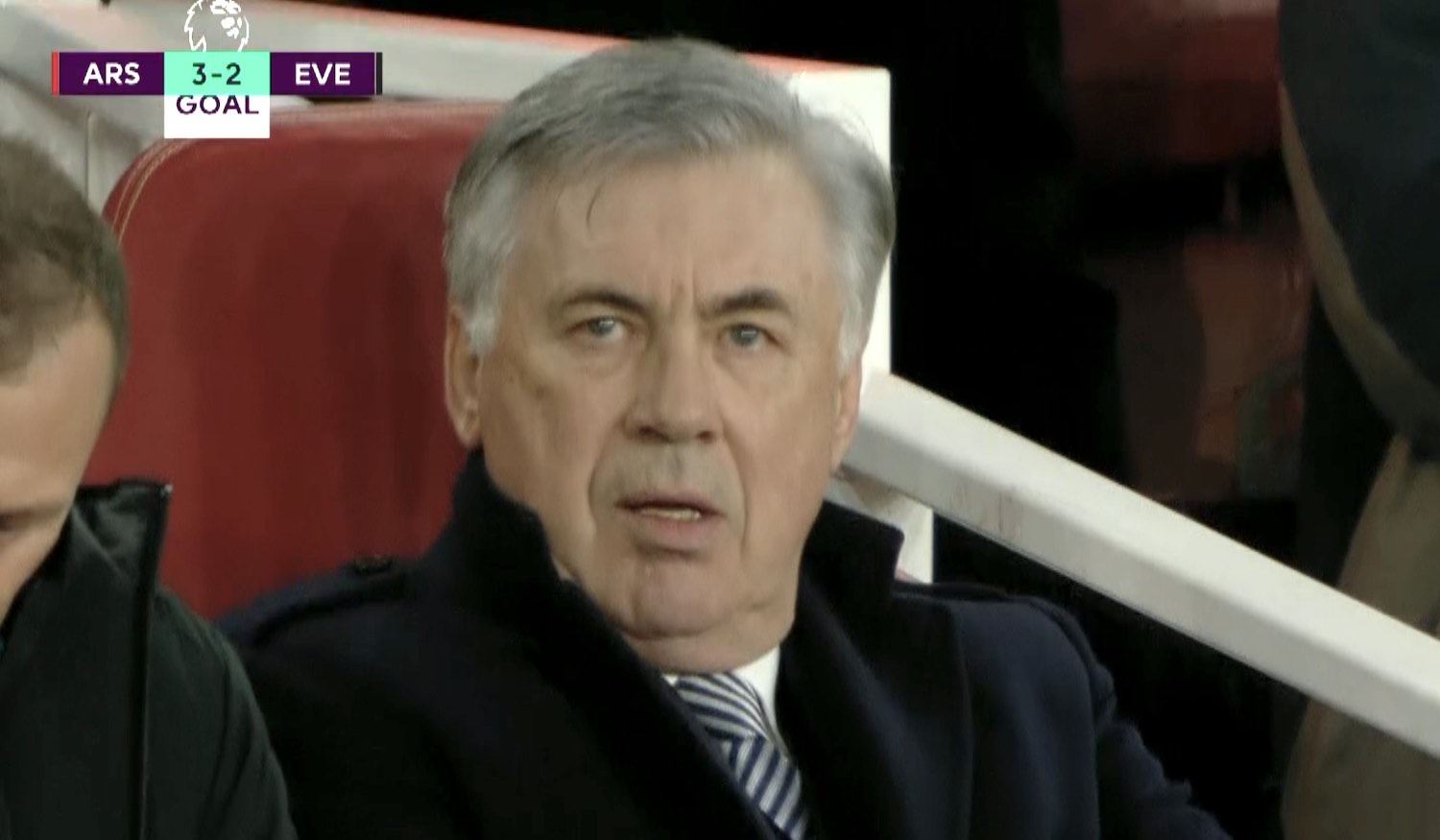 At that point we were well on top, and it felt like we needed to score again to really make the pressure count. The goal didn’t come, and then the momentum changed. There was danger from Everton which saw Luiz and Calvert-Lewin need some treatment, the played stopped for a while, the visitors made a couple of subs, and after that they were much more dangerous.

Arsenal’s fatigue played a part too as they pushed for an equaliser. Our passing and organisation got a bit ragged, and they had chances to score. Credit to Bernd Leno who should have done more at the end of the first half, but was absolutely immense in the second. Not just stopping shots – one save from Calvert-Lewin in particular was superb – but sweeping up when it looked as if Everton were going to get behind. We can all see a good save for what it is, but I think in the circumstances we sometimes underestimate their importance.

Arteta spoke afterwards about how the players were ‘absolutely knackered‘, and I wonder how heavy those legs would have felt in the final stages had we been trying to hang on for a point, or pushing up to try and take all three if Everton had equalised. It underlines the importance of what Leno did. There’s no doubt we rode our luck a bit, not least when Calvert-Lewin headed wide in injury time. If you watch the clip again, some Arsenal players aren’t even aware Everton had taken a quick corner, so we got away with that a bit – but sometimes that’s just what you need to win a game. Sometimes, it’s your reward for the effort you put in, and I think that was the case yesterday.

At the other end Nketiah had hit the bar, but in the closing stages Everton looked far more likely to score again than we did. Given the respective schedules, I don’t think that’s a surprise. We had to dig really deep against a side who were fresher and sharper and not suffering from a European game and travel just a couple of days earlier. Again, that’s not an excuse for anything, simply the reality of the situation the two teams found themselves in.

The fact that we responded well to going behind so early was something that Arteta was impressed with afterwards, saying:

This is part of the game, you know. This is the reaction I’m hoping for from my team. There’s disappointment and things we can’t control. But we kept going, we kept trying, we started to do the things we talked about and we generated the chances and the type of game that we wanted.

He keeps talking about us being a work in progress, and that’s basically indisputable. Clearly there are things we can improve on, but each game is a lesson for Arteta. He’ll learn more about his players, their character and capabilities, and I’m not sure this is a game we’d have won even a few weeks ago. There has been progress in terms of how we’ve been playing, and we’re now seeing it in the results too.

At the final whistle, Arteta pumped the air, embraced his staff, and had hugs with the players on the bench, starting with Mesut Ozil – but also including the likes of Lacazette and Reiss Nelson who didn’t even play. Dani Ceballos celebrated like crazy, Gabriel Martinelli emerged from behind the bench beaming, and the players who finished the game on the pitch high-fived as we got another three points under our belt and on the league table.

What Arteta wants to do at this club requires serious buy-in from the players, and you can see he’s got that. He’s building a squad that understands the need for solidarity and the need to work together to achieve results. To have fashioned this out of the shambolic wreckage he had to contend with when he took over just a couple of months ago really is a testament to his skills as a coach. There’s plenty still to do, but there’s no question were heading in exactly the right direction.

For more in-depth discussion of the game, Arteta’s comments on Aubameyang, and all the rest, James and I will be recording an Arsecast Extra later this morning. As ever if you have questions or topics for discussion, send to @gunnerblog and @arseblog on Twitter with the hashtag #arsecastextra – or if you’re on Arseblog Member on Patreon, leave your question in the #arsecast-extra-questions channel on our Discord server.