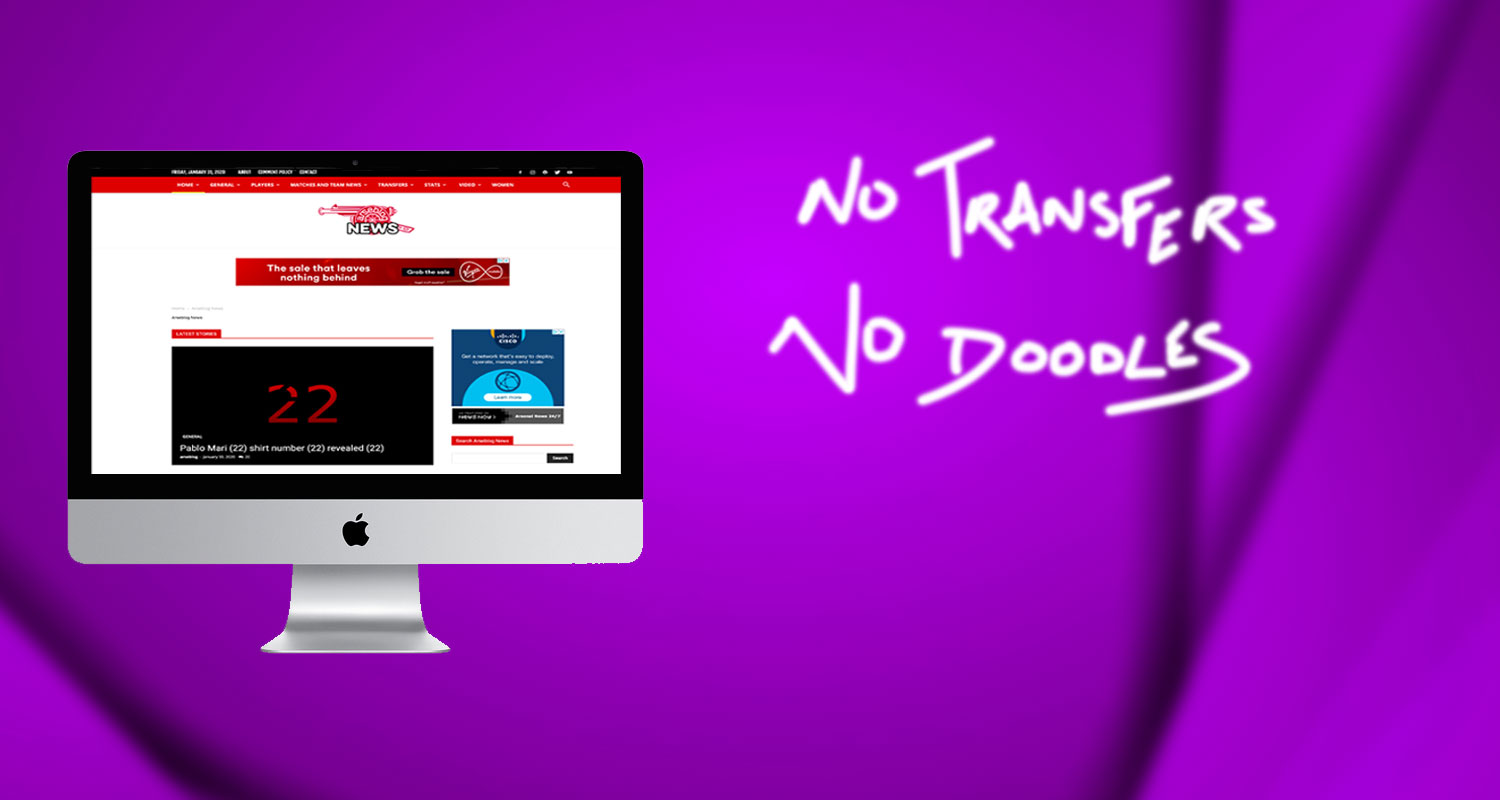 Morning all and welcome to Friday. It’s Transfer Deadline Day. Normally we do a live blog on Arseblog News, but today we’re not gonna. Maybe there will be a nice surprise for us in the transfer market, but it’s quite unlikely. Therefore, it’s difficult to make a commitment of that time and increasingly bizarre doodles.

Maybe I’ll post some doodles throughout the day anyway, but we can’t go from 7am to 11pm tonight waiting for Arsenal to announce the fairly underwhelming loan signing of Cedric Soares and the potential departures of a couple of our double-barrelled youths on loan. If we do send out Barnaby Stingwing-Deathclaw or Tyroil Smoochie-Wallace, we’ll do stories over on Arseblog News.

And of course is there is an arrival that we don’t expect – which I completely don’t expect … to be clear I’m not expecting anything unexpected … which is the very nature of a lack of expectation I guess … we’ll cover that too.

Another key reason for not doing a live blog is I don’t think there’s the same focus on transfers as there might have been had circumstances been different. Had we muddled on with Unai Emery, I suspect there’d be a much greater clamour for new faces than there is right now. The fact that Mikel Arteta has come in and made players individually and collectively better has dampened down the call for incoming business.

A few weeks ago you’d have nodded sadly, but cheerfully gone along with a plan to send 80% of this squad on a one way trip to the sun. Now, it’s different. It doesn’t mean we don’t still have problems, and that this group of players can’t be improved via the transfer market, but it feels to me like most people have accepted that the work that needs to be done there needs to be done properly and that January is a difficult time to do that.

Now, the question marks over who is going to do that at executive level – and how – remain, for me at least, but that’s another discussion for another day. We’ve used Raul Sanllehi’s contacts book to bring in a player on loan this month, and the expectation is that contacts book will bring in another (Soares) before the close of the transfer window this evening. Maybe that’s how you expediently deal with the difficult January market to fill the gaps in your squad, but hopefully the players that arrive summer will have been identified through a more strategic long-term process.

Meanwhile, despite his reported desire to leave Arsenal this month to ensure he gets enough playing time ahead of Euro 2020, it seems that Dani Ceballos is staying until the end of the season. His loan spell from Real Madrid really hasn’t gone as well as hoped after a bright start. He shone against Burnley, and almost immediately there were stories and questions about Arsenal making the deal permanent. To say that kind of talk was premature is a bit of an understatement.

Fast forward to the end of January and I don’t know that too many people would consider paying money for him now. In mitigation, like everyone else it seems almost unfair to judge the level of his performances during the Emery era. Everything and everyone felt so awful by the end it’s difficult to make a proper assessment. Arteta promised everyone a clean slate and he’s been true to his word as Granit Xhaka and Shkodran Mustafi can attest.

He also had a bad hamstring injury which saw him miss a couple of months, and the first couple of weeks of Arteta because he was back in Spain doing rehab in Madrid. I know the weather is warmer and that helps, but I found it a bit strange that a player wouldn’t want to be front and centre when a new manager takes over. Anyway, he’s sort of fit again, and Arteta will be happy enough to have him in the squad, I’m sure. However, there’s been no sugar-coating things when it comes to Ceballos.

More than once he’s referenced his need to get fully fit and to compete for a place in the squad, and on Monday night he still looked to like a player who has work to do in that regard. He’s obviously tidy on the ball, but he looked leggy and off the pace. Arteta strikes me as someone who won’t countenance any player who doesn’t put in the work on the training ground or, if you’re behind everyone else, doing extra to make sure you’re at the right level.

It’ll be interesting to see how much we see of the Real Madrid man between now and the end of the season. The selection of Joe Willock for the Bournemouth game was very much a case of a manager putting his faith in a player who will be here next season, because even if he throws in another few Burnleys, I don’t think Ceballos will. It’d be nice he could make a contribution to what remains though, because there’s still plenty to play for.

Right, it’s 7.08am and Arsenal still haven’t signed anyone. I’m feeling completely justified in my decision not to do a live blog. I will leave you with a brand new Arsecast though, chatting Soares and Pablo Mari stats with @7amkickoff and Mari himself with @FlamengoENG. You can also win some socks from sockerclub.com. Listen/subscribe below.