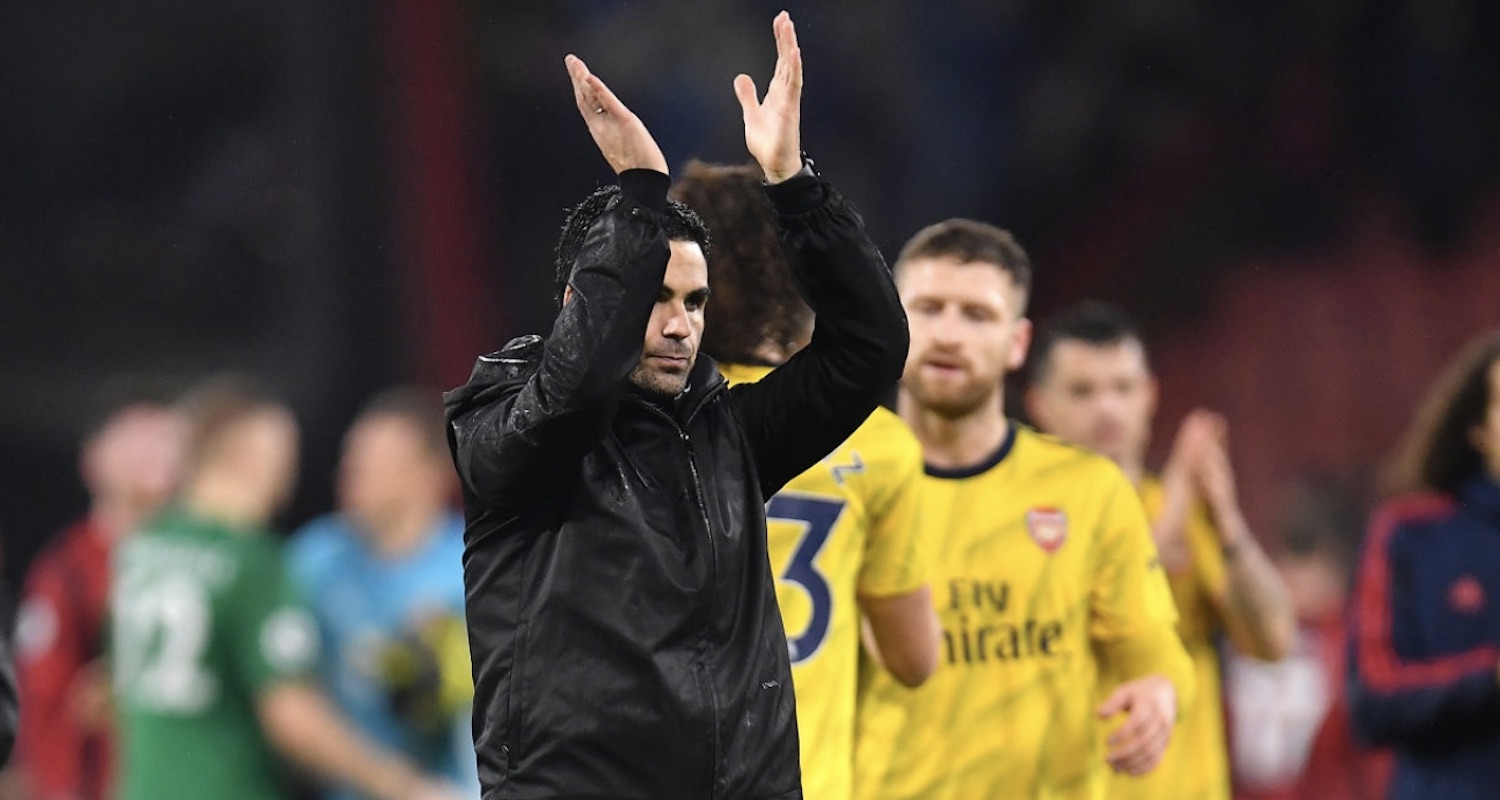 Afterwards, Mikel Arteta said that what he got from his players in terms of attitude and character was ‘better than expected’. It might sound like a throwaway comment in the wake of a game, but it stood out for me. It said that he had doubts about how this group of players would respond, so on a day which didn’t quite go as well as hoped when it came to the result, that was a positive.

There were others. I thought the first half an hour in particular saw us move the ball with a kind of confidence I haven’t seen for a while, and in doing so we found Mesut Ozil in space which allowed him to restart his creative engine. There were obviously times when Bournemouth threatened, an early save from Bernd Leno looked routine by his standards this season but was very important, and the home side had their moments.

On the sideline, Arteta prowled, bellowing instructions to his players which were easily audible on the TV mics. He seemed quick to praise and looked to micro-manage them through the game as they come to terms with what he wants from them on the pitch. Up front we struggled a bit, in part because Alexandre Lacazette looks to be in the worst form since his arrival at the club. Having not played for a couple of games, I thought he’d be fresh and energetic, but he looked sluggish and his touch was off. I know he’s got an issue with games away from home when it comes to goalscoring, but this was as poor a game as he’s ever had for us.

Deliveries from wide areas left something to be desired, Bukayo Saka got forward often but his crossing wasn’t what it should have been. I know he’s an 18 year old manfully doing a job out of position, so it’s harsh to point fingers at him, but given he’s naturally a winger – and we’ve seen him produce much better recently – he definitely had a bit of an off day in the final third. On the other side, there were some glimpses of Reiss Nelson’s potential, and he was involved in our second half equaliser – Pierre-Emerick Aubameyang tucking the ball home at the near post after the youngster’s shot had deflected into his path.

I thought central midfield was interesting. Lucas Torreira looked more comfortable and I thought we got a performance from him that was very encouraging. He was behind both Xhaka and David Luiz in passes and touches, but made 11 ball recoveries and positionally I thought he was back to something approaching the player we were so enthused about last season.

Xhaka generally did well also, but I feel like games where we concede first and the opposition are happy to sit off – as Bournemouth were – suit him down to the ground. It means he can have plenty of the ball, and to be fair there were a couple of very nice passes we should have made more from. However, I thought he could have done more in the initial stages of their goal, and there appears to be a fairly significant issue with him and his desire to stay at the club which we look like we’ll have to deal with. More on that below.

Although Bournemouth sat deep, thus denying Ozil the space he had in the first half, he still found Aubameyang a couple of times. Once the striker curled one just over, the second he couldn’t make the most of a really incisive pass, and Arteta was full of praise for the German afterwards. I know it’s early days, and there is so much water under the bridge at this point, but as a squad we really lack creativity and goalscorers, so in the very short term if the manager can get more out of Ozil we’ll benefit from it.

Lacazette’s dismal day was summed up by his inability to put us ahead after a superb Luiz pass put him through. To be fair, there was an excellent defensive intervention to deny him, but you feel like a more confident player would have made the most of that opportunity. Bournemouth rightly had a goal disallowed, and right at the death there was a break which really ought to have seen us score a winner but Joe Willock’s shot was easily saved.

So, a 1-1 draw away from home is a fairly inauspicious start to life for Arteta, but as I’ve said before there are no quick fixes here. The job at hand is so big and so difficult it is going to take time. At the very least though there were some green shoots in the way we played. We dominated possession for the first time in a while, we had more shots than them (although they had more on target), and it feels like a very small step in the right direction.

We don’t have long to wait to see if we can build on that because Chelsea come to the Emirates on Sunday, so there’s barely time to recover before we go again. Let’s see what happens.

A quick word on Nicolas Pepe whose absence from the starting line-up raised some eyebrows again. Maybe he’s not working hard enough. Maybe it’s as simple as that. However, it’s quite possible that he’s not 100% fit after suffering a bruised knee from a brutal challenge in the West Ham game a couple of weeks ago.

Yesterday, after being brought on late, he got into the game quickly, and was again subjected to another shocker, a scissors tackle which left him in a heap and in some considerable pain. On both occasions, the player making the challenge was extremely lucky to be just given a yellow card in my opinion. What was it Wenger used to call it, ‘dark yellow’, or something similar?

It probably says something about the way the opposition view Pepe that he’s on the receiving end of these tackles, so fingers crossed he’s not too badly hurt from yesterday, and I hope in future the referees offer him a bit more protection, because next time he might be leaving the pitch on a stretcher.

Meanwhile, as I mentioned above, there appears to be a problem with Granit Xhaka in that he wants to leave. His agent is quoted in Swiss publication BLICK, saying:

Look, I will say it frankly and honestly: we are in agreement with Hertha BSC and would like to go to Berlin. That’s what we said Arsenal’s club boss Raul Sanllehi and sports director Edu Gaspar – as well as the new coach Mikel Arteta.

Reportedly, he is also unhappy at the fact that he was backed publicly by Arteta who then told him in private he’d let him go in the summer. It’s all a bit precious from Xhaka that. If true, it tells you the new manager understands the situation well and the player’s desire to leave, but given how difficult it is to replace that experience in January, he’d prefer to keep him till the end of the season. Xhaka can still keep his agreement with Hertha Berlin, he might even get a better offer, and the club can sell at the optimum time.

Maybe we have to take that bit with a pinch of salt, but what seems indisputable is that he wants to go. His desire to do so is entirely linked to the Crystal Palace incident in which he still feels hard done by, and he has no desire to make any kind of reparations with the fans. He’s never apologised for his reaction, despite being given what would fairly be considered generous applause since. At this point there’s little to gain from delving into the nuts and bolts of that incident again, but if Arteta is demanding full commitment from his players, the fact that one of them is so publicly agitating for a move undermines that – regardless of what he does on the pitch as a professional.

If he so badly wants to go, let him go. Get a transfer fee for him, and reinvest. There are also reports that we’re about to sell Mohamed Elneny to AC Milan, so there might be more money there to spend, but the January factor is a complication. I think Arsenal are looking to bring in a central midfielder anyway, but this is a situation that needs some resolution because it’s been festering away in the background for a while now. I just don’t think if you’re starting something new, you should work with people who aren’t fully on board with the project.

That applies to Xhaka or anyone else with itchy feet.

Right, that’s just about that for this morning. As it’s the festive season and days, workloads and people’s availability are a bit all over the place, it’s tricky to organise things, but there will be a short podcast a bit later this morning. A kind of Arsecast Nano, or something, so watch out for that.

More from me here tomorrow, until then.