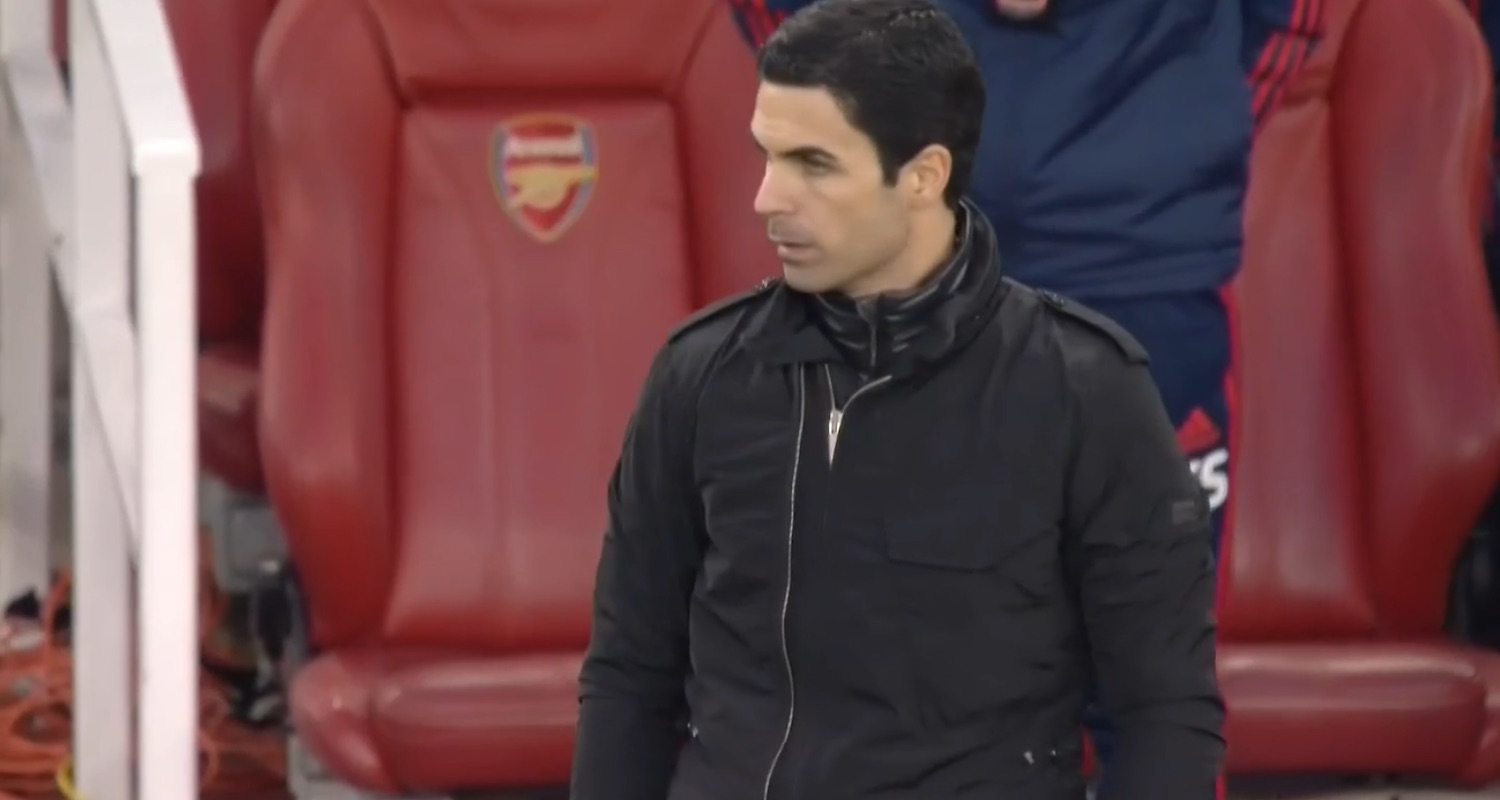 Having done so much well throughout yesterday’s meeting with Chelsea, to lose it the way we did so late in the game really hurt. And yet perversely, the fact it did is something for me to cling onto this morning. Defeat has become a matter of fact for Arsenal of late, and make no mistake – we’re in a lot of trouble because of that. What we did, how we did it, and the very avoidable manner of defeat are things which add to that pain, but at least I felt something again that I haven’t in a while.

The first half was really encouraging. The way the team was set-up and the way it worked so hard to retain its shape was great to see. The issue of compactness is one which has plagued us for a while. Unai Emery talked about the need to make the team more compact, but he could never get the players to keep their distances. We did that. We took the lead through Aubameyang after a great Chambers flick on, and we should have made it 2-0 but it was another leaden-footed day in the box for Alexandre Lacazette whose heavy touch saw a great chance go begging.

We even coped well enough with the loss of Calum Chambers who looks like he’s going to add to our defensive injury woes. I hope it’s not a cruciate but it looked like something serious, even if he was able to walk off the pitch despite the fact a stretcher came on. We were bossing Chelsea, and then Frank Lampard made a change – bringing Jorginho on for Emerson. After that, the momentum changed.

They began to dominate possession in a way they hadn’t before, but again I thought we coped with it pretty well. As the game went on though, the pressure intensified. I don’t recall them having too many chances – an Abraham header maybe – and that was about that. We were sitting deeper and deeper, and I don’t know that we had the players on the bench who could really have done a lot about that.

Nevertheless, with less than ten minutes of normal time we held the lead (it might even have been game over had Joe Willock’s effort on the turn been the right side of the post). Then, Lacazette was robbed too easily when he should have held possession on the right hand side, he gave away a free kick and from there Chelsea equalised. It was a hugely frustrating goal for a number of reasons.

The obvious one was the absolute howler from Bernd Leno who has been so good this season it felt especially cruel on him. Of course he should have done better, but having saved our bacon time and time again throughout this dismal campaign, he didn’t deserve that. Secondly, I think Jorginho was lucky to be on the pitch having avoided a second yellow for what was an obvious foul on Guendouzi. The exact same foul for which Torreira was booked in the 73rd minute and Maitland-Niles in the 90th.

Some have said Guendouzi was lucky to avoid a second yellow himself in the first half, and I think that’s fair, but Jorginho’s foul happened straight in front of the referee and he ended up booking one of our players for it. To top it all off, I think Jorginho makes a foul on Torreira in the build-up to the goal, so a triple-whammy.

Then the winner. This, I’m sure, will become part of the Mikel Arteta training manual for defenders from this point on. There’s a video doing the rounds of the manager during his time at Man City telling the players to stop transitions and to ‘make the foul’. Is it cynical? Of course it is. But it’s what you have to do, and it’s what we failed to do yesterday. Look at where Abraham picks up the ball, and look at Mustafi: 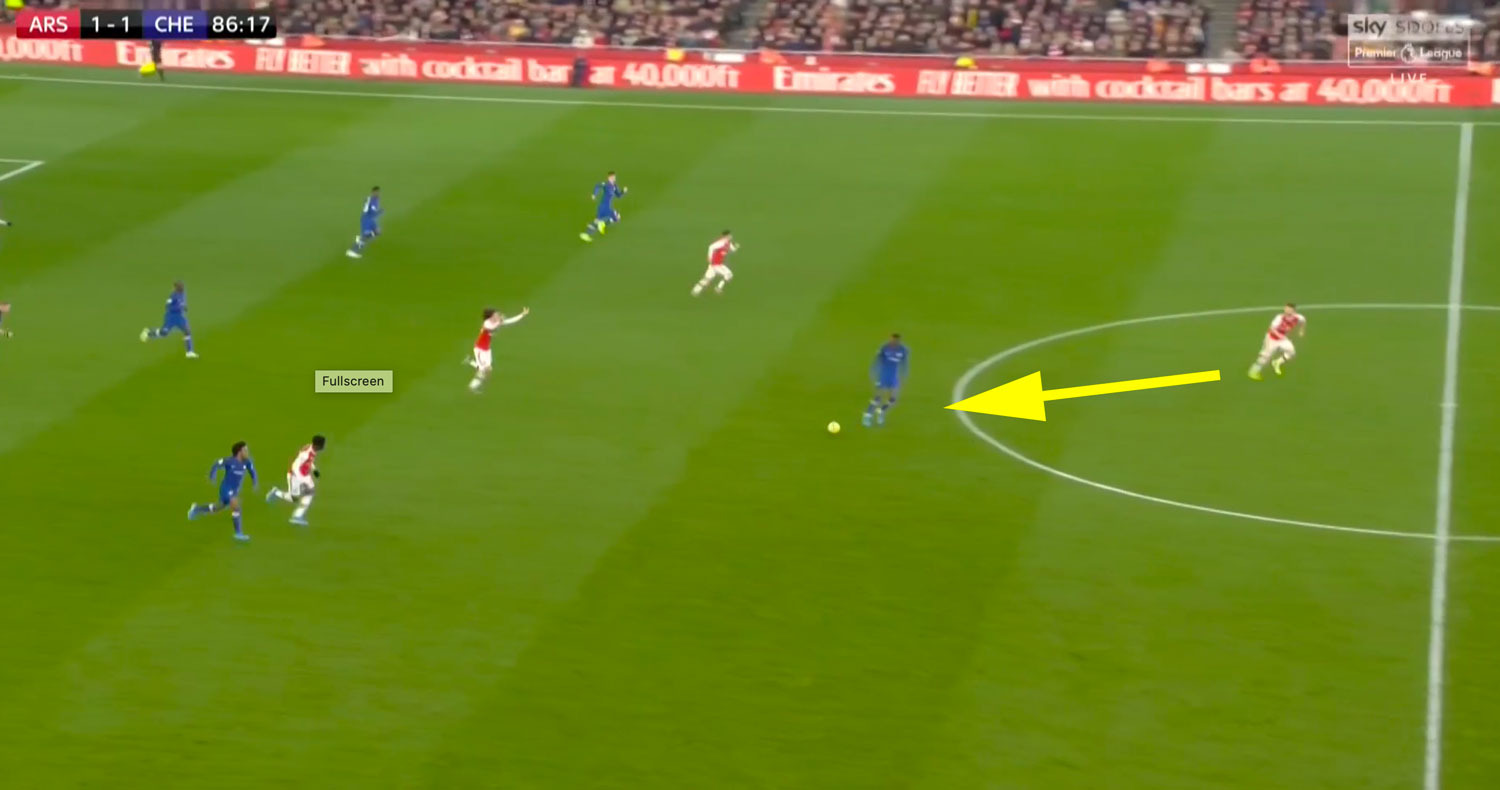 He has to go in the direction of the arrow. Luiz is behind him. Even if Abraham knocks the ball beyond him, you block him off, make the foul, take the yellow card inside the Chelsea half and then the team regroups. Instead, he flees the other way, Chelsea have all the space to run into, a knackered and probably injured Saka can’t get back with Willian, and Mustafi compounds his initial error by not getting anywhere near Abraham when he picks it up again in the box. If you watch the video, the defender never once looks to see where his man is – he’s ball-watching, and it’s calamitous defending.

It’s not a surprise that he’s so poor in that situation, because we’ve seen it time and time again during his Arsenal career. It’s why we tried so hard to sell him during the summer, but if the new manager needed a clear example for his players as to why we need to be more aggressive and stop transitions, then this was it. Along with the Chambers injury, it was also another reminder for those on high that the addition of a central defender in January is an absolute must, because however hard Arteta tries, some of these players are beyond help at this stage.

Another interesting post-match note from the Spaniard was how fitness levels are not what they should be:

We are asking them to do something different, to play at a different pace, much more aggressive and at the moment they suffered. We had a lot of injuries, we’re putting demands on young players. I don’t think that they didn’t want to do it or that they were scared, I think it was just too physical for them in the end.

I think that’s telling. We have a collection of fairly one-paced players who struggle to cope with the athleticism of the Premier League as we head into 2020. More than ever the physical battle is so important. Of course the quality of individual players, the tactical approach, and the buy-in to those things from the collective are crucial, but our players look jaded after 70 minutes, and that’s a big problem. At this time of the year too, when it’s hard to much between games because they come so close together, it’s even more difficult, but it’s something that badly needs to be addressed.

I know we’re looking for things to be positive about at a time when the club is going through its worst run in an age. It’s 1959 since we lost four consecutive games at home (via Opta), and having won just once in our last twelve Premier League fixtures, we now have to look over our shoulders at what lies beneath in the table than those above. A few good results would make a significant difference, but wins are hard to come by, and with United next on Wednesday, it’s hard to be confident.

However, I do agree with Arteta that there were things to be pleased about the way we played. You could see in the first half how organised we were, and that’s been lacking for a long time. We were aggressive in the tackle, went after the second ball well, and overall despite the fact that Chelsea had more possession as the game went on, we did pretty well defensively until it all caved in. Maybe those two goals in four minutes undo all of that for you, but for me that’s a positive and something we need to work on.

What becomes ever more clear to me though is that we’re asking a new manager to put a halt to what is a rot that set in well before Unai Emery, but definitely which got worse under his watch. Squad building, player recruitment, coaching, fitness, they’ve all been  below par, and the scale of the job Arteta has to do is far greater than many think. He needs support from those on high in January because this is close to being a genuine crisis now.

I realise it’s hard to feel too confident about asking the same people who presided over some iffy transfers in the last 18 months or so to do better, particularly in the January market, but unless we do something this season is going to be even more difficult than it is already.

The light at the end of the tunnel is the impact Arteta is having on the players in a short space of time. If he can continue that, I think we’ll start to see results improve. Perhaps not massively, but enough to calm the waters a bit. The avoidable nature of yesterday’s defeat is something you can work off too.

At the end, as the final whistle blew, I felt like we didn’t deserve to be the losing end of that game. It’s been a while since that was the case. I liked what the players did and how they tried to play (most of them). I liked the set-up, the structure and shape, the commitment, and the desire. In the end, as with so many of our results, individual errors cost us, but there were definitely things that were better, and right now, that’s something I can hang on to.

James and I will be recording the Arsecast Extra this morning. As ever if you have questions or topics for discussion, send to @gunnerblog and @arseblog on Twitter with the hashtag #arsecastextra – or if you’re on Arseblog Member on Patreon, leave your question in the #arsecast-extra-questions channel on our Discord server.

That’ll be up for you around lunchtime. Until then.