Home Arseblog, the arsenal blog Arsenal 1-2 Brighton: A team in disarray, a club broken from the... 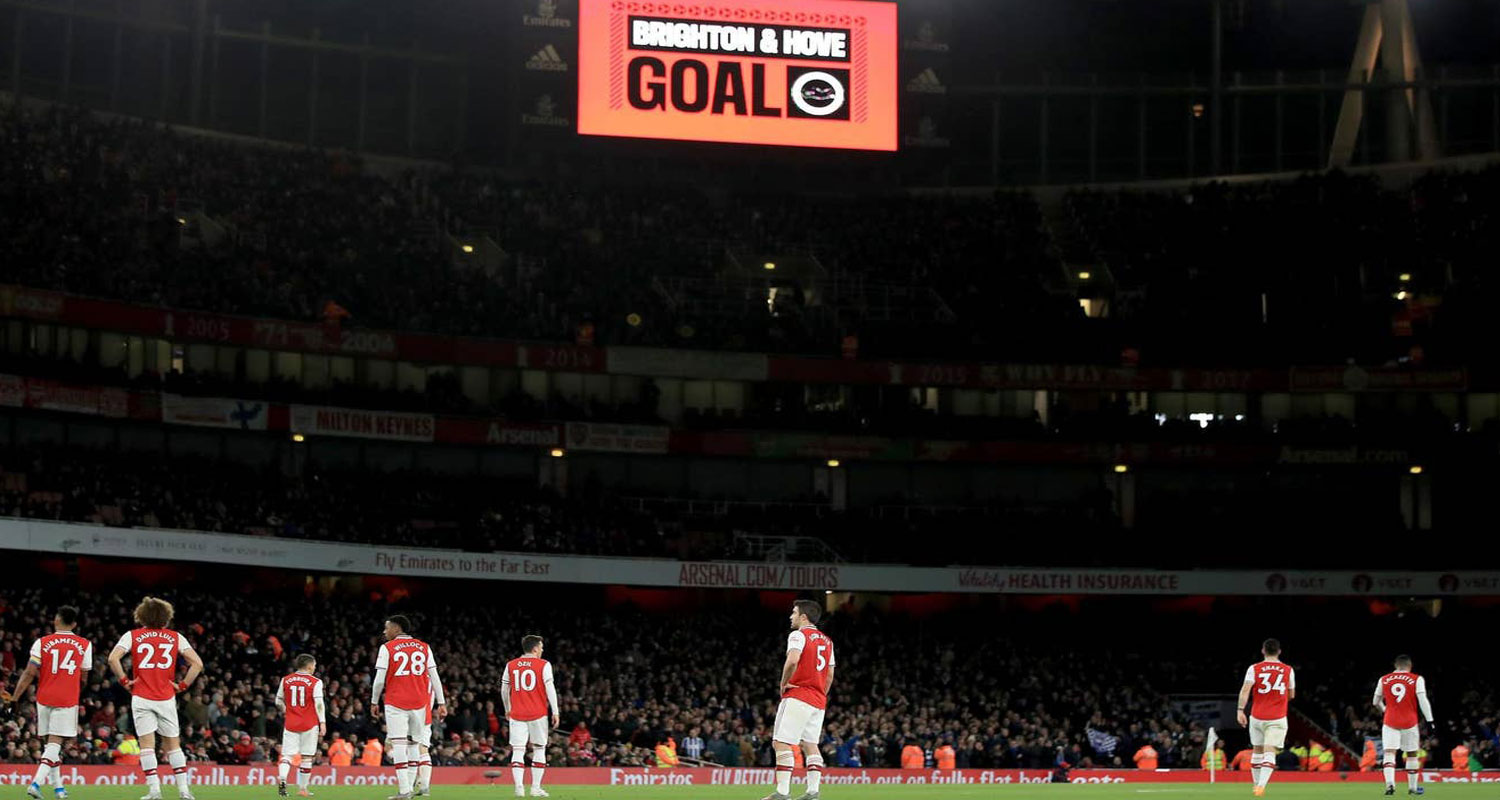 Hector Bellerin said after this game he was ‘lost for words‘, and who can blame him? I know not many Arsenal fans share the issue, because I’ve seen plenty of words since we lost 2-1 to Brighton last night. Words of anger and vexation, but also plenty of sadness and despair because we’re now going through the worst run of form that most of us have ever experienced as fans of this club.

There are those who sat through similar in the 1970s, and it’s apparently 1977 since we endured a spell like this. That shows you both how bad it is, and how unprecedented it is in modern times. We are in the middle of something very difficult, very troubling and potentially very, very damaging.

When Freddie took charge last week he said he had belief that we could make the top four. What else could he say really? This morning, we sit 24 points off the league leaders after 16 games of the season, 10 points away from from the Champions League places, and while we look safe enough in 10th place, our downward trajectory means that unless things pick up – and quickly – we’re going to be staring over our shoulders at the relegation places. Top four is a pipe dream.

How on earth has it come to this? And how much worse could it get? The sad answer is that if we’re incapable of beating teams like Brighton, Wolves, Crystal Palace and Sheffield United, we’re also going to struggle when we face Man City, Chelsea and Man Utd in the next few weeks.

We are the Millennium Falcon when hyperdrive doesn’t work. We’re chugging along, doing our best to avoid the imperial fighters shooting the shit out of us, and we need R2D2 to twiddle the zeeble to get us going again. Apologies for that really technical analysis, but this is a side which needs to find some measure of confidence and belief again, because I think a lot of what’s going on is down to that.

“It’s the players, stupid!”, something that was shouted at me a few times last night, and yes, of course they’re a big part of it. We have some players at this football club who I wouldn’t give tuppence for. I feel desperately sorry for Freddie when it comes to the centre of our defence, because the two players he picked last night have been so bad this season he felt he had to try and recall Mustafi whose response to that opportunity was simply to remind everyone he’s even worse than they are. He didn’t even make the bench last night.

All the same, I think we can ask some questions of last night’s line up. I don’t understand Kolasinac over Tierney at all; and I don’t get the obsession with squeezing Lacazette and Aubameyang into the team together when it means playing the captain on the right. He’s not great there, and I didn’t really like the way he so publicly castigated Joe Willock for what I thought was a clever pass inside the defender late in the first period. He’s the captain, he might be frustrated, but that’s not leadership or helpful in any way.

I know we need goalscorers on the pitch, but we also need to find some balance. Again, it sounds weird to say it when Lacazette scored our goal, but I do think it’s an issue. This conception of them being a great partnership doesn’t really bear that much scrutiny if we’re being honest. Great mates, no question, but they’re not a classic pair of strikers who feed off each other. Especially because one of them, a lethal finisher, is being played out wide. I lost count of the times he was the one putting in crosses.

Having started so brightly against Norwich on Sunday, it was disappointing not to see the same control and energy last night. Freddie said afterwards:

The main thing is we didn’t show up in the first half. We were very passive and we had a chat at half-time, made a tactical change and all of a sudden we looked like a team.

Pepe came on at half-time for Willock, and we did look better. Frankly, I think our way forward through this is to weight the team as much as possible towards the attack. Trying to find midfield balance is something Wenger and Emery before Freddie failed to do, despite their best efforts (and they had a lot more time), so it’s a lot to expect a rookie coach to solve in such a short period; while the less said about our defence the better, but it’s a shambles back there.

Poor Bernd Leno. Every single game there’s a moment where the cameras are trained on him after he makes yet another save or concedes yet another goal. Sometimes he’s waving his arms, bemoaning the hapless defending he’s asked to bail out time and time again, but other times there’s this look on his face. Like a man who has returned from war and seen too much horror. The things he has seen. It’s there in his eyes. How he doesn’t have some kind of PTSD I have no idea, because he’s asked to witness the slaughter in no-man’s-land every time he plays.

Luiz waved his arms about after he allowed Maupay to head home the winner last night, but it was half-hearted. All of it. The attempt from Hector Bellerin to stop the cross, the Brazilian waving his mop of hair in the vague direction of his man and pretending to look surprised at the outcome.

So of course we have to look at the players. They are under-performing, and the lack of any confidence is a big problem. Freddie said:

They look very short on confidence. In the first half they were scared to get the ball and a bit scared to move, they were just standing still. That’s something we need to talk about. They need to have a win, we need to dig out a win and get them some confidence. They can do it because they showed it in the beginning of the second half and they did it really well for 20 minutes.

There’s that word ‘scared’ again. You’ll remember Granit Xhaka used it earlier in the season, and was lambasted for it, but we have a big problem when a new coach is saying the same thing just two games into his spell in the job. It tells you that the malaise runs very, very deep, that the psychological scars have never healed. And for me it goes back to last season when that end of season run saw us miss the top four and lose the Europa League final badly.

Hindsight is a wonderful thing, but that’s when we ought to have parted company with Unai Emery because the alarm bells it set ringing shouldn’t have been ignored. But they were, and here we are. We tried to solve it in the transfer market, and I think we can see with some assurance that coming up on five months into this season, what we did has not made us better. In fact, we’re worse. Much, much worse.

A team that finished a point off the top four – an improvement on Wenger’s last season in terms of points, and reached a European final – is now on the brink of a relegation scrap. Some of it is on Emery, we’ve been over and over his part in the team’s performances, but I think we need to look above him and Freddie to find the people who have had the biggest impact on this team and this club.

Raul Sanllehi was the summer mastermind, lauded for the deals we did and the way we did them. That table has well and truly turned. He and his Football Executive Committee bought and sold the players, this is no longer a club where the manager carries the can for transfer business. Emery had some input, but the whole point of moving to this structure was because we wanted to move away from that all-powerful club manager to one where a head coach is slotted in as and when needed to work with the players he has. The buck stops elsewhere now.

Above them again an ownership who have been more engaged and visible in recent times, but who are responsible for putting these people in charge. Ivan Gazidis appointed Sanllehi; Sanllehi ousted the forward thinking Sven Mislintat to wrestle all the football power at the club; and the Kroenkes have allowed him to do it, in thrall to his decision making. Look where we are under his stewardship.

KSE took 100% control of Arsenal in 2018, but have been de facto in charge since 2011. The decisions made and taken have all been sanctioned and ratified by them, and while many have said their method of putting people in charge and letting them run the show is the right one, that only works if those people are good at their jobs. Week on week, it’s hard to make that case, isn’t it? We’re run by people who aren’t good, KSE are our Hicks and Gillett, and these are dark times.

It’s also really difficult to know how Freddie might be able to turn this around. Which isn’t to be critical of him at all, by the way, but this is a set of circumstances and a run of form that no Arsenal manager has had to deal with for decades. He’s willing, determined, smart and loves this club, but it’s a bit like handing a rookie doctor a scalpel and asking him to perform a heart transplant.

Something has to be done quickly. I go back to a blog I wrote before Emery’s departure, and suggest Rafa Benitez again. Experience, quality, and he can run a club despite the fact the owners are massive wankers. Even on a short-term deal it would be worth exploring because without something radical, without something which will halt this inexorable slide down the table, we’re going to suffer a season which will live long in the memory but for all the wrong reasons.