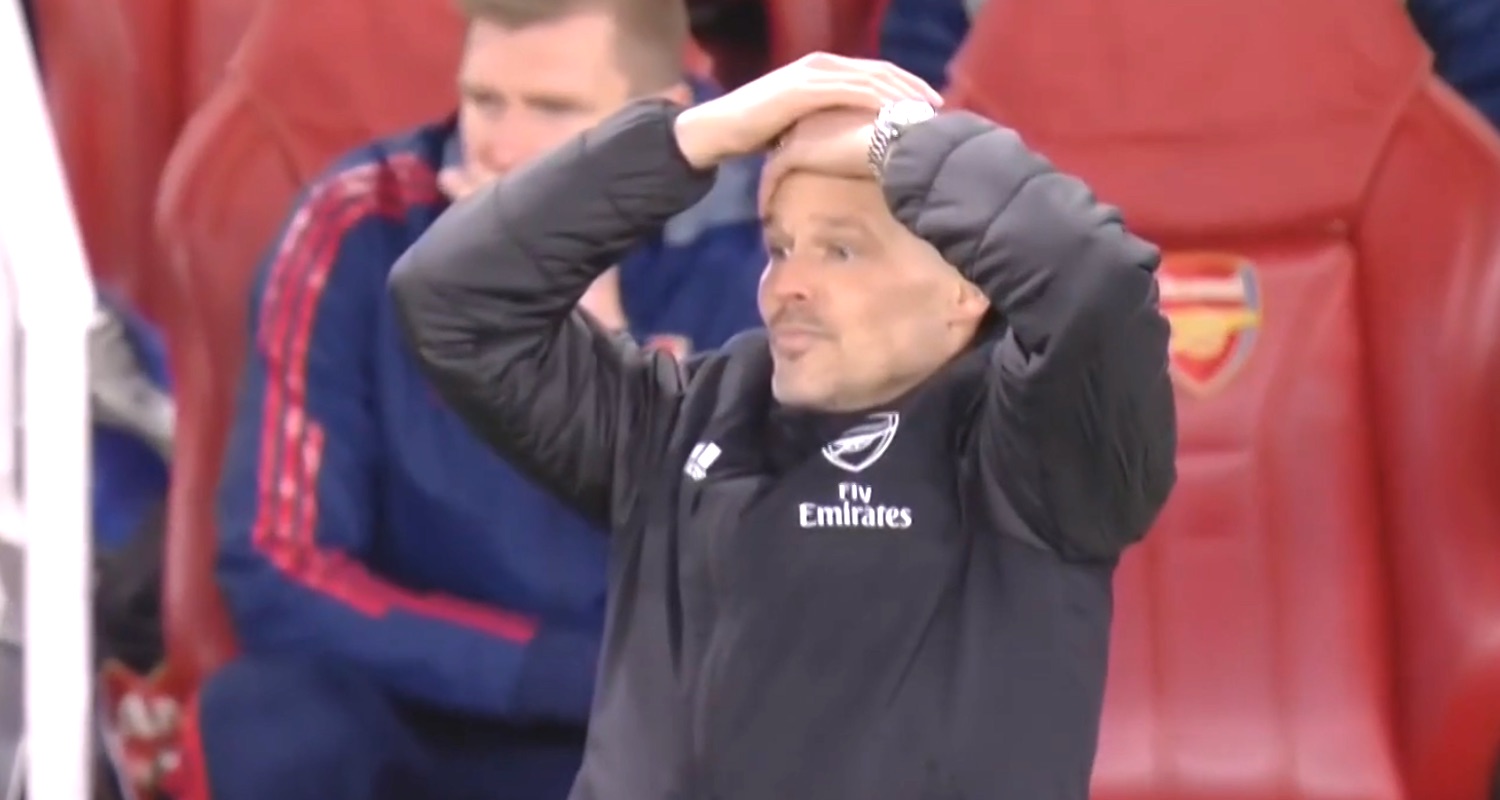 As the final whistle blew yesterday, music began to play from the loudspeakers in the Emirates Stadium. It wasn’t the risible ‘Sweet Caroline’, now somehow considered the anthem of a good result. Instead, the jaunty festive tune ‘Driving home for Christmas’ rang out and while I know it’s that time of year, it struck me that somewhere along the way the lines between sport and entertainment have become too entwined, and we’ve lost sight of the fact we’re first and foremost supposed to be a football club.

This was a sobering day for Arsenal. We all know there’s a gulf between us and Man City, but yesterday was more evidence that they are so far ahead of us it’s scary. There’s a chasm between us being even competitive with them and where we are right now, and an even bigger one in being close to as good as they are. I realise there are myriad reasons for it, some of which aren’t really relevant to this discussion, but it was as stark a reminder as you’ll ever have about how far we’ve fallen.

To me it says something about the culture of this football club that playing an upbeat, jolly song like that after that kind of lesson was handed down to us was considered acceptable. I don’t mean we should greet it with a funereal march or some kind of death metal, but Man City never got out of second gear yesterday and won comfortably. We barely troubled them, our one shot on target came in the opening minute, and beyond some nice moments from our youngest squad members, there was nothing positive about what happened. But … don’t worry! … we’ve got some nice Christmas music for you as you trudge out of the stadium that was built so we could compete with the biggest clubs in Europe, not become fodder for them.

To be fair, I thought there was some promise in those opening 60 seconds when Gabriel Martinelli showed the kind of drive, intent and danger that will make him a top player, and his shot was saved by Ederson. Within a minute City were ahead though. Fernandinho was allowed to ghost past Pepe who barely even tried to make a tackle, Calum Chambers lack of pace allowed Jesus to get the wrong side of him, and when he pulled the ball back Kevin de Bruyne’s brilliant finish put the visitors 1-0 up.

The defending for their second was just as bad. Guendouzi gets suckered in high up the pitch, allowing City to break through what you might very kindly call our ‘press’. Again de Bruyne is involved, Chambers and Maitland-Niles are there in body but don’t do enough, and Kolasinac is too far from Sterling so when the cross takes a nick he’s completely done, and it’s 2-0. Some will say City made it look easy because of their quality, and obviously there’s an element of that, but this is far more down to Arsenal not doing the basics, not doing the bare minimum you should expect from a professional player.

I thought it was really interesting afterwards to hear Freddie talk about some of the things our players should do, but just don’t. For example, he made a clear reference to City’s tactical fouling. They stop danger high up the pitch with small fouls that they get away with because they do it all the time. You might think it’s cynical or not in the spirit of the game, but that mindset needs to get in the sea because without it we’re even easier to take advantage of.

The other thing he said was in relation to Sead Kolasinac getting injured. He twisted his ankle in a challenge, but at 2-0 down and understanding full well how the day was going to go, he couldn’t get off the pitch quickly enough. Freddie said of the delay in getting Bukayo Saka on:

Obviously, Sead went down, then our player started getting ready. The weather meant he had a lot of clothes on. We tried to get him on. That’s something we need to learn with young players, for them to get ready quicker. But then when you are injured and you are down, you need to stay down until the players are ready so we can make the change.

Again, he’s talking about the experienced players doing more. Just using common sense. I think Bernd Leno, as fantastic as he’s been this season, needs to pay attention here too. He had the ball at his feet, he could have just clumped it out for a throw so we could make the change. Instead he kicked it long, City got the ball back, and with 10 men de Bruyne took advantage of some more feeble Arsenal defending to make it 3-0. Why did nobody on that pitch tell the keeper to kick it out? Where was the experience and leadership from senior players? Where was the common sense in the first place? It’s so frustrating.

The second half was almost the most pointless 45 minutes of football I’ve ever watched. If the referee had said at half-time, ‘Let’s call it a night here folks’, I don’t think anyone would have complained. City kept us at bay like a giant with his hand on the forehead of small child who gave up windmilling his arms because even at his tender age he knew it was futile.

Still, it wasn’t without incident. On the hour mark, Freddie hauled off Mesut Ozil and replaced him with 19 year old Emile Smith Rowe, who was making his Premier League debut. The German kicked away his gloves in frustration afterwards, perhaps it was with himself more than the decision, but having witnessed what happened with Granit Xhaka just a few weeks ago when he trudged off the pitch, the way he ambled to the sideline and then made public his unhappiness felt like something he could and should have handled better in the current climate.

Just as the Joe Willock change in the Europa League final in Baku felt pointed, so did this. Freddie said he wanted more energy in midfield, which says plenty, but it was almost like a message from the touchline to those on high about what our future holds and where the focus should be. It’s not in £350,000 a week superstars, this isn’t a situation which can now buy ourselves out of. It’s one that requires careful planning, and a serious, mid-long term strategy. Let’s not kid ourselves that a couple of purchases in the transfer window will make this better, particularly from a club whose recruitment has been so consistently poor, and ill-managed for so long.

Afterwards, Freddie’s frustration at what’s going on was obvious as he called for clarity:

As I’ve said to the club, it’s a great, great honour to do this. Of course Per is the academy manager and he’s doing two jobs in one go. I think it needs clearing up to make a decision so that everybody knows. That’s something I’ve said. It’s totally up to the club. I’m very honoured and trying to do things as well as I can, but I think that it would be good to make a decision regardless of what it is.

We’ve asked a rookie coach to take over a team that is basically broken and told him to turn things around with no staff whatsoever beyond Per Mertesacker, and the reserve goalkeeping coach. Unai Emery was fired on November 29th. It’s now December 16th, and while I’ve been told that some news regarding the position is ‘imminent’, Freddie Ljungberg has no idea what’s happening and that says a lot about the way the club is being run. It’s not the first time he’s asked those upstairs to provide some kind of clarity, and while we can all understand it’s a difficult process, the fact that he’s talking about it so publicly speaks to a lack of communication from on high but also tells you he understands how urgent it is. We’re in free-fall and refusing to use the parachute.

Firing and hiring managers is something football clubs do all the time. It’s not always a simple thing, but it’s part and parcel of the game and something you need to be prepared for. Arsenal seem spectacularly unready for this, despite the fact there was a mountain of evidence that at the very least they should have considered the possibility. Right to the end, there were noises of support for Emery from Raul Sanllehi via his back channels, but the end of last season should have been the time when they started seriously thinking about what do if things didn’t get better. Instead, only as it became impossible not to sack Emery, did they begin to draw up our ‘shortlist’ of too many names of too many managers with too many styles and philosophies, and you get the feeling these people are just making it up as they go along.

The hard part is that while this feels very sudden, this is in inexorable decline that began years ago under the auspices of KSE. It doesn’t just coincide with their 100% ownership, it goes back further than that. Right now though, the problems are accelerating, we’re tumbling down the table and we’re turning to the same people to try and solve the problems they’ve helped foster and fester. We are where we are right now because of how the club is being run and who is running it.

We lack leadership on and off the pitch; we lack direction and organisation; we lack people who understand football; and we have far too few who understand Arsenal and what this club means to so many. I know we’ve added some in recent times, and if there’s any hope it’s that they can influence things, but how much we can put on Edu or Per Mertesacker when ultimately they’re not the decision makers?

Perhaps we’ll add another former Arsenal name in the near future, and if we do I wish whoever it might be all the luck in the world, because they’ve got a big, big job on their hands put things right.

Podcast out before lunchtime, until then.