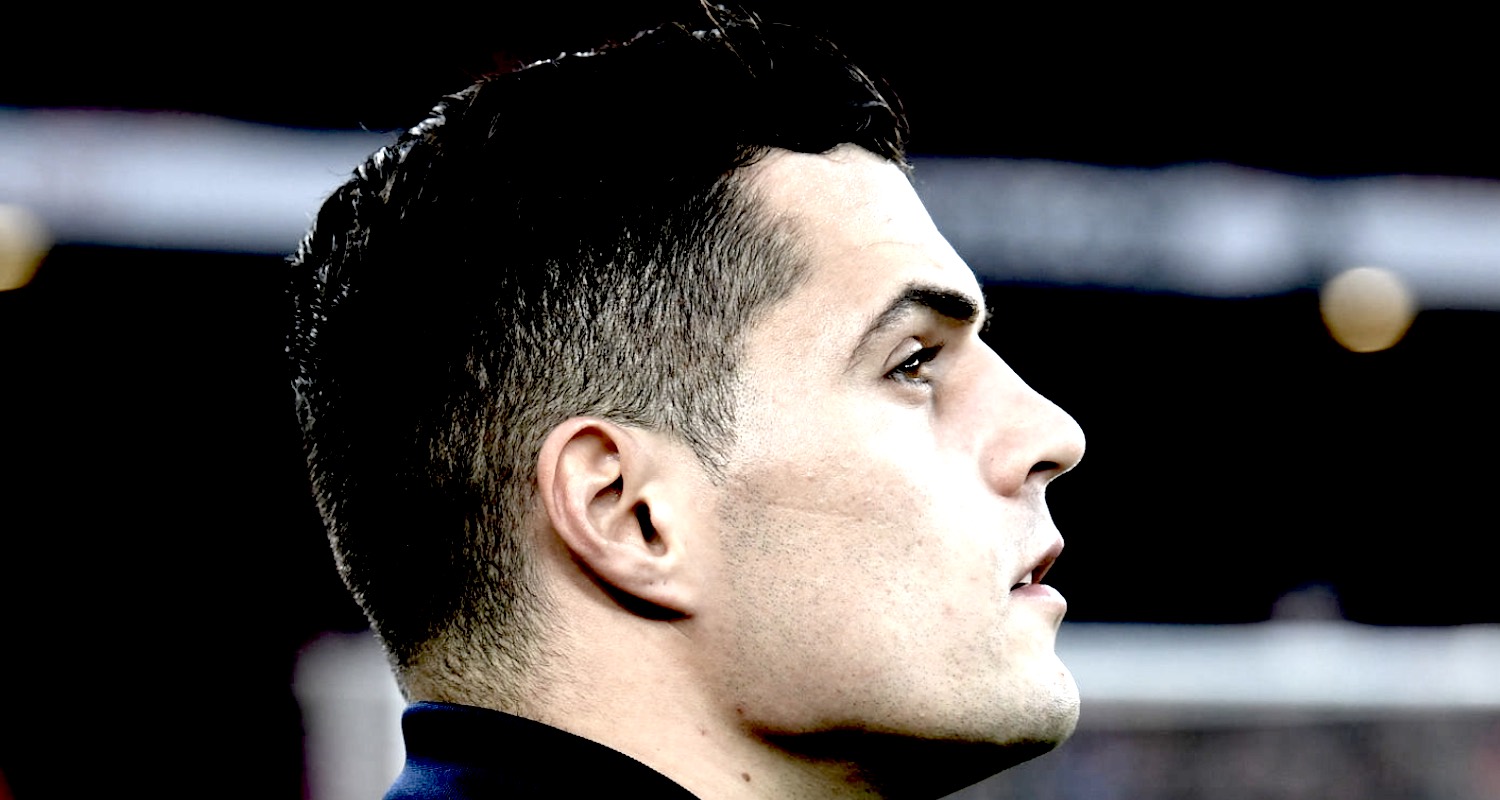 So, after four days of hearing nothing from Granit Xhaka after what happened against Crystal Palace last Sunday, the Arsenal captain broke his silence with a statement released late yesterday evening.

In the interests of clarity, I’ll reproduce it below in its entirety:

After taking some time to reflect on what happened on Sunday afternoon, I would like to give you an explanation rather than just a quick response.

The scenes that took place around my substitution have moved me deeply. I love this club and always give 100% on and off the pitch.

My feeling of not being understood by fans, and repeated abusive comments at matches and in social media over the last weeks and months have hurt me deeply.

People have said things like “We will break your legs”, “Kill your wife” and “Wish that your daughter gets cancer”.

That has stirred me up and I reached boiling point when I felt the rejection in the stadium on Sunday.

In this situation, I let myself be carried away and reacted in a way that disrespected the group of fans that support our club, our team and myself with positive energy. That has not been my intention and I’m sorry if that’s what people thought.

My wish is that we get back to a place of mutual respect, remembering why we fell in love with this game in the first place.

Clearly there’s a fair bit to unpack here, and I think the first thing I need to say – even though it should be blindingly obvious to everyone – is that the abuse, threats and vitriol directed towards him and his family are completely and utterly unacceptable. Not a single one of us out there would not be affected if we were subjected to that kind of thing. It’s disgusting on every level.

I also think, perhaps inadvertently, it raises an issue that seems to get overlooked in all this, which is the responsibility of these platforms to properly manage the behaviour of people who use them. I realise that Twitter, Facebook, Instagram etc, are gigantic and thus more difficult to manage, but do they do enough to combat the nastiness? I don’t think so, and by being so slack they actually become a contributory factor to it. If people know they can get away with it, they’ll do it.

I can tell you this: if someone came on Arseblog and or Arseblog News and left a comment akin to the ones Xhaka mentions, the comments would be deleted and the person in question banned from the site forever. I fully understand the technical difficulties that the big social media sites have when it comes to doing this, but whether it’s football, sport, politics, or any other subset of society, the trolls exist and continue to flourish and it feels like the sites themselves pay little more than lip-service to the abuse, threats and nastiness. There has to be more pressure on them to deal properly with these kind of people.

I also think that is really important that we distinguish between people who behave like that and post things of such a disturbing nature, and the vast majority of Arsenal fans who – whether they’re a fan of Xhaka or not – would never do anything of the sort. People can discuss, debate, even criticise, but what he was subjected to from those idiots should not somehow become representative of the entire fanbase.

It’s something I touch on a bit in today’s Arsecast – recorded before the statement was issued last night – and there’s this idea that because one self-entitled, ill-mannered lout, for example, abuses Aubameyang in the street for no good reason that all of a sudden ‘Arsenal fans’ are the worst. I can’t tell you how much I take exception to that. Like any large umbrella group of people, football fans or otherwise, we have a section whose behaviour is unacceptable, but those people do not and should not define all of us.

So, while I have every sympathy for Xhaka being on the receiving end of that kind of abuse, I’m a bit uneasy at the conflation of fans in the stadium – who were reacting to something very specific that was happening on the pitch and during a game – and the worst kind of online extremists. I don’t like what happened to him on a human level, but I don’t think we should be made feel a collective guilt because of the deplorable actions of a few.

As I’ve written throughout this week, and spoken about on the podcasts, this whole thing has always been about more than a few jeers when his number came up against Palace. The way the captaincy decision was handled didn’t help him one bit, particularly as he wasn’t a popular choice for it in the first place, and I don’t think Unai Emery has helped him at all. As something of a symbol for the team’s struggles under this coach, frustration was directed towards him, and it wasn’t nice, but he didn’t help himself either.

He ‘reached boiling point’, as he said himself, but regardless of that, to do what he did coming off the pitch wasn’t the right behaviour for any player, let alone the captain. He goaded the fans, he egged them on, swore at them, threw the armband down, and made it worse than it should have been. The ‘I’m sorry if that’s what people thought’ part of the statement skirts very close to the ‘I’m sorry to anyone who was offended’ kind of non-apology that’s become so prevalent these days.

What’s striking too is that this is a statement released by Granit Xhaka himself on his own Instagram, rather than via an official club channel as would normally be the case when it comes to something like this. It suggest that despite all the discussions and meetings that went on this week, there was still a real distance between what the club wanted him to say and what he was prepared to say himself.

Which is fine, if he doesn’t really want to apologise or doesn’t feel like he should ask forgiveness, then he’s perfectly within his rights to issue the kind of statement he did. I fully respect that. Similarly though, we’re all entitled to our own opinion on said statement, and maybe there’s something in the wording that is more pointed than it looks at first:

I let myself be carried away and reacted in a way that disrespected the group of fans that support our club, our team and myself with positive energy.

He does appear to make a distinction, that he understands he disrespected the fans who actually support the club, but in statements such as this, you need real clarity and it’s not quite there overall. I thought he should have said more about his position as captain, and extra responsibility it brings, but maybe that’s just me, and I’m unsure if this statement going to bring about the kind of healing necessary.

Nevertheless, he’s said what he want to say, and now it’s up to fans to take that at face value, to accept the sort-of apology, and the explanation, or not, and move on. Perhaps it will cause some introspection about online discourse, but I suspect the people who were willing to sling that kind of abuse will be still be willing to do that regardless of what he’s said. They won’t have an awakening because they hurt Xhaka’s feelings and made him storm off the pitch, that’s basically what trolls want. However hurtful those words are, they need to be viewed through the prism of this unpleasant section of Internet culture, and perhaps the best course of action is – if they affect you that much – limit your exposure to them. Those of us who would never resort to that kind of abuse remain vehemently opposed to that kind of behaviour.

Anyway, it’s one of those subjects which I think is going to cause plenty of debate throughout today and tomorrow. I’m curious to see if this is enough for him to return to the squad for the Wolves game, to lead the team out as captain, because right now he retains the armband and there’s not even a hint from him that he’s willing to relinquish it, nor any acknowledgement of the special position he holds at Arsenal Football Club in the context of his own behaviour.

Hopefully we can move on though, we have bigger fish to fry, starting with three points tomorrow. This whole thing has been a handy distraction for some from the bigger issues which are one point from our last six, two wins from our last eight Premier League games, an entertaining but questionable exit from the Carabao Cup, and we now need to focus on what really matters. How big a part Xhaka will play in the future remains to be seen, but the football is key now.

I recorded an Arsecast yesterday before the Xhaka statement, chatting about the Liverpool game, Ozil, Xhaka and more with Charles Watts (@charles_watts). James and I are going to do another short podcast this morning to chat about the statement in a bit more depth, but the main pod is out now, listen/subscribe below.