Home Arseblog, the arsenal blog Vitoria 1-1 Arsenal: Gunners’ one shot on target turns out not to... 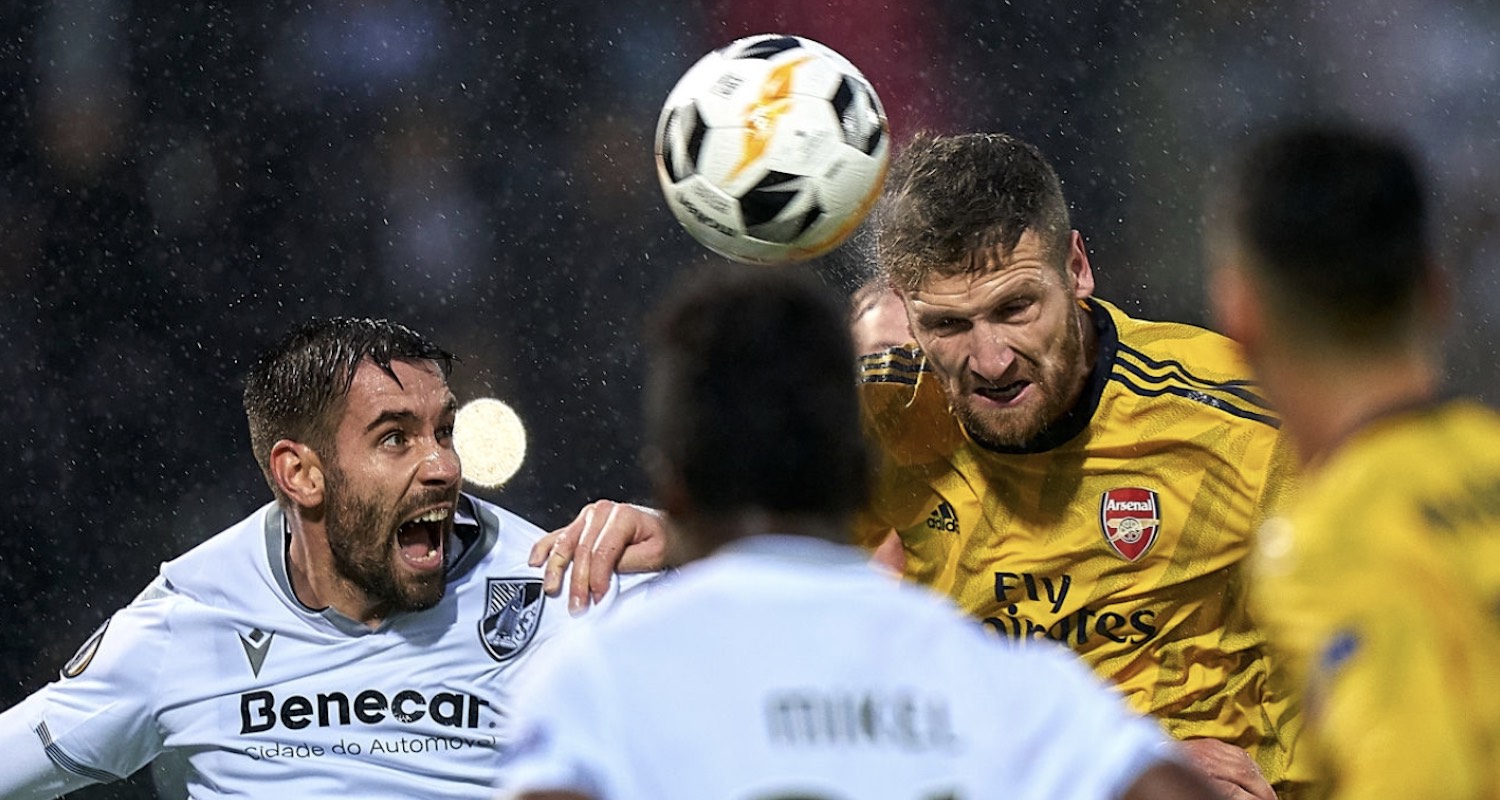 It’s rare that I don’t quite know where to start a blog about a game, but in this case it’s difficult. The Europa League has been a bit of a light in the darkness this season, with some exciting games and performances, but it was murky stuff yesterday afternoon against Vitoria.

Arsenal had just one attempt on target for the entire game, and that came in the 80th minute when Shkodran Mustafi’s header went in at the far post from Nicolas Pepe’s excellent free kick delivery. That we took the lead at that point of what was a truly soporific game of football, and still couldn’t hang on to take all three points just sums us up right now.

Their goal made me laugh. It wasn’t a fun laugh, it was a kind of sad, coping mechanism laugh. What else would we do but concede in injury time to a team who, despite being man for man inferior to us pretty much all over the pitch, made more chances than we did throughout the 90 minutes? Emi Martinez was by far the busier goalkeeper, especially early on, and by the end they’d had 15 attempts on goal to our 7 (4 on target to our 1).

“They are very defensive with a big defensive structure,” said Unai Emery. “It is not easy because they were defending very deep and together, and to find and create small spaces was not easy against this team.”

It’s also not easy when you play the way we do. I watched us last night, having changed formation again, having deployed our £72m record signing from the start, having brought on Alex Lacazette with half an hour go to see him starved of service the same way Gabriel Martinelli was, and I couldn’t find a single thing to like about the way we played the game. You can be boring and staid, which we definitely are, but also effective. Plenty of teams have married those two things, but we’re both highly tedious and ineffective. 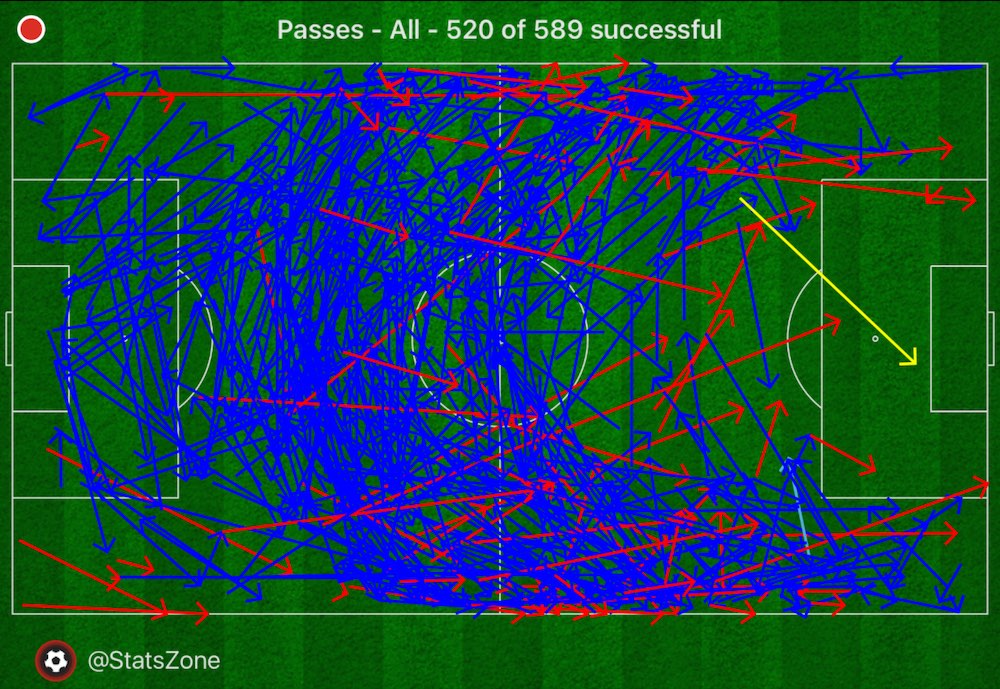 Remember when we used to bemoan the fact we’d go side to side without enough penetration? Unai Emery has taken it to the next level. 8 of our 9 top pass combinations were all defender to defender, Maitland-Niles to Pepe the exception. Midfield, such as it was, was non-existent. We’d have possession, there would be a massive empty space where players should be to receive the ball, and in order to keep it we’d go backwards, the three centre-halves would roll the ball Simpsons style between them for a bit, and we’d start the same mind-numbing process again.

I know I’ve said this before, but results aside if you could see green shoots of encouragement in terms of how we played, or were trying to play, you’d be far more inclined to give a manager time and the benefit of the doubt. However, not only are there no green shoots, it feels like Emery is salting the earth so nothing can grow at all. I cannot understand what he is trying to do, what football he wants this team to play, or why whichever formation he picks we look far less than the sum of our parts.

Well, I say that, because with every passing game it’s more and more obvious that he is the problem. There’s been enough turnover in the squad and sufficient investment for us to avoid the whole ‘Well, he just needs his own players’ or ‘If we could just sign X player or Y player’ everything would be all right. What we’re seeing is a true manifestation of Emeryball, and it’s nothing short of dreadful.

I realise this was just the Europa League and frankly the result doesn’t bother me that much. It’s a point away from home, we remain top of our group, and there’s no chance that we’re not going to qualify for the knock-out stages. In isolation this isn’t a game to lose your reason over, but when you see Arsenal play like that against a team like Vitoria it’s hard to take. When your manager’s outlook seems so small-time, overly-concerned about a side who have won just 1 of their last 7 games, it just adds another layer of disenchantment and apathy to what’s going on.

It’s now 1 win in 6 for us, and ahead of Saturday’s clash with Leicester, it wasn’t not the kind of confidence boost you’d have hoped for. Vitoria, with all due respect, are a poor team but over the two fixtures we’ve made them look half-decent. They hadn’t scored a goal in the Europa League until they met us, they hadn’t won a single point until last night.

There’s this weird thing going on with Arsenal right now in that the club’s stated ambition is to finish in the top four, get back into the Champions League, and build on that platform to eventually be the kind of team that can challenge for the title and the most important trophies in the game. Yet we’re asking a manager with the biggest inferiority complex I have ever seen to try and make that happen. Emery is scared of teams we’re expected to beat, it’s been a running theme throughout his tenure. Give him a big match against a big side and he can generally work his inherent underdog stuff, but ask him to go and dominate and control a game against a team fifth in the Portuguese league and it terrifies him.

It’s why we get out-shot by opposition time and again, it’s why we took just 2 points from 9 available against Sheffield United, Crystal Palace and Wolves, and it’s why we’ll continue to do that. Funnily enough, the fact that this is where our mindset is right now, and that Leicester would be considered strong favourites for Saturday, might be a positive in the context of that game. Plucky little Arsenal heading for the King Power to take on Sir Jaime of Vardy and his Knights. We might get something from that game, people might think it’s evidence that we’re capable of turning a corner, but around that corner lies a fearsome chihuahua and we’ll shit our pants again, our brown trousers visible for all to see as we scurry to clean ourselves up.

I don’t really know what else to say about last night. What is there? I suppose the fact that Kieran Tierney played the 90 minutes at wing-back (Sead Kolasinac’s best position) makes him unlikely to start on Saturday. So too Nicolas Pepe who, like most Arsenal players, struggled, but still made a telling contribution with his assist. Perhaps the Weds – Sat thing might work in our favour there, but we’ll find out more about what Emery is thinking later in the week when he meets the press.

I’ll leave it there, join me tomorrow for more blogging, and for an Arsecast in which I’m sure there’ll be plenty to talk about.