Home Arseblog, the arsenal blog Arsenal 1-2 Frankfurt: Sanllehi and Kroenke, a horrible mix of power and... 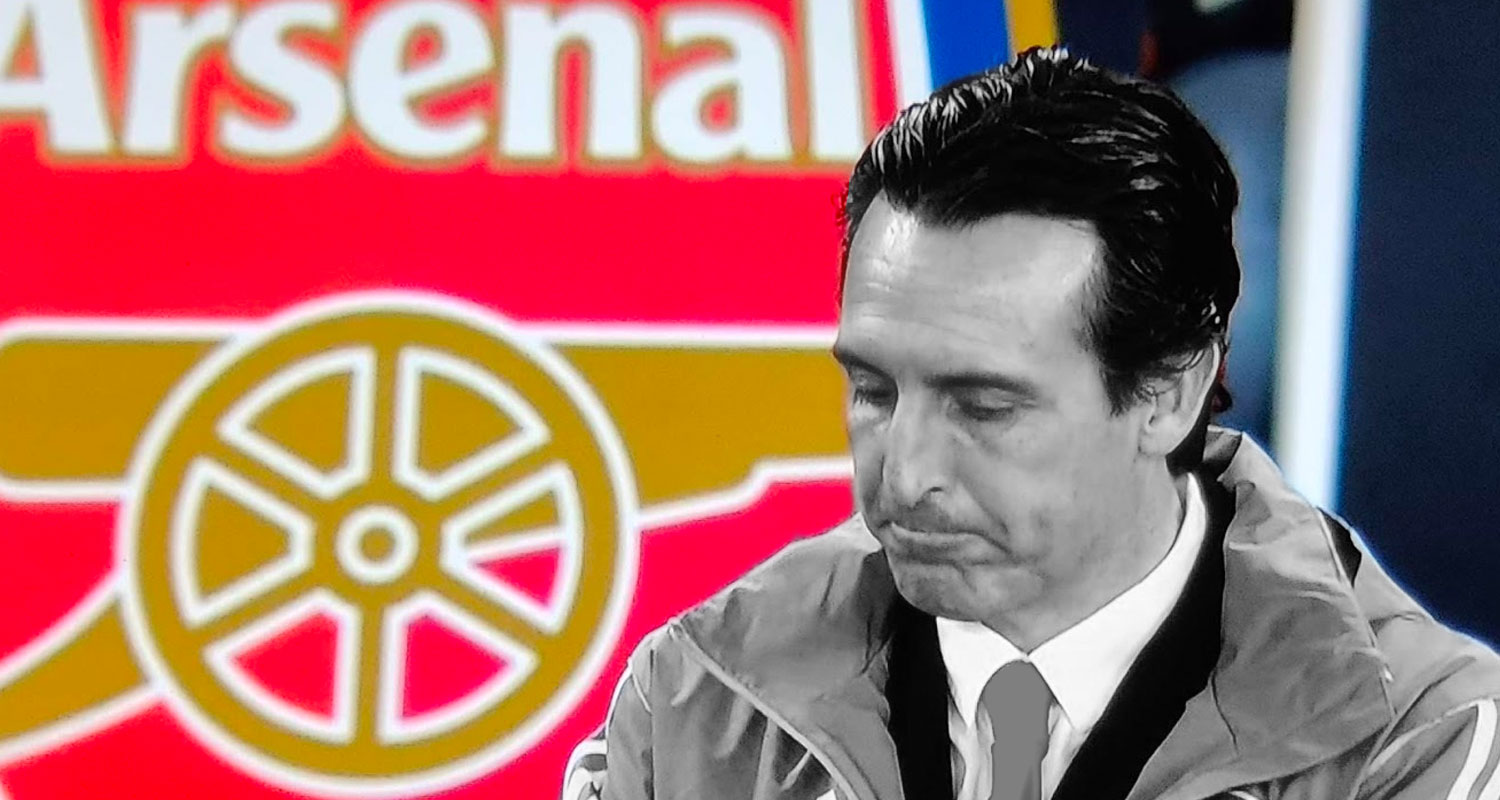 There were brief moments when you could see what little is left of Arsenal last night. The youthful exuberance of Joe Willock and Bukayo Saka; the obvious promise of Gabriel Martinelli; and late on a flowing one-touch move which ended with Calum Chambers being caught just offside, but it was the kind of football we’ve rarely seen in recent times.

Those things were like flickers of what we used to be. What’s left now is dull and lifeless, the last vestiges of a football team that is so far in the doldrums it’s just painful to watch. Seeing them play that way in front of a half-empty stadium which was half-empty again by the final whistle was pitiful. It should be what finally prompts the people running this club into doing what they should have done well before now, but it feels like we’ve been here before and yet they allow it to continue to the next game and the next game and the next game.

It’s seven games without a win, and while the other result in the group makes our qualification for the knock-out rounds more or less assured, it was another dismal performance from Unai Emery’s team. He’d promised to make us more compact, his methodology was to move David Luiz into central midfield. The Brazilian lasted half an hour or so, he should have come off earlier having picked up what looked like broken ribs, but he obviously wanted to try.

The first half, in the grand scheme of things, wasn’t that bad. Martinelli was dangerous, forcing the keeper into a save and having a header cleared off the line. There were attacking flourishes from Willock and Saka, and Frankfurt were very poor. We weren’t a whole lot better, but in injury time Saka switched it to Martinelli, he crossed and Aubameyang scored to put us 1-0 up.

That was our last shot on target for the rest of the game.

Emery’s Arsenal are never more brittle than when they’re ahead and so it proved again. To be fair, we had a couple of chances early in the second half. Willock was denied, then Chambers shot over after good work from Granit Xhaka, but after that we capitulated and never got back into it.

Their first came when Kamada picked up a pass on the edge of our box, turned and was ushered towards goal by Sokratis (‘Here you go my good man, please have a shot’), and his left-footed effort curled in. Then, after the Greek international had given the ball away cheaply and we ended up conceding a corner, they scored again. Nobody closed down Kamada, he cracked home a shot inside the near post.

Just to recap: a player who has scored just once in 23 games this season comes to the Arsenal, bangs in a brace like he does it every week, and that’s enough for us to lose the game. It’s so Emery’s Arsenal it hurts.

Still, that was the 64th minute. We had time. Emery had surprisingly brought on Ozil for Martinelli just before that second goal. I don’t quite know why. It’s not a knock on the German, but the young man was doing quite well – even if he was being played out of position. That left us with one sub left, and when Mustafi picked up an injury (I think Martinez stood on his toe), he brought on Lucas Torreira and dropped Xhaka back into centre-half.

Alexandre Lacazette and Nicolas Pepe sat on the bench, their full face snood thingies leaving just their eyes visible. What we might have done with one or the other of them on the pitch remains this morning in the realms of speculation, but I guess it doesn’t matter now.

Arsenal didn’t have a shot on target in the second half. Is anyone surprised? There were some boos at the end from the few left in the ground, and how could you blame them? This isn’t about a lack of support, it’s the only message fans can give in that moment. You might argue that the tens of thousands who stayed away sent just a message just as loud, but in combination nobody should be under any illusions about how supporters feel about this.

It’s been interesting over the last week or so to see a bit of a shift in the discourse. There’s almost sympathy for Emery that he’s being allowed to continue. Personally, I wouldn’t go that far. My desire to see a new man is based entirely on the fact he’s been obviously under-performing for too long now, and ultimately he’ll be all right. He’ll get his money, he’ll take some time off, have a nice holiday and walk back into a decent job somewhere else.

All the same, he looks a broken man on the sideline, not so much prowling around his technical area any more, but desperately looking on as this group of players perform in a way which he can’t possibly be instructing them to. This can’t be the way any serious head coach wants his team to play, so whatever he’s trying to do it’s not getting through, it’s not working, and every single game provides us greater evidence of that. He knows it’s over, he has done for weeks.

Meanwhile, upstairs in the heated seats of the Directors Box, Raul Sanllehi presides over this godawful mess. Unless he’s being told by KSE that there’s no way he’s allowed sack Emery, this is on him. I know I spoke a bit earlier in the week about the FEC (Football Executive Committee), but let’s get it right: since Gazidis left there has been a power grab at this football club and Sanllehi with his big, low to the ground, Barcelona balls is the man to have taken it.

The former Chief Executive is gone; he then got rid of Sven Mislintat whose approach to running the football side of a club and recruitment was to be clever, smart and forward thinking rather than using a big book of agent buddies to do transfers; he’s got Vinai beside him who, it was made quite clear, looks after the business side of things (dodgy deals and all); and while we’ve brought Edu in – who appears to be little more than window dressing – and that contracts guy is in the group, the real power lies with Sanllehi.

It’s quite funny actually. For years it was all on Arsene Wenger, and whatever else you think of him he loved the club, he had a genuine connection to it, achieved unbelievable things, and if he stayed too long it was out of a desire to make things better because he knew standards had fallen. Now, we’ve restructured, but instead of the power being with one man who at least knew football inside out, it’s with a suit who has the ear of the Kroenkes.

It’s not funny though, is it? Like Emery was, Sanllehi was given so much goodwill this summer after what we thought was a good transfer window. He laughed it up, Don Raul strolling across the Ken Friar bridge having selfies taken with the fans. Where is he now? Anyone seen him? I guarantee you he’s not anywhere he might run into supporters. Much like his predecessor Gazidis, when the going got tough, he’s nowhere to be seen. He’s been hiding and letting his head coach/manager take the heat.

And above him again, Stan and Josh allow it. Their disengagement has seen this polar shift in power at Arsenal. It’s the way they operate. They delegate, let their people run things, but what if the people we have running things aren’t very good, or are motivated by different things than we’d like?

I don’t expect Emery to last much longer. He needs to be put out of his misery, as do we, the players and everyone else. We can’t move forward if we allow this to continue any longer, but let’s not forget under whose auspices it got this bad, and who allowed it to fester to the point where the Emirates was a sea of red – and it wasn’t Arsenal scarves and shirts, it was empty seats.

Podcast will be up mid-morning, until then, take it easy.