Home Arseblog, the arsenal blog Arsenal 1-1 Wolves: It’s over for Unai Emery + what has to... 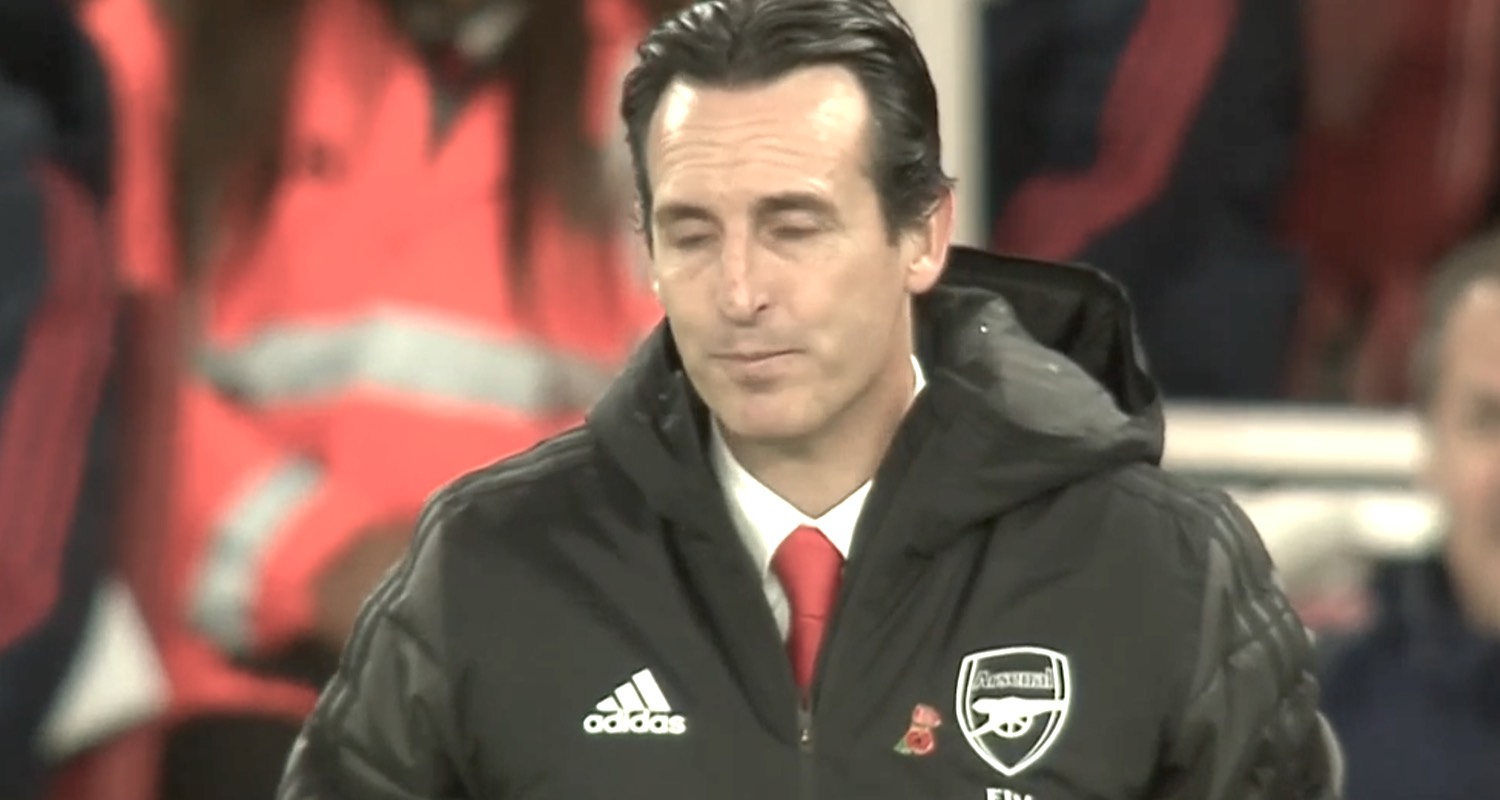 At this point it almost feels redundant discussing the match in any great detail, but let’s give it a little go all the same. The team was pretty much as expected, except for the fact Nicolas Pepe was left on the bench so Unai Emery could play another midfielder at home. Dani Ceballos was that man, Mesut Ozil came back into the team, and up front Pierre-Emerick Aubameyang and Alexandre Lacazette operated in a two.

We started poorly. Wolves dominated possession and by the 10th minute had had five shots. We were camped in our half. Ozil began to drop deep to pick up the ball and with that we slowly turned the tide in our favour. We began to play in their half, and asserted some dominance. Torreira shot just wide after Ozil and Lacazette did well, and in the 20th minute we were ahead.

A David Luiz cross found Lacazette in the box, he controlled it, played it square to Aubameyang and he finished coolly to make it 1-0. Perhaps a goal against the general run of play, but it wouldn’t be the first time we’ve done that this season. So, we’re ahead at home, with a platform to go and build on. We didn’t. We couldn’t. We can’t ever seem to do that under this manager. We did have a couple of chances, Aubameyang shot over, the keeper saved from Lacazette, but we didn’t exactly turn the screw.

Wolves forced Leno into a brilliant save, perhaps the shot was a bit straight at him after we’d been opened up, but the German deserves credit for making the stop not long before the break. The second half began like the first with the visitors on top, Arsenal fairly soporific, and the game itself fairly scrappy.

Emery made his first change on the hour mark, sending on Gabriel Martinelli for Lacazette. A bit odd, but not as odd as then throwing on Bukayo Saka for Torreira in the 73rd minute. Again the Uruguayan was deemed expendable by the manager, but with all due respect to Saka, who I like, why not Pepe? It felt a strange move, and it was hard to work out what our shape was at that point.

Minutes later Wolves grabbed their equaliser when Ceballos let his man run off him from a throw in, and the cross was headed home when Jimenez out-jumped Calum Chambers. Arsenal conceding from a winning position, like night follows day. Still, there were 14 minutes plus injury time to find a winner. Throw on Pepe, see if he can make something happen. But nothing happened until Emery’s last throw of the dice which was Sead Kolasinac coming on for Kieran Tierney.

At home, we desperately need a win, and he’s putting on a left back? What on earth? There was no mention of Pepe in the post-match press conference, which surprised me because it’s a legitimate question. Perhaps he was unfit, and it’s not uncommon for a player incapable of doing 90 minutes to be on the bench in case you need him. But if he wasn’t fit enough for the seven minutes he gave Kolasinac, why was he on there at all? If he was fit enough, why didn’t Emery use him? It’s baffling management, not least because with Chambers, Sokratis and Luiz it would have been very simple to shift to a back three and throw the kitchen sink at Wolves in the final stages.

If you look at the subs, it looks like Emery was more afraid of losing the game than he was interested in winning it, which wouldn’t be a surprise given the conservatism and cautiousness he’s displayed since he arrived at the club. Throwing on a couple of kids and then eschewing the club’s record signing when we so badly needed three points is either incompetence or something more pointed. Either way, in terms of game management it left a lot to be desired and it might well cost him his job.

Afterwards, when the boos at the final whistle had died down and he met the press afterwards, he suggested rather bizarrely that the players had carried out his instructions on the day well:

The result is a bad result, but tactically I think we worked how we wanted. The players tried, they worked, so now we need to finish that match and focus on the next one.

What can you say? I could go through the list of post-game, post-miserable performance buzzwords and talk about the lack of cohesion, the lack of a real identity in the way we played, no fluency, no aggression or control for most of the game, but what is the point? You all saw it, you’ve seen it all season long, and last season too. This is not a new phenomenon, this is who Unai Emery is and the initial newness of him created a bit of momentum but it’s well and truly gone now. This Arsenal are team are shuddering to a halt under this manager.

Here are some cold hard facts:

So, despite a summer which regenerated a lot of the goodwill which was lost by the appalling end to last season, and which refreshed the squad in a way that the majority of people were happy with, we’re just seeing more of the same from Emery. Nothing has improved, nothing looks like it’s getting better, there’s no defined style of play, defensively we’re a shambles (just two clean sheets from 11 Premier League games), and you cannot tell me that the players are on board with this. They’re struggling because of Emery, and I believe the squad we have is capable of a lot better than this.

At this point, we’re just delaying the inevitable by not replacing him. He’s not going to turn this around, and while I realise a Twitter poll isn’t a fully accurate measure of fan sentiment, the results to the one I posted yesterday speak for themselves: 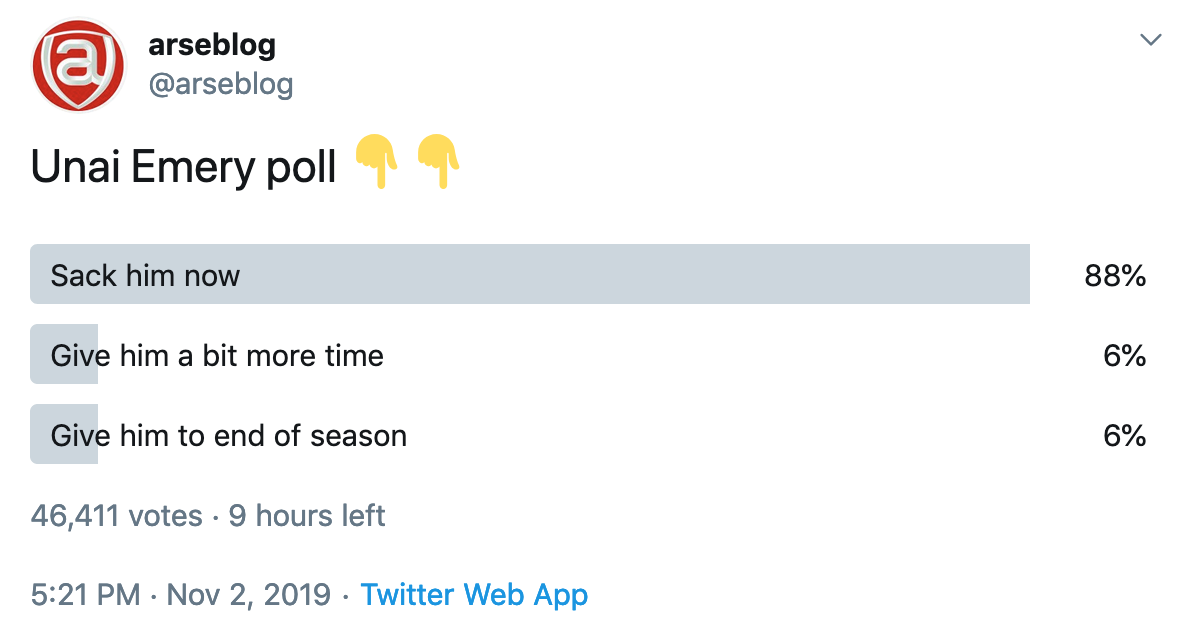 Coming up on 50,000 votes – a not insignificant sample size – and 88% of people think he should go. I don’t think we’re going to win away at Leicester under Emery – it would be a shock result based on everything we’ve seen up to this point anyway – so what are we waiting for? How bad does it have to get and how many vital Premier League points do we have to drop before we do what really needs to be done?

This hasn’t been a good week for the club on any level. The Xhaka thing was obviously a major issue, but Emery came out of it looking weak, as did the club itself. Republishing Xhaka’s Instagram post as the captain’s notes in the programme was something of an own goal, and the way the whole thing was allowed to drag on for a week hasn’t reflected well on Raul, Edu and the people who are supposed to make decisions and run this football club the way it should be run.

Similar prevarication over Emery, in the vain hope it gets better so they don’t have to do the difficult thing, will erode faith in them even further. There was a sense after what happened this summer that we had good people in charge, who at least knew exactly what they wanted Arsenal to be. If this is it, if this is what’s acceptable to them, then we’re in big trouble. The longer this goes on, the more it reflects as badly on them as it does Emery.

And as for what comes next, I’m not sure, but I can tell you that Arsenal fans need something and someone to believe in again. We do not need the kind of appointment that will instantly create division and acrimony, and I think you all know who I’m talking about here. Emery was our first go at replacing Wenger, it hasn’t worked, and we now have to try again. There’s no shame in that, we got it wrong as many football clubs do with managerial appointments, and in fairness few have had to deal with the complication of replacing a legacy manager whose influence over the club was so strong.

The club made it very clear that young players and the academy were an intrinsic part of how we were going to build for the future, so panicking and bringing in a spent-force, cheque-book manager who is completely at odds with that philosophy and who would more than likely waste this generation of talent makes no sense. Of course we need somebody who can improve the team tactically, and get us playing decent football again, but we also desperately need a measure of harmony and unity. After a week which has seen fans, players and club divided in all kinds of ways, their remit now must be to find someone to bring everything together again, on and off the pitch. It should go without saying that bringing in someone who so many people actively dislike, and feel is anathema to what they want from Arsenal, would not do that.

Quite who that is remains to be seen, and it will cause debate no doubt, but they’re paid a lot of money to do the jobs they have, and it’s time we see them act. We hired a coach who said he’d do lots of things he hasn’t done, or hasn’t been able to do, so if the board and the football executive committee do likewise it’d be hugely disappointing. They made it clear they wanted an Arsenal team built around top talent and exciting Academy players playing good football and becoming competitive again, and that’s where the expectation levels will be when it comes to the next manager – whenever that happens.

The first part of that process should take place as soon as possible. There’s nothing to gain from delaying Emery’s departure, because the quicker that happens, the quicker we can start to put in place the next man to try and make things better. We’re a third of the way through the season, we just can’t afford to drop points the way we have been, and the longer we wait, the more damaging it could be.

A bit of a long one on a Sunday, I know, and believe me I’d like nothing more than to be talking about a routine home win, but it is what it is. James and I will be recording an Arsecast Extra tomorrow, so join us for that, and in the meantime enjoy what’s left of your weekend.