The divergence in performance between Arsenal’s cup and Premier League games has been one of the talking points of the Gunners season so far. A shadow side has handed out insouciant shellackings against the likes of Frankfurt, Standard Liege and Nottingham Forest so far in this campaign, while the ‘first team’ have played in a semi-permanent state of discombobulation.

A large part of this is due to the lower intensity of the cup games and the quality of the opposition. Nottingham Forest think they have a shot at promotion from the Championship this season and came to the Emirates waving the white flag. The 3-0 win in Germany was actually more akin to the sort of pendulous, haphazard, “we could win this 3-0, lose this 3-0, or draw this 3-3” encounter commonly seen in the league.

Liege however, were consummately taken apart by an attacking quartet of Martinelli, Nelson, Willock and Ceballos in the team’s most flowing display in months. Liege play in a technically and physically inferior league to the Premier League and they had little answer to Arsenal’s swashbuckling attacking approach.

Group stage football is also one of modern football’s most revolting, yet strangely tolerated ills. The matches lack jeopardy and consequence, it is football, quite literally, by numbers, that is absolutely, totally and 100% intended as a profit-making exercise with the sporting endeavour bleached out as far as possible. The pursuit of gate receipts and TV money thrash the competitive element to nil.

In short, it doesn’t exactly persuade the underdog to juice their battery in pursuit of a result. Even if Liege had manfully fought to a draw at the Emirates, what difference would it have made, really? These are essentially exhibition matches. In 2017-18, Arsenal played a second string side at home and away against BATE Borisov in the Europa League group stages- an experiment they didn’t repeat last season when they played the same opposition in the knockout rounds.

Looking at the comparative results, maybe Arsenal would have had an easier time of things in Barysaw in February had they fielded the stiffs. Though there is a sense of apples and oranges in comparing Arsenal’s cup displays with their league displays, I still doubt that ‘the first team’ would have turned Liege or Nottingham Forest over quite as emphatically as the juniors did, even if the opponents remained as accommodating.

‘The first team’ scored three times against Aston Villa yet looked like an exploding clown car in doing so. Part of the reason the second string has looked more fluent is the construction of the midfield. The heatmap below shows that Arsenal demonstrated a heavy left-sided bias in the Liege victory, but they were able to because the lines between defence, midfield and attack were cleaner. 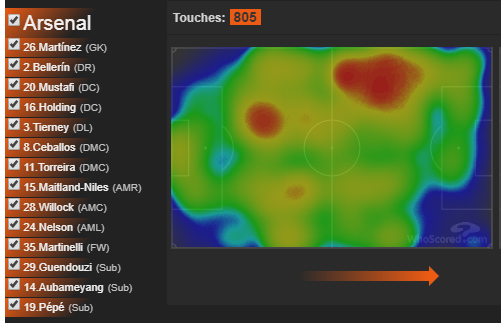 Kieran Tierney played and, unlike Sead Kolasinac, he has the elasticity to bomb up and down the left flank. Dani Ceballos likes to hover to the left too, where Reiss Nelson was stationed. As a natural right-footer, Reiss likes to cut inside. On this occasion, he had Ceballos nearby as a supply-line, Tierney constantly overlapping him and Gabriel Martinelli played upfront. Martinelli is a left-winger by trade and spent most of his time in the left half-space. 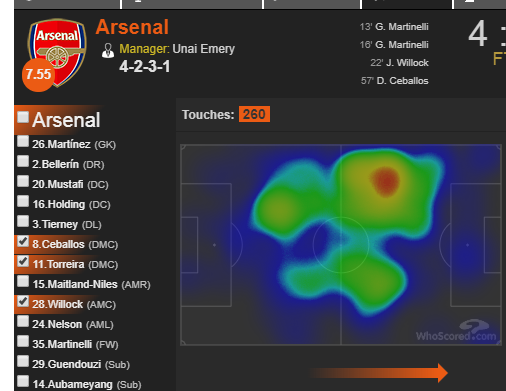 In short, Arsenal had partnerships that the Premier League side haven’t quite forged yet. They had strength and they leaned into it. Against Bournemouth, the midfield heatmap becomes far more depressed. No Tierney means Ceballos and Saka only have an occasional overlap on the left. The main issue, however, is that the midfield three plays in a far more stretched manner. 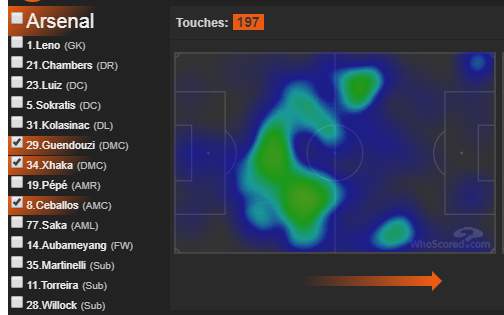 If Ceballos favours the left side, Guendouzi very much favours the right. The two together cause the midfield structure to thin out and separate and Arsenal’s play becomes far less concentrated. Add in the presence of Granit Xhaka, whose job is to effectively sit between these distant poles and it’s easy to see why the midfield is pulled apart like wet tissue paper. Now let’s look at the midfield heatmap for the Nottingham Forest league cup match. 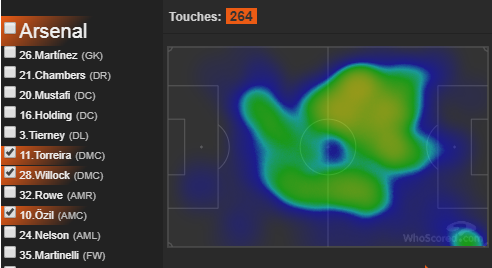 Torreira, Willock and Özil are a slightly more compact structure and it shows in this example. Torreira and Willock form more of an orthodox double pivot, with neither player wandering too far to the tips of the pitch, leaving a platform for Özil to Özil as he provides a link to the forwards. Torreira’s greater athleticism is also more suited to bridging the gaps that riddle the Premier League midfield. 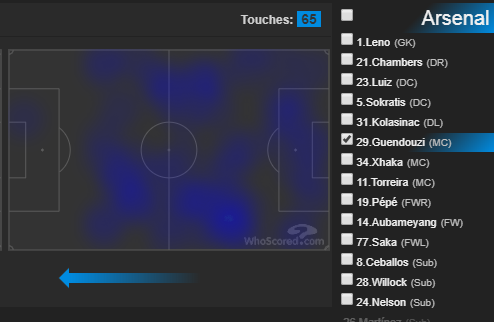 Arsenal looked more structurally sound at Old Trafford and we can see from Matteo Guendouzi’s movements that he played with less of a proclivity to move to the right-hand side, instead positioning himself alongside Xhaka in a more traditional double pivot. It yielded a more decipherable, if less exciting performance, but Nicolas Pepe suffered with the lack of companionship on the right.

Essentially, the second string has been better balanced, particularly in midfield, allowing the team to play to its strengths. While all the caveats about opposition and level of competition remain, the exciting thing for Arsenal fans is that this feels like evidence of a deep squad rather than a siphoning off of talent between the cups and the league.

In the past, League Cup sides packed with exciting youngsters have thrilled us, but their contribution has been very much limited to the lesser tournaments. In Arsene Wenger’s final season, the Europa League group stages were left to the likes of the soon to depart Wilshere, Giroud, Walcott, Debuchy, Coquelin and the raw talents of Nelson and Maitland-Niles at wing-back. Yet there was never any sense that any were seriously challenging for first team places, they were merely clocking in some minutes.

This season, Bukayo Saka and Gabriel Martinelli have successfully made cases for greater first team inclusion. Even with Lacazette injured, Emery has genuinely been spoiled for choice between Nelson, Saka and Martinelli and those players are even putting the place of record signing Nicolas Pepe under threat. Calum Chambers will surely push Sokratis and David Luiz for their spots once Bellerin is up to speed, as could Rob Holding once fully fit.

Joe Willock has demonstrated his mettle on many occasions this season, Emi Martinez looks a fine deputy goalkeeper and even Shkodran Mustafi has managed to dial down the opprobrium directed towards him. We should sound a note of caution, of course. Just over a decade ago, the likes of Bendtner, Vela, Song, Denilson and Djourou were regularly dicking on the likes of Wigan and Sheffield United in the League Cup.

This led to calls for greater inclusion in the first team and when the manager duly obliged the results were not as many of us expected. But now the gap does seem smaller between the cup team and the league team. The cup team does not look like a band of impressive, yet fragile kids, nor is it stuffed with experienced, yet underachieving squad players as it was in the latter Wenger years.