So, Arsene Wenger has a book coming out. ‘My life in red and white’ is due for publication in Autumn 2020, and chatting about it with James on the Arsecast Extra yesterday, I didn’t realise that all the clubs he’s managed play in some variation of red and white.

Nancy, Monaco, Grampus 8, and Arsenal. I mean, look at the Nancy badge, for goodness sake – how have I never seen this before? 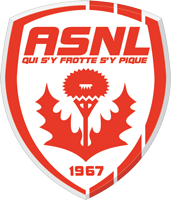 I think that might be an old badge (it’s the one on Wikipedia), the one on their website now is different, but their website address is asnl.net. [email protected] is how you got in touch with him back then. Anyway, I am very much looking forward to hearing what he has to say in this book, and I suspect it might well be a bit different from the usual football biography. A chronological trip down memory lane would be nice and all, but it doesn’t quite tally with who Wenger is and how he communicates.

The brilliant Dennis Bergkamp book, Stillness and Speed – written with David Winner – was a bit like this, so I’m hopeful we get something similar from Arsene. He’s already set the bar kinda high with that seminal L’Equipe interview, so as much as we all want to hear juicy stories about stuff, I reckon there’ll be more insight into Wenger’s philosophies and outlook on life and how that impacted his job and his work – particularly at Arsenal where he had that measure of control.

That said, there are certainly things I’d love him to cover, so in the absence of any real Arsenal news as this Interlull chugs along, here are some of those.

We’ve heard from the players about how they were a bit suspicious of a foreign manager coming from Japan to take over. “What does this Frenchman know about football? Does he even speak English properly?,” wondered Tony Adams. In time they came to embrace his methods, his ideas about diet, exercise, stretching, nutrition and all the rest, and they credit him with extending their careers and bringing them more medals and success.

I don’t think we’ve ever fully heard about what Arsene thought of them though. Was he shocked by the way they responded at first, and then later? He has talked about being surprised at how good they are, I wonder does he think they would have been capable of even more if they’d gone down that road earlier. And in general, as one of the very first foreign managers in English football, how did he cope with that, being viewed as an outsider in what was a very parochial environment back then?

Seeing off the big clubs

There was a time when Arsenal had four of the best players in the world in the team at the same time. Thierry Henry, Dennis Bergkamp, Patrick Vieira, Robert Pires: three of them testament to Wenger’s sharp eye for talent, and improving players. We know they were all, to one degree or another, coveted by the biggest teams in Europe. As much as we all love Arsenal, there are clubs with more profile, prestige and more money.

How difficult was it to see them off every summer? Vieira in particular was someone who flirted with transfers almost every year, it seemed, so how tough was it to convince them to stay? We paid them well, but the temptation of a Real Madrid and a massive pay increase is hard to understate. It’d be fascinating to get his side of this, and how much his man management skills played a role in keeping them for as long as we did.

The one that didn’t make it

Who was the young player he brought to the club or who came through the Academy that he thought was going to be a star, bit didn’t make the grade? Similarly, who was the signing he made that he had high hopes for but just didn’t produce?

This chapter could be titled ‘How Fran Merida and Stefan Malz broke my heart’.

Was it a message to the board? What exactly happened that summer? Is it true that one of the main players in the whole thing delayed the departure process by going on holidays right in the middle of negotiations? How on earth did a club like Arsenal end up in a situation like the one we were in at Old Trafford which ended up in that 8-2 spanking? Was the transfer trolley dash as last minute as it seemed? Did we really screw Mikel Arteta by offering to pay him less than he was at Everton at a point when there was no turning back for him if he really wanted to join?

Why?! Although it gave us that incredible video response to a Gunnerblog video, it remains one of the strangest deals I can ever remember Arsenal doing. He made just one Premier League appearance which lasted just 7 minutes, and considering we hijacked his move to Lille at the last minute to bring him to the club, it’s odd how little he played.

I’m as curious as anyone to know how exactly it all came to an end, but I think I’d be more interested in how his footballing approach changed. He was a manager wedded to a back four, but in those final seasons he used a back three to varying degrees of success. The FA Cup final in 2017 was a masterclass, but it did little to halt our dismal away form which ultimately led us to finish outside the top four for the first time in his reign.

Did he feel he’d lost the players/dressing room? Was he out of his comfort zone using a system he didn’t really believe in? It felt a bit desperate, particularly in the context of the criticism he was subjected to for the way we played, our form, our inability to address key issues on the pitch etc. This does feel like something he could be expansive about if he really wanted.

There are obviously loads of other things he could, and should cover, but there are just a few to provide some talking points this morning. Feel free to chime in on the arses with your own, and I’ll leave you this morning with yesterday’s brand new Arsecast Extra which will provide some respite from the Interlull. Enjoy.