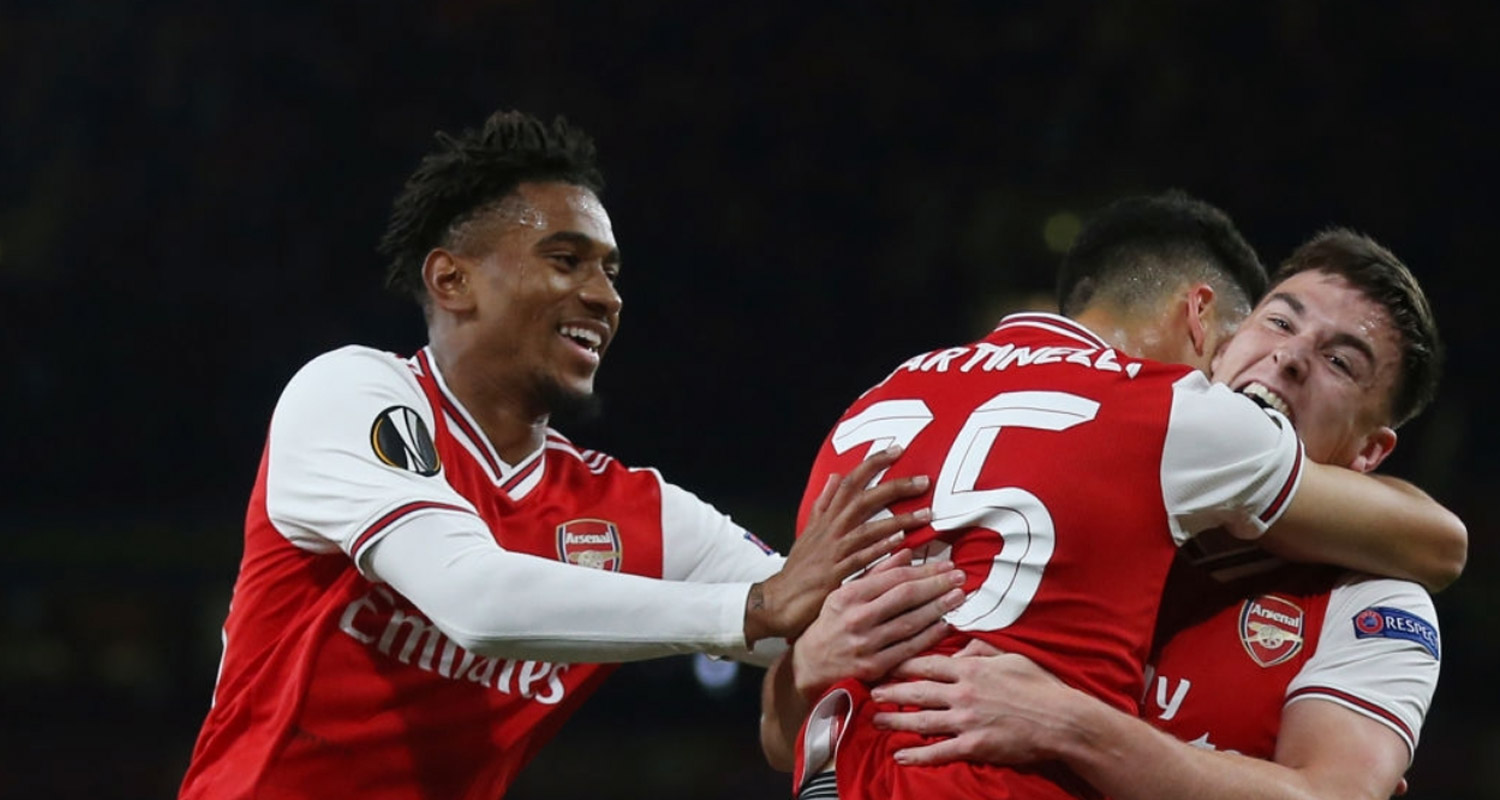 Apparently Gabriel Martinelli is not a centre forward. I say this only because I’m very excited about what he might bring to the team when he actually learns to play there. Another start at the Emirates, another two goals, and a 10 out of 10 performance from an 18 year still settling into life in England.

It wasn’t just the goals, it was the way he played throughout the 90 minutes with such drive and purpose, coupled with real intelligence and selflessness. His numbers stack up for impressive reading this morning, as collated by Scott for Arseblog News:

What I think impressed me most was how he scored his goals, the first in particular was so, so good. Look where he is when the brilliant Kieran Tierney (more on him anon) puts in the cross. You look at it and see the angle, the fact the defender is goal side, the keeper is covering the near post, and it looks practically impossible to score:

But with a flick of his neck, he thumps a header into the far corner, and you’re not not only admiring the quality of the goal, but wondering how on earth he did it. The physics involved are amazing. Judging the flight of the low cross, using the pace on the ball, heading it at exactly right the moment with the exact right part of his head. The speed of thought, movement and execution are top class. It’s as good a headed goal as you’ll ever see.

Two minutes later and he got his second, and again it’s speed of thought and quick feet which make it happen. The ball in from Nelson looked like it might get away from him for a second but he got it under control, moved it back onto his right foot and straight away – BANG – it’s in the far corner of the net. The defenders and goalkeeper just don’t even know how it’s happened, or how quickly.

I know we can be guilty sometimes of over-hyping young players, and I don’t mean to do that here, but there’s very clearly a level of natural talent here that’s tremendously exciting. We have four more Europa League group games, and an upcoming Carabao Cup tie with Liverpool, and I can’t wait to see more of him.

If we’re talking up the qualities of our young players, then Joe Willock’s uncanny ability to be in the right place at the right time in the opposition box is worth a mention. He missed a chance a few minutes earlier after a brilliant Tierney cross, but what I like about the young midfielder is that he doesn’t let it get him down. So, when the ball broke to him in the box, he took a touch and spanked it home to make it 3-0. That was his third of the season, and watching him again last night, the way that he drives the team forward with the ball, you think he’s got it all ahead of him if he can continue along this development path.

At that point, just 21 minutes in, you felt like the scoreline might go off the charts. In the end it didn’t, but nevertheless there were lots of things to enjoy despite the fact that Liege weren’t there to play but to carry out of a kind of damage limitation exercise. Dani Ceballos got his first Arsenal goal after superb work from Martinelli, and could have had a second from a ‘brilliant cross from Tierney’ – words I think I might be typing with some serious regularity this season.

So let’s talk about the full back and the kind of performance that makes you think £25m is an absolute bargain. Again, here are his numbers:

Beyond that, and it’s hard to explain a gut feeling, I looked at him and saw a player that belongs in that position in red and white. The way he plays is so positive, the quality of his crossing is like having a delicious cold drink after spending weeks drinking out of a puddle, and I love his character. Towards the end when Martinelli was chopped down, Tierney was having none of it, confronting the Standard Liege player.

What made that whole thing even better was the arrival on the scene of captain Hector Bellerin who got booked for his trouble. He suggested he was just coming over to speak to the referee about the foul on his young teammate, but what it demonstrated to me was something that’s been missing from this team too often in recent years – a willingness to stick up for one another in the face of opposition foul play. We’ve had flashes, but I loved that about both our full backs last night, and let’s not forget to take a moment to congratulate Bellerin on his first 90 minutes since the injury. I also really enjoyed his post-match interview with BT Sport in which he spoke with real intelligence, but pride about having the armband, his comeback, and leading the team to what was an excellent 4-0 win.

It almost feels bad not to mention the others. Emi Martinez was solid again; Mustafi and Holding weren’t particularly troubled at the back, but they did what they had to do perfectly, and the German’s beautiful long pass played a part in the first goal; Reiss Nelson perhaps tried a little too hard to impress at times, but that was probably his best game for the club; Maitland-Niles showed some nice touches playing further forward than usual; and in midfield Lucas Torreira sitting deep, along with the effervescent Dani Ceballos, ran the game.

It’s a shame Nicolas Pepe couldn’t get in on the scoring when he came on as a sub, and if you want to be super picky you might question the introduction of Pierre-Emerick Aubameyang with 10 minutes to go as unnecessarily risky given his importance to us in the Premier League, but there was thankfully no harm done there.

However, the night belonged to Martinelli, to Tierney, to Willock, and the rest of the players who started. Not only did they take their opportunities to impress, they played with the kind of confidence and verve that our ‘first team’ have rarely managed this season. I realise that the calibre of the opposition might play a part, so too the relative lack of pressure in this particular competition, but it illustrated we have players capable of producing more enjoyable football than we’re seeing in the Premier League. And therein lies Unai Emery’s challenge – I don’t think there’s any reason why a team with Aubameyang, Pepe, Guendouzi et al can’t go out and do that.

Having the two full backs fully fit will help – and be prepared for both to sit out Sunday as we continue to rightly and sensibly manage their comebacks from injury – but surely a significant part of it is the approach and making the players feel like they can play this way? At the very least these youngsters are demonstrating to the more senior players that they’re out to feature more, and perhaps that will provide some extra motivation. I do hope the manager can see that this kind of performance is more aligned with what we should be doing, and that he can overcome his cautiousness and release that most Arsenal of impediments: the goddam handbrake.

All in all, a thoroughly enjoyable night, and while the Europa League is far from my favourite tournament, these kids are making the group stage fun.

Podcast chums, James and I will be recording an Arsecast Extra this morning. As ever if you have questions or topics for discussion, send to @gunnerblog and @arseblog on Twitter with the hashtag #arsecastextra – or if you’re on Arseblog Member on Patreon, leave your question in the #arsecast-extra-questions channel on our Discord server.