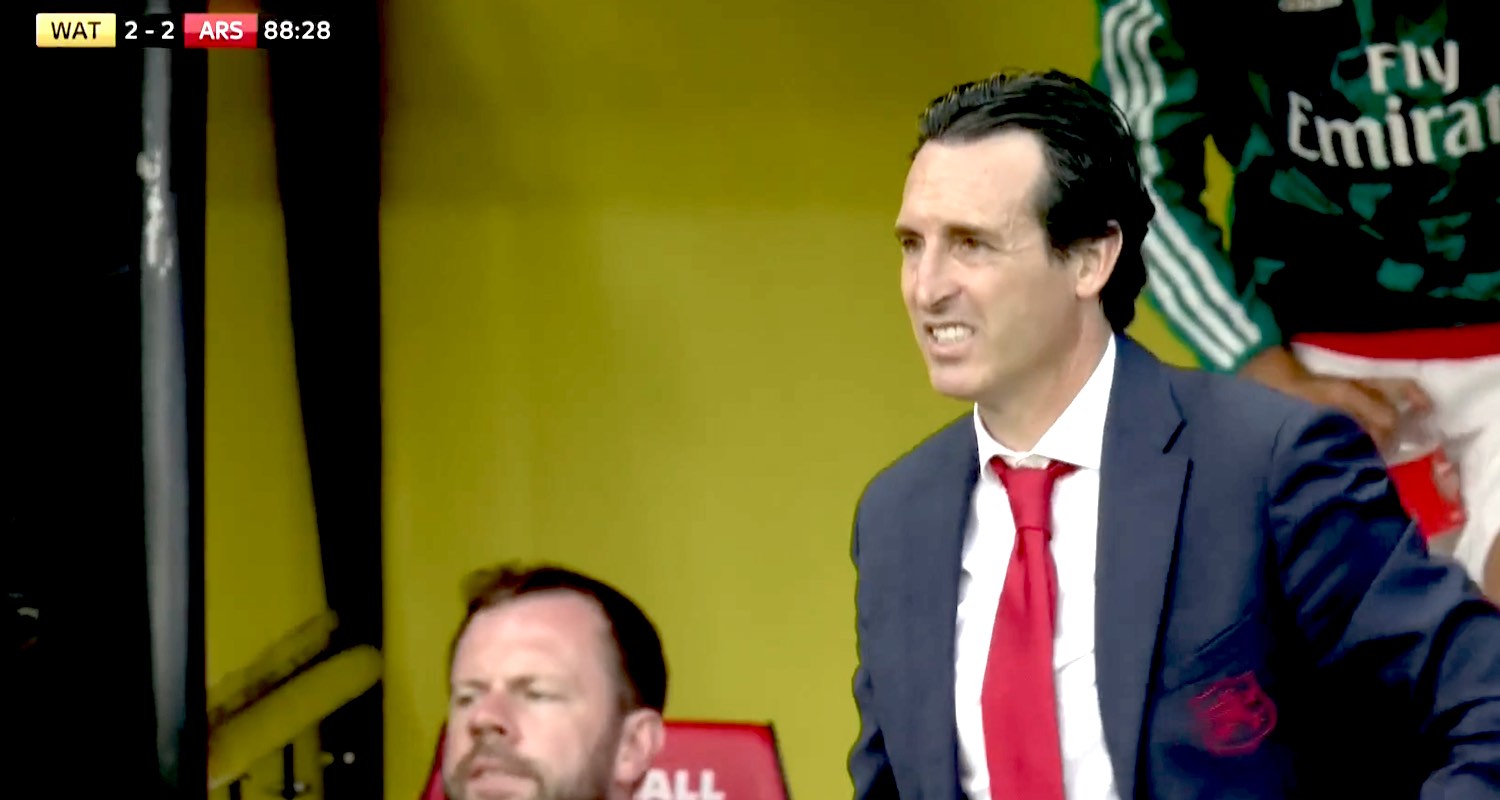 Although my mood this morning really doesn’t tally with this, I’m going to start today’s post with a positive. Thank the heavens for Pierre-Emerick Aubameyang, because I shudder to think where we’d be without him. His first half goals put us in a good position going into half-time.

The first was clinical, the kind of strike you see from a man who is super-confident and knows he’s at the very top of his game. Sead Kolasinac provided the pass, but the turn and finish was pure ruthlessness. His second came at the end of our best bit of football on the day, a good passing move which saw Mesut Ozil’s craft feed Ainsley Maitland-Niles, and his square ball was turned in by the striker whose movement is so good he could make a ballet dancer weep.

2-0 at half-time was healthy. I didn’t think we’d played particularly well, to be honest, but when you’re two goals to the good against the team bottom of the table who have only scored twice all season, you should expect to feel relatively comfortable. All you really need to do in the second half is play sensibly, don’t do anything stupid, and take advantage of their need to come forward by using your two very quick forwards.

Unfortunately, this Arsenal team is hard-wired to self-destruct. To shoot itself in the foot. Both feet. Over and over and over again. And that’s exactly what happened. A 54th minute goal kick was taken short from Leno to Sokratis. Maitland-Niles was on the right wing screaming for the ball. For some reason the Greek international looked to play it to Guendouzi on the edge of the box. He somehow didn’t see Gerard Deulofeu who intercepted it, and Tom Cleverly then blasted the ball beyond Leno and in.

There is no excusing Sokratis’ part in that, for which he later apologised. It was absurd for a player of his experience. Yet it felt like a mistake that was coming. Our insistence on short goal kicks every single time invited pressure, and we never looked comfortable. We’d almost been caught out in the first half when Guendouzi got robbed on the edge of our box, and the young Frenchman set the tone for the second half when, two minutes in, he played the ball across his own box straight to a Watford player. Over-confident? Careless? Arrogant? Whatever you want to call it, it put us under needless pressure, and from there we looked nervous.

Goals change games, as the saying goes, and there’s no question that this one had a profound effect on Arsenal. It put the shits up us. Granit Xhaka said afterwards that the team were ‘scared’, and he’s been roundly criticised for that admission. I can understand why, that’s your captain saying that, but was he wrong? I don’t think so. Look at that performance and tell me otherwise. For me, I think that’s Xhaka making a tacit criticism of the way the game was managed from the sideline, and probably of how this team is set up overall (more on that anon).

Watford’s tails were up. We needed to get on the ball and slow things down, add some control. So Emery’s decision to withdraw Dani Ceballos, remarkably because it was very hot, to put on 20 year old Joe Willock was odd. If you read regularly, you’ll know I’m a big fan of Willock, but he’s still very young and you could see how the ball retention skills of Ceballos would have been useful. Torreira replaced Guendouzi with the momentum well and truly with Watford, they were peppering our goal with shots, and then Emery threw on another kid, Reiss Nelson for Ozil. I felt for him and Willock, being thrust into that kind of situation is difficult, and I think the manager’s changes made it worse. What exactly were they being asked to do?

Almost everything Watford did came through Deulofeu, there seemed to be no instruction about how to stop him. A second goal felt inevitable given the pressure we were under, but to have it come from another mistake made it even worse. David Luiz conceding another penalty, dangling a leg out as the Watford player went past him. Stone cold. No question. No mistake with the finish, it was 2-2, and we were all over the place. If we were scared before, we looked absolutely petrified after.

We have Leno to thank that we took anything from the game at all, a late, great chance for Doucoure should have sealed the comeback for Watford, but thankfully the keeper anticipated the close range finish well and made the save look easy. Perhaps it wasn’t the most clinical finish, but let’s be clear about this: we were lucky to come away from Vicarage Road yesterday with a point having been 2-0 up. Again that was something Xhaka admitted afterwards, and again I think he’s right. I know he’s not the most popular player right now, but I’d rather his honesty after a game than some bland platitudes about how we need to work harder on the training ground.

So far this season – in just five games – we’ve allowed 96 shots on goal, more than any other team in the Premier League, Serie A, La Liga, the Bundesliga, or Ligue 1 (via @ollysailor). That is shockingly bad, and when you throw in the fact that since Unai Emery took over we’ve conceded 10 penalties, more than any other team, there are alarm bells going off all over the place for me.

People will point to individual mistakes and say that no manager can legislate for an experienced defender playing the ball to the opposition, or giving away penalties, and that’s true to an extent. However, if the way your team is set up invites pressure – and yesterday we were under relentless pressure from the team sitting bottom of the table – then that can manifest itself in individual errors. You know what else makes players do stupid things? A lack of organisation and understanding as to what exactly the manager wants from them, and looking at this team yesterday, that was my clear takeaway. The team was in panic mode, hence decision making is all over the place, and players who feel desperate do desperate things too often. It’s not to excuse Luiz but merely to try and explain why a player so experienced does something so daft.

The players are confused, because there’s no clarity of purpose in how we’re supposed to play the game. What are we trying to do? What kind of a team are we trying to be? What kind of football are we trying to play? We’re into Emery’s second season now, I’m still none the wiser, and I think that’s reflected in the performances. One of his key remits was to make this team better defensively, because under Arsene Wenger it had become comically bad. Are we better? No. Are we worse? Quite probably. Yes, I know, we’ve got Bellerin and Holding and Tierney to come in, and we all hope that they’ll be improve us, but do they address the fundamental issues of organisation and defensive discipline that run through this team? As good as we want them to be, I’m doubtful they can have that kind of impact.

For a manager so touted for his tactical approach, how often have we seen that have a positive effect on the way we play? Think hard about when the last time you saw what you might consider a complete performance from Arsenal? Valencia away, perhaps (even if that felt like more like the Auba and Laca show)? Sp*rs in the 4-2 last season when Emery’s half-time changes had a very positive outcome? Beyond that though, I struggle. I struggle to understand what we’re trying to do from game to game, and I think the constant chopping and changing of formations and systems prevents us building any kind of cohesion.

Yesterday, the game management, one of the things that gave people encouragement last season (oh, he’s not afraid to make half-time changes!), were a key contributor to the dropped points and the paucity of performance. He made things worse, and it could have proved even more costly. I just wonder where it is we’re trying to go under Emery. I can’t see progress, despite the fact he’s been hugely supported in the transfer window. Are we any better than last season in spite of jettisoning some of the players considered part of the problem? I know it’s just five games, and I realise a draw away from home is not the worst result in the world, but you have to look at the context too and consider the underlying stats which tell you things are as bad as they ever were defensively, if not worse, and nowhere near good enough offensively.

Sometimes a result feels more significant than it might look in isolation. A 1-1 away, fine. A 1-1 away against the bottom team who absolutely batter you for 45 minutes, during which you exacerbate and contribute to your own downfall, raises very serious questions about the team, but ultimately the man in charge. I think this is the kind of performance that should worry fans, but also the people in charge of running the football club. If Raul, Edu and Co aren’t making notes over this one, I’d be very, very surprised. It was that bad.

We have Europa League this week, and I worry a little that in order to make up for yesterday, we’ll go stronger than the competition merits with our team selection, but that’s something we can touch on during the week. The way to respond to this properly is next Sunday against Villa, but let’s see what midweek brings us.

Right, that’s it for now. For those of you wishing to relive this in audio format, James and I will be recording an Arsecast Extra this morning. As ever if you have questions or topics for discussion, send to @gunnerblog and @arseblog on Twitter with the hashtag #arsecastextra – or if you’re on Arseblog Member on Patreon, leave your question in the #arsecast-extra-questions channel on our Discord server.

We’ll have that available around lunchtime. Until then.