Home Arseblog, the arsenal blog Hector Bellerin: The Most Important Footballer In The World 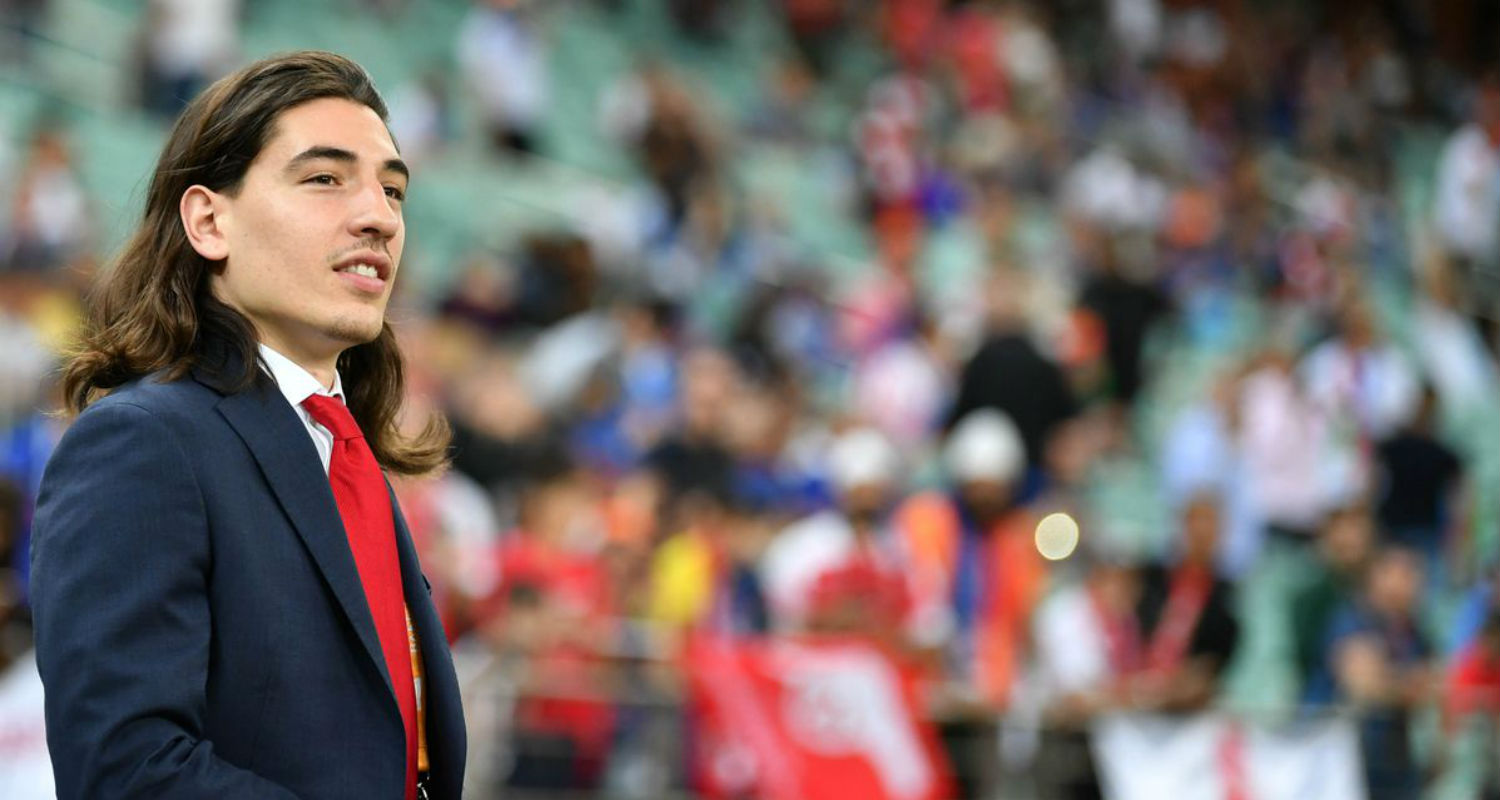 As you’re well aware, the Arseblog team are long-term fans of Hector Bellerin, so when Will Sharp of These Footy Times came to us with an article hailing the Spaniard as the answer to mankind’s many problems, we weren’t going to turn him away.

Grab a coffee, find a comfy chair and enjoy.

In some fusty and dated circles, to be good at football you must totally dedicate yourself to the game. And the game alone. Your personality should be bland, you should be socially mute and your appearance should not turn heads. To all intents and purposes, you should only be seen and heard on the pitch. After all, how can anybody give 110 per cent to their team in every game if their mind is clouded by god knows what?

Such a conservative and, frankly, embarrassing, take serves to cast Hector Bellerin – the fashion-designing, catwalk-treading, yoga-practising, Tesla-driving, gallery-going, vegan – as the embodiment of everything that’s wrong with modern football. In fact, he’s the opposite. He might even be the most important footballer on the planet.

On the pitch, he’s developed from ambitious La Masia inductee to Arsenal’s most intriguing import; from promising teen to first-choice right-back. But it’s away from the field of play that he’s really turned heads; the N5 fan favourite metamorphosing into one of football’s most nuanced and compassionate social commentators.

It was his unique love and subsequent application of fashion that first began to set Bellerín apart from his contemporaries. Unintentionally making himself a target for all manner of abuse and disdain, Bellerin forewent the typical tracksuits, trainers and caps in favour of more Bohemian garb. Staples among his footballing brethren; Nike, Adidas and Puma, were benched while brands such as Burberry, Givenchy and Prada came to the fore, as did clothes of his very own making, meticulously handcrafted in the same way he’d grown up watching his mother and grandmother craft theirs.

But, not unlike the way in which David Beckham, some 20 years before, became the source of much vitriol in response to his fashion choices, Bellerin was widely mocked. He was accused by many of wasting his talents and not paying sufficient attention to his career and, on social media, he was even subjected to sustained homophobic abuse. When his Arsenal form suffered a dip, the abuse would worsen. Eventually, Bellerin chose to delete his Twitter profile. Thankfully, he returned.

“When I first started using social media and people were talking about me, I used to take it a lot to heart. And then I realised that I was living more their life more than I was living mine,” Bellerin told BBC Football Daily. “And I said ‘you know what, let me just do me.’ Whatever. If I like clothes I like clothes.” This dismissal of his dissenters appeared to aid in unshackling Bellerin, freeing him to express himself in any way he pleased. This commitment to being himself soon developed far beyond merely his nonconformist choice of attire.

A steady stream of increasingly eloquent interviews has followed, each shedding new light on his interests beyond the pitch and, as Matthew Syed puts it, his “character and flamboyance”. In the process, intended or not, he’s been heralded as a poster boy for a variety of causes.

His switch to a vegan diet, driven by a desire to better help his body recover from the rigours of professional football, initially raised eyebrows but has since been followed by scores of others. A dedication to yoga and meditation likewise. Soon enough, Bellerin’s fashion experimentation started to earn admirers from those in the industry itself.

Before long, bitesize quotes and interview snippets no longer sufficed and Bellerin was invited, in 2018, to become the first footballer to speak at the Oxford Union, as one of the ‘People Who Shape Our World’. Before a sizable audience, he discussed an extensive array of topics including mental health, racism, Brexit, sustainable living and marketing. A long-form interview in The Times saw him further elaborate on many of the same talking points.

Revelling in his trailblazer status and growing in confidence, Bellerin started using social media for more than the usual post-game platitudes. During his recovery from ACL surgery, his candid vlogs have shed new light on the struggles players endure while unable to play. Despite being worn down by Twitter in the past, he now ignores the detractors to use the platform as a tool for positive social change.

In the aftermath of the Grenfell Tower tragedy, Bellerin promised to help those affected by donating £50 for every minute he played at the 2017 Under-21 European Championships. His eventual contribution, accompanied by pleas for others to do likewise, totalled more than £19,000.

This year he’s done his bit to raise awareness of the dangers of climate change by sharing a New York Times article detailing UN concerns about the world’s food supply to his 1.7 million followers on Twitter. It was a direct challenge to the US President’s dismissal of the issue.

He’s also shared a video highlighting the systemic abuse of animals on dairy farms, voiced his support for American women in their battle against the abortion bill, promoted equality for LGBTQ fans and disseminated a feature in the Players’ Tribune, written by the NBA’s Kyle Korver, that raised the issue of white privilege. “Listening and educating yourself on racism issues in society today is the best way we can make a difference,” wrote Bellerin.

Meanwhile, Bellerin hasn’t forgotten how to make a big difference on a small scale. In March 2018, having been charmed by a photograph of a small girl holding a homemade banner declaring her love for him from the terraces of Selhurst Park, the Spaniard again turned to social media for a hand in identifying his pint-size admirer. On finding her family, he liaised with them to organise a special treat to thank her for her support, which saw the defender travel to her home, spend an evening her family, and present both her and her brother with signed shirts.

“I’ve grown up and I’ve seen how people react to certain things that I say and that I do,” he told BBC Football Daily, in 2019. “Being able to influence people, is something that has really touched me and it’s made me feel more empowered and has made me feel that what I’m doing, somehow, can be a good thing. I’m just trying to—I don’t know—portray [footballers] as the humans we really are.”

And, of course, being a conscious human being in the year 2019 means being aware of the immense issues facing the planet we inhabit and genuine concern over its longevity. This is another topic of discussion that Bellerin has taken to educating himself on and spreading awareness of.

“I think if you have a bit of human in you, you should be disturbed by [the present state of the world]. I think us, as humans, we have a duty,” he told BBC Football Daily. “We all know how the planet is right now and I feel some responsibility, having the platform that I have, to kind of use it in a good way. Like, it’s nice to show what we have… but it’s good to also send a positive message that can be more meaningful.”

In his dismantling of so many stereotypes, and his unabashed willingness to air his opinions on contemporary issues, Bellerín is not just challenging what it means to be a high-profile footballer but society’s long-standing views on masculinity itself.

Football may not be the sport that most inherently encourages chauvinism and machismo but an aura of manliness, or the demand for manliness, endures. It takes no great leap to see how this ancient interpretation of masculinity underpins almost every conversation that culminates in players like Bellerin being derided for their off-pitch endeavours; the association being that a ‘real man’ would ‘get stuck in’, focus on the game. This is despite an unwillingness to open up—to talk and express one’s feelings—an evident contributor to the enduring endemic that sees suicide remain the single biggest killer of men aged under 45 in the UK.

For the youth of today especially, Bellerin’s efforts could prove invaluable. As the next generation grows up with their faces seemingly never more than a few inches from a touchscreen, seeking increasing influence from those presented before them, a reassuring, compassionate voice like Bellerin’s may never have been more necessary. In an age in which so much of the world appears irreversibly obsessed with vapid reality television and moronic celebrity culture, Bellerin’s is a voice of reason that needs to be heard in and out of football.

Bellerin has grown into an intelligent, principled individual with myriad interests that seem to be holding open the door to allow other players to express themselves creatively without expecting a furore or flurry of condemnation for daring to participate in something besides a game of football. But even more importantly, Bellerin has shown himself to be a genuine role-model with both a voice and a cause worth listening to. He is a responsible, vocal young man, not simply willing to use his fame for good but determined to.

In conversation with Vogue, early in 2019, the defender enthused: “I’m living my life the way I want to live it, and not the way people think I should.” Surely, we would each find ourselves inhabiting a far more accepting and compassionate world if more people lived their lives the way Bellerin chooses to live his.