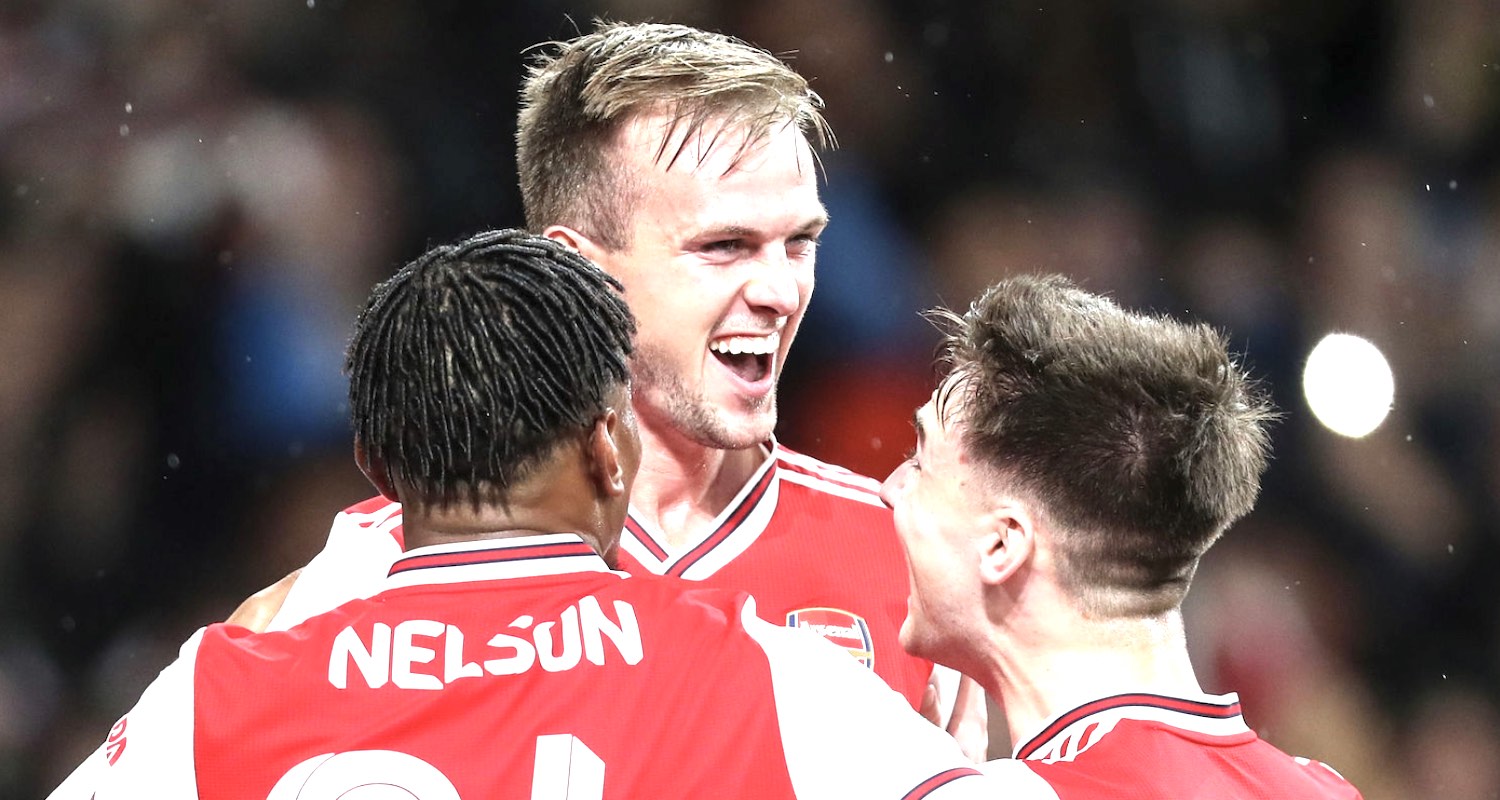 I had almost forgotten how much fun an Arsenal game could be. Sure, it was just the Carabao Cup, but let’s be honest, that’s part of why it was fun. Sending out the youngsters against lower league opposition has often produced nights like this down the years, and to see these burgeoning talents – bolstered by some experience and some very welcome comebacks – was far more enjoyable than watching some of the more familiar faces huff and puff their way through a Premier League match.

Rob Holding was back in the team after being sidelined for 293 days; Kieran Tierney made his Arsenal debut; we had Joe Willock, Emile Smith Rowe, and Reiss Nelson from the Academy; and up front a first start for summer signing Gabriel Martinelli. With the likes of Chambers, Mustafi, Ozil and Torreira fleshing it all out, it was a nicely rounded team who absolutely dominated the game against a surprisingly unadventurous Forest side.

Tierney immediately caught the eye with his powerful running down the left and deliveries into the box, while on the other side Calum Chambers is playing like a man who knows there are places up for grabs in this team. When you see Sokratis and David Luiz do what they’ve been doing, all you can do is go out and impress and hope the manager recognises that. His performance last night, after his goal against Villa, really should have Unai Emery thinking about his inclusion in the ‘first’ team.

Indeed, it was his beautifully controlled cross from a Nelson pass which saw Martinelli open the scoring with a smart header right into the top corner. The 18 year old has played most of his football on the left, but showed he’s got some penalty box instincts too. As a team we out-shot the opposition in the first half, and the best chance we had to double the lead fell late in the opening 45 to Smith Rowe whose header was sell saved. Unfortunately, he took a whack in the head in the process and was taken off with concussion, replaced by Bukayo Saka.

In the second period the game continued with the same kind of pattern, lots of Arsenal possession, and Willock should have made it 2-0 but headed a Saka cross wide at the far post. Before we then get to the flurry of goals, I guess we have to touch on Emery’s decision to take off Mesut Ozil. I can’t really understand why he did it. The game was opening up, the German looked like he was enjoying himself out there, and to say he looked displeased at the decision is understating it. Surely this was the perfect way of getting 90 minutes into him after playing so little this season, and it’s not as if Ceballos contributed significantly more.

Ozil had played 6 key passes on the night (the next best was Nelson with 4), and having made him captain for a League Cup game after so obviously snubbing him at the weekend against Villa, taking him off in those circumstances felt pointed. It’s like Emery is determined to make this whole thing an issue again, and there’s no real need for it. For me, at least, that was a little sore spot on the night, but what followed was both fun and heart-warming.

In the 71st minute Arsenal won a corner. Nelson curled it in, and having just been handed the captain’s armband by Ozil, Holding nodded home a goal on his long-awaited comeback. “I couldn’t have written it any better myself,” he said afterwards, and it felt like that strike opened the floodgates. Not before another change though, as Hector Bellerin came on to replace the impressive Tierney, and like Holding his comeback was marked with a tangible contribution.

After a corner was cleared, the Spaniard saw his shot blocked, but when Mustafi played a nice pass behind the defence he was alert, crossed it into the middle, and Willock was in the right place at the right time to make it 3-0. We all understand it can take players some time after a long injury to find their form and match sharpness, and that remains the case, but it will have helped to get an assist under his belt last night.

Bellerin’s introduction meant Chambers had switched to left back, and despite his manager’s instructions to sit back and support Saka, he paid no attention and continued to bomb forward to great effect. I know people have concerns about his pace, and maybe it was just me (or a slow Forest team) but he looked pretty zippy last night. Overlapping and receiving a pass from the young winger, he played a great ball which allowed Nelson to make it 4-0 and get off the mark as an Arsenal player.

Martinelli book-ended the scoring, picking up a pass from Chambers, taking it on and firing it into the top corner with a little help from a deflection, but I like to think it was going in anyway. What a home debut for the young Brazilian who did endure some of the physical aspects of English football on the night too. Nevertheless, he wasn’t in the least bit fazed, and to come away with two goals capped a fine performance for him and for the team.

Afterwards, Unai Emery was delighted to have Holding, Bellerin and Tierney back, and pleased with his team’s work overall:

I think this was a good match, a good result, a good game and with a clean sheet there are a lot of positive things. We can be positive with different options for the next matches.

Now, that’s kind of interesting. Does he mean the actual next matches, or the next matches in the Carabao Cup? Hopefully it’s the former, because our Premier League performances are telling Emery he’s got to do something different than pick the usual suspects. The young players last night, and some of those on the fringes are telling him they’re worthy of a chance too. In the same way he rewarded Saka’s display against Frankfurt, some of the guys who played last night are worthy of serious consideration against Manchester United at Old Trafford next week. Will he be brave enough to do it? We’ll find out on Monday, I guess.

In the meantime we can enjoy what was a fun night, a good performance, and an enjoyable win. The positives in seeing those young players take their opportunities were augmented by the returns of Bellerin and Holding, and the fact we saw Tierney in red and white for the first time. I don’t think that trio can realistically be expected to solve all our defensive problems but I don’t think it’s unreasonable to suggest they could definitely help make things a bit better. We do have to be careful, and the temptation to play them week in week out has to be tempered by common sense, but it’s great to see them back because they make the squad stronger.

Right, we’ll have more reaction and news throughout the day on Arseblog News, more from me here tomorrow. Until then.