Home Arseblog, the arsenal blog Arsenal 2-1 Burnley: Midfield drive the performance as the strikers win the... 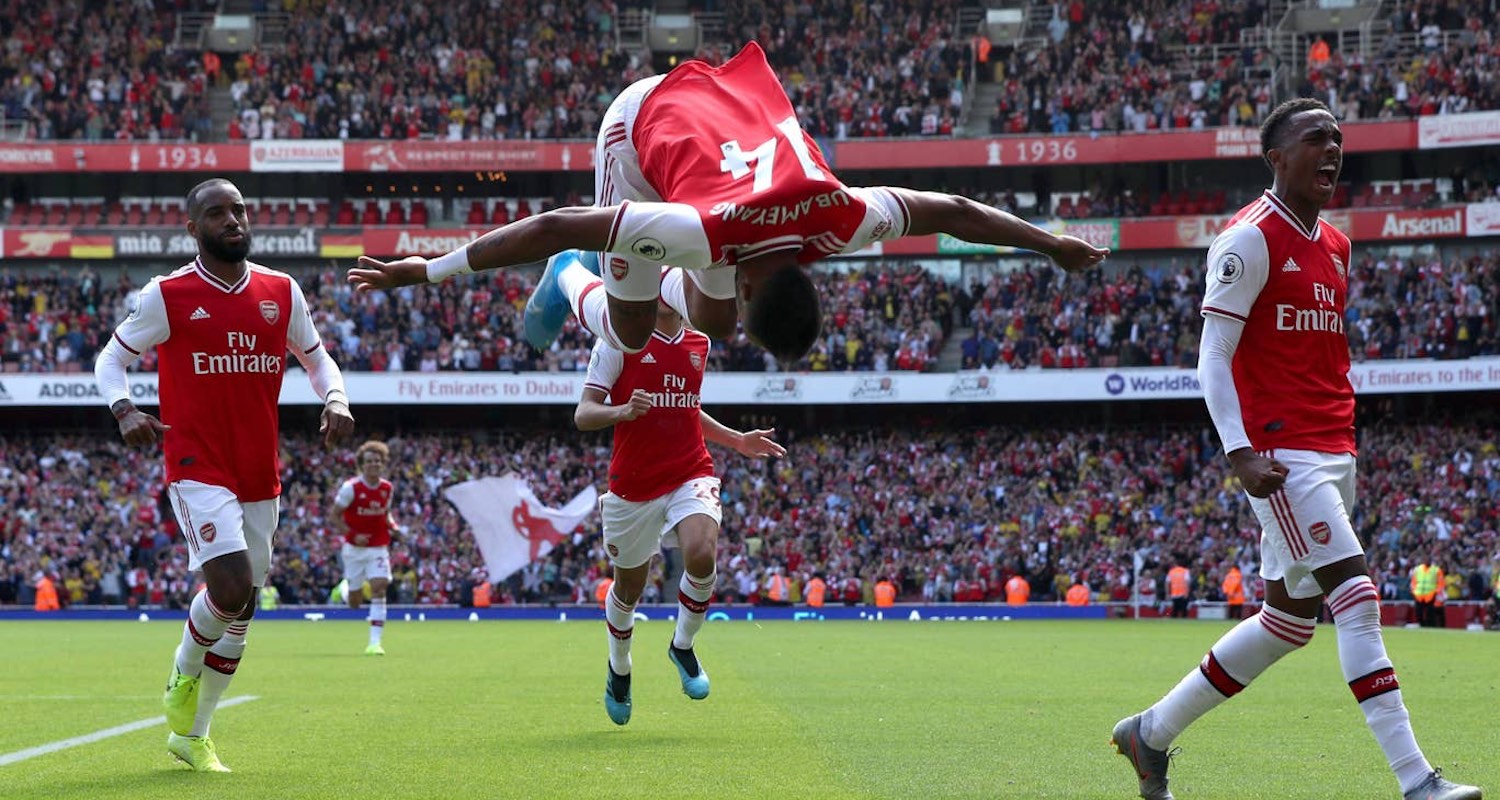 Yesterday’s win over Burnley was one of those games which makes me remember all the stuff I like about football. Was it a classic performance from Arsenal? Far from it. There were more positives than negatives, for sure, but also moments where we were under pressure and looking a bit wobbly.

In the end though, we had three outstanding midfield performances; a goal apiece for our two top class strikers; a moment of genuine hilarity right at the end; and an opposition manager absolutely losing his shit over something only he saw. It’s either that Sean Dyche has powers of perception than none of us possess, or he’s making stuff up to deflect from yet another defeat against Arsenal? I wonder which one it could be.

Without Granit Xhaka or Mesut Ozil, Emery started a midfield trio of Matteo Guendouzi, Joe Willock and Dani Ceballos, with Reiss Nelson up top with Aubameyang and Lacazette. David Luiz came in for his debut at the back, and seemed determined to stick to the plan. The plan, according to the Brazilian, is to play it out from the back, and his determination to do that was evident in one fizzing ball across his own goalmouth in the 4th minute. It’s definitely not out of any coaching manual, but it illustrated his ability and his confidence.

Ahead of him Ceballos started as he meant to go on. Leading the Burnley midfield on a merry dance. A shimmy here, a waggle of the hips there, a dash of salsa everywhere else, and they couldn’t get near him except to foul him. Which they did. Often. Fouling, just to make the point quite clear, is against the rules.

The Spaniard ended up with two assists on the day, but in truth the strikers had a lot to do in both cases. For the first, his corner fell to Lacazette in the box, and despite the close attention of a number of Burnley defenders, he did his utmost to stay on his feet. On the turn, and despite falling due to the Burnley defenders hanging out of him, he lashed the ball between the keeper’s legs to make it 1-0.

I loved Ceballos’ part in the second though. His attempted cross-field pass was blocked, but immediately he sparked back into life, nicking the ball back from the opposition which gave Aubameyang the chance to pick it up and surge towards the box. This was one of those goals that he made look so simple and effortless you wonder why he doesn’t just do it five times a game. He powered at the defence, produced a little shimmy to step outside the defender, and then a perfectly executed finish into the bottom corner. It’s not simple, of course, it’s just that when he’s in full flight he has the talent to pull stuff like off with such aplomb it looks that way.

Our midfield, made up of a 19 year old making his first Premier League start at the Emirates; an on-loan 23 year old making his first Premier League start; and a 20 year old in just his second season in English football, were a joy to watch. The variation of qualities was really interesting. I don’t want to over-hype Willock in any way, but there are shades of Vieira in terms of how he plays. He pops up all over the pitch, and his ability to burst forward and make something happen is aided by a deceptive, long-legged turn of pace. Late on he created a great chance for Torreira with exactly that kind of thing.

Guendouzi still has things to learn, but his performance on the ball was controlled and precise, and he too looked to drive the team forward. I don’t think there’s any doubt that Ceballos was man of the match. His ability on the ball was obvious, his work-rate off it was just as good and he ran further than any other player on the day, which tells you plenty. The standing ovation he got when he came off was well deserved, but let’s not overlook the role his midfield partners played in giving him a platform to play the way he did. It felt like a bit of a glimpse into the future, into what our midfield could look like, and it was really very encouraging.

Of course Burnley did score a goal themselves. It was careless from Arsenal who had been a bit sloppy at times in the first half. We didn’t look entirely comfortable when they had set-pieces and free kicks, lumping the ball towards their collection of blokes who look like slightly too large farm-hands who you wouldn’t let drive a tractor (well, not since the last time when they kinda ran over that dog. And by dog I mean child. And kinda I mean repeatedly). In goal Leno’s abilities as a shot-stopper were in evidence, but he was a touch unconvincing under the high ball. It’s not easy against a team like that though.

What I did like, however, was the fact that David Luiz was constantly talking – urging his teammates to stay focused and concentrated. To my mind, at least, that’s something we’ve been missing at the back. He looks like a proper organiser, and if that can help mould our collection of individuals into something of a more cohesive unit then I’m all for it. His insistence post-game that Arsenal can improve was great to hear as well. There’s no pussyfooting around with this man.

What else? Well, Nicolas Pepe was introduced at half-time and we saw some of what he’s about. His movement and quality on the ball was obvious. That nutmeg in midfield which drained the very life force from his opponent was absolutely glorious, but there’s still a lack of sharpness when it comes the final decision. Late on he should have had his first assist, but under-hit a pass to Aubameyang when we had a two on one break deep in the Burnley half. That will come though, he just needs a few more games to get himself fully up to speed.

I won’t lie, our inability to take that chance left me worried. Particularly as I could see any number of ways in which Burnley lumped the ball into our box and one of their concrete-headed lummoxes smashed in a late equaliser. However, I didn’t reckon for the outright dimwittedness of Ashley Barnes. Having spent the game crashing around like Lennie from Of Mice and Men, he actually sabotaged his own team as they came forward looking to create one last chance.

Instead of just running into our box to try and get on the end of a cross, he couldn’t resist fouling Kolasinac as he ran past him. It was the football equivalent of punching yourself in the mouth as you try and pick your nose. Mike Dean actually saw it and gave a free kick, much to the displeasure of the Burnley forward, but also much to my amusement. What a dope.

I can only assume it was that which sparked Sean Dyche’s post match rant in which he claimed to be concerned for the state of the game. “I’m really worried about the game of football.” he said. “The people falling on the floor and diving all over the place today – it’s got to go.”

He claimed it wasn’t to do specifically with Arsenal, but of course we know that’s nonsense. Sure, diving is awful, none of us like it, but I genuinely have no idea what he saw yesterday that made him so antsy. One might even say that a team whose approach is overtly physical, which makes lots of fouls, and gets away with lots of stuff because it epitomises qualities which are still generally lionised in the English game might also have a negative impact on football.

Don’t get me wrong, I love physicality, and I love an Arsenal team that is strong and up for the fight, but Burnley play on the edge. It’s part of what they feel they have to do, and that’s fine. But don’t be a big crybaby when it doesn’t work, and accept the fact that if you clatter into a bloke with a gigantic knee in the small of his back right in front of the referee, that bloke is going to need a bit of treatment while your player gets away without even a booking. Anyway, the point is Sean Dyche was FUMING, with his head like an angry testicle, and that made me more happy about our win.

So overall, an enjoyable afternoon’s work. Of course there are things we can do better, and things we should do better when the team beds into the season properly. In the meantime though, results are far more important than performances, particularly when you look at the next two games on our schedule. It was crucial that we got a couple of wins under our belt before the trip to Anfield, and the derby, and we’ve done that.

James and I will discuss the game in more detail on tomorrow’s Arsecast Extra, so please join us for that. Until then, have a great Sunday, and try not to worry too much about the game of football. You’ll give yourself an ulcer.