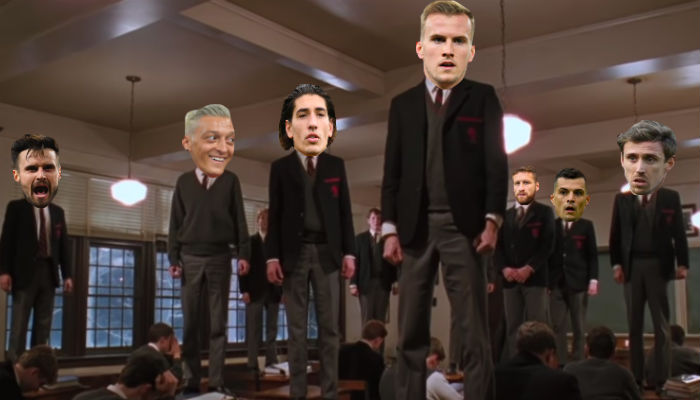 Coffee, when you wake up, is good. Coffee, just before you go to bed, is bad. For some reason, I got it into my head last night that an espresso poured over vanilla ice cream would be an excellent dessert choice and that imbibing a shot of joe in this form would dampen its potency. It turns out I was very wrong.

I’ve spent much of the night staring at the ceiling thinking about weird, random stuff. Like, who did Mesut send to buy peroxide so he could bleach his hair? Did he buy it himself and then spend an hour in his hotel room carefully applying it? Maybe he went to a hair salon and had it done professionally? If so, why didn’t he take Raul Sanllehi with him for a trim? Also, if Shkodran Mustafi and Sead Kolasinac also lost the bet, why are they still sporting regulation follicles? What other bets are going on in the changing room? Surely Unai isn’t involved? Is he making Granit Xhaka captain because he lost a bet? Surely the Swiss isn’t the right man to inherit Per Mertesacker’s fine jar? Or maybe he is, there are loads of banks in Switzerland, aren’t there?

It went on like this. There were lots of questions and very few answers. And then the alarm went off and here we are. Naturally, I’m now drinking coffee again to perk me up.

*Shakes fist at the evil brilliance of the caffeine gods*

I should probably get out of the habit of reading about Arsenal just before bed. I think it was late landing quotes from Emery about the soon-to-be-vacant club captaincy that got me into such a weird train of thought.

Despite it precipitating an exodus, it sounds as though the Spaniard is again going to ask several players to share the leadership responsibilities. I think at this point we can all accept that even if Laurent Koscielny performed a miraculous u-turn, it’s impossible for him to retain the armband.

Having led the team out against Bayern the other night, the smart money is on Xhaka to take over. But if it was put to a vote, Nacho Monreal would get mine. I know he’s not got long on his contract – 12 months and a Cazorla-style clause to keep him for another season after that – but he looks like he has gravitas in the dressing-room.

When he arrived he struck me as quite shy, but I think it was just a case of not knowing the language. As soon as he picked up English he became very vocal on the pitch. I guess the major drawback is whether he’ll even be in the side regularly this season. If we sign Kieran Tierney and want to play a back four, he might struggle for minutes.

Interestingly, Emery wants an English voice to take a lead role too. Unless he’s been impressed by one of our teenagers, that leaves Rob Holding, Calum Chambers, Ainsley Maitland-Niles, Carl Jenkinson or Stepney-born ‘ector Bellerin.

The Spaniard said: “Last year [Granit] Xhaka, Mesut [Ozil] and Nacho [Monreal] were working as captains. But after Aaron Ramsey and Petr Cech left – and possibly Laurent Koscielny – I will want more.

“An English player who grew up in our academy can understand the English spirit and Arsenal values. These are the qualities and more [we want].”

Can you imagine Carl getting the gig? That would be some turnaround.

Football.London’s James Benge reckons 23-year-old Rob Holding, who is set to return to action a month earlier than expected, is a serious candidate for the vice-captaincy. I’d be fine with that, so long as he can cope with the pressure of being a leader at the same time as winning back his place after a long spell on the sidelines. I thought it was interesting Holding also got backing from Jack Wilshere recently.

One young defender who doesn’t seem to have a future at Arsenal is Krystian Bielik. The Pole, who wasn’t included in our US Tour squad, wants to play first team football next season and it’s reported that a number of England’s second-tier sides want a piece of him. He did well at Charlton last season and impressed for his country at the under-21 European Championships this summer but for whatever reason, it looks as though Unai Emery doesn’t fancy him. He’s under contract until 2021 so we could probably get a half-decent price for him from someone. Definitely one to watch on the transfer front in the next few weeks.

Elsewhere, Sven ‘Diamond Eye’ Mislintat has been talking about why he decided to leave Arsenal in February. In an interview with 11Freunde, the best bits of which have been kindly translated for us by @LGAmbrose, he mentions the club’s recruitment policy being increasingly reliant on agent contacts.

He said: “Previously we had a strong systematic approach to transfers, a mixture of watching things live as well as quality data and video analysis – Arsenal actually owns their own data company.

“That meant that we acted independently, we knew about all markets and players in all positions that came into question. However, the new leadership work more strongly with what they are offered from clubs or agents through their own networks.”

The Denis Suarez deal would appear to fall into that latter category and it looks like we’ve already recruited Gabriel Martinelli thanks to Edu’s background in South America. There are also strong suggestions we’re pursuing Brazil international Everton Soares via similar means.

For what it’s worth, I don’t think we’re suddenly going to make all our decisions based on Raul and Edu’s contact book. By most accounts, StatDNA, owned by Arsenal and run by Jaeson Rosenfeld, continues to grow in influence at the Emirates. Also, is leaning on contacts a bad thing? Sven himself landed us Aubameyang and Sokratis from Dortmund in this way. I guess we’ll just have to see how it plays out over the next few transfer windows. I can’t be bothered to reach for the pitchfork this morning.

Before I go, I want to point you in the direction of a few bits and bobs. First, for those of you who aren’t aware, Blogs has been writing a US tour diary for our Patreon members. I don’t want to play down how exciting it is, but the highlights have definitely been his interactions with Stateside Uber/Lyft drivers. If you sign up, you get this excellent content straight to your inbox. Seriously, it’s most enjoyable. Also, all the Patreon money goes on improving the Arseblog infrastructure and providing broader coverage of this ridiculous football club we’ve all fallen for.

Second, the very cool guys behind MUNDIAL magazine have produced, with a helping hand from the always lovely @DJTayo, a brilliant podcast series called GIANT which is available on Spotify. Their latest episode is all about the rivalry between Arsenal and Manchester United during the nineties and noughties. It’s by fans for fans. And it’s great. You have to listen. You’ll recognise quite a few of the voices.

Next, as you well know, we’re slap-bang in the middle of ‘silly season’ meaning Arsenal could be linked with Sebastien Frey and/or Hatem Trabelsi at any given moment. But what if you ignore all the transfer window fluff and nonsense and try to analyse what our club really needs? That’s what the guys at @TifoFootball_ attempt in this great video. It’s jam-packed full of stats and includes a tremendous illustration of Unai Emery with a clipboard.

Finally, an Irishman and I have been doing a podcast for a few weeks called Left Field. The sound quality isn’t amazing, but (once you’ve listened to GIANT) we’d love you to lend us your ears for 45 minutes or so. We’re doing it because we like chatting about football, but also other sports. If you think it’s a bit shit, let us know. If you have ideas about how it could improve, tell us. If you like it, tell your friends.

Right, I’m done. Tom will be on duty here over the weekend and I’ll be back on Monday. Catch you on the other side.