Koscielny is in the wrong, and Arsenal have a real mess on their hands

There’s only one place to start this morning and that’s the Laurent Koscielny situation. Yesterday, the club released a statement revealing that the captain had refused to go on the US tour. It read:

Laurent Koscielny has refused to travel to the US for our pre-season tour. We are very disappointed by Laurent’s actions, which are against our clear instructions.

We hope to resolve this matter and will not be providing any further comment at this time.

The first thing to say is that there is simply no condoning that behaviour from any player, and certainly not the captain who has a greater responsibility because of his role. Whether you see your future at Arsenal or not, as long as you’re a player being very well paid, you have to fulfill your duties and Koscielny has not done that. It’s unprofessional and it’s wrong, no two ways about it.

However, I do think we need to consider why it has come to this. Why has somebody who has given us nine years of service, through thick and thin, and put his body on the line for us, decided that this course of action is the way to go? He’s not an agitator, he’s not somebody who causes a fuss, and he will be acutely aware of his role as captain of the club and the responsibilities that come with that honour. So why has he done what he’s done?

On today’s Arsecast, I chat with David Ornstein a bit about this, and there are some factors in play. First and foremost is Koscielny’s desire to leave and go back to France. Last year he was planning his departure to coincide with that of Arsene Wenger, but after picking up that Achilles injury in Madrid that became impossible. Anyone who watched the video of his rehab and recuperation from that injury will understand how hard he worked to come back, and after a few iffy games he found his form again and was our best central defender last season.

That’s another factor: concerns about his playing schedule. His tendonitis is still an issue, and there were times when he was pressed to play when he felt he shouldn’t. For example, after Shkodran Mustafi’s disasterclass against Crystal Palace, the plan to rest Koscielny against Wolves went out the window, and he had to play three games in six days. Which is fine if you’re a 25 year old, but at 33 off the back off a brutal injury it’s too much and high risk.

Then there’s a suggestion that Koscielny believed there to be a clause in his contract which allowed him to leave from free this summer. I’m not sure about this one, because back in January 2017 he Tweeted this: 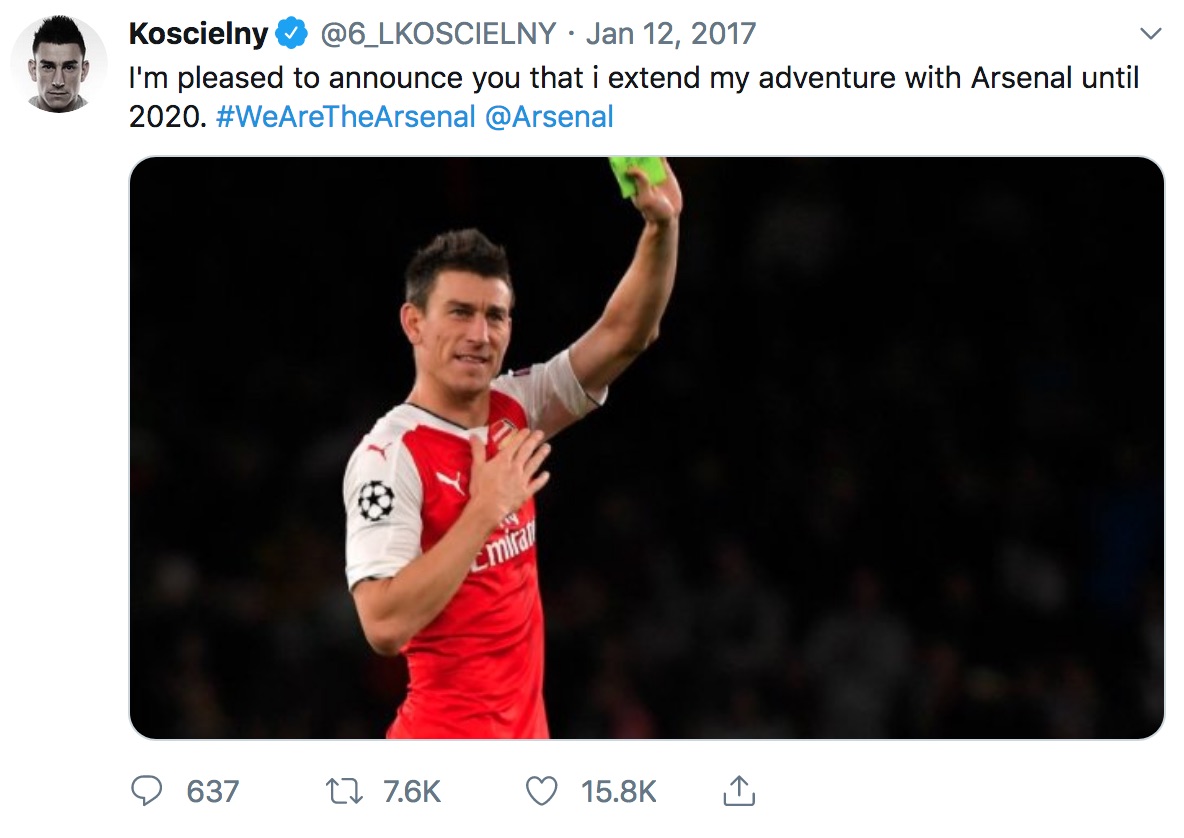 So, he can’t really have thought we’d let him go for free this summer. What makes a bit more sense is him being unhappy at the amount we’re looking for in the market. I saw a report suggesting we’re seeking something in the region of £10m, and while I think it’s important we maximise our income this summer and we certainly have no obligation to let him go for free, you could understand why Koscielny might think that’s prohibitive to his chances of moving back to a smaller French club. We’ve just let a hugely experienced, 30 year old, fully fit, international goalkeeper move to Italy’s runners-up for something in the region of €4m, so to look for £10m for a player who turns 34 in September and who looked physically banjaxed last season might well have caused a serious problem.

Even so, I feel like there’s more to this story than we know right now. For a player of his experience, and in his position, to do what he’s done suggests there’s been a complete and utter breakdown between him and the club. None of the issues above are insurmountable or in any way unusual in the day to day goings on at football clubs. They are things which could have been sorted while he was on the tour, and there would have been no need for this furore, but he obviously felt like he had to go down the road he did.

Arsenal’s statement has divided opinion. For some it provides an openness and transparency which hasn’t always been our forte. For other its washing our dirty laundry in public. I do wonder about it, maybe it could have been kept in-house and the situation dealt with a bit more quietly, but they made their decision and its very much out in the open now.

In truth, nobody comes out of this smelling of roses. Koscielny is wrong, no question about it, but just four weeks out from the start of the season it doesn’t reflect well on the people running the club that the captain has behaved this way. I think it tells us something about what he thinks of our direction and this current set-up. Again, that’s not making any kind of excuse for Koscielny, the criticism for him is completely justified, but when a player of his experience decides to do what he did, it’s not an impulsive decision. It’s the action of a man at the end of his tether, and to me that’s really worrying.

It also leaves us with a bit of a mess at centre-half, an area we already needed to strengthen this summer. Koscielny’s position is now surely untenable, and it’s hard to see how he can continue with the club. Rob Holding isn’t going to be fully fit for a while after his cruciate injury; Shkodran Mustafi is a player we desperately want to get rid of; Dinos Mavropanos is not, according to David on the podcast, considered a ‘credible option’ at this moment in time; we’ve offered Calum Chambers to Crystal Palace to try and get the Zaha deal done, which tells you what we think of him; while there are reports that Krystian Bielik has been told Emery has no role for him next season. Perhaps that might change in the wake of this situation, but in essence it leaves us with 31 year old Sokratis as the only central defender we actively want who is ready to start the season. I think it also tells you plenty about the state of our squad that a 33 year old Koscielny, with his physical problems, is so important to us.

What a mess. On top of a summer during which we’ve done almost nothing to improve the squad or move on some of the players we no longer want, we now have a very public falling out between the captain and the club, and the ramifications for all concerned are really serious. This doesn’t feel like we’re in a healthy position, or a particularly well run outfit right now. Raul Sanllehi’s ‘very good plan’ doesn’t seem to be that good at this moment in time.

Ultimately, for me at least, this is a really sad situation. For someone who has given us great service – with ups and downs like most players – to make his departure as difficult and contentious as possible, is really unfortunate. To feel that he has to behave in this way, that he’s been pushed into the most unprofessional action a player can take – to essentially go on strike – speaks volumes about what’s going on at Arsenal right now.

Absolutely be critical of Koscielny, he deserves it, but don’t think this is some prima donna throwing his toys out of the pram for no good reason, because that would be blinding yourself to the bigger issues at play here.

Before I get to the Arsecast, just a reminder that I’m away now for a couple of weeks. I’m heading to LA later today, and will be covering the Arsenal tour in detail for Arseblog News. Andrew Allen and Tom are going to keep things going here on the blog, and while time zones etc will make things a little funny, the podcast schedule will continue as normally as possible while I’m on the road.

For more from the tour, behind the scenes stuff and general observations, you can follow my tour diary over on Patreon. If you’re not a member, it costs just €5 per month, and throughout the 10 days or so I’ll be writing, doing some extra short podcasts and maybe a bit of video stuff too. You can sign up at patreon.com/arseblog

For those in LA or heading to LA, we’re doing a live podcast on Sunday at the Underground in Hermosa Beach. For more info and for tickets, click here.

I’m looking forward to catching up with lots of US Gooners while I’m over there, so for now I’ll bid you farewell, and leave you in the capable hands of Tom and Andrew. The brand new podcast is below, listen/subscribe/share and all that, and I’ll catch you soon.