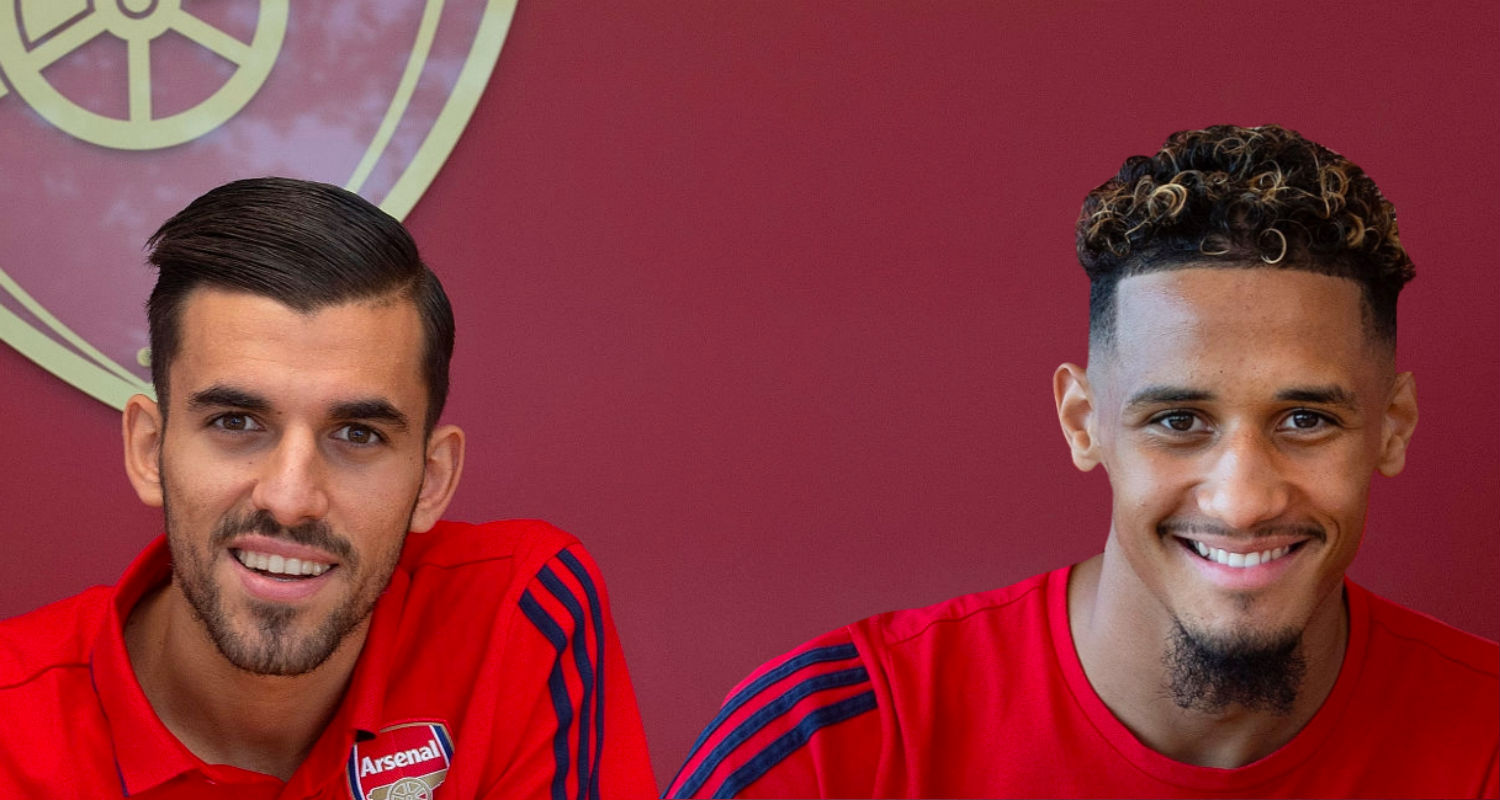 Just before 3pm, the club confirmed that Real Madrid’s Dani Ceballos had agreed to a season-long loan deal. A couple of hours later 18-year-old defender William Saliba outlined why he had decided to become a Gunner rather than join Sp*rs.

The former represents an exciting short-term opportunity to fill the gap left by Aaron Ramsey. The latter, who will spend another year in France after we agreed to loan him back to Saint-Etienne, has the potential to be a long-term solution to a position that has caused us no end of headaches in recent seasons.

Putting pen-to-paper on the same day but unlikely to ever play together, their paired ‘arrivals’ underline how in limbo we are right now.

Unai Emery can’t shift the high-earners he wants out of his squad because nobody will buy them, so he, Raul and Edu are trying to assemble a squad that can get us back in the Champions League inside 12 months without breaking the bank. If reports are to be believed, we have around £40 million to play with this summer. A few years ago, that figure was the stuff of dreams, but in this inflated market it gets you two Danny Ings.

On the other hand, we’re looking to the future. If we do get back in the Champions League, we need to stay there, which means having a pool of talent who are capable of stepping up. Right now, we can’t afford designer label signings, so we’re trying to stay ahead of the curve and pick up the brands that might become cool in the future. Gabriel Martinelli, like Saliba, fits this mould.

I’m guessing this is what Raul Sanllehi meant in May when he spoke about the need to ‘outsmart the market’.

Of course, It’s not all about incomings. We’re also going to need to turn a healthy profit or return on those we shuffle to the exit, something we all know we can improve upon.

It’s not rocket science. Nor is it easy. Just to make clear, I certainly don’t pity them. Raul, Edu and those around them have an amazing opportunity to make an indelible mark on our great club; to write a new chapter; to restore us to where we want to be. If they are good at their jobs, it will happen. And that’s whether they get a helping hand from the Kroenke family or not.

For what it’s worth, I’m excited by yesterday’s business. So let’s talk about the new boys.

Unlike Denis Suarez, who came and went in the blink of an eye, there seems to be consensus both within the club and from those who keep a close eye on Spanish football that Ceballos is a serious talent. Barcelona were desperate to get rid of Suarez, Real Madrid are adamant that Ceballos has a future at the Bernabeu. And so too is the player.

In a video used to mark his arrival, the 22-year-old says: “In Spain, we believe footballers are artists, but you don’t need me to tell you that. Our football is full of life, colour, tempo and passion. This season, Arsenal is my canvas. And I want to create something special.”

After starring in two consecutive Under-21 European Championships and earning senior caps despite not playing regularly for Real, you could say, he’s taking a risk switching country and culture with Euro 2020 on the horizon. However, he seems positive that he’ll cope with life in England (it’s not always this hot, mate) and the rigours of the Premier League.

“It’s a very tactical league but it’s also physical,” he told Arsenal.com. “I’ll need to adapt to the team but I can’t wait to get started.”

So what will Ceballos bring to the team? Versatility, creativity, good feet. I hope. And competition for Alex Iwobi, Mesut Ozil and Henrikh Mkhitaryan, all three of whom are prone to underperforming.

“He is a conventional No 10, with supreme vision and technique…a player who simply loves to play, a joy he probably lost at Real over the past 18 months,” says Joseph Cassinelli in The Times (£).

“As someone who can play as advanced as a No.10 or as deep as a No.8, he will freshen up an area of pitch that needs something new,” offers Harry de Cosemo for Football 365.

In last night’s annual supporters’ clubs Q & A, Sanllehi also revealed: “He is fanatical about football. I can tell you that for the last two weeks he has been studying Arsenal and every player and this was part of why we brought him in. He is a loan player but he has a big commitment.”

Without wanting to heap pressure on him, it sounds like he has qualities akin to Santi Cazorla, a player we’ve missed terribly.

And it’s not just going forward that he’ll bring a new dimension. Scott Willis, writing for Arseblog News, has crunched Ceballos’ numbers and has positive things to say about his defensive output too. He writes, our new man can “play in a midfield two and not be a defensive liability while also perhaps fill the ‘pressing 10’ role that Emery has shown that he would prefer.”

Reports claim we’re paying Madrid around €4 million for Ceballos’ services. It would be lovely to look back in May 2020 and reflect on that as a bargain.

Painting an equally rounded picture of Saliba is a little more difficult because he just hasn’t played that much.

Off the back of 19 senior games for Saint-Étienne, and presumably a fair bit of scouting of him at youth level, we’ve committed to a €30 million signing. Granted, that will be paid in instalments, but it’s a big statement on our part.

Talking of big, at 6ft 3 inches tall he’s a physically imposing unit and you’d imagine, given he’s a teenager, that he’s still filling out. StatsBomb labels him a ‘very active’ centre-back but, like everybody else, they wonder how he’ll cope at the Emirates. To be fair, even Virgil van Dyck would have struggled to cope in some of the recent Arsenal sides.

Anyway, he’s got a year at home to iron out any flaws in his game before he leads us to Champions League glory in 2021. Explaining the decision to stay in Ligue 1 for another season, he said: “It was important first of all because I wanted to prove myself for another year at Saint-Étienne before I come to try and establish myself here at Arsenal.”

He added: “This is a big club, and when you come here, you need to be ready. So I’m going to try and have a great season with the club that developed me in order to be ready for Arsenal.”

The club’s broadcast team also tried to get him to have a cheeky dig at Sp*rs by asking why he chose to move to us even though they tried to hijack our negotiations. He played a straight bat, explaining, “Well, the history, the badge…since I was little, I’ve been watching Arsenal play in the Champions League and so on, and there are a lot of French players who have come through here.”

I think I’m right in saying that Saliba is nursing a groin injury at the moment and hasn’t yet played in pre-season. Presumably, it’s touch and go whether he’ll be in the Saint-Étienne team that faces Dijon in their Ligue 1 opener on 10th August. I wonder how much input our medical team will have if he picks up any other knocks in the future? Here’s hoping that doesn’t happen.

So a couple of deals over the line, but it’s clear that we need to do more in the final two weeks of the transfer window. As I’ve written in other pieces this week, it boils down to strengthening our backline and buying a winger. Zaha and Tierney are on pause at the moment, but I fully expect us to return with new bids for one or other of them soon.

If Raul, Vinai and Edu thought the confirmation of a couple of signings might butter up supporters before they took to the stage at the Emirates for the annual supporters’ trust Q&A, they were wrong.

After outlining their vision, the details of which they presented earlier in the summer, and introducing Edu, who confirmed he’d been in talks about the technical director role since December, things got a bit spiky when matters were opened to the floor.

To be fair, when you read Tim Stillman’s excellent write-up, it looks as though the trio did their best to directly answer the questions that meandered their way. Our budget, the quest for a centre-back and safe standing were all covered. There was a tacit admission that we will not challenge for the title this season and a call for patience in a 14-month-old project that is yet to bear fruit on the pitch.

“I get the frustration, really I do,” said Raul. “If we keep saying we are terrible we won’t get anywhere.”

“We are not where we want to be,” closed Vinai. “We know people want to see actions and not hear words, unfortunately, this is a Q & A so we can only give you words tonight.”

Right, I’m done. After a couple of weeks on duty here, I bid you farewell. Tom is going to cover the weekend shift before Blogs makes his triumphant return from the States. Thanks for putting up with me.

If you want to have a chat, you can find me on Twitter @AAllenSport.