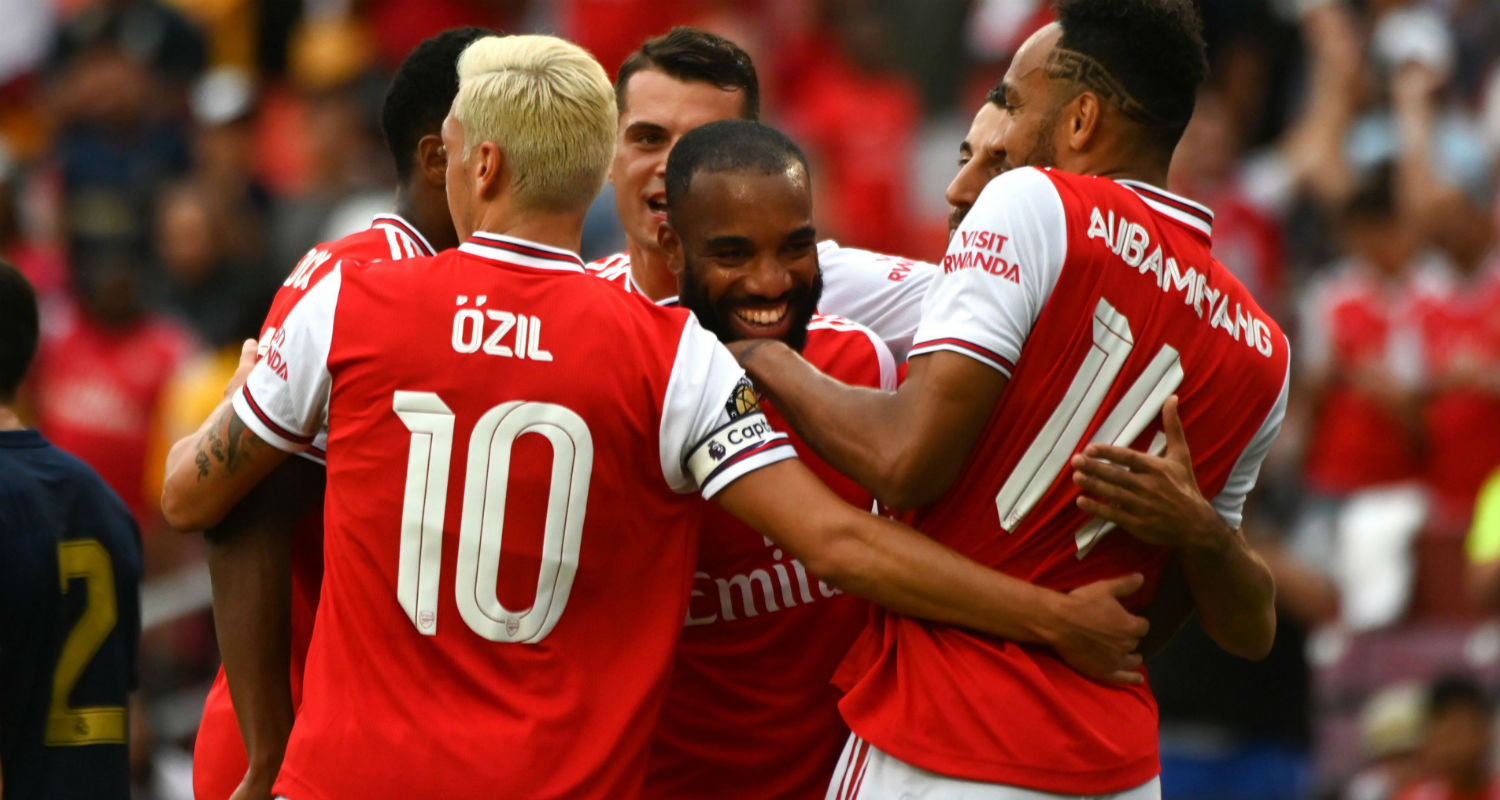 It’s a sweltering 24 degrees in London. I’m sitting in the dark watching Carl Jenkinson share a football pitch with Sergio Ramos. Arsenal are beating Real Madrid on the other side of the world. Mesut Ozil is captain. Alex Lacazette has scored a penalty off both posts. A player has been sent off for handball inside 15 minutes. Zidane has subbed a striker who didn’t even touch the ball. And honestly, having only just woken up from a nap, I can’t really tell what’s real and what’s not.

Oh. It’s 2-0 now! Aubameyang has doubled our lead. That was quite nice. Alex Lacazette set him free with a delightful one-touch flick and he took it past the keeper and just about squeezed it in. Blimey, we’re killing Madrid here.

I think we’ve annoyed Madrid. It’s all getting very tetchy on the pitch. Naturally, Sokratis is involved. Ah fuck, he’s been sent off! What is this referee doing? Has nobody told him this is a friendly? He’s just handed out two yellows to our defender inside three minutes. (He probably deserved this)

I can’t remember which of the Greek primordial deities is associated with the sky, but he or she seems very angry with that decision. Lightning is now forking the London sky. Jeez, it’s getting quite close to the massive crane on the other side of the road. I wonder what would happen if it hit it? Answers on a postcard.

We’ve made it to half time with our clean sheet intact. I guess we’ll have to bring on someone to partner Calum Chambers in the centre of defence. It’s not like we have many options.

Looks like Unai has gone for Nacho Monreal, that makes sense. Gareth Bale is coming on! WTF. I thought he was already in China?

The lightning is getting very close now. As a man in his mid-thirties, I will not allow myself to get scared by this. I’m indoors. It can’t get me. It will not get me.

Without the man advantage, we’ve dropped very deep and are really being penned in. Martinez has made a couple of great saves. Oooh. What a hit by Asensio who has crashed the ball against the post from 30-yards with his left foot. That was some hit.

Goal. Bale. Typical. The ball spills to the Welshman inside the six-yard box and he’s poked home. I shouldn’t laugh but I’ve never seen someone try not to celebrate a goal as much as he has just there.

2-2. Asensio has just polished off a cutback from Marcelo. Well this is all very Arsenal, isn’t it? Absolutely cruising and then a ridiculous collapse. We’ve barely managed to get out of our half so far in the second half. Gerry Armstrong on co-commentary is wetting himself. We’re definitely going to lose this.

We have thunder in London. And it looks like a bad injury at FedExField. Asensio, who has been sensational, is smacking the ground in pain and is being stretchered off. It looks like a very innocuous coming together with Aubameyang. I think he might have done his knee.

I wonder if Zidane will have to keep Bale now; he’s been their best player by a mile. Surely they won’t nix the Ceballos deal this late in the day? Oh god, can you imagine? That would be terrible luck for us. I knew I shouldn’t have written a draft confirmation story for Arseblog News. I’ve definitely jinxed it.

Why did I pay £11.99 to watch this game? I must remember to cancel this Premier Sports subscription in the morning.

Jenkinson has just gone head-to-head with Marcelo down the right-wing, won a corner and smirked at the Brazilian. Ah, that’s why I paid. Haha. What a hero. Add another £5 million to the Corporal’s price tag. He’s basically worth the same as Zaha now.

Nketiah, Saka, Nelson and Burton have come on. If we’re going to win this, it’ll be with the kids. What an opportunity for them.

Unbelievable! Bale has just cleared the ball off the line to deny Chambers from a corner. And Nelson has come close with a curler. Come on Arsenal!

Bale. Edge of the area. Outside of his left foot. Just wide. My goodness. You can see what he was trying to do.

How can there be this much lightning and no actual rain?

We’ve looked decent on the counter with the kids but the final ball has been lacking, Nelson, in particular, has been wasteful. At least we’re playing further up the pitch. Madrid look a bit leggy now. This doesn’t go to penalties, does it? Fucking hell, I hope not. I can’t be arsed to stay up much longer. It’s coming up to 2am now.

Oh no, Eddie! A chance to win it one-on-one with Courtois and he’s fluffed his lines. Confirmation – there will be penalties if it’s a draw. Vomit face emoji.

Eddie’s missed another one! A second in a minute, this time a header goes wide from three yards out. How has he not scored? Either win it or lose it in the four minutes of stoppage time Arsenal. I can’t be doing with pens.

Urgh. Come on, let’s hurry up and get this over and done with.

Monreal. Misses. Off the post. He looks angry about that.

Burton. He looks nervous. Misses. Over the bar.

That’s it, Madrid win on penalties. Oh well. Right, I’m going to bed. I’ll pick this up in four hours.

If you want to see the goals, check out Blogs’ match report. He was one of the 52,826 at FedExField for the game.

So what did Unai Emery make of all that? “This match was to take confidence, to play together with young players and give them chances,” he told his post-game press conference.

“The result is not important but we want to create a winning mentality. We are working and analysing each match to improve offensively and defensively. When we were playing 11 v 11 we were playing well.

“After the red, we preferred to play against 11 and asked the referee if we could play against 11 again but they didn’t support that chance. When we had some moments playing progressively 11 v 10 we were not controlling the game like we wanted.

“10 v 10 was the same situation at the beginning. We didn’t control the match, maybe because we were winning 2-0. I think we could have taken more of the ball, kept the ball with the possession. Maybe sometimes we didn’t do that but in the transition we were very strong.

“In the last minutes, the young players’ impact was amazing. This moment for them, for us, was perfect. In the transition we were very good and with the ball we created chances.”

More importantly, will Dani Ceballos still be joining Arsenal on loan now that Real Madrid appears to have lost Marco Asensio to injury?

Zidane has confirmed it looks like a bad one. “He’s worried, it’s the knee,” he told Mundo Deportivo. “He went straight to the hospital to do tests. We are worried and touched because it looks bad.”

Emery didn’t sound too sure. “I don’t know [if it affects the deal],” he said. “Our target also was not to take injuries in that match, and they maybe have with Asensio. It [could be] bad news, for them and also for us. I don’t know if it can change something.”

Having given up on signing Kieran Tierney, to see the Ceballos deal collapse like this would be shit. The transfer window closes in 16 days.

In better news, I’m pleased to report the crane survived. Until tomorrow.