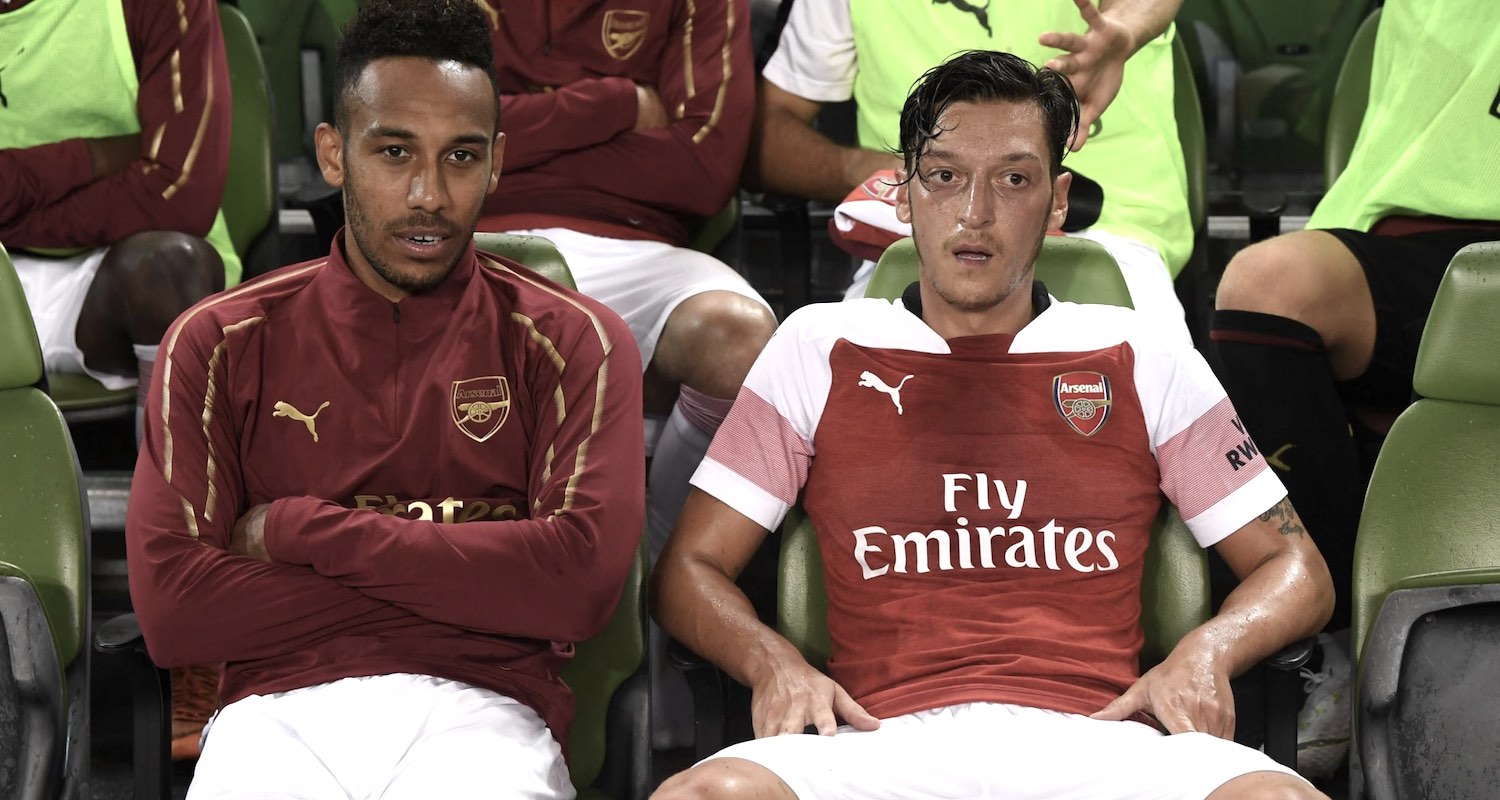 It’s time for part two of our summer rebuild posts. Yesterday focused on goalkeeper and defence, today we’re going to look at midfield and attack. I guess there’s no need to fanny around, so let’s get straight into it.

Right now, the only two midfielders I’m 100% sure will be Arsenal players next season are Lucas Torreira and Matteo Guendouzi. The pair signed last summer, and there’s just no way that either of them will be going anywhere this year. There are question marks of various sizes over the otherS though.

Aaron Ramsey is already gone (for free, argh) so he’s got to be replaced. Mohamed Elneny played just 379 minutes of Premier League football, starting just twice and playing 90 minutes on one single occasion – and that was the final game of the season against Burnley. It’s not unreasonable to suggest he’s a player that Unai Emery has no great fondness for, and as such his departure this summer would not be any kind of surprise. The volume of work we need to do and the amount of changes we need to make might see him stay as a kind of experienced back-up option, but that’s all he would be.

Then we come to Granit Xhaka, and yesterday there were stories linking him with a move to Inter Milan. There was also a story where he said he’d be honoured to be Arsenal captain next season if it were offered to him, so it’s hard to say what could happen here. Again, coming back to the volume of business that we need to do, we’ve got to maintain some continuity, and he seems an easy enough guy to keep. He has his dodgy moments, but generally he’s all right. Which I know isn’t exactly a ringing endorsement, but it is what it is.

I don’t think he’s our most pressing issue, not by a long shot, but at the same time you could make a very good case for him to move on too. He’s been here since 2016, he’s now three years into a five year deal, and it’s stick or twist time. Remember Raul Sanllehi talking about how they won’t allow players to leave for free, the way we’ve just seen Ramsey and Danny Welbeck go? With two years left on a player’s contract you have to make a decision. Do you extend, or do you sell? That’s where we are with Xhaka right now.

“I do believe that a player’s contract should never go to the last year, as a policy,” said Sanllehi, so they now are in a position where they either offer Xhaka new terms or they pull the trigger. If we don’t see him as the man for the long-term, now is the right time to cash in. Not with 12 months left on his deal because you get less, and of course you also run the risk of the player sitting in for the final year of his deal and leaving on a Bosman. He’s also one of the only players in the squad who would generate a reasonable transfer fee which could then be reinvested. So, as much as keeping him makes some sense in the wider context of summer business, he’s almost like a test case as to how serious we are about changing the way we operate in the transfer market. One to keep an eye on.

Update: Thanks to @Stevo_V and @@vivekmenon1990 for reminding me of the fact Xhaka signed a new deal last summer, and thus his situation becomes much less pressing. I’d say it makes a stay far more likely, even if from a footballing point of view he’s at a point where you could easily choose to go in a different direction.

From the academy, the stand-out prospect for a promotion is Joe Willock who has featured in the first team at various times over the last two seasons. I suspect he’ll be given a chance, but it’ll be interesting to see in exactly what role. He’s generally been used ahead of the deeper-lying midfielders, so that kind of brings us to …

We all know who the £350,000 a week elephant in the room is. At this point it feels like there’s just too much baggage with Mesut Ozil for any other sensible outcome than a departure. Booed off the pitch in the Europa League final by the away fans, his season has been dreadful by his own standards. The question people ponder is whether this is a player who is suffering because he’s unsuitable to the way the current coach plays, or one who is in sharp decline? It could well be a bit of both, but since penning his new deal in January 2018 this creative force has made just four assists for the club, and that spans both Wenger and Emery’s time at the club.

There are concerns about commitment and behaviour, and it feels like we’ve reached a tipping point with him now. Another season of back injuries, illness, under-performance and an inability to play games away from home because it’s considered too tough for him is no good for anyone – not for the player, but especially not the club. You can’t escape the salary, we can’t pay that kind of money for such little return, and the only sensible course of action is to move him on.

That, however, is easier said than done. Finding someone to pick up that salary will be tremendously difficult, and I wouldn’t be at all surprised if he went on loan somewhere with Arsenal still paying a substantial part of his wages every week. We could also incentivise a permanent move with a big pay-off and a gold carriage clock/Playstation controller, but whatever happens they have a big decision to make and a lot of work to do here.

Henrikh Mkhitaryan is overpaid and also under-performs based on the level of his salary, but he seems to fit Emery’s philosophy and with everything else we need to do, I don’t think his departure is a priority this summer. Alex Iwobi stays, and then I think there might well be an injection of young talent into this area of the team, rather than an established signing.

We have Reiss Nelson coming back from a pretty decent loan spell at Hoffenheim ready to challenge for a first team spot. At Academy level Emile Smith Rowe, Bukayo Saka and Xavier Amaechi are chomping at the bit for some first team football, and our Europa League approach ought to see them get chances to convince the coach that they’re ready. These are young men with options too, clubs across Europe are after them and ready to offer them good deals with progression plans for their future, so if we believe in their talent and potential then we need to demonstrate that to them or we’ll lose them.

There’s also the young Brazilian, Gabriel Martinelli, who is widely expected to join us this month. He has described himself as an ‘attacker’ rather than a centre-forward, and a place on the left or right of a front three would suit him as and when he’s deemed ready to play first team football. Could we do with an addition with more experience? Absolutely. We had our eyes on Zaha, and the talk about Ryan Fraser continues, so they seem open to an addition via the market too, even if the Bournemouth man would be a fairly underwhelming addition for me.

It became increasingly apparent over the course of the season that the best thing about our team was the two men we have up top: Pierre-Emerick Aubameyang and Alexandre Lacazette. They scored 50 goals between them (31 and 19 respectively), and the fact that the Frenchman finished as our top assist maker tells you about the impact he had beyond scoring.

It feels counter-intuitive to say anything other than keep them both at all costs, and that’s my default position really, but I’m not 100% sure it’s that simple. What we want to do is one thing, what they might want another entirely. Aubameyang will be 30 on June 18th but until then remains 29, while Lacazette has just gone 28. Two players more or less in the prime of their careers, with their stock as high as it ever has been, do they want to play another season of Europa League football?

Our absence from the Champions League makes alternative destinations far more attractive to them, no question about it. Already Lacazette has been linked with Barcelona, while Chinese clubs are apparently circling around Aubameyang – although I take most rumours from that part of the world with a bigger pinch of salt than most everywhere else.

I’d imagine someone is going to test our resolve with at least one of them, so it remains to be seen how committed we are to keeping them. You’d have serious questions about our ambition if we sold, but then again if a big offer came in which gave us more spending power and a chance to reinvest you can see some logic in that. The issue for me is it would be like taking a leap of faith because we just don’t know how well we’d replace them under this current recruitment set-up which is, since the departure of Sven Mislintat, less coherent than it should be.

If it was a straight choice, I think I’d be more inclined to sell Lacazette than Aubameyang. It’s not to say I don’t like him, I do and I think he’s been fantastic for us this season, but he’d potentially generate more revenue because of his age, and if we want a straight-up goalscorer up front next season then I think Aubameyang edges it. Yes, he misses some chances, but he’s consistently scored a higher rate and that gives him the edge. To reiterate though, I’d be far more inclined to keep both than to sanction any kind of sale.

As for who backs them up, Welbeck is gone so we lose a striker and a wide forward option, and it feels like Eddie Nketiah might need a loan move. It’s either that, or we show some faith in him and give him proper minutes in the Europa League and cup competitions. Could we make a signing? Potentially, but it’s hard to know what kind of player we’re going to attract anyway. After investing £100m in strikers in the last two years, I don’t think they’ll be minded to spend anything significant here unless one of the main men is sold.

So that concludes our look at where/how we need to rebuild this summer. My overwhelming takeaway is that we’re going to need Raul Sanllehi, and to a lesser extent Vinai Venkatesham, to be pretty amazing at their jobs. It is their first summer in charge, so while I harbour some doubts about their ability to be that good, they deserve a chance to back up all the talk with actions that we can all get behind. Let’s see what they can do.

For some extra reading this morning, Lewis Ambrose has written an excellent tactical summation of Unai Emery’s first season in charge, so that’s well worth your time.

More from me tomorrow, until then have a good one.