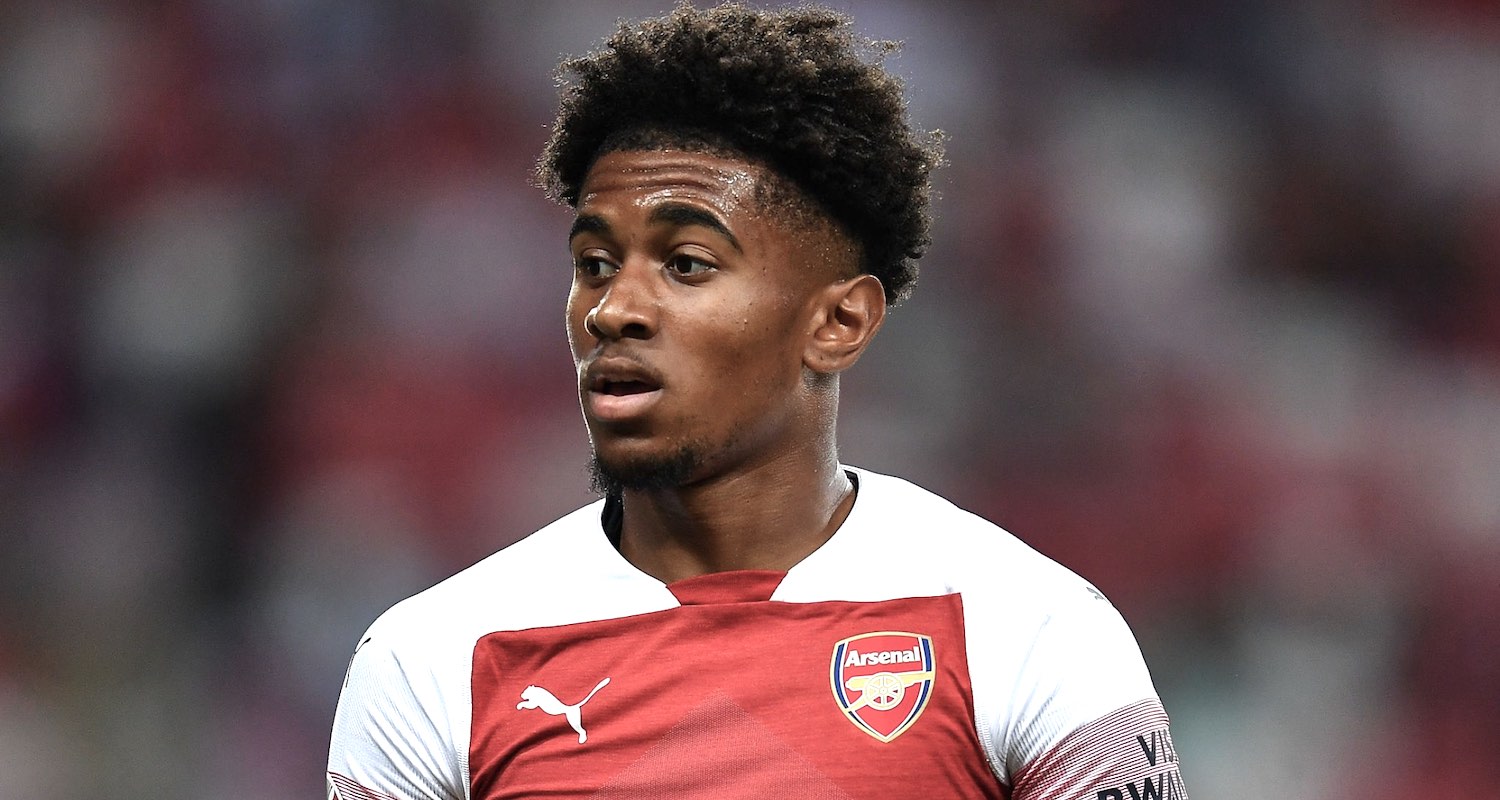 A couple of years ago I was at Members Day, the team trained on the Emirates pitch, played some small-sized games, and Reiss Nelson scored a goal which did the rounds on social media. It looked good from the stands, but you had to see the video to see just how clever it was. You can see it in the video below, starting at about 2’36:

It’s the kind of thing players do in training far more often than they do in matches, but it was a little showcase of his talent. That season he played 16 times for us, making his debut in the Community Shield, and playing regularly enough in the Europa League. Arsene Wenger’s decision to use a back three meant he needed wing-backs more than he needed wide forwards, so Nelson was primarily used there.

It didn’t really get the best out of him, it has to be said, but it did give him game time and experience. Towards the end of the season, when it became clear that we were not going to finish any higher or lower than 6th, he started a couple of Premier League games – at home in a 3-2 win against Southampton and away at Old Trafford where we lost 2-1.

Last season he was sent on loan to Hoffenheim where an early goal scoring spree had people clamouring for his immediate return. He bagged 6 goals in his first 7 games, a fantastic return for a young player in a new league, but throughout his season in the Bundesliga, Hoffenheim boss Julian Nagelsmann was keen to keep his feet on the ground. In October, after he’d scored two against Nuremburg, he said of the Arsenal youngster:

We must be mindful. Nelson’s scored goals, two very important ones against Nuremberg, but he’s also had bad games. He needs to grow healthily. It’s like in music – one song puts bread on the table but only for a few weeks.

It’s not about being a one-hit wonder, but about delivering good performances over a long period of time. Being the best over 15 years. Be careful when evaluating him. Let him grow in peace and don’t get into his head. It’s not easy to keep your feet on the ground at 18.

He scored two more before the end of November, but then went on a dry spell which lasted until April. He didn’t start a game between December and the end of the season. In March he was disciplined and left out of the squad in what Nagelsmann described as an ‘educational measure’. All of which is fantastic in my opinion. Not that he did something which required disciplinary measures, but because it’s part of the learning experience that young players really need.

You can see it with certain players at other clubs who have made a breakthrough but not had that kind of grounding. They can sort of get carried away with themselves, and think they’ve achieved more than they actually have. To be taught lessons at an early age about how you need to behave every single day in training, how committed you need to be, and ultimately how that can impact on you getting picked for the team or not is a positive thing.

Another interesting aspect of Nelson’s time away was the fact he was in regular contact with Academy Manager Per Mertesacker. In Match, Nelson spoke about it:

“He’s just been very direct with me,” he said. “He’s telling me, ‘Reiss, it’s not always about football, sometimes it’s about what happens off the pitch. ‘You’re learning a new language, new environment, and it’s all going well, just keep up with your performances and no matter the game time you get, you’ve taken the challenge to do that so well done.’”

We’ve sent lots of players out on loan in the past, many of them prospects we have high hopes for, but more than any other I can think of, there seems to have been a really hands-on approach to how we’ve managed Reiss Nelson. The move to Hoffenheim in itself was well thought out. Playing regularly in one of Europe’s biggest leagues with a good man manager and tactician was as ideal a destination as you can think of for a player with real potential.

The fact that his season has had highs and lows, and there was a fairly uncompromising approach to his development from Nagelsmann can only stand him in good stead. And now, after scoring for England U21s this week he’ll take a break, and hopefully come back to stake his claim for a first team spot with us next season. This is what that loan move was about, to get him ready for the Premier League, and he feels that his spell in Germany has been beneficial:

I learned a lot of stuff. I made a lot of friends, and also I made a good connection with the managers. They taught me a lot of stuff that I can take on in my career. It was difficult, leaving, but Arsenal are my team and I want to go back to Arsenal and play.

I am Arsenal through and through.

We’ve heard from the people running the club that there’s going to be an increased focus on bringing our talented young players through – whether that’s because they’re so good or because it’s the most ‘financially efficient’ way of doing it is another debate – but Nelson is the one that seems most ready for regular first team football next season. He has gone away, had a fantastic learning experience at Hoffenheim, and returns a better player and more physically mature – which is an important thing at Premier League level.

The promotion of Freddie Ljungberg to the first team coaching staff is another sign that we’re ready to give youth a chance. Ironically, Nelson didn’t work under Freddie, but his season on loan in Germany feels like the kind of sensible career development plan that could benefit the first team squad next season. The other side of this is that, by the sounds of it, we’re probably going to give some young players a chance next season who haven’t had that step and are still very raw, but as I’ve written here before, the Europa League group stages and the League Cup are a great opportunity to let them play. Come the second half of the season, I suspect we’ll see a few of them go out on loan.

Having lost Danny Welbeck, with our full back positions problematic as it stands, and with the likes of Alex Iwobi and Henrikh Mkhitaryan being asked to do jobs in wide areas that they’re not 100% suited to, there’s a gap in this squad for a player with the qualities of Reiss Nelson. He’s an Arsenal lad, he’s keen to make his mark, and there’s an obvious way to give him an opportunity to take another step forward in his career.

Let’s hope he can do just that.