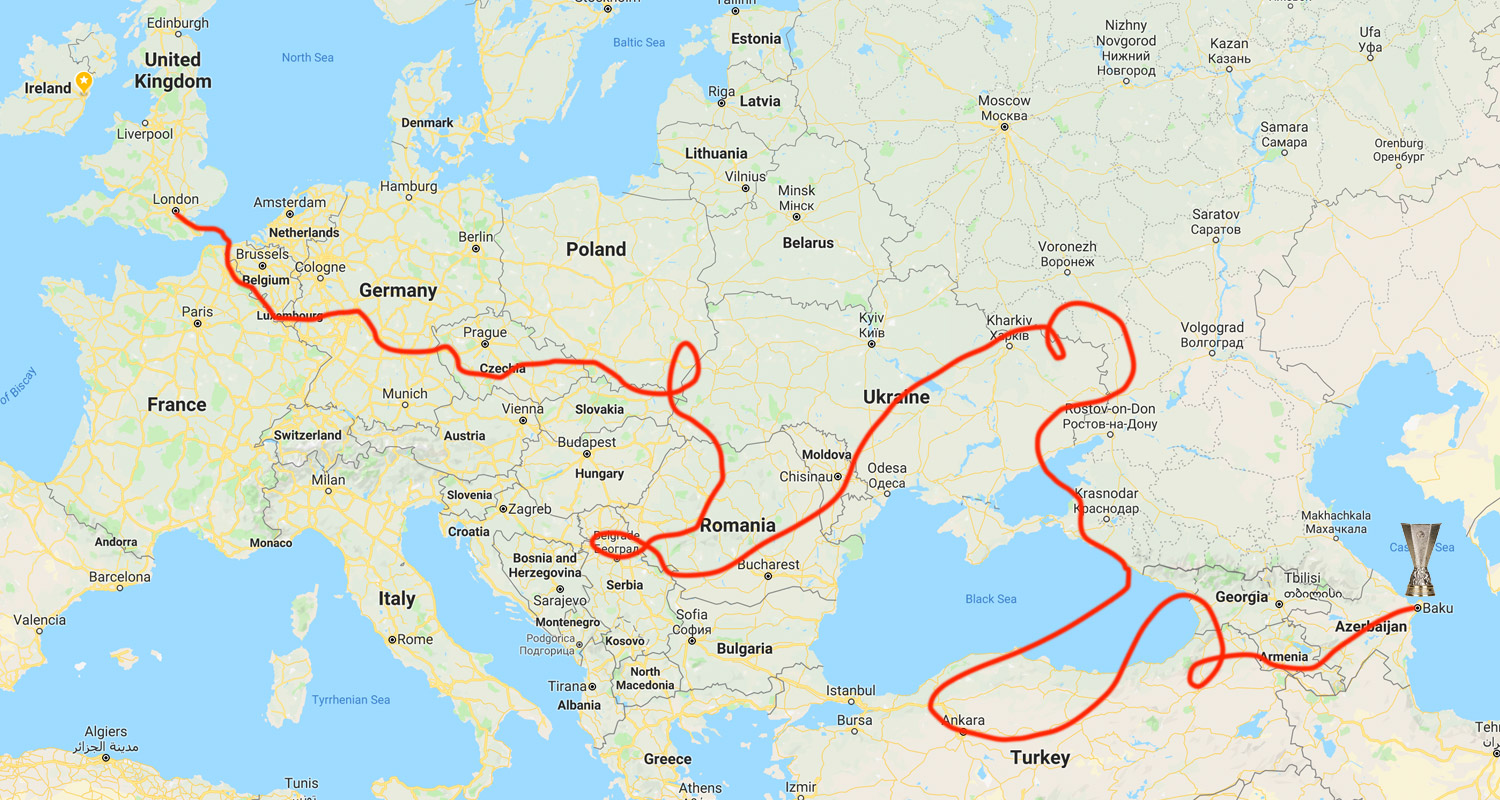 My mouth is dry, my head is pounding and my attempt to bleach the memory of yesterday evening with alcohol has failed, as it always does. I have merely added physical nausea to the grinding disappointment that was Arsenal’s characteristic capitulation in Baku. As an experience, this was already the worst final I had ever attended before the team intervened with their usual brand of fuckwittery.

And now my complaints about the Olympic Stadium in Baku as a venue for a match like this will be mixed with a large bunch of sour grapes (as well as several litres of Efes). Frustration began to build during Wednesday having just about had my fill of taxi drivers who don’t seem to know where even the most obvious monument in this city actually is.

After a pleasant lunch we tried to do a dry run to the stadium to get our bearings and it was all a bit chaotic in truth as, again, the taxi driver didn’t seem to know where the stadium was. The stadium itself is buried in the middle of the motorway. There were lots of pleasant enough staff on hand, but it soon became apparent on the slightest inquiry that very few of them were actually able to distribute any useful information.

This was, broadly speaking, the theme of the day’s exchanges. We headed a few stops back towards town on the metro to settle in for a few pre-match beers and resolved to leave early for the stadium given the difficulty of access and the lack of assistance on hand. Upon arriving at the metro station close to the stadium it was very apparent that the fans of each club were not even an afterthought. This was an ‘experience’ designed entirely for neutrals.

The Arsenal and Chelsea fans were hived off into the corners of the ground in the worst seats, the furthest away from the stadium’s access and egress points. There was no signage for either set of fans upon arrival and it’s a bit of an odyssey getting to the turnstiles as it is. Inside the stadium, the large rows of empty seats were obvious and the atmosphere was one of a semi engaged ‘audience.’

The chant felt defiant and glorious. I am certainly reading too much into it, but it felt almost like a protest chant. Despite all of the obstacles placed in front of us, despite the really obvious fact that UEFA expressly did not want us here, here we were anyway. As kickoff loomed, I was soaked in beer and didn’t mind one bit. This was the first time that this game felt like something that belonged to us, the fans too and not just an excuse for UEFA to thump its huge post-colonial cock rhythmically into its palm.

The sense of solidarity was palpable. Earlier in the day, I had spoken to a fair few Chelsea fans in the city who had also made the journey. ‘Usually I fucking hate Arsenal,’ one of them said to me, ‘but today, what’s the fucking point, eh?’ Amen to that. Then the game happened and the atmosphere fell flat and the resentment began to build again as we peeled away from the stadium, unsuccessfully trying to decipher from UEFA’s team of ‘helpers’ where the buses they had laid on were actually going.

We clambered aboard a bus and made our way back to the bar we had frequented pre-game and tried to wipe it all from our memories with the local brew. All in all, this trip has been a fairly sobering glimpse into football’s future and it’s clear that I don’t really want any part of it. And don’t cry for me Argentina and all that. The world changes, life changes and you get to an age where you realise that you are not the centre of the universe.

In many ways Arsenal’s performance was a perfect encapsulation of this ‘experience’, it was disengaging, something that felt like an imperceptible dot on the horizon, a vague concept dreamed up by a marketing department. Honestly, some of those Arsenal players might as well have been filming a commercial for football as opposed to playing in a meaningful competitive final. It’s increasingly unclear what Arsenal are trying to do – on and off the pitch. The football club has become a mannequin.

Our absentee owner made his feelings (or lack thereof) about this ‘occasion’ clear given that he couldn’t even be bothered to show up. I haven’t watched the interview with Vinai and Raul on arsenal.com yet because, what’s the fucking point? I don’t need vision statements and strap lines, I am not especially keen on being lied to about how ambitious everyone is for this club because I can see it’s not true. I can see it when the owner won’t even climb aboard the gravy train for a free meal ticket in Azerbaijan. He is, like his team, actively inactive and I don’t need or want to be lied to about it.

But we’ll always have those 30 minutes in the concourse before the game where the beer rained from the sky and we leaped and sang with our arms around each other. When we forcefully made this ‘occasion’ belong to us for a little while. We’re the Arsenal, we’re the fucking Arsenal and now we go our separate ways for the summer, shake off our hangovers and ponder whether it was really all worth while.