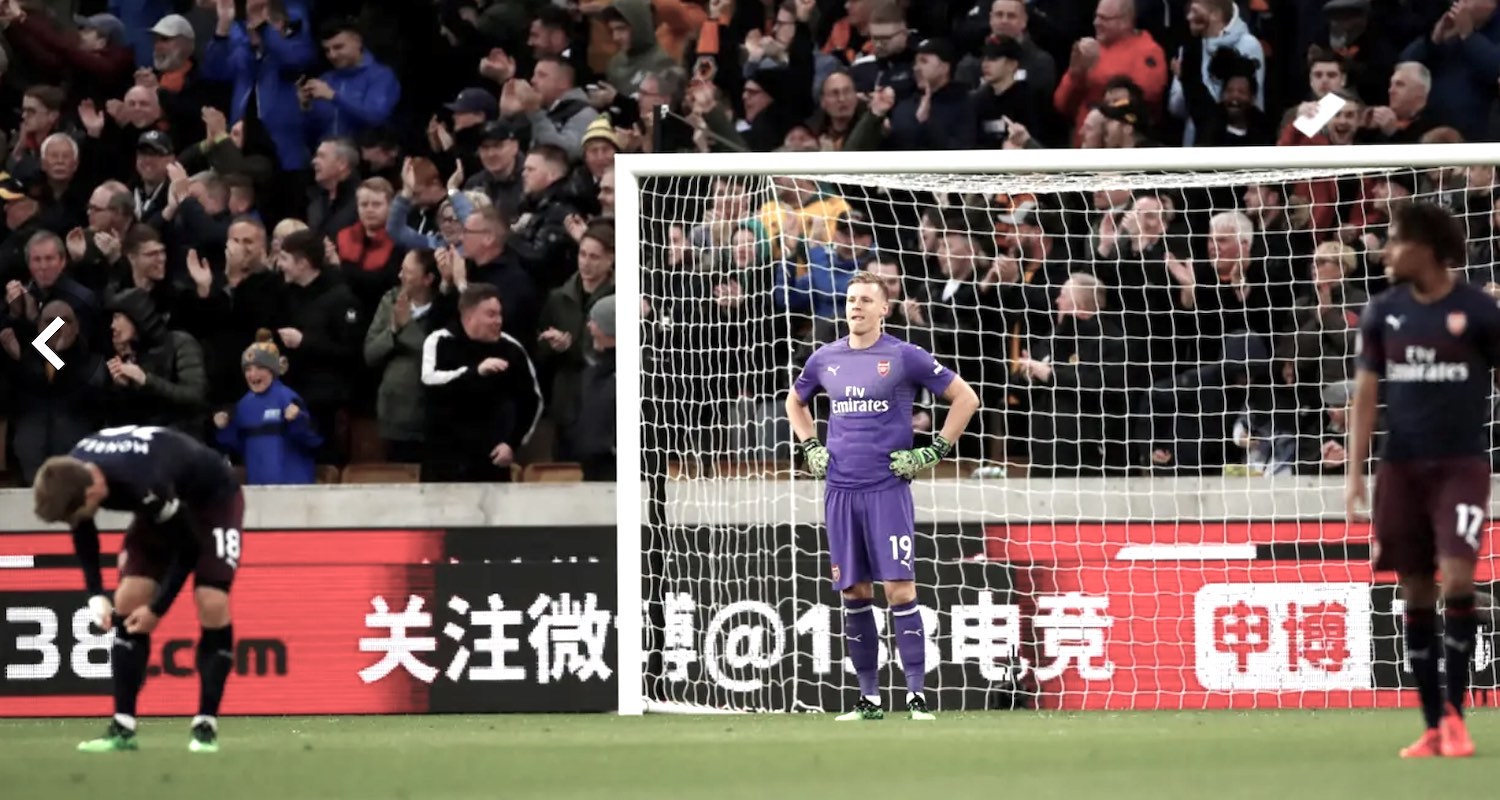 Here’s a stat for you. Points won by Arsenal this season away from home in a game in which the opposition score first – 1. That was in the 2-2 draw with Crystal Palace at Selhurst Park in October. A game in which we actually went ahead but dropped two points by conceding the second of two stupid penalties.

So, it was no surprise that when Wolves went ahead last night via an excellent free kick from Ruben Neveus, we took nothing from last night’s game. In fact, the minute that goal went in, this team crumbled. Less than ten minutes later we were 2-0 down, and by half-time it was 3-0 and that, ladies and gentlemen, was most definitely that. There wasn’t a single part of me that believed we could turn it around, Wolves held us at bay like a giant man with his arm on the head of a child who is windmilling pitifully weak punches in the air, and six points dropped in three days means our chances of finishing in the top four are now extremely slim.

It’s a sign of how crazy this season is that it’s not impossible but it requires us to win two away games, and I don’t think we have the character do it. Not on the pitch, nor off it where questions have to be asked about Unai Emery’s ability to address a huge flaw within this team. To be fair to him, he picked an attacking line, a back four, three attacking midfielders behind a striker, and two central midfielders capable of more than sideways passing. It’s what I wanted to see, but then I wonder why we weren’t this ‘brave’ at home against Crystal Palace and a bit more circumspect away from home at a team which has had an excellent season. Win the first one, dig out a draw last night and we’d currently be sitting on 70 points, three clear of Chelsea. I appreciate there were injury worries and that hindsight is a wonderful thing, but hindsight also shines a light on what’s come before.

For all that, I thought we started well, controlled the game with possession much better than usually do away and I think that’s because these players are more comfortable with a back four. The problem was we didn’t manage to do a lot with it. I don’t think their keeper had a save to make, and little by little they got into the game. There was a directness and purpose about the way they drove at us when they had the ball, and when Monreal committed a foul outside the box, Neves took the free kick, dipping it over a half-hearted wall and beyond Leno.

The second goal: for a manager who treats us week in week out to a series of short corner routines which vary in both complexity and craposity, it’s a bit of a blot on his copybook that he doesn’t have a team prepared well enough to deal with the opposition doing the same thing. There was nothing elaborate or complicated about what Wolves did, they saw they had a two on one, eventually Ozil noticed and ambled over but by then the cross had come in, Leno came and got nowhere near it, and Doherty headed the home side further in front.

Then, just before the break, the Arsenal midfield played a game of who could take least responsibility for a bouncing ball. Xhaka sort of played it towards Mkhitaryan who looked like a football was the last thing he wanted in his life, the impressive Diogo Jota drove towards goal leaving the Armenian for dust, and his shot squirmed under Leno who chose a bad day to have his worst performance of the season. 3-0.

There’s not much point in even talking about the second half or the Sokratis goal which had to come from a set-piece because we created almost nothing from open play. And what more can we saw about this team and it’s miserable away record? I know people scoff when I talk about a lack of character, but it’s as plain as day this is a fundamental issue. As soon as things start to go wrong, we have no way of turning it around. That stat at the beginning of the blog tells you exactly that. Unless it goes according to the script, we’re done for. We have no ability to react, to improvise, and we don’t have the individuals to show the kind of leadership and determination required, nor the collective will to do anything other than go through the motions.

Look at that team and ask yourself who you’d want with you if there was a sporting fight? Our two veteran centre-halves, Lacazette who will do his best, and maybe Torreira. After that? Mkhitaryan and Ozil flit about earning over a half a million pounds a week between them and what to do they give you away from home? Reasonable passing stats? Lots of touches of the ball? Not much else. It’s just not good enough.

Some will point to Leno and suggest the keeper played a big part, and that’s true. He had a stinker, but there’s always someone or something when we play away from home. Conceding a stupid penalty, a defender switching off, a goalkeeping mistake, a team caught on the counter attack with too many men forward – whatever it is we need to do make a mess of the game, we’ll find a way to do it. I’ve said it before, and I’ll say it again, we have talented players but we have an absolute dearth of character. There are too many weak-minded individuals in this team and until such time as we move them on and replace them we will make no improvement.

These Goldilocks footballers who can do it when everything is ‘juuuuuust right’ cost us points time and time again when our Premier League porridge is a little too hot, a little too cold, too lumpy, not lumpy enough, too sweet, or whatever else. How much more evidence does anyone need?

While it remains possible mathematically to finish in the four, I don’t think we will. I had real doubts coming into this game because a team that can lose the way we did at home to Crystal Palace was always capable of something like this away at Wolves. And for all the credit Emery earned for putting us in a position where we could have gone above Sp*rs with a win on Sunday, he’s got to take responsibility for his team blowing it this week, taking zero points from two games which, on paper at least, you could reasonably expect Arsenal Football Club to take a decent return from.

I absolutely take on board the fact he’s lost two very good players to long-term injury, but the Spaniard has not improved us defensively at all this season – as this from @Orbinho illustrates. I don’t think flitting between different systems week to week, game to game, has helped in that regard, and as the season has gone on, we’ve looked less and less like a team that has a cohesive attacking strategy. We can look at the players, and there’s no question that there’s a ruthlessness needed when it comes to rebuilding this squad. I look at it, look at those names, and there are very few I would have any problem with letting go at this point.

However, regardless of that, or any other mitigating circumstances you want to throw out, Emery’s job is to get results and we can’t ignore that away from home – and this week when the pressure of opportunity was part of the equation – he hasn’t done that. We’ll now hear the same platitudes about how we need to respond and show our personality. Do we even have one? We’re like a beaten dog on the road. Then we go to Leicester on Sunday and I worry more about which new and unique way we’ll find to lose another away game rather than consider how we might win it.

There is, of course, still the possibility of Arsenal ending this season with a European trophy. The best Europa League manager in history could add to his tally of successes in this competition, and then that would transform Arsenal into a Champions League club again. By any measure it’d be great way to end a frustrating campaign.

But, I have this gnawing feeling deep within me that something’s horribly wrong with this football club. From KSE’s wretched ownership and lack of backing, our recruitment issues (we still don’t have a head of recruitment and it’s nearly May), a squad that’s imbalanced with overpaid players whose age profiles make moving them on very difficult, administrators and officials who we have to place blind faith in but without any real knowledge of their competence, and a manager who seems like a decent and honest man but who doesn’t exactly inspire huge confidence, I’m struggling to be optimistic.

Maybe – and I really, really hope this is the case – that it’s just a bleak morning after another poxy performance and defeat on the road, and I’m just a bit weighed down by it all, but it feels like we’re running to stand still at times, and when we run out of energy there’s only one direction we can go in.